Tempe campus
ASU's biosafety officer says the field is "evolving at a breakneck speed."
ASU's David Gillum on the importance of biosecurity.
February 27, 2017

David Gillum was recently honored with a trip to Spain, was only biosafety officer from North America invited to event

In the high-risk field of human health, biosafety is of the utmost importance. A failure to follow proper protocols can lead to fatal biological hazards, and no one knows this better than Arizona State University’s David Gillum.

Gillum is the associate director of Environmental Health and Safety at ASU, meaning he oversees the university's Biosafety and Biosecurity program.

He is a pioneer in his field, having co-founded and served in leadership positions in the Arizona Biosafety Alliance. He was most recently invited to the International Genetically Engineering Machine (iGEM) Foundation safety and security meeting, which is held in Granada, Spain. Gillum was the only biosafety officer from North America invited to the event.

Gillum recently discussed the biosecurity field and his trip to Spain with ASU Now:

Question: How often do changes in biosecurity need to be made? Is this a field where everything is constantly changing?

A: The field of biosecurity is evolving at a breakneck speed. And not to put too fine of a point on it, but the projects being submitted to iGEM are called “bleeding edge” as opposed to cutting edge. We see things there that will be coming to many colleges and universities in the United States in the next year. It’s a preview of what’s to come.

With new emerging technologies that allow for extremely rapid genome editing and novel synthetic biological systems, the focus of biosafety is shifting to biosecurity to prevent accidental releases that can have a profound impact on living organisms, public health, as well as potential acts of bioterrorism.

Q: How did the trip to Spain come about and what are you doing over there?

A: I was invited to attend the meeting in Spain because I have over 15 years of experience in biosafety and biosecurity at academic research institutions. I have also developed a strong working relationship with the team that evaluates safety and security at iGEM, attending the closed-door safety and security meetings in Boston during the iGEM Jamboree for the past two years. I served as a judge at the 2016 iGEM Jamboree and witnessed first-hand how difficult it is to assess the safety and security concerns for projects coming from different countries around the globe.

Q: What were some of those safety and security concerns, specifically?

A: One of the challenges with iGEM has to do with the Registry of Standard Biological Parts and the organisms being used in the projects, as there are more than 20,000 documented parts in the registry. Students modify the parts to create new biological tools or systems and when a new part is created, a safety check must be performed to make sure it doesn’t contain a banned part.

For example, the parts must not contain genetic information that codes for highly pathogenic organisms or extremely toxic agents, such as those regulated by the CDC and USDA in the United States. There is another concern that a team could potentially conduct a non-approved release of their experiment, or worse, the release of a gene drive experiment into the surrounding environment.

Q: You're now the treasurer of the Arizona Biosafety Alliance. How much stronger has biosecurity in the state gotten since you took over. What kind of changes (if any) were made?

A: I co-founded the Arizona Biosafety Alliance in 2012 and served as president in 2013. I then served as treasurer in 2016. I created the organization because I saw that there was a gap in networking and training opportunities for people who perform safety duties at institutions in Arizona. It is difficult to say how much stronger biosecurity is in the state but there are now more than 35 people in Arizona who can network and discuss challenging situations at their own organization, and discuss the best way to deal with it.

Q: What made you want to start the Arizona Biosafety Alliance?

A: I wanted to give other biosafety and biosecurity professionals in Arizona a place to network and a safe space to be able to meet to discuss sensitive issues happening at their respective institutions. We have found that many people face the same challenges and when one person has found a solution to a difficult problem, they are often more than willing to share their experiences with another, so that they may learn from it and also not have to reinvent the wheel.

ASU Insight: Can Democracy Survive? Only If Investigative Journalism Does

"Must See Mondays"Monday, February 27, 2017Reynolds Visiting Professor Walter V. Robinson, editor at large at The Boston Globe who led the award-winning “Spotlight” investigation, explores the past, present and future of investigative journalism.During 34 years at the Globe, Robinson spent seven years at the helm of the Spotlight Team, which won the 2003 Pulitzer Prize for Public Service for i...

ASU Insight: Can Democracy Survive? Only If Investigative Journalism Does 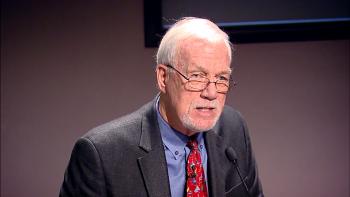 Reynolds Visiting Professor Walter V. Robinson, editor at large at The Boston Globe who led the award-winning “Spotlight” investigation, explores the past, present and future of investigative journalism.

During 34 years at the Globe, Robinson spent seven years at the helm of the Spotlight Team, which won the 2003 Pulitzer Prize for Public Service for its comprehensive investigation into sexual abuse by Catholic priests. The investigation, which exposed a decades-long cover-up that shielded the crimes of nearly 250 priests, was made into the film “Spotlight,” which won 2015 Academy Awards for Best Picture and Best Original Screenplay.

This talk was part of the Paul J. Schatt Memorial Lecture, an annual event held at the Cronkite School in honor of the longtime Arizona Republic editor who taught journalism at ASU for more than 30 years.