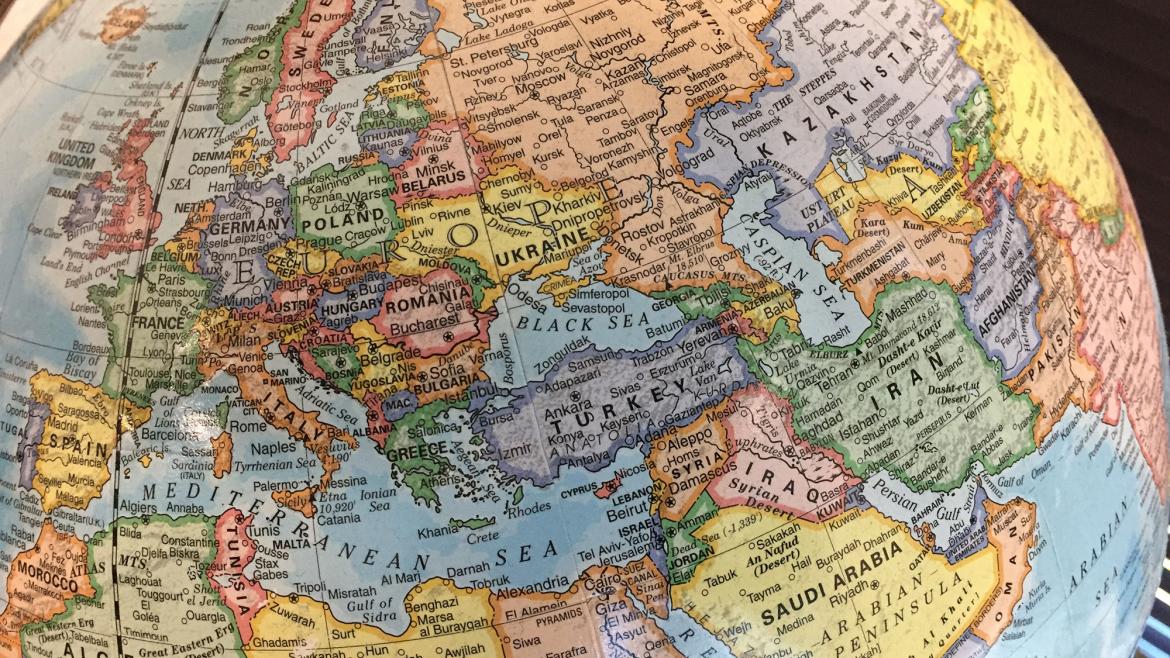 Arizona State University is one of the top producers of prestigious Fulbright scholars among research institutions for 2016-17, coming in at No. 6 for awards to faculty members, according to newly released rankings.

“Part of the university’s mission is to engage with people and issues globally, and Fulbright scholars are the embodiment of that,” said Mark Searle, ASU’s executive vice president and university provost. “The exchange of knowledge and interest benefits the scholar as well as the community abroad, and it brings ASU’s academic rigor and innovation to the world stage.”

ASU’s 15 Fulbright students are abroad now, and the university has 29 students who recently were named semifinalists for next year’s awards.

“Year in and year out, ASU has been a consistent presence on the Fulbright ‘Top Producers’ list, which is a testament to our commitment to global engagement, service and leadership,” said Kyle Mox, who is director of the Lorraine W. Frank Office of National Scholarships Advisement at ASU and the coordinator of the Fulbright program for ASU students.

“But given the recent growth and development of the university, there is considerable untapped potential at ASU. With the high quality of our international programs and our students’ commitment to leadership and service, I look forward to seeing up to double the number of applicants in the coming years.”

The Fulbright program, created in 1946 to increase mutual understanding between Americans and the people of other countries, provides the opportunity to study, teach and conduct research abroad. The program awards about 1,900 grants annually in all fields of study and operates in more than 160 countries. The sponsor is the U.S. Department of State's Bureau of Educational and Cultural Affairs. Top-producing institutions are highlighted annually in the Chronicle of Higher Education.

The student awards are for academic research or a position as an English teaching assistant. In addition, some 4,000 new foreign Fulbright students and scholars come to the U.S. annually to study for graduate degrees, conduct research and teach foreign languages.

The 21 faculty and students from ASU are currently studying and teaching in countries around the world including Vietnam, Germany, Kazakhstan and South Africa. They include Stephen Doig, a professor in the Walter Cronkite School of Journalism and Mass Communication, who is a lecturer on social science tools for journalism at Masaryk University in the Czech Republic, and Elise Alonzi, a doctoral student in the School of Evolution and Social Change, who is studying archeology in Ireland.

On March 21, ASU will hold a “Fulbright Day” at the Memorial Union in Tempe at 3 p.m., in which representatives from Fulbright will describe the program and answer questions.

If you think opera is an acquired taste, think again. ASU’s Lyric Opera Theatre says a new production of “The Magic Flute” is perfect for the novice palate.“Most people hear the word ‘opera,’ and they get scared. The perception of opera is that it is sung by stuffy people with horns on their head that stand on stage and sing at people,” said Dale Dreyfoos, stage director and associat... 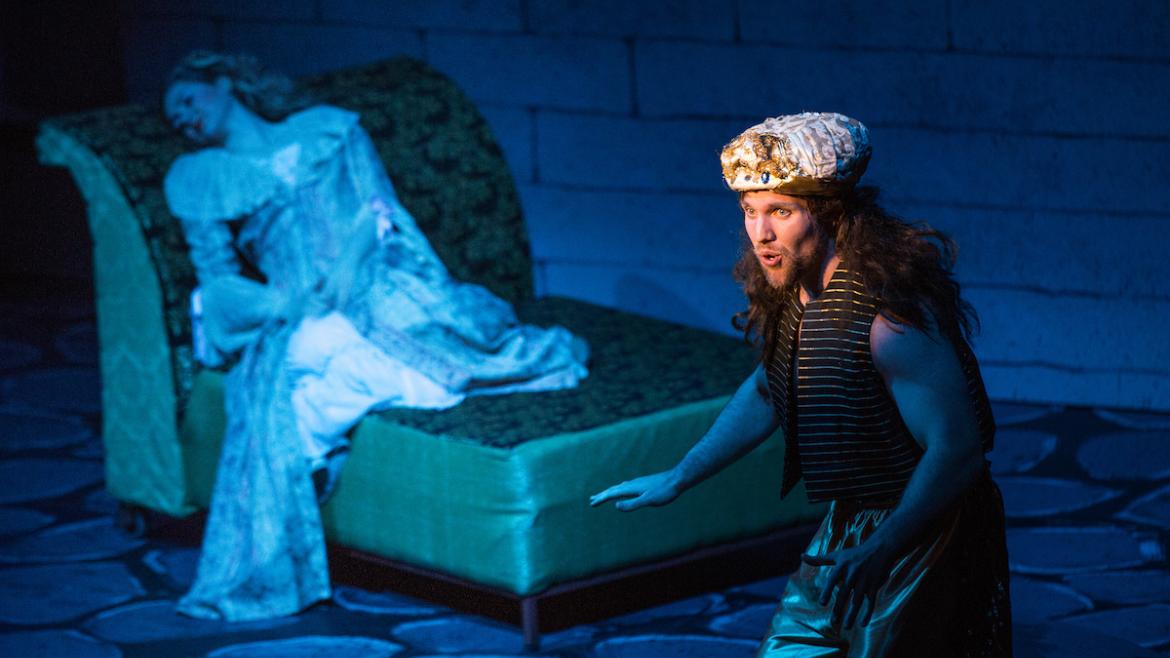 If you think opera is an acquired taste, think again. ASU’s Lyric Opera TheatreThe Lyric Opera Theatre program in the School of Music is housed in the Herberger Institute for Design and the Arts. says a new production of “The Magic Flute” is perfect for the novice palate.

“Most people hear the word ‘opera,’ and they get scared. The perception of opera is that it is sung by stuffy people with horns on their head that stand on stage and sing at people,” said Dale Dreyfoos, stage director and associate artistic director of Lyric Opera Theatre.

He added while that stereotype is still pervasive, “if you like musicals, you should like operas as well.”

Fighting that perception has been a lifelong battle for Dreyfoos, who began his performing career at the age of 10 in the Atlanta Boys Choir. A year later, he saw a performance of “The Magic Flute” and was “hooked on opera.”

Formed in 1964, Lyric Opera Theatre’s mission is to prepare opera and musical theatre artists for professional careers. Through individual and classroom instruction, the production of operas and musicals, student-led workshops and community engagement, ASU is working to help maintain the art form.

Hailed as one of Mozart’sWolfgang Amadeus Mozart died two months after it opened in September 1791. greatest musical masterpieces, the 200-year-old fairytale blends magic, mystery and humor with themes of love and good versus evil.

“It’s funny, fast-paced, full of surprises, plus the music is heavenly,” said Brian DeMaris, music director and artistic director of Lyric Opera Theatre. “The characters connect with the audience right away.”

“The Magic Flute” will be sung in German with English dialogue, and features “Der Holle Rache,” one of the most famous and ambitious arias in all of opera. Soprano Lauren Berman, who portrays the Queen of the Night, will perform the 2-minute vocal pyrotechnic on Friday and Sunday.

“It’s definitely a difficult aria,” said Berman, who is currently working on her doctorate in vocal performance. “I can tell if I haven’t had a good night’s sleep or have been over singing, because if I’m not at the top of my game, I can’t get through it. I’ve never had a role like this.” 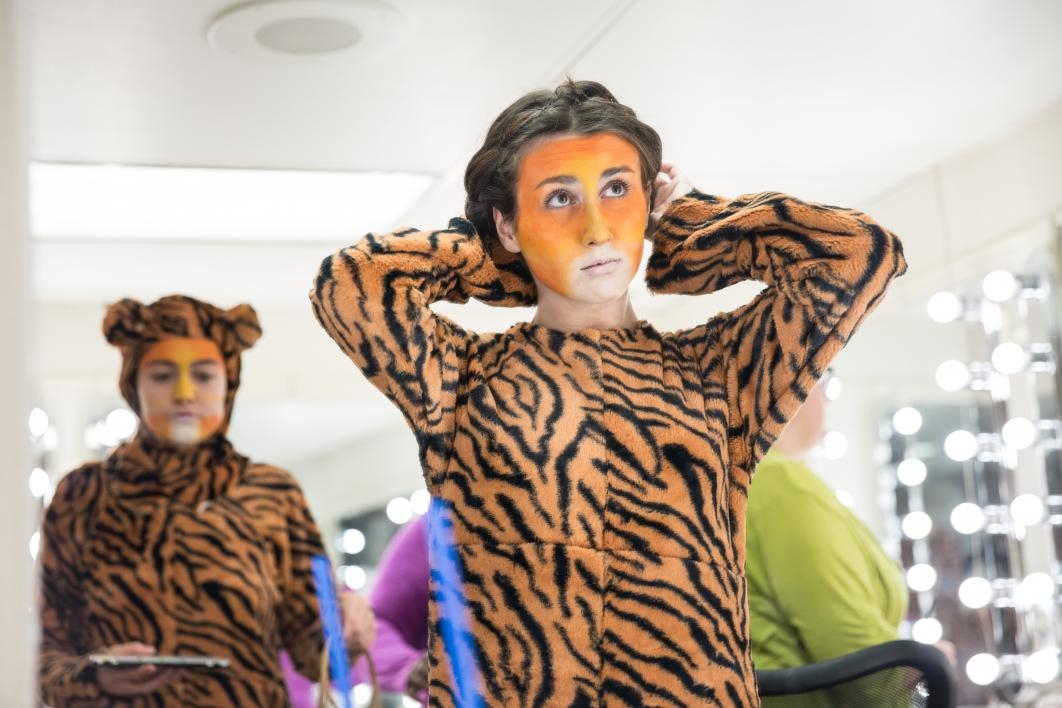 Musical theater sophomore Julia Davis fixes her hair while in costume before the start of the final rehearsal. 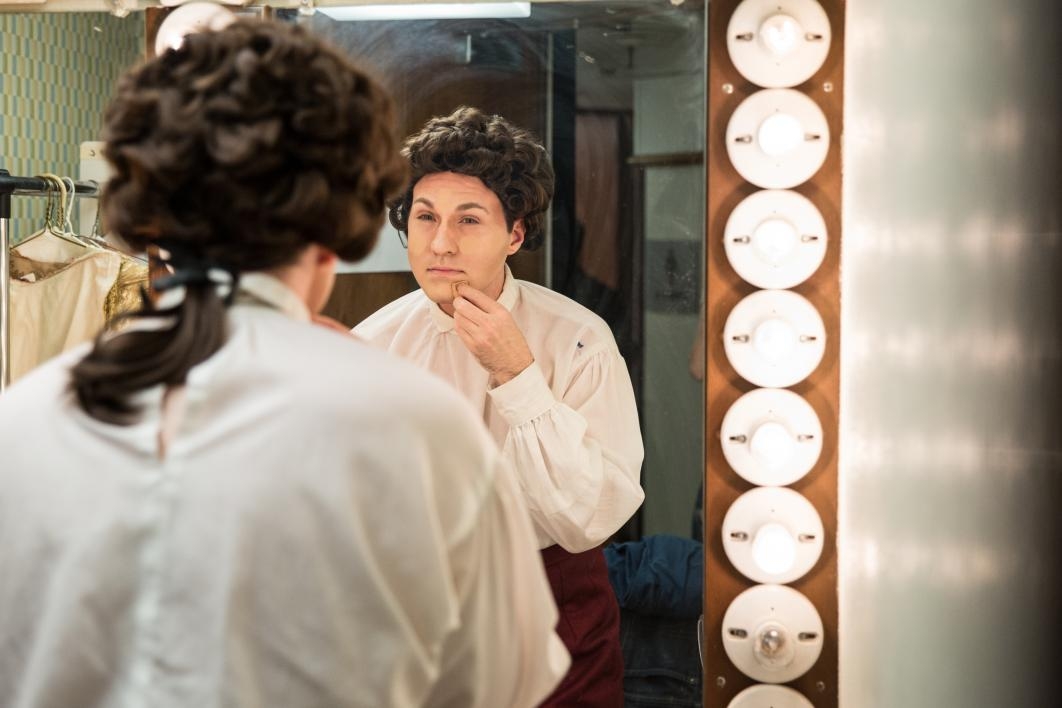 Josef Curtis, a doctorate in vocal perofrmance, applies bronzer for his role of Tamino in "The Magic Flute." Artistic director of the Lyric Opera Theatre, Brian DeMaris, gives his musicians notes before the first dress rehearsal of "The Magic Flute." 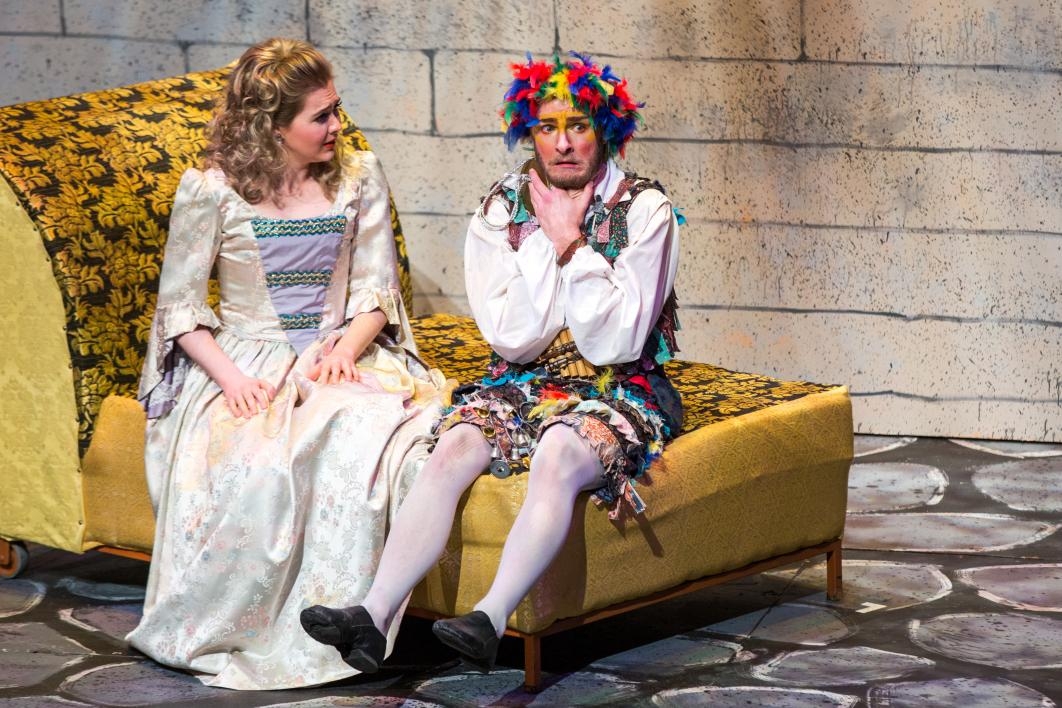 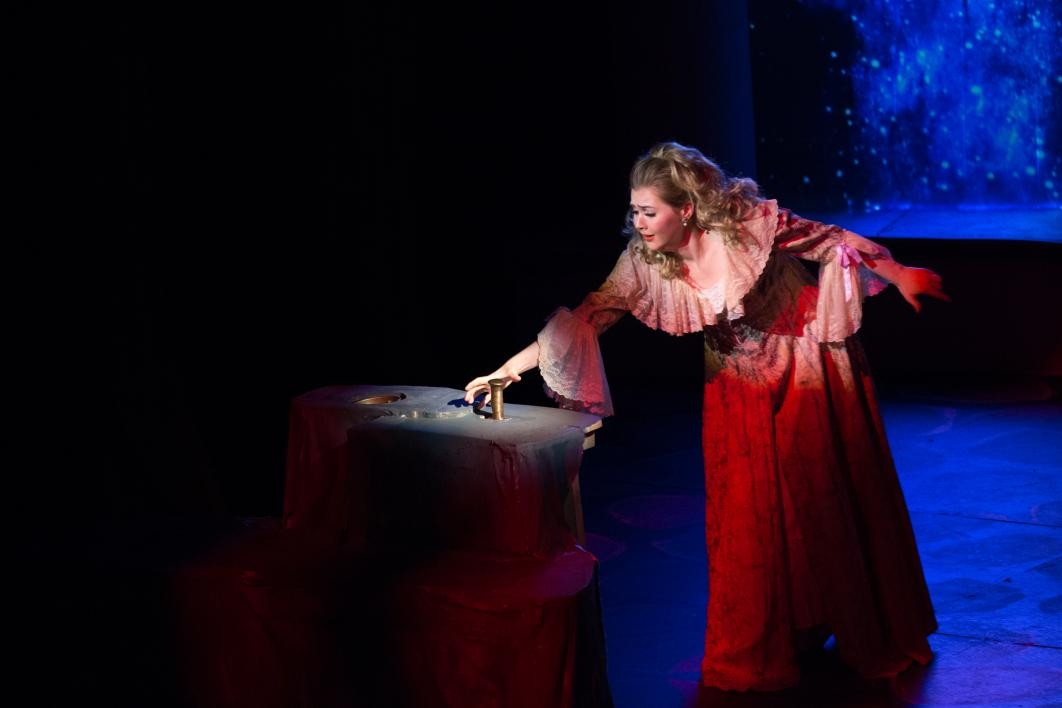 Doctor of musical arts student Asleif Willmer, who plays Pamina, reaches out for an item under the orders of her mother, Queen of the Night, during Monday night's dress rehearsal. 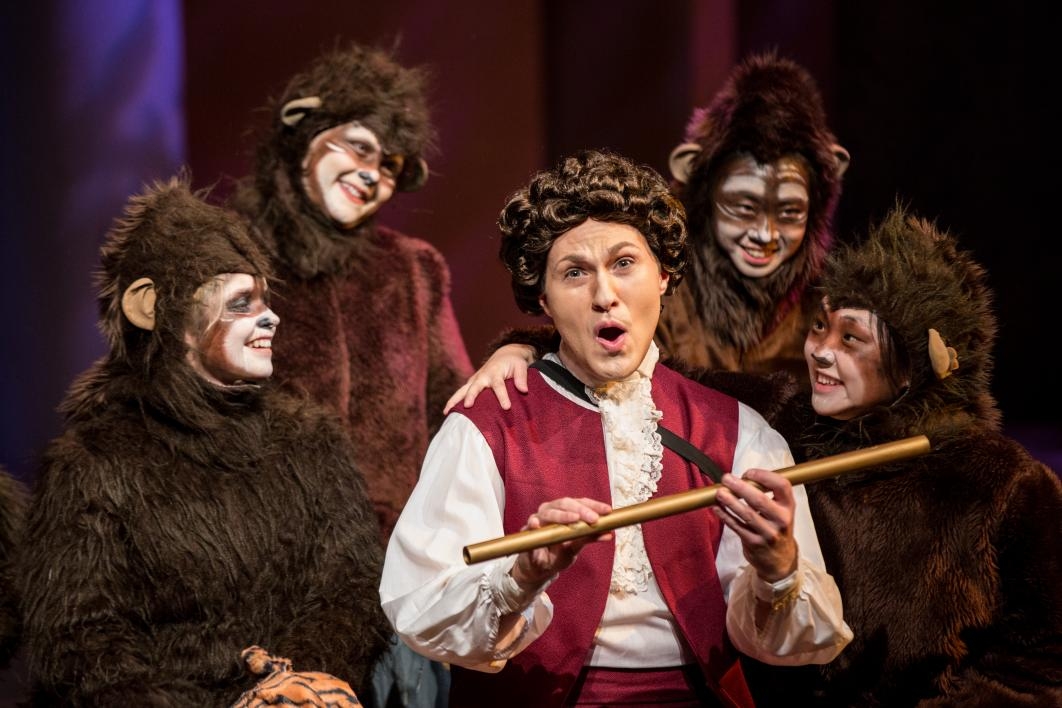 Tamino, played by Josef Curtis, sings a solo surrounded by monkeys attracted to the magic flute. 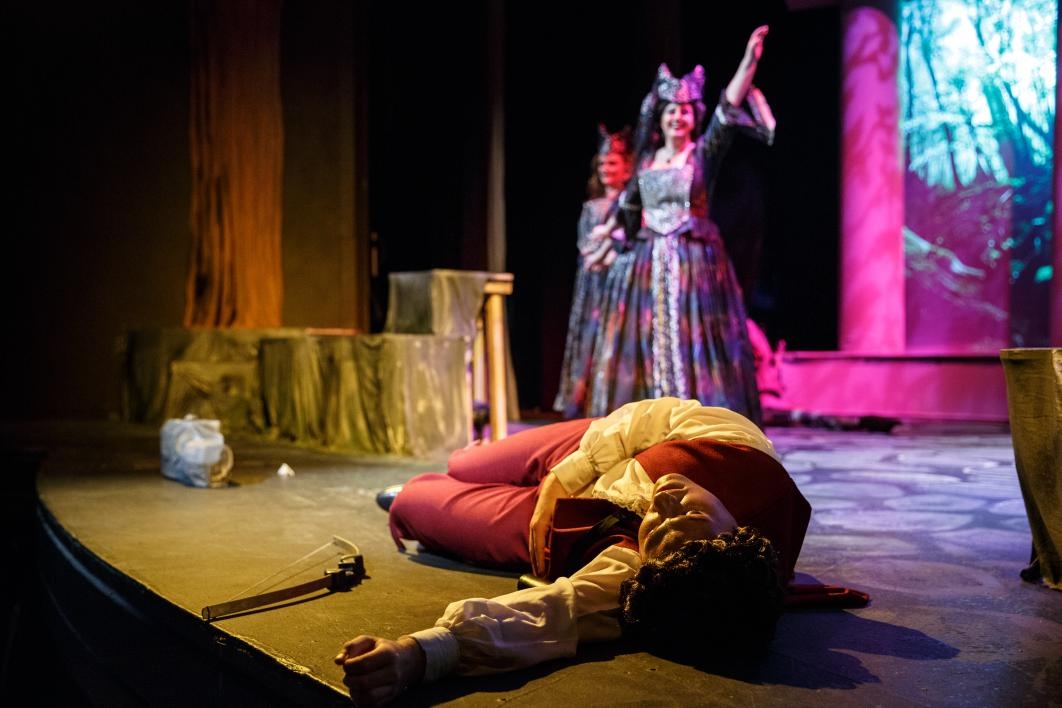 The ladies of the court of the Queen of the Night wave goodbye to Tamino on the floor during Monday evening's dress rehearsal.

The show also has its fair share of laughs, provided mostly by Papageno, a simple bird-catcher who yearns for a girlfriend and a glass of wine.

“Even though the story is close to 200 years old, the story, the issues and the characters are still the same as today,” said Nathan Haltiwanger, a first-year master’s student studying Opera Performance and one of two students who plays Papageno. “We feel we’ve made this opera more approachable in many ways.”

A lot of work goes into an opera production said Miriam Schildkret, a voice performance major who plays the Third Lady.

“If you’re not sweating at the end, you’re not doing it right,” Schildkret said.

Top photo: Sarastro's slave Monostatos, played by Ted Zimnicki, discloses his intention to force himself upon Pamina while she sleeps in ASU Lyric Opera Theatre's production of "The Magic Flute." Photo by Anya Magnuson/ASU Now.