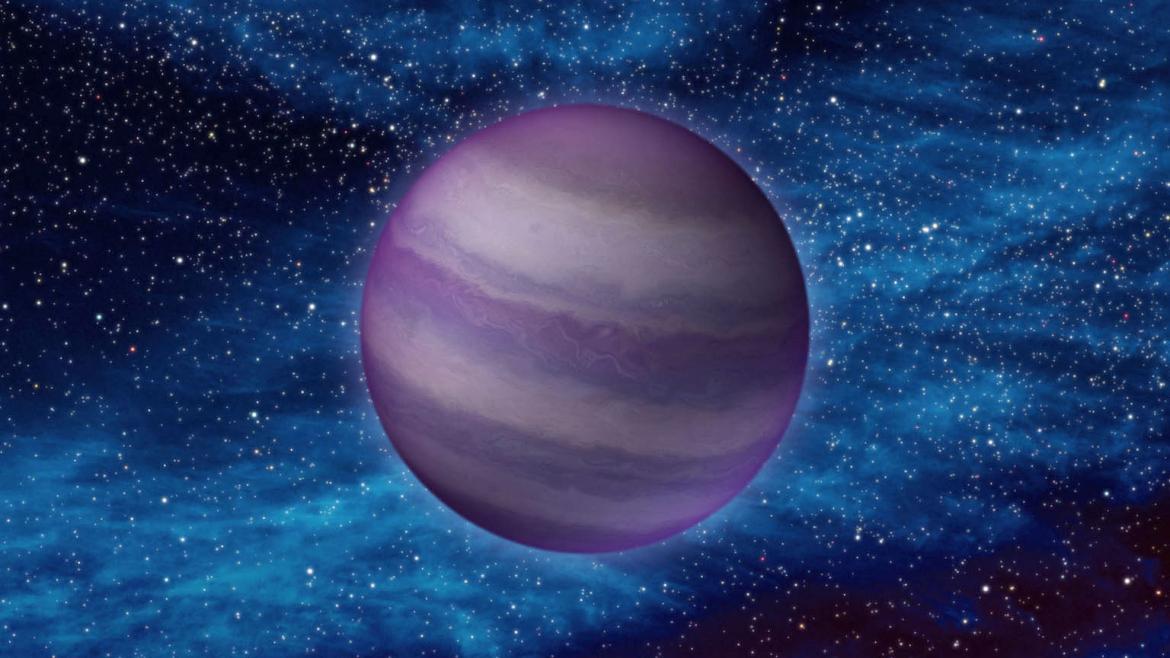 Does our solar system have an undiscovered planet? You can help astronomers find out

Tempe campus Washington, D.C.
Astronomers put out the call to citizen scientists to help in search for planet.
February 15, 2017

Arizona State University astronomer Adam Schneider and his colleagues are hunting for an elusive object lost in space between our sun and the nearest stars. They are asking for your help in the search, using a new citizen-science website called Backyard Worlds: Planet 9.

Astronomers have found evidence for a ninth planet in our solar system. The evidence comes from studying the orbits of objects in the solar system’s Kuiper Belt. This is a zone of comet-like bodies orbiting the sun out beyond the orbit of Neptune. The Kuiper Belt is similar to the asteroid belt that circles the sun between Mars and Jupiter, but it lies dozens of times farther out.

This hypothetical Planet 9 could be similar in size to Neptune, but it may orbit up to a thousand times farther away from the sun than the Earth does. So while astronomers can see its effects on the Kuiper Belt objects, no one has yet observed Planet 9 directly.

"If it exists, Planet 9 could be large — maybe 10 times the mass of Earth but orbiting far out beyond the Kuiper Belt," Schneider said. "Yet it must be extremely dim and hard to find."

A postdoctoral researcher in ASU's School of Earth and Space Exploration, Schneider is particularly interested in studying objects smaller than fully fledged stars and ranging down in size to planets.

Hiding out in the neighborhood

In addition to searching for a distant planet orbiting the sun, this new project will help astronomers identify the sun’s nearest neighbors outside of our solar system.

"There are just over four light-years between Neptune and Proxima Centauri, the nearest star, and much of this vast territory is unexplored," said the lead researcher for Backyard Worlds: Planet 9, Marc Kuchner, an astrophysicist at NASA's Goddard Space Flight Center. 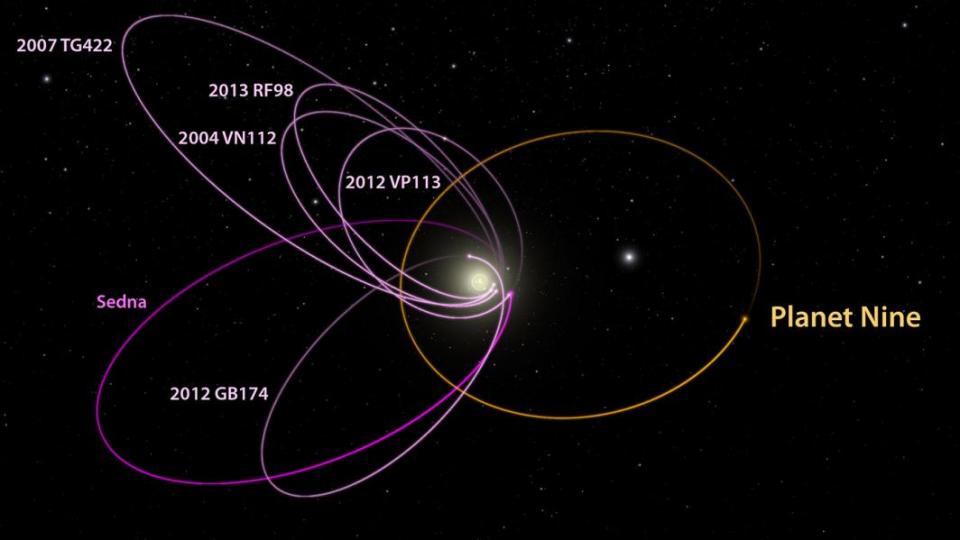 This diagram shows the orbits of several Kuiper Belt objects that were used to infer the existence of Planet 9. If it exists, Planet 9 may reveal itself in WISE infrared images.

"Brown dwarfs are somewhat mysterious," said Schneider. "They have masses of less than 80 times that of Jupiter, because that's the point at which nuclear fusion begins and an object becomes by definition a star." But there's no real lower limit to how small a brown dwarf could be, he said.

"If we find one that's, say, five times the mass of Jupiter and it's orbiting a star, we'd call it a planet," Schneider explained. "But an identical object could also be floating freely in space, unattached to any star, and we'd call it a brown dwarf."

So how do astronomers find such objects in space? That's where you can contribute using a website that enlists the help of citizen scientists. It's called Backyard Worlds: Planet 9, and it uses images taken by NASA's WISE space telescope.

WISE, which stands for Wide-field Infrared Survey Explorer, was launched in late 2009 and has mapped the entire sky several times during the past seven years. WISE detects infrared light, the kind of light emitted by objects at room temperature, like planets and brown dwarfs. This sensitivity to infrared light makes WISE uniquely suited for discovering Planet 9, if it exists.

But there's a snag: Images from WISE have captured nearly 750 million individual sources in the sky. Doubtlessly among these lurk the elusive brown dwarfs and possibly Planet 9. The question is how to sift through the data and identify them.

The trick to finding these needles in haystacks of WISE data is to look for something in motion. Planetary objects and brown dwarfs roaming near the sun can appear to move across the sky, leaving other celestial objects such as background stars and galaxies, which lie immensely far away, apparently fixed in place.

So the best hope for discovering these worlds is to systematically scan infrared images of the sky, searching for objects that move.

Above: Previously known brown dwarf WISE 0855-0714 is seen here in this Backyard World flipbook as a moving orange dot at upper left. Citizen scientists will be asked to inspect images just like this to search for new objects in the solar neighborhood. Photo courtesy of NASA

Automated searches for moving objects in the WISE data have already proven successful, but computerized searches are often overwhelmed by image artifacts — visual noise — especially in crowded parts of the sky.

As Schneider explained, "People who join in the Backyard Worlds search bring a unique skill to the search: the human ability to recognize movement."

If it moves, check it out

The search method is a 21st-century version of the same technique used at Arizona's Lowell Observatory by astronomer Clyde Tombaugh. He discovered dwarf planet Pluto 87 years ago this week, on Feb. 18, 1930. Back then, Tombaugh compared two photographs taken a couple weeks apart, looking for a tiny dot of light that shifted position.

The Backyard Worlds search works similarly, but by electronically serving up flipbooks of WISE images taken at different times. As each flipbook plays, objects in the field move or change appearance, making it easy for volunteer observers to flag suspicious objects for later follow-up. Participants will share credit for their discoveries in any scientific publications that results from the project.

The discovery of a ninth planet in our solar system or a new nearest neighbor to the sun would mark a major event in the history of astronomy. Such objects could already be present within the vast WISE dataset, just waiting to be found.

"This program offers an excellent opportunity for citizen scientists to help astronomers with an edge-of-discovery search," said Schneider.

Besides Arizona State University, Backyard Worlds: Planet 9 is a collaboration between NASA, University of California Berkeley, American Museum of Natural History in New York, the Space Telescope Science Institute in Baltimore, and the Zooniverse, a collaboration of scientists, software developers and educators who collectively develop and manage citizen science projects on the internet.

Top image: This artist's concept illustrates a close-up view of a cool brown dwarf. Objects like this, drifting just beyond our solar system, have been imaged by NASA's Wide-field Infrared Survey Explorer, and many more could be discovered by Backyard Worlds: Planet 9. Image by NASA

Vera Coleman has a strong interest in environmental and social debates. Coleman also loves studying Spanish culture, literature and language. Through her PhD dissertation and the School of International Letters and Culture, she has found a way to bring the disciplines together.Her dissertation is titled “Beyond the Anthropocene: Multispecies Encounters in Contemporary Latin American Literature, ...

Vera Coleman has a strong interest in environmental and social debates. Coleman also loves studying Spanish culture, literature and language. Through her PhD dissertation and the School of International Letters and Culture, she has found a way to bring the disciplines together.

Her dissertation is titled “Beyond the Anthropocene: Multispecies Encounters in Contemporary Latin American Literature, Art, and Film.” 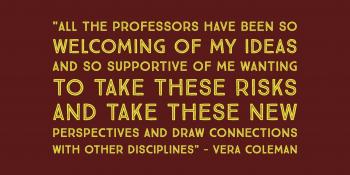 Coleman has looked at how Latin American artists pull nature into their work, and applying those findings to environmental solutions.

In an explanation of her research, Coleman wrote, “Writers, filmmakers and artists of Latin America today verge away from pessimistic images of environmental destruction and instead look to mutually beneficial interactions among members of different species as a beacon of hope lighting up a better future for our shared planet.”

“I’m interested in the ways that contemporary 21st-century Latin American writers, filmmakers and artists are confronting this notion of the Anthropocene, which is still being hotly debated,” Coleman said, speaking to SILC from the Modern Language Association Convention in Philadelphia.

The Anthropocene, as Coleman describes it, is a label used by some scientists and cultural theorists to describe the current age in terms of global human impact.

“I was a biology major for two years and took courses in genetics and evolution and chemistry and physics, and then became really passionate about Spanish literature,” Coleman said. “I kind of thought that those two years were wonderful, but I don’t know what I’d end up doing with them.”

“I became very interested in SILC and ASU. I was very drawn to the fact that it’s a multi-language school,” she continued. “There’s not just a Spanish department, but a school that has multiple languages working and collaborating together”.

Obviously, merging language and environmental study is complex, but Coleman found support for her many interests at the School of International Letters and Culture. Faculty support and guidance helped her find ways to meld different fields together.

“All the professors have been so welcoming of my ideas and so supportive of me wanting to take these risks and take these new perspectives and draw connections with other disciplines,” Coleman said.

Coleman started studying different art forms that comment on the environment in countries like Uruguay, Mexico, Brazil, Colombia, Peru and Argentina. She even learned about indigenous communities in some of those countries.

Coleman has enjoyed exploring discussions about the environment outside of the English-speaking world and has enjoyed merging different areas of study at ASU.

“Cultural study looks at film and art and journalism and performance, digital media. So it’s the very broad focus on the notion of text,” Coleman explained. “So we can analyze whole different forms of cultural expression to get a sense of what’s going in these countries. Those are the things that I really liked, that really drew me to SILC.”