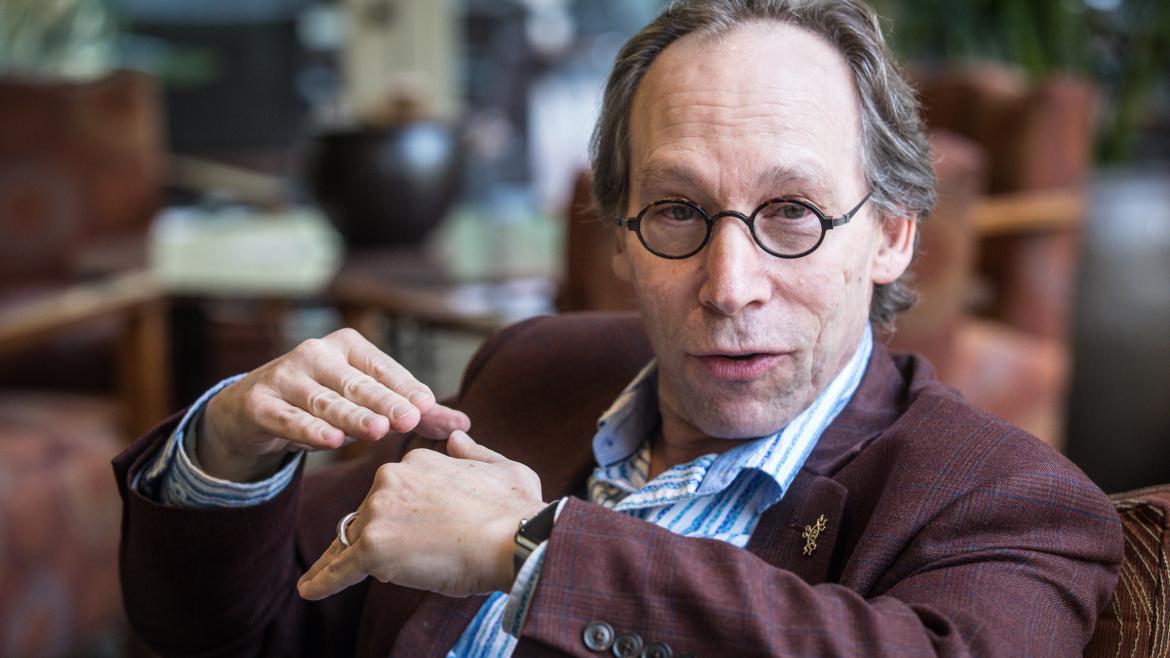 Losing the truth is no less disconcerting than losing gravity. Suddenly, you’re down a rabbit hole where nothing makes sense and you don’t know what to believe. Normal rules don’t apply any more.

What do you do?

Educate, present a process and data for people to arrive at their own conclusions, and speak to them in a language they understand.

That was the topic of a discussion Tuesday between internationally recognized theoretical physicist Lawrence Krauss and James Weinstein, the Dan Cracchiolo Chair in Constitutional Law at the Sandra Day O'Connor College of Law at Arizona State University. (See it here.) The conversation was part of Second Nature’s Presidential Climate Leadership Summit, which is part of ASU’s Sustainability Solutions Festival.

Before that chat, KraussKrauss is a professor in ASU's School of Earth and Space Exploration and is part of the Department of Physics in the College of Liberal Arts and Sciences. He is director of the Origins Project, a university initiative created to explore humankind's most fundamental questions about our origins. gave an overview to ASU Now.

Question: You are going to be talking about our new idea of "alternative facts"?

Krauss: There have always been "alternative facts." They’ve just been wrong.

Q: What happens when facts are dismissed, seen as optional or replaced with “alternative facts”?

A: A healthy democracy depends on access to information, because you can’t make reasonable voting decisions without knowing what’s happening.

If they discard it, distort it or ignore it, the policies are going to be bad. It’s that simple.

A: There’s a deep influence.

First of all, it produces bad policy now, but it also ultimately leads to a more poorly informed electorate — both in the point of view of voting, but also if there’s a notion that there’s no such thing as objective reality, that you can’t trust key sources of information, then how do you proceed as a human being?

Ultimately, it’s a process of education, and we’re at an educational institution.

What too many people think is that science is a bunch of facts. Science is a process to determine how the world works, to ask questions, to separate nonsense from sense.

That’s what we should be teaching. When the government gives up that whole notion of the scientific process, it sets a poor example for parents and children in the school system.

Q: So how do you effectively communicate facts in this kind of an environment?

In a world where people have learned not to trust people and a lot of people sound good on both sides, then you’re automatically starting from a position of weakness in a sense.

There’s also a sense that scientists are a sort of liberal-leaning whatever. There’s a long history in teaching in education that says the only way people can learn is by confronting their own misconceptions.

Then they’ll confront their own misconceptions. One has to start with how you get to the facts, not saying that global warming is happening, but how do we know? Is it complicated? Can the average person understand it? Also, more importantly, present data. Data is a little bit different than facts. Talk about how the globe is warming and people say, "That’s just modeling." Show the data. Show pictures. Show stuff that is evidence in your hands. Then I think people will be more open and accessible. ...

I think that’s ultimately it. If you want people to start trusting, speak in a language they can understand.

People are beginning to be skeptical, which is the first step in thinking for yourself. And we’re seeing that happen. I have more faith than I did two weeks ago.

Ultimately, reality has a way of biting you in the butt. It can take a long time before that happens. Even George Orwell said, "Ultimately, you knock up against reality." And as one of my favorite science fiction writers Philip K. Dick said, "Reality is that which continues to exist even when you stop believing in it."

Arizona State University was not at the top of Amanda Minutello’s college list. She had applied to 13 schools and only two of them were outside of the Eastern Time Zone. She lived 3,000 miles away on Long Island in Sayville, New York. But her parents encouraged her to attend More to Explore, her only visit to ASU before making her college choice.“I wanted to learn more about the campus, Ira A....

Arizona State University was not at the top of Amanda Minutello’s college list. She had applied to 13 schools and only two of them were outside of the Eastern Time Zone. She lived 3,000 miles away on Long Island in Sayville, New York. But her parents encouraged her to attend More to Explore, her only visit to ASU before making her college choice.

“I wanted to learn more about the campus, Ira A. Fulton Schools of Engineering and Barrett, The Honors College.” Her Presidents’ Day visit to the Tempe campus did not disappoint. “The enthusiasm, smiles and pride of the current students was contagious. I couldn’t help but want to be a Sun Devil.” 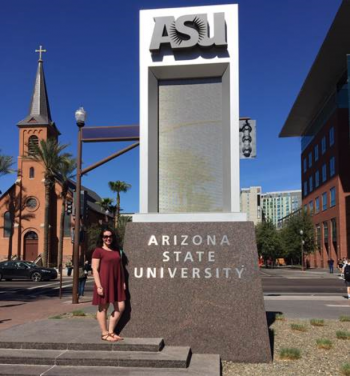 Amanda Minutello shared this photo on social media when she announced her decision to attend ASU. Download Full Image

“I was able to meet with professors I still keep in touch with as a current student,” Minutello, 18, said. “And I made friends that I see while walking on campus.”

Sarah Horvath, 19, from Scottsdale, Arizona, had a similar experience, “I met several upperclassmen in my major who I still see from time to time and chat.” Horvath, a digital culture major concentrating on graphic information technology, was already pretty confident that she would be a Sun Devil, but attending More to Explore solidified her decision. “I learned so much about on-campus life, my major and all of the opportunities available to me.”

More to Explore is a choose-your-own-experience visit program for high school, transfer and incoming graduate students. This event allows students to build their own schedules for the day. They can choose from admission and financial aid sessions; club fairs; campus, housing and facility tours including lab spaces, libraries and the Sun Devil Stadium. Each college, including Barrett, The Honors College, offers information sessions and tours. The event boasts more than 300 activities and sessions, and it takes place across four campuses located in the Phoenix metropolitan area.

High school seniors who are admitted to the Downtown Phoenix, Polytechnic, Tempe or West campuses also have the opportunity to spend the night in a residence hall the evening before More to Explore.

“I did attend the overnight experience and was paired with a student in Barrett, The Honors College,” Minutello says. She had applied to ASU because of the strong engineering programs and honors college. Her overnight visit at the Tempe campus was a highlight of the experience. “[My host] took me around campus, showed me the [many] Starbucks locations and told me the secrets about Barrett, engineering and how to be successful at college.”

My host "was a large influence on my decision to attend ASU,” she said.

But Minutello says the moment she knew she was meant to be a Sun Devil was while attending an ASU men’s basketball game sitting in the 942 Crew student section with her host. “The school spirit and the enthusiasm from the students in the stands was exactly what I wanted when choosing a school. That was the night I told myself ASU was my school.”

Horvath also attended the overnight experience at the Tempe campus and said visiting Hayden Library with upperclassmen from her major was a highlight of the evening. “We ended up exploring the nooks and crannies of the library and discovering all kinds of neat stuff. It was a great late-night adventure.”

More to Explore is ASU’s single largest recruitment event each year, hosting more than 2,000 students and their families over two days. The Downtown Phoenix campus will host events on Sunday, Feb. 19, while the other ASU campuses will have their More to Explore activities on Presidents’ Day, Feb. 20.

Matt López, the new executive director of ASU Admission Services, came to ASU after working at the University of Utah and University of Colorado, Boulder. López says he has never seen an event this comprehensive for prospective students. “The number of sessions and freedom of choice given to students when they register means no two students will have the same experience at More to Explore. That mirrors the level of individuality students experience as Sun Devils.”

“In my first semester at ASU, one of the best parts of my experience has been making memories with my friends in the residence hall,” reflects Horvath. “It was great to have a taste of that experience at More to Explore.”

Minutello says her experience at More to Explore was a key factor in her decision to attend ASU. She has advice for students: “Ask as many questions as you can; to professors, hosts, admission counselors and current students. This program is for you, to let you experience a day in the life as a Sun Devil.”

She added that More to Explore is as much for parents as it is for students. “My mom felt right at home when we came to visit. She was more excited to visit campus than I was.”

Horvath encourages visiting students to be open to meeting new people. “Don’t be afraid to make conversation with the people you meet, even if they seem like intimidating, experienced college students. It is a great way to get your feet wet in your new college life.”

Look for Minutello at More to Explore giving tours of the Fulton Schools of Engineering on the Tempe campus as a Fulton Ambassador, and she will be hosting a student during the Tempe overnight experience as well. “ASU is my home because of the experience I had at More to Explore and the people I met during my two days on campus.”

To learn more or register for More to Explore, click here.