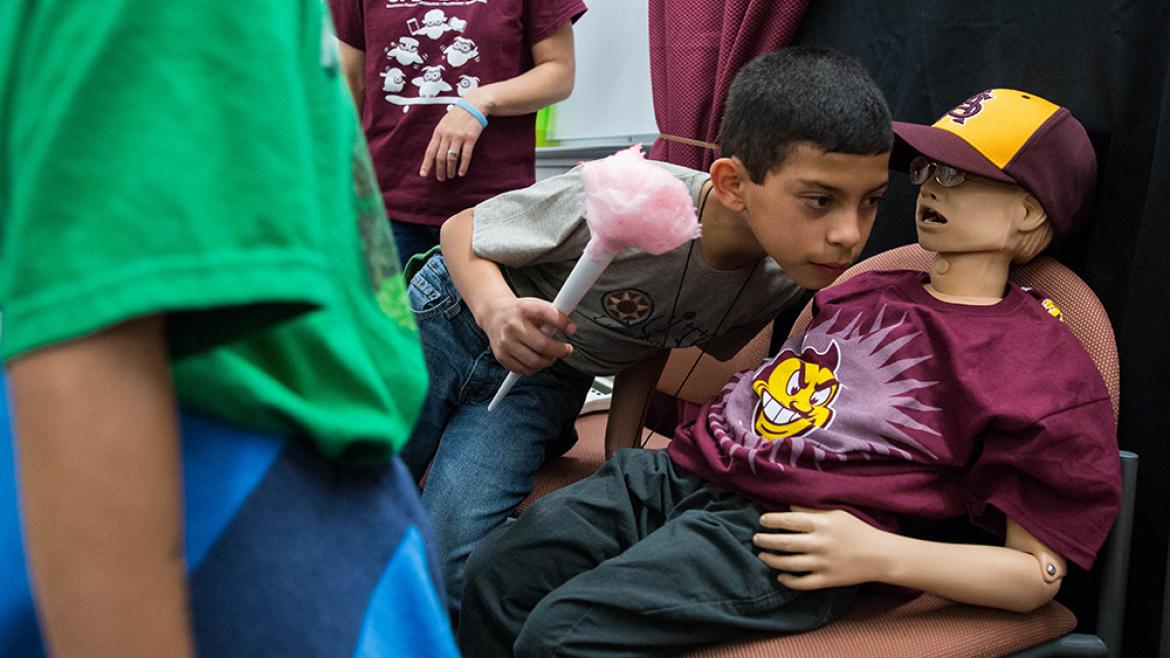 West campus
ASU's West campus opens its doors for visitors to explore learning and fun.
Missed the fun? Next Night of the Open Door is Feb. 17 at Polytechnic campus.
February 12, 2017

Night of the Open Door continues in Glendale with CSI, chocolate, creepy-crawlies and more

Arizona State University's Night of the Open Door — five free open houses over the month of February — continued at the West campus in Glendale on Saturday, where the rain held off as visitors learned about forensics, the neuroscience of chocolate, black widow spiders and other subjects.

Scroll down to see video and photos from the event.

Check out the Downtown Phoenix campus' Night of the Open Door event on Feb. 3 here — including healthy cooking demos, coral reef exploration, journalism technology of the future and more. Myra Ramos (left), a senior psychology major who is also a Barrett, the Honors College student, takes a photo with her family (from left) Emanuel, Alexia and Manuel Ramos at ASU's West campus Night of the Open Door. 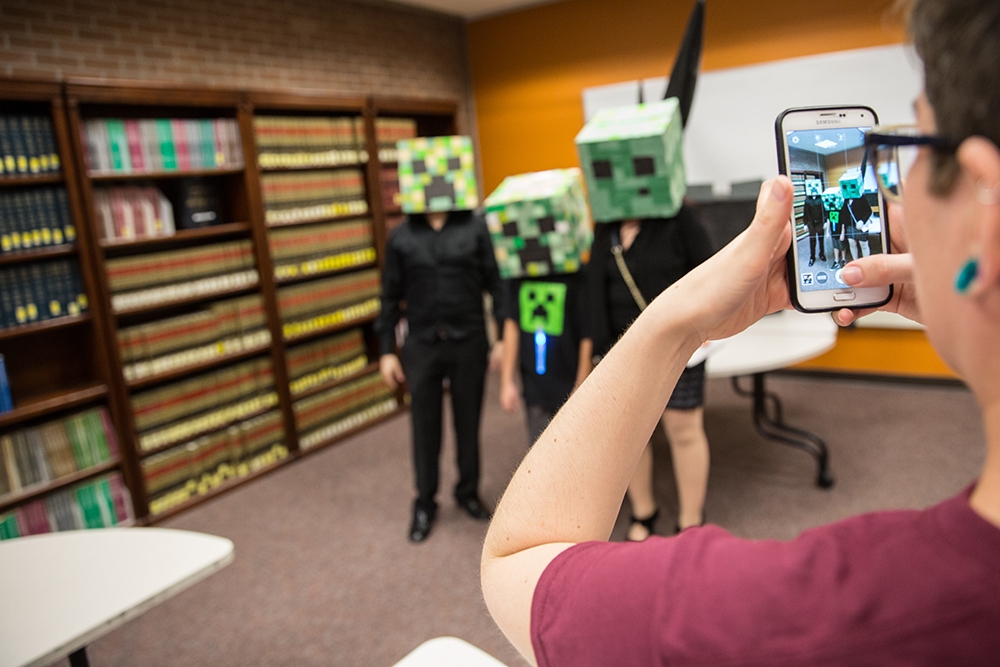 Ashley Gohr, a librarian in West's Fletcher Library, takes a photo of a family with Minecraft boxes on their heads. Gohr made the Minecraft blocks for a themed photo booth for the Night of the Open Door. Brenda Pellecer watches as her son Andres completes a personality test to find out what jobs might be ideal for him during Night of the Open Door on the West campus Saturday evening. 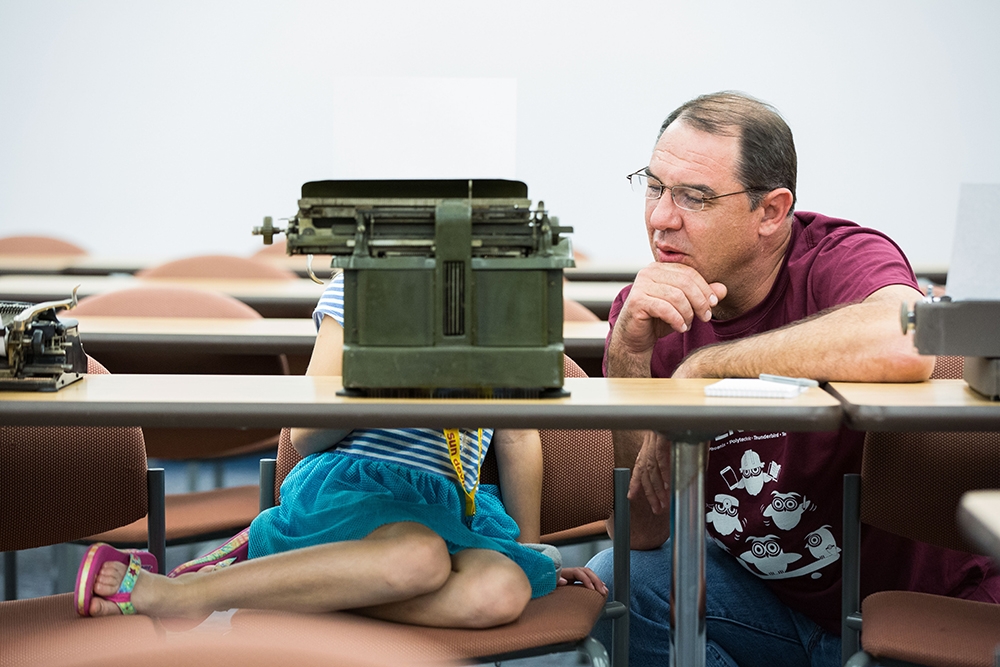 ASU Now writer Scott Seckel helps Alexandra Dinu type out her story during the "Make Headlines and Earn Your Press Badge!" activity at Night of the Open Door on the West campus. 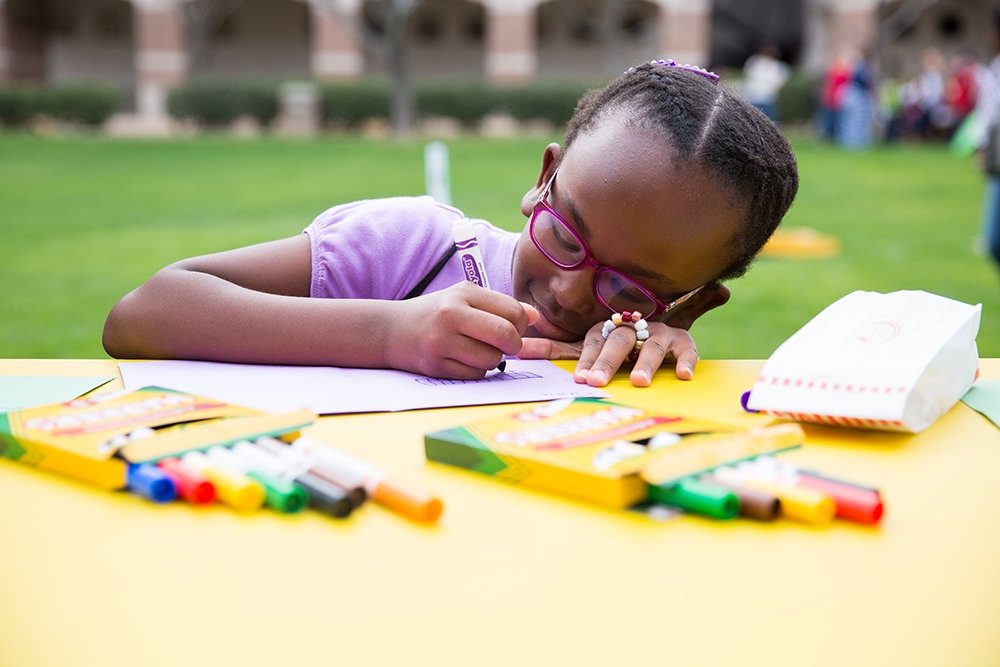 Ashley Shaw draws at the creativity station on the West campus' Fletcher Lawn during Night of the Open Door on Saturday. Seven-year-old Skylar Nun adds to a collaborative art piece with glow-in-the-dark ink in the CLCC courtyard on the West campus. The project was hosted by the Mary Lou Fulton Teachers College. 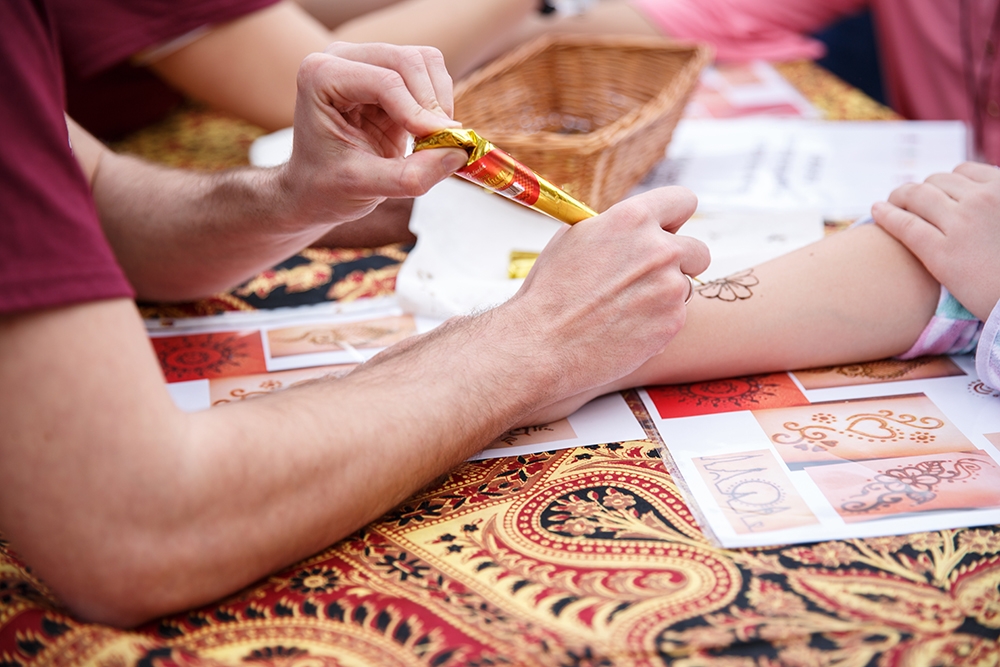 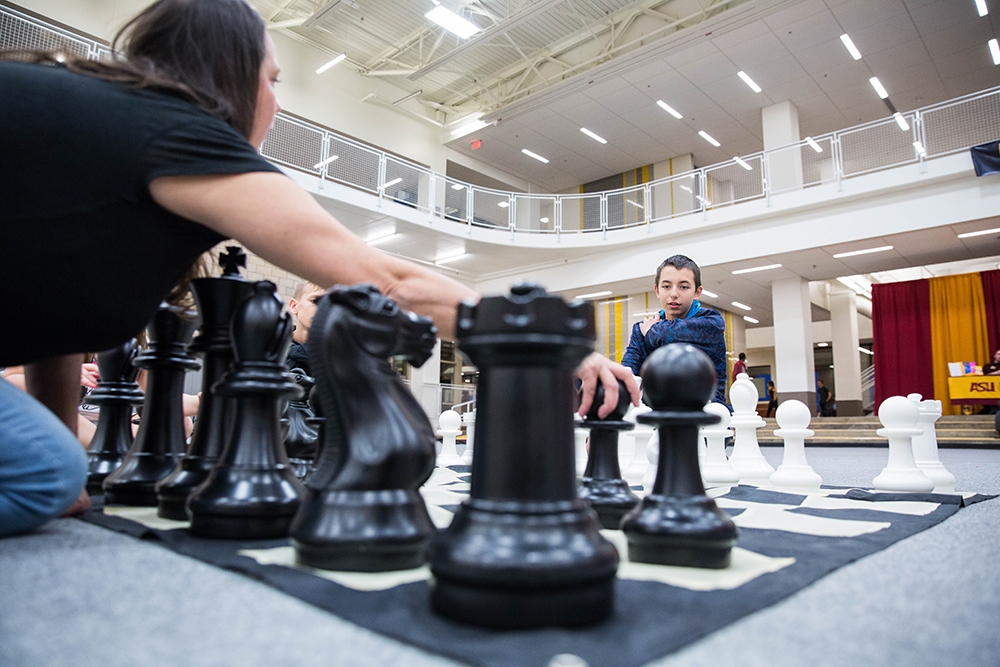 Mason Weckstein plays some oversize chess at the Sun Devil Fitness Center during Night of the Open Door on the West campus. 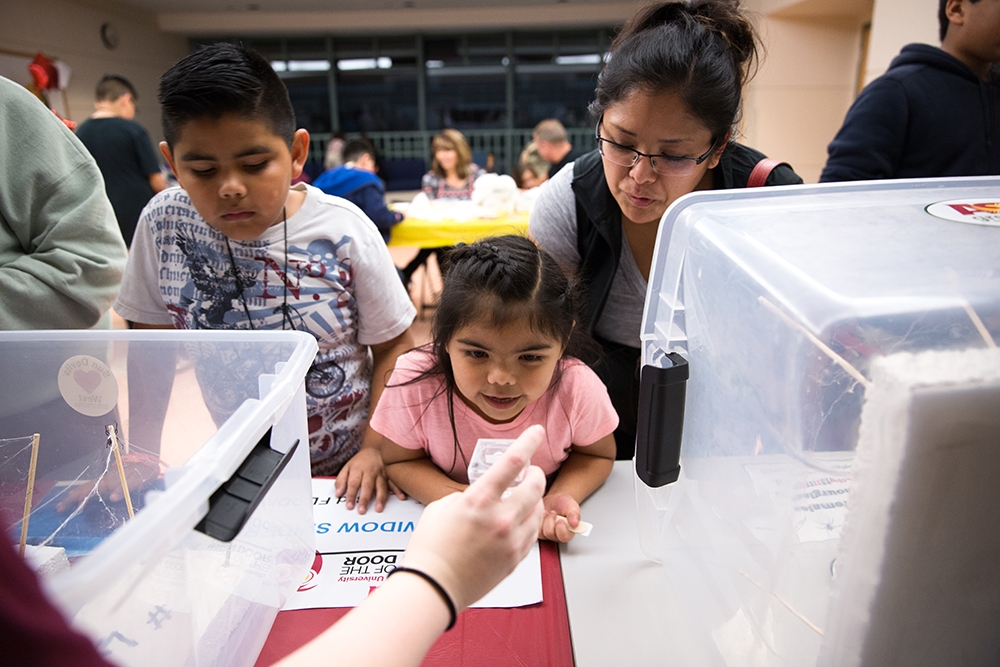 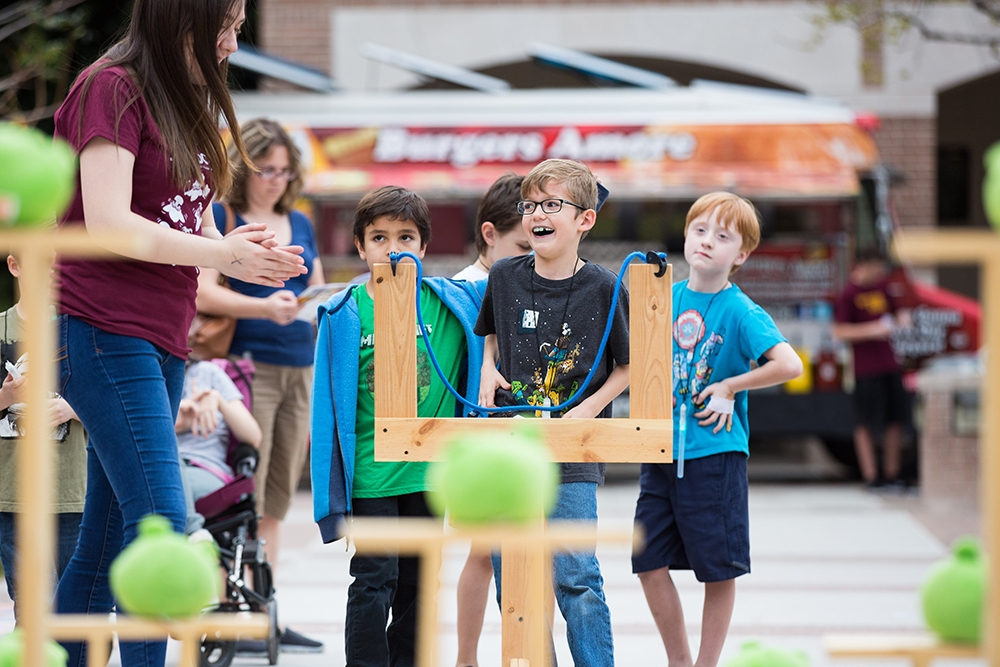 Parker Schultz laughs as he tries to hit a pig at an Angry Birds game during Night of the Open Door on ASU's West campus. 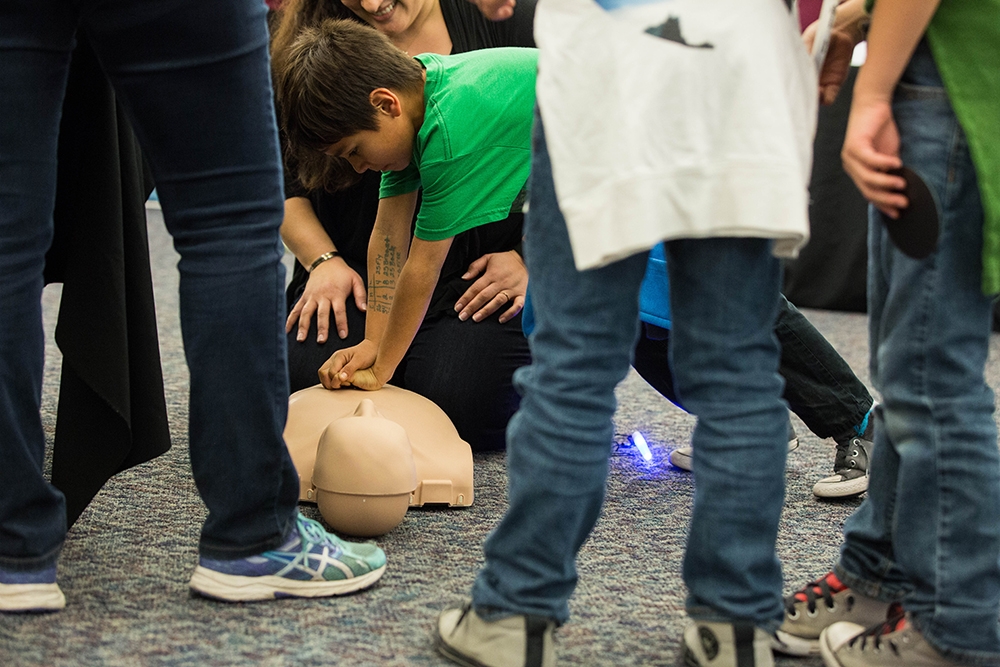 Xander Villa tries his best to give CPR to a dummy Saturday at the West campus. 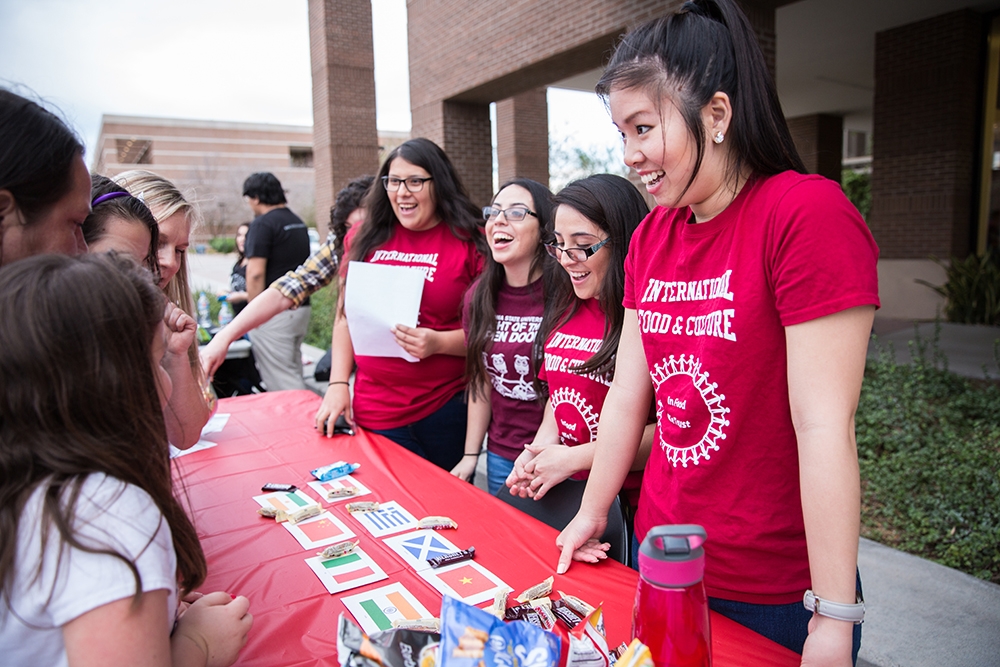 From left: Cecilia Fernandez, Ana Maldonado, Valeria Maldonado and Peggy Lam host a trivia game based on international food facts. They created the International Food and Culture Club, which will meet every Wednesday and Thursday beginning Jan. 18. 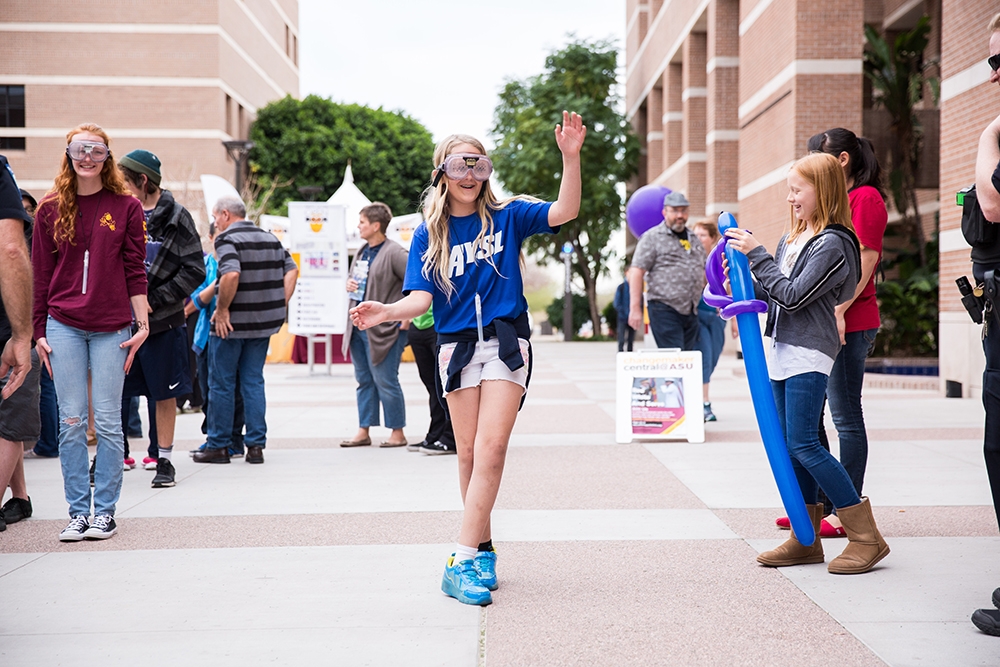 Destiny Deever tries to walk the line while wearing goggles at the ASU Police Department area during Night of the Open Door on the West campus. 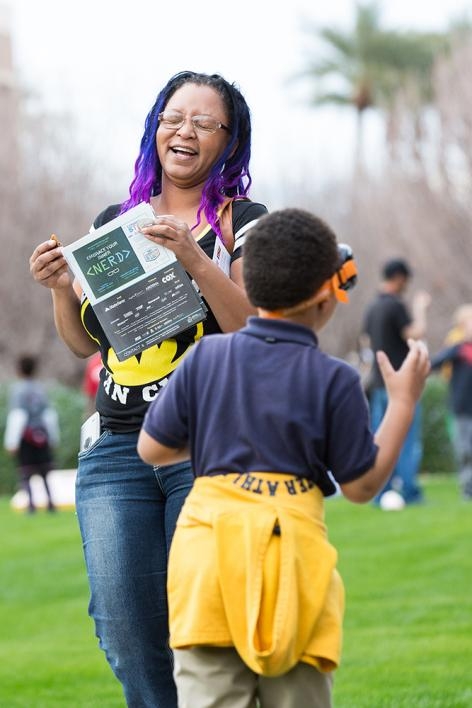 Erin Wheeler watches her son Zachary try "altered state" goggles during Night of the Open Door on the West campus. 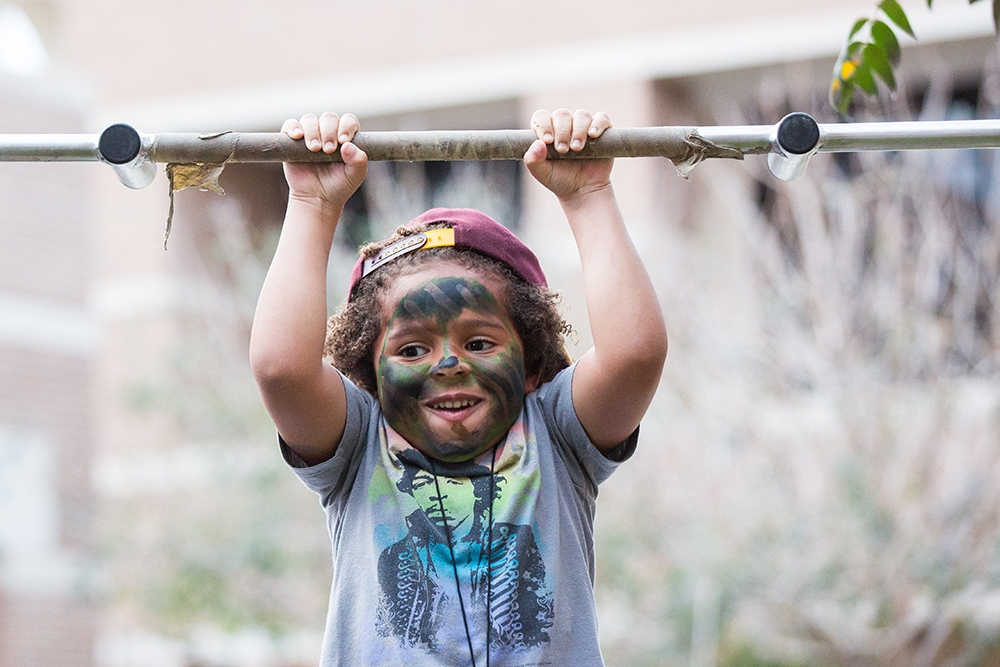 Zaheem Mitchell tries out a pull-up during Night of the Open Door on Saturday. 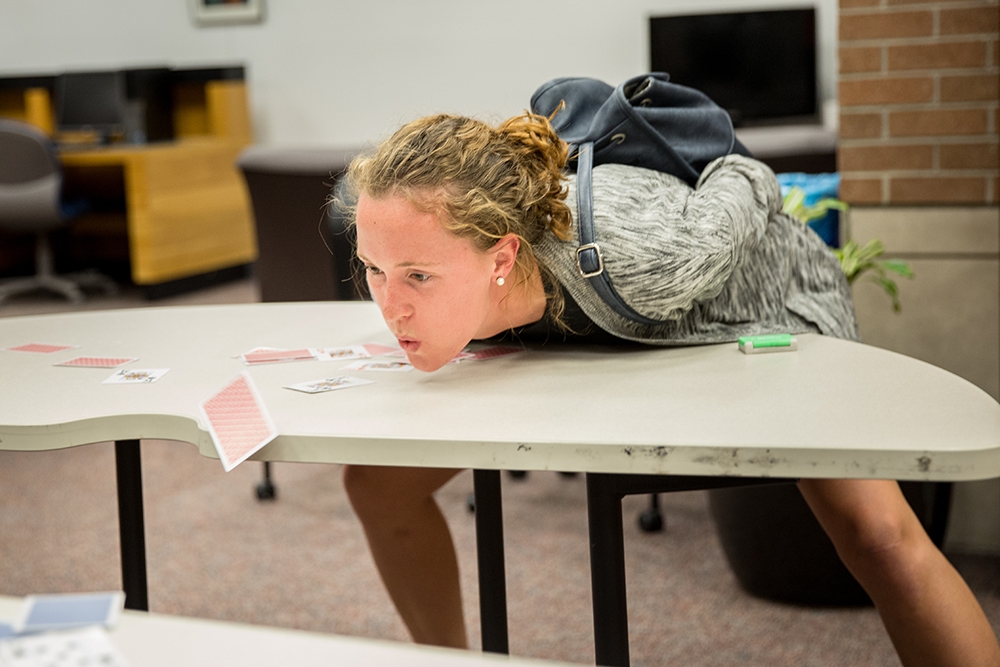 Amanda Murau races to blow cards off a table at the West campus' Fletcher Library. Amanda came to the Night of the Open Door event with her aunt, who works with ASU's Global Launch program. 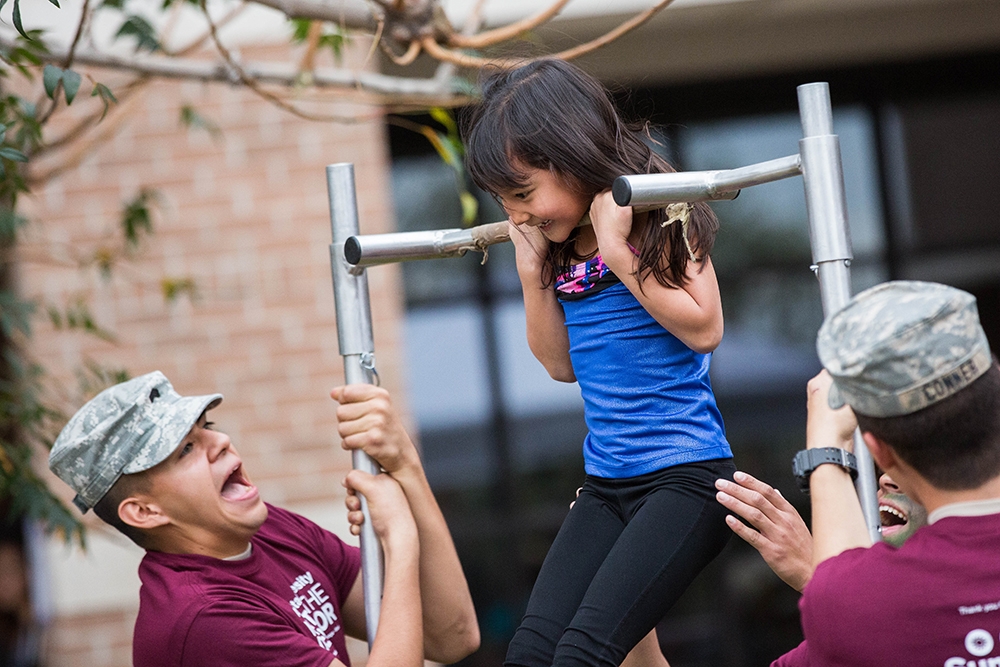 Ashley Lonier completes her 10th pull-up during Night of the Open Door on Saturday evening. 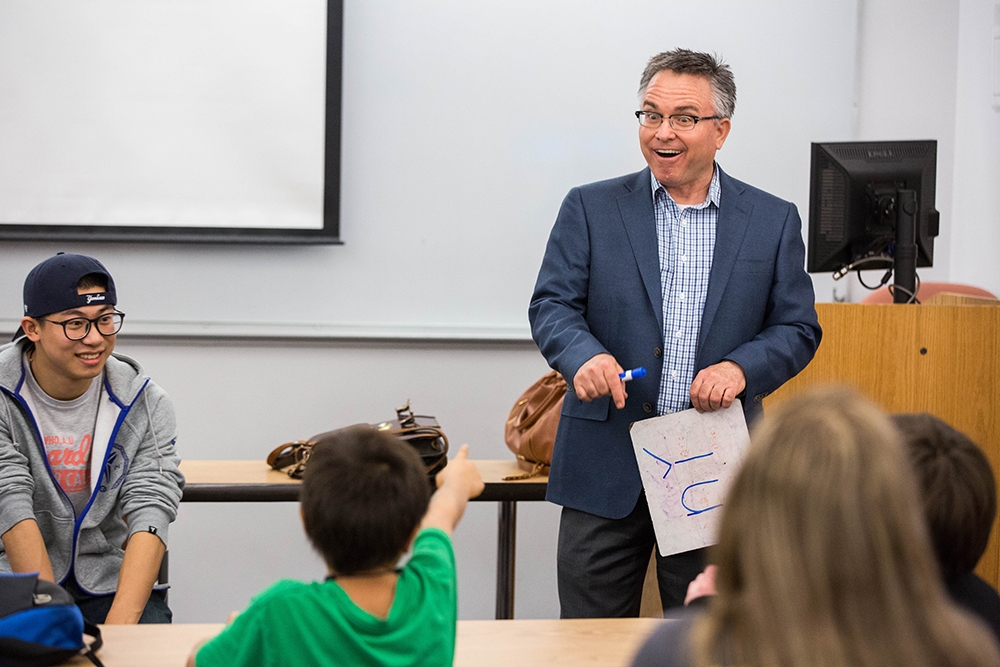 Professor William Brashears leads a lesson in Chinese at the Global Launch activity during Saturday's Night of the Open Door. Six-year-old Cora Bloomberg asks a question about blood-testing methods in the crime-scene activity hosted by the School of Mathematic and Natural Sciences. Cora's mother brought her and her brother to the Night of the Open Door for hands-on learning and to discover new interests. 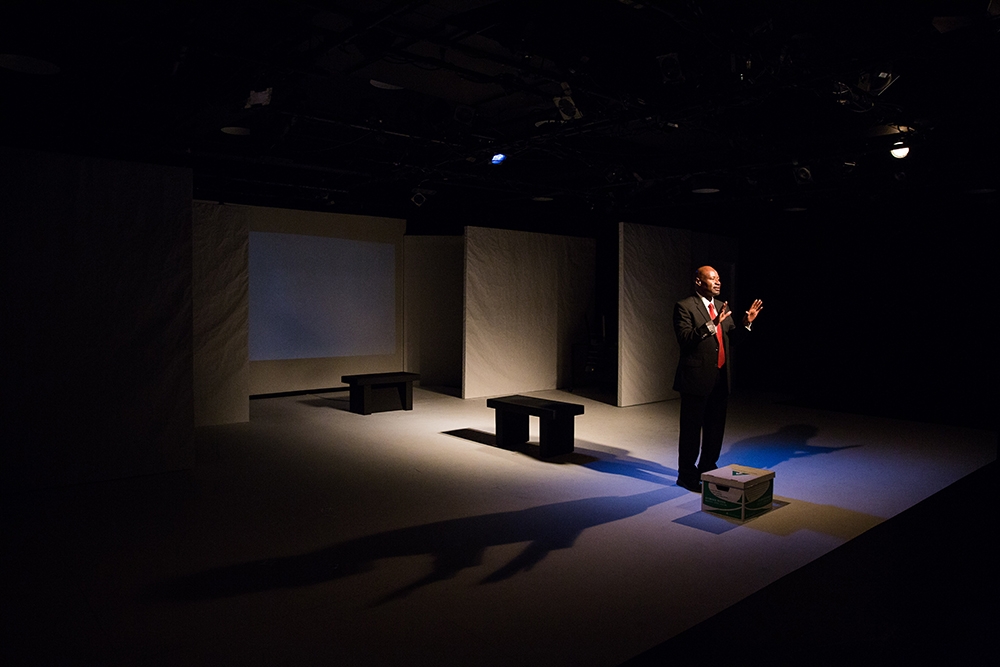 T. A. Burrows performs the opening monologue of the performance "Permanent Collection" during Night of the Open Door on Saturday.

If you missed the fun, don't worry: There are three more free Night of the Open Door events this month:

Read more about what's in store at each campus here, including information on the free app that can help visitors map out the activities they want to visit.

Check ASU Now after each event for photo galleries and video, and follow along as our crew shows all the fun on Snapchat (search for username: ASUNow). See photos from the Downtown Phoenix campus event here.

Top photo: Sebastian Flores listens for "Sammy's" breath at the nursing booth during Night of the Open Door on West Campus on Saturday evening.  Photo by Deanna Dent/ASU Now

ASU Law, which administers the award, first bestowed the O’Connor Justice Prize in 2014. It recognizes exemplary leadership in rule of law initiatives and honors the college’s namesake, the Honorable Sandra Day O’Connor, former U.S. Supreme Court justice and advocate for the rule of law and judicial independence around the world. 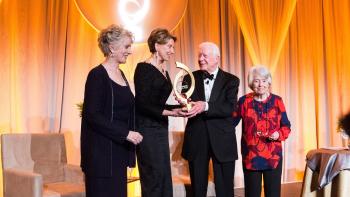 Past honorees include Ana Palacio, the first woman to serve as foreign affairs minister of Spain and former senior vice president and general counsel of the World Bank Group who is an ardent defender and protector of law, human rights and press freedom; and Navanethem “Navi” Pillay, United Nations high commissioner for human rights, the first non-white woman to serve on the High Court of South Africa and a successful advocate for establishing mass rape as a form of genocide.

The most recent prize winner is former U.S. President Jimmy Carter, who accepted the award at the O’Connor Justice Prize Dinner, a formal event held at the Arizona Biltmore on Jan. 27. At the event, Sandra Day O’Connor College of Law Dean Douglas Sylvester announced the Barretts’ philanthropic gift, which meets one of the college’s Campaign ASU 2020 goals: to sustain the prize in perpetuity.

“This extraordinary gift will help secure the O’Connor Justice Prize as an enduring tribute to the rule of law and those dedicated to promoting it,” said Sylvester. “Since its inception in 2014, the awards dinner has become a signature event for ASU Law, drawing honorees and dignitaries from around the world. We are so grateful that the Barretts’ generosity will ensure the viability of this world-class event into the future.”

Ambassador and Dr. Barrett are unwavering supporters of ASU. Among their donations is a gift — the largest made to the university at its time — that endowed Barrett, The Honors College, which a New York Times op-ed piece called the “gold standard” in honors education. She and five other Campaign ASU 2020 volunteer principals have collectively contributed more than $50 million to ASU since the start of the campaign.

“The spirit of ASU inspires me and so many others as ASU takes the lead as the New American University,” said Ambassador Barrett. “Justice O’Connor personifies energy, team spirit, hard work, talent and dedication. ASU’s O’Connor Justice Prize annually honors Arizona’s foremost jurist, Justice Sandra Day O’Connor, while it simultaneously celebrates another of the world’s leaders who also is dedicated to the values of justice, human rights and the rule of law.”

Like the initial two O’Connor Justice Prize recipients, Barrett and O’Connor are women of “firsts.” The former was the first female deputy director of the Federal Aviation Administration, the first female Republican to run for governor of Arizona and reportedly the first female civilian to land in an F/A-18 Hornet on an aircraft carrier. The latter was the first woman on the country’s highest court, serving from 1981 until her retirement in 2006.