Research examining the role that private governance can play in bypassing government gridlock on climate change has earned a pair of Vanderbilt University professors this year’s $10,000 Morrison Prize, which recognizes the most impactful sustainability-related legal academic article published in North America during the previous year.

Michael P. Vandenbergh and Jonathan Gilligan’s winning paper, "Beyond Gridlock," was published in the Columbia Journal of Environmental Law and will be presented at the Third Annual Sustainability Conference of American Legal Educators in May at the Sandra Day O’Connor College of Law at Arizona State University.

According to Vandenbergh and Gilligan, their winning article “demonstrates how a private governance wedge of emissions reductions can be achieved by expanding current corporate and household private governance initiatives and by launching new initiatives that address climate beliefs, motivations, and behavior.”

"'Beyond Gridlock' is the culmination of about ten years of work together in which we have sought to call greater attention to the obstacles to government action on climate change at the national and international scales, and to the largely neglected potential of actions by the private sector — businesses, other private organizations, and private citizens — to reduce greenhouse gas emissions even when governments fail to act," Vandenbergh said.

Gilligan added, "After last fall's election, we face the prospect that the U.S. federal government will withdraw from most efforts to address climate change. We believe that 'Beyond Gridlock' is more important than ever and we are very grateful for the Morrison Prize for recognizing this work and calling attention to it at this moment."

The Morrison Prize is administered through the Program on Law and Sustainability at the Sandra Day O’Connor College of Law at Arizona State University. It is named after its funder, Richard N. Morrison, co-founder of the Morrison Institute for Public Policy at ASU.

“ASU’s Program on Law and Sustainability is extremely fortunate that Richard Morrison has agreed to make this contest possible through his generous support,” said Troy Rule, faculty director of ASU Law’s Program of Law and Sustainability. “The Morrison Prize is drawing increased attention to sustainability-oriented legal academic research throughout the United States. This research plays a valuable role as federal, state, and local policymakers seek to integrate new sustainability technologies into their economies.”

The Morrison Prize is open to full-time law professors who have published environmental sustainability-related papers in printed U.S. or Canadian legal academic journals during the contest period. All eligible papers entered into the prize contest undergo independent review and scoring by a diverse group of full-time law professors who teach in environmental sustainability-related areas at four different accredited North American law schools.

Vandenbergh and Gilligan will collect their prize winnings at ASU’s Sustainability Conference on May 12, which will feature presentations by 50 law professors from throughout North America on their current academic legal research related to environmental sustainability.

“In three short years, the Sustainability Conference has emerged as an important contributing force on the legal and policy fronts of the environmental sustainability movement. Our selection process for presenting at the conference has become more competitive each year, and this increasing competition has elevated the quality of the conference content and the selectivity of our presenter list.  We couldn’t be more proud of what this conference has already become,” Rule said.

The Think Tanks & Civil Societies Program at the University of Pennsylvania’s Lauder Institute recently released its 2016 Global Go To Think Tank Index Report, ranking Arizona State University’s Consortium for Science, Policy & Outcomes in the top 10 worldwide among science and technology think tanks, as well as the top university-based science and technology think tank in the U.S.

This is the third consecutive year that the Consortium for Science, Policy & Outcomes has been ranked in the top 10 on this list in both categories, moving up one spot this year to ninth place in the worldwide science and technology think tank category. 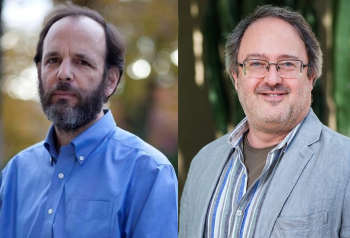 Daniel Sarewitz (left), director of the Consortium for Science, Policy & Outcomes, and David Guston, co-director of the consortium and founding director of ASU’s School for the Future of Innovation in Society. Download Full Image

“The results of this survey are gratifying in that they help us get the word out about the consortium’s initiatives and impact,” said Daniel Sarewitz, director of the Consortium for Science, Policy & Outcomes. “But of course we will continue to chart our success through our well-trained students, innovative ideas and real-world outcomes.”

Originally founded in 1999 and moved to ASU in 2004, the consortium brings together researchers, policy makers, practitioners and members of the public to develop the knowledge and tools to better understand and assess the linkages between scientific activities, policy decisions and effective outcomes.

“Keeping the company of the institutions at the top of this list is an endorsement of the extreme efforts and great talents of our faculty, staff and students,” said David Guston, co-director of the consortium and founding director of ASU’s School for the Future of Innovation in Society. “I’m thrilled on a daily basis to work with such an incredible group.”

ASU created the School for the Future of Innovation in Society in 2015 to provide an academic home for many of the consortium’s faculty and to deliver graduate degree programs that the consortium helped nurture. Aligned with ASU’s broad focus on innovation across disciplines and the design aspirations of a New American University, the school has since introduced undergraduate degree programs to its roster of academic offerings.