ASU alumnus Kaitlyn Fitzgerald is excited to be able to put her global studies degree from Arizona State University's School of Politics and Global Studies to good use in the workplace.

Fitzgerald currently works at Zero Mass Water, a renewable water company in Scottsdale dedicated to democratizing water with Source, solar panels that make water from air.  Working at a start-up company means Fitzgerald gets to wear many hats whether it be marketing, public relations or business development.  Her main task is telling the story of how Zero Mass Water impacts places around the world to provide water to everyone. 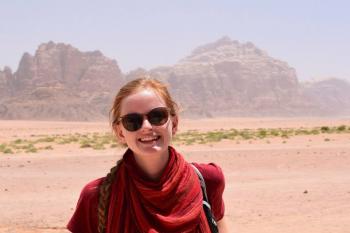 “Working for Zero Mass Water means I get to work with other people passionate about impacting the world,” shared Fitzgerald. “It’s a great fit for me and a supportive community to be a part of.”

One of the highlights during Fitzgerald’s time at Zero Mass Water was when she was able use her foreign language skills in a workplace setting.

All global studies students must complete a study abroad internship to earn their degree. Fitzgerald completed hers in Jordan since she was also studying Arabic at ASU.

“Being an SPGS student not only prepared me to represent our company abroad, but gave me the tools to help our company stand out amongst others,” said Fitzgerald.

Last year Fitzgerald traveled back to Jordan with her team at Zero Mass Water to install panels on the Royal Court building in Amman. While meeting with a Royal Court member, Zero Mass Water’s CEO asked Fitzgerald to do something she never anticipated having to do in her career; pitch their company and product in Arabic.

“For me, success is getting to apply my passions to make the world better and it’s a dream come true to make Arabic a part of that.”

Fitzgerald shard the curriculum in the School of Politics and Global Studies exposed her to new ideas and ways of thinking that helped her grow as a global citizen. Her studies at ASU provided her a perspective of the world that assists her career as she navigates the markets they are pursuing.

“Lately, I’ve been thinking about how fortunate students are to be in a university environment during this time of shifting global dynamics,” said Fitzgerald. “I truly believe I would not be where I am today without my ASU experiences, in and outside the classroom.”

Violence and persecution have forced more than 65 million people around the world to flee their homeland as refugees. That’s more than the combined populations of Arizona, California, Oregon, Utah, New Mexico and Colorado.The U.S. has welcomed more than 3 million refugees since the late 1970s, according to David Androff, an Arizona State University associate professor in the School of Social Wo... 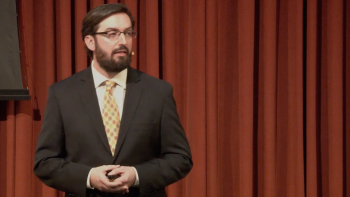