ASU recognized by WorldatWork as an employer of choice

“We are committed to investing in the health and well-being of faculty, staff and students at ASU,” said Jillian McManus, director of organizational health and development. “We strive to create a healthy environment for everyone through a combination of our formal benefits and our partnerships with ASU departments.”

The 2017 Seal of Distinction is awarded every year to companies across North America that set the standard for employee engagement that leads to business success. The overall strength of a company’s total rewards portfolio is evaluated along with the programs, policies and practices reflected in:

“We congratulate all of the recipients of the 2017 Seal of Distinction. This year, we saw the highest number of applicants since the Seal of Distinction was created,” said Anne C. Ruddy, president and CEO of WorldatWork in a press release. "I’m confident that this means an increasing number of companies are recognizing the importance of a workplace environment that benefits both the employer and employee.”

ASU Insight: Making of a Documentary

Filmmakers Bernardo Ruiz and Suree Towfighnia explore documentary storytelling’s impact on journalism.Bernardo Ruiz is a documentary director and producer. His directorial feature debut, "Reportero," (POV, 2013) about attacks on the press in Mexico, was nominated for a 2014 News and Documentary Emmy Award. It premiered at Full Frame (U.S.), IDFA (Europe) and Ambulante (Mexico). New York Magazine...

ASU Insight: Making of a Documentary 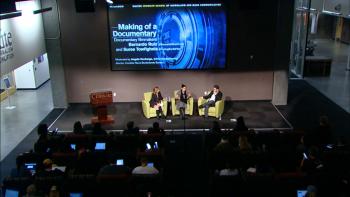 Bernardo Ruiz is a documentary director and producer. His directorial feature debut, "Reportero," (POV, 2013) about attacks on the press in Mexico, was nominated for a 2014 News and Documentary Emmy Award. It premiered at Full Frame (U.S.), IDFA (Europe) and Ambulante (Mexico). New York Magazine called it “a powerful reminder of how journalism often requires immense amounts of physical and psychological bravery.”

His second feature documentary, "Kingdom of Shadows" (POV, 2016) premiered at SXSW in the U.S. and IDFA in Europe.

“Many documentaries have chronicled the drug war in the U.S. and Mexico,” writes Slackerwood of the film, “but few have humanized it as poignantly as Kingdom of Shadows. [It] is more observant than crusading...rooted in first-rate journalism.”

In fall 2015, Ruiz was a filmmaker in residence at the Investigative Reporting Program (IRP) at the U.C. Berkeley Graduate School of Journalism. Previously he created and executive-produced the two part bilingual PBS series, “The Graduates/Los Graduados” (Independent Lens, 2013). Edutopia called it “a winner that should be seen by as many students, teachers and parents as possible.” Ruiz also wrote, directed and produced "American Experience: Roberto Clemente" (PBS, 2008), which was awarded the NCLR, “Alma” Award for “Outstanding Made for Television Documentary."

Suree Towfighnia is a director, producer, DP, and documentary educator from Chicago. She directed "Standing Silent Nation," a feature that chronicles a Native American family's struggle for economic empowerment by growing industrial hemp on their sovereign Reservation lands. A co-production with NAPT, it was broadcast on POV and garnered many awards in competitions and festivals. More recently, it has been the centerpiece of outreach and community engagement pushing for legislative change. Her thesis documentary, Tampico, about a low-income Latina street performer, won the Studs Terkel Award for Community Media.

As an educator, Suree works with at risk youth in the Chicago Public Schools as part of Project AIM; and teaches master classes in documentary making for universities, non-profits and internationally at EICTV in Cuba. She began the Lakota Media Project (LMP) in 2003 to train Lakota girls and women dedicated to telling their own documentary stories. Suree has been dedicated to working on social justice documentary and community engagement since 1997.

Every semester, the Cronkite School invites thought leaders in journalism and communications to share their experiences with students and speak about careers in media, the future of journalism, and issues and trends in the industry.

Must See Mondays happen at the: