At the beginning of the new year, many Sun Devils renew their focus on health and wellness. Arizona State University benefits-eligible employees may improve their health at little or no cost this new year. Whether committing to a new healthy path or continuing to be healthy and active, there is something for everyone.

Classes and screenings address physical, mental and emotional health. Classes are held during lunch on all campuses, and morning mini health screenings offer immediate results. View and sign up for classes. Sign up to receive monthly email updates about wellness on your campus. 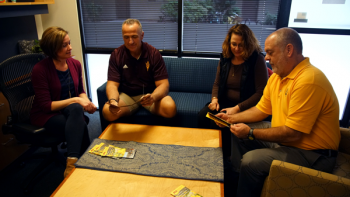 Three ASU employees took advantage of these benefits and made healthier choices that positively impacted their lives.

Health education can change your life

For Joe Beuther, a Parking and Transit Services office specialist, attending a screening was a wake-up call. Four years ago, Joe was unhealthy and unhappy. After attending a mini health screening, Joe lost more than 100 pounds and has a new outlook on life. Beuther attributes what he calls a “miracle” to getting healthy in all aspects of his life.

“I’ll never be 21 years old again, but I can do things now that I couldn’t do four years ago,” Beuther said. “The encouragement and support of the wellness office had a positive impact on my life, and I’m much easier to be around these days.”

“The screenings are an easy way to regularly track your health and wellness so you know when adjustments are needed,” Badalamenti said.

Tom Dobrick, Ira A. Fulton Schools of Engineering HR specialist, first participated in a regularly scheduled mini health screening three years ago and improved over time. He was impressed with the compassionate, educated staff members.

“The first screening I attended was easy to schedule, available on campus, well-organized and took a minimal amount of time,” he said. “I encourage even those who think they’re healthy to take advantage of this service.”

Employees like Delia Saenz, psychology associate professor, participate in screenings and classes as part of her healthy lifestyle.

“Attending the screenings and various classes supports my healthy lifestyle. I’ve learned skills for stress management, organizational skills and received motivation to stay on track,” she said. “I appreciate that the program is free, high-quality, conveniently located and there’s ongoing support.”

Saenz also participates in the Health Impact Program. The incentive-based program rewards benefits-eligible employees with as much as $200 when they participate in screenings or classes.

Classes include healthy eating, physical fitness and mental health. Whether cooking in or eating out, healthy eating can be fun and affordable. Employee fitness classes are abundant and diverse, and more classes are available at Sun Devil Fitness Centers. Mental and emotional health are all part of a healthy lifestyle.

A full listing of screenings and classes for ASU employees is available on ASU Events.

Editor's note: This story is being highlighted in ASU Now's year in review. To read more top stories from 2017, click here.Arizona State University’s Psyche Mission, a journey to a metal asteroid, has been selected for flight, marking the first time the school will lead a deep-space NASA mission and the first time scientists will be able to see what is believed to be a planetary core.  The mis... 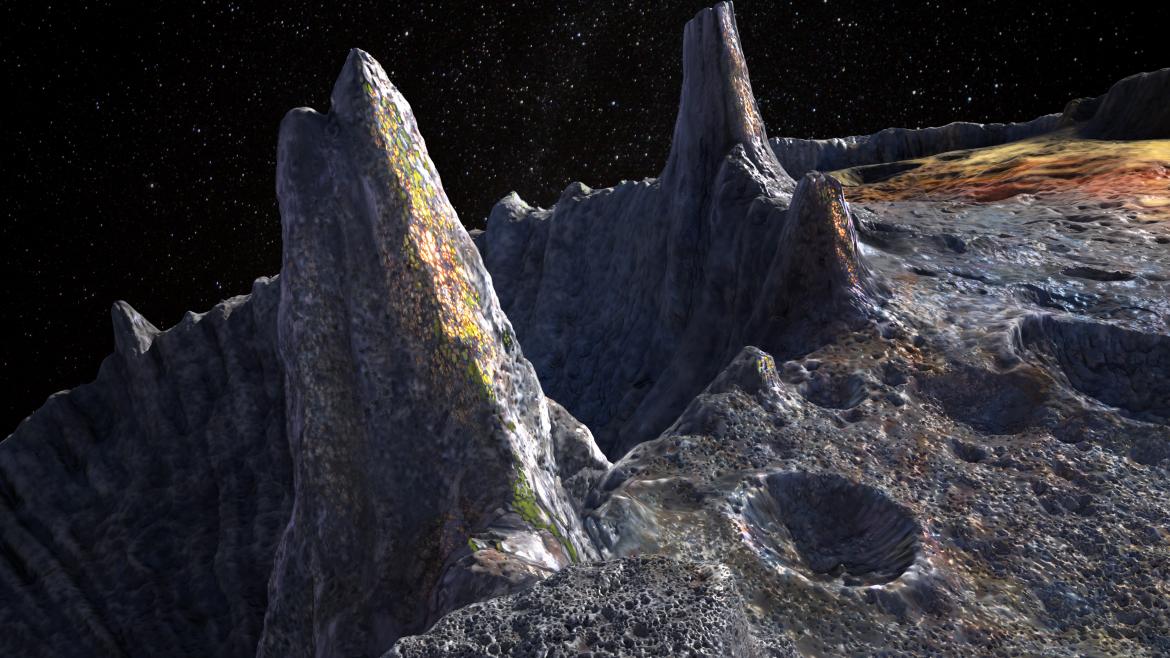 Arizona State University’s Psyche Mission, a journey to a metal asteroid, has been selected for flight, marking the first time the school will lead a deep-space NASA mission and the first time scientists will be able to see what is believed to be a planetary core.

The mission’s spacecraft is expected to launch in 2023, arriving at the asteroid in 2030, where it will spend 20 months in orbit, mapping it and studying its properties.

It will be part of NASA’s Discovery Program, a series of lower-cost, highly focused robotic space missions that are exploring the solar system. The Psyche project is capped at $450 million.

“This mission, visiting the asteroid Psyche, will be the first time humans will ever be able to see a planetary core,” said principal investigator Lindy Elkins-Tanton, director of ASU’s School of Earth and Space Exploration (SESE). “Having the Psyche Mission selected for NASA’s Discovery Program will help us gain insights into the metal interior of all rocky planets in our solar system, including Earth.”

Psyche, an asteroid orbiting the sun between Mars and Jupiter, is made almost entirely of nickel-iron metal. As such, it offers a unique look into the violent collisions that created Earth and the other terrestrial planets.

The scientific goals of the Psyche mission are to understand the building blocks of planet formation and explore firsthand a wholly new and unexplored type of world. The mission team seeks to determine whether Psyche is a protoplanetary core, how old it is, whether it formed in similar ways to the Earth’s core, and what its surface is like.

“The knowledge this mission will create has the potential to affect our thinking about planetary science for generations to come,” ASU President Michael M. Crow said. “We are in a new era of exploration of our solar system with new public-private sector partnerships helping unlock new worlds of discovery, and ASU will be at the forefront of that research.”

Psyche — a window into planetary cores

Every world explored so far by humans (except gas giant planets such as Jupiter or Saturn) has a surface of ice or rock or a mixture of the two, but their cores are thought to be metallic. These cores, however, lie far below rocky mantles and crusts and are considered unreachable in our lifetimes.

Psyche, an asteroid that appears to be the exposed nickel-iron core of a protoplanet, one of the building blocks of the sun’s planetary system, may provide a window into those cores. The asteroid is most likely a survivor of violent space collisions, common when the solar system was forming.

Psyche follows an orbit in the outer part of the main asteroid belt, at an average distance from the sun of about 280 million miles, or three times farther from the sun than Earth. It is roughly the size of Massachusetts (about 130 miles in diameter) and dense (7,000 kg/m³).

“Being selected to lead this ambitious mission to the all-metal asteroid Psyche is a major milestone that reflects ASU’s outstanding research capacity,” said Sethuraman Panchanathan, executive vice president and chief research and innovation officer at ASU. “It speaks to our innovative spirit and our world-class scientific expertise in space exploration.”

The spacecraft's instrument payload will include magnetometers, multispectral imagers, a gamma ray and neutron spectrometer, and a radio-science experiment. 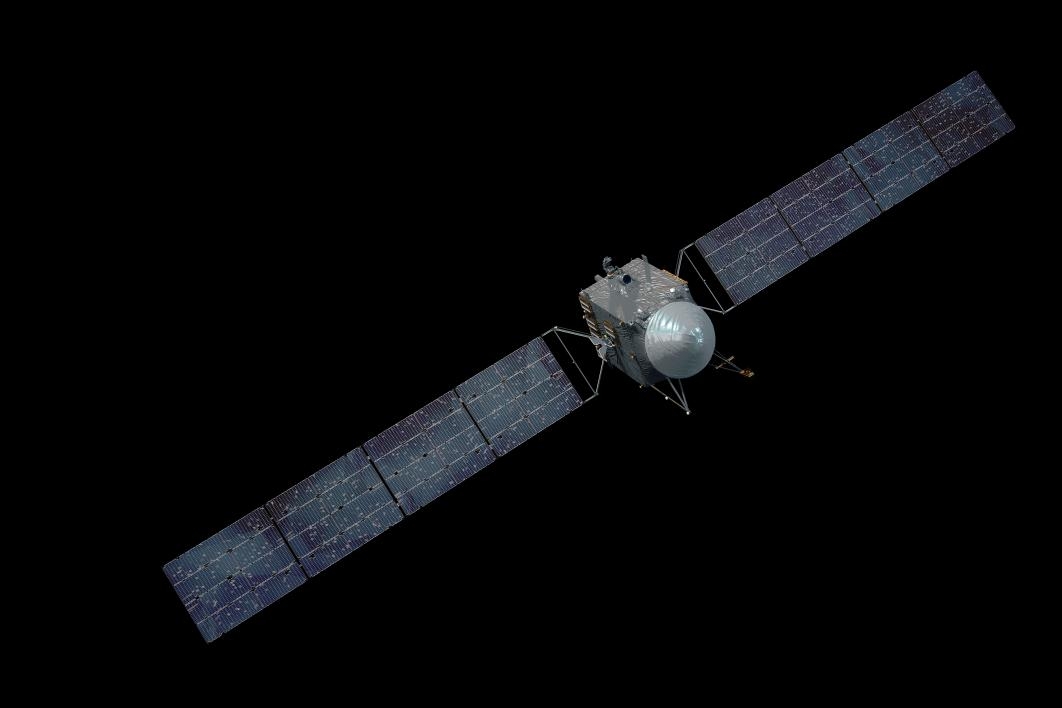 The Psyche mission spacecraft will include a multispectral imager, which will be led by an ASU science team and will provide high-resolution images using filters to differentiate between the asteroid’s metallic and silicate components. 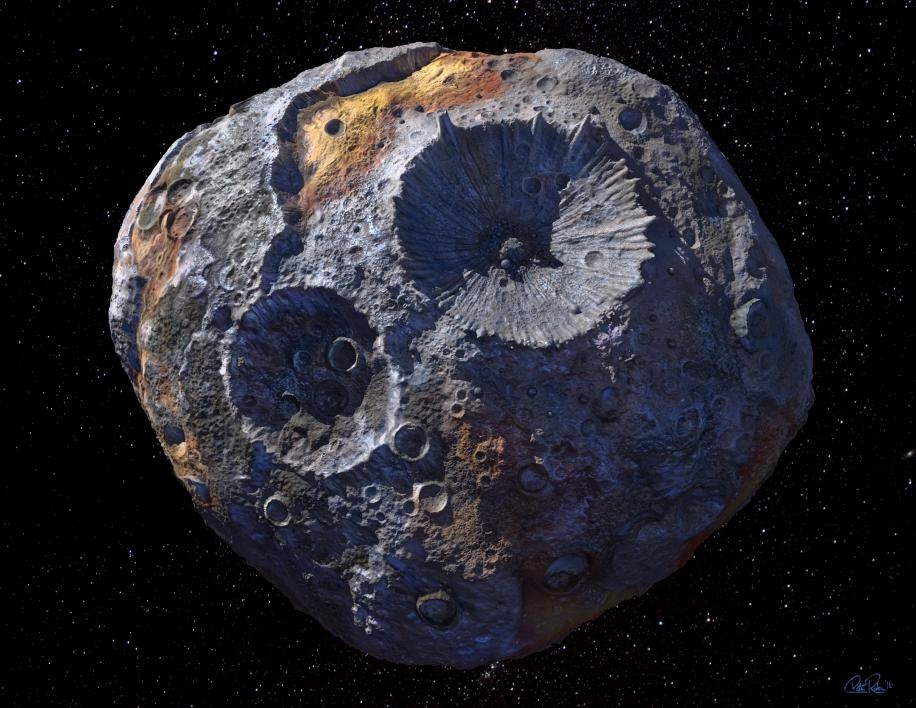 Artist rendition of the asteroid Psyche. 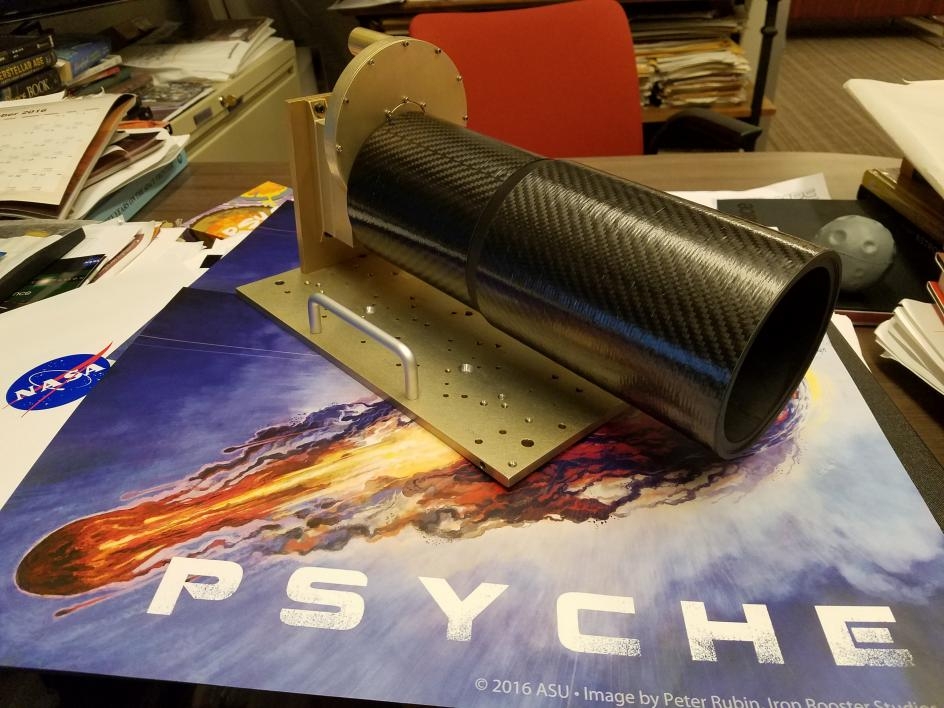 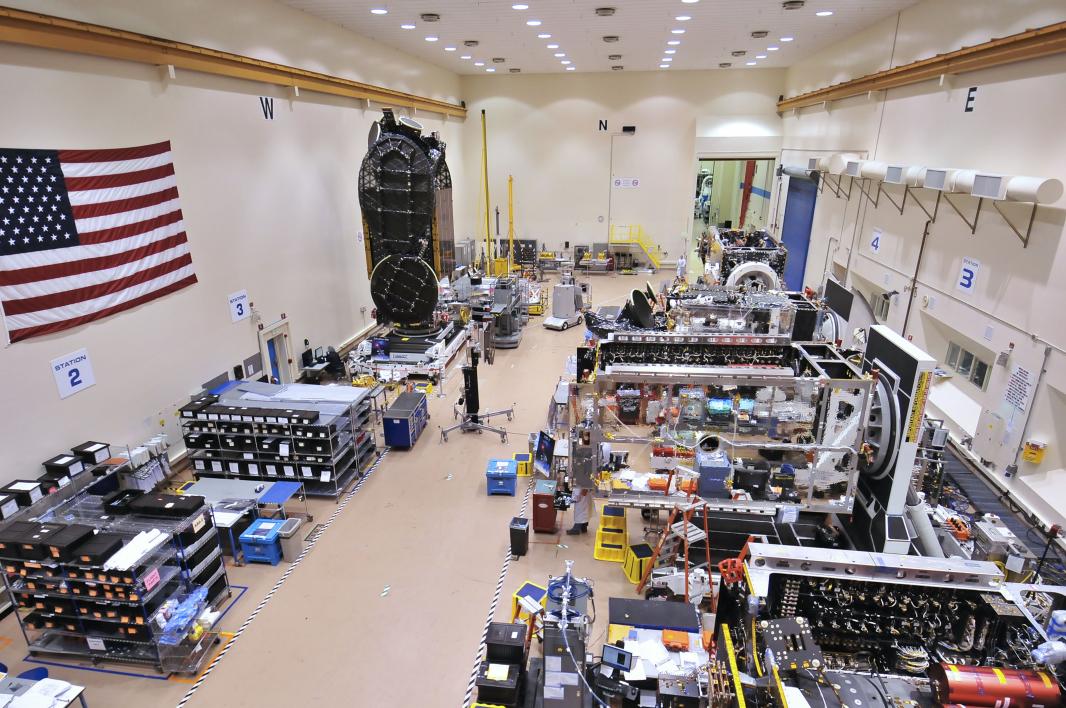 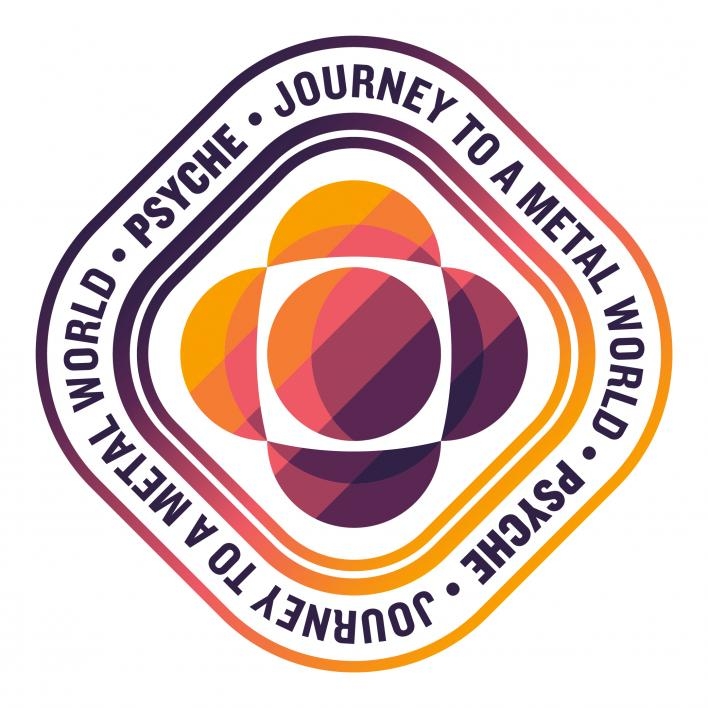 The multispectral imager, which will be led by an ASU science team, will provide high-resolution images using filters to discriminate between Psyche's metallic and silicate constituents. It consists of a pair of identical cameras designed to acquire geologic, compositional and topographic data.

The gamma ray and neutron spectrometer will detect, measure and map Psyche's elemental composition. The instrument is mounted on a 7-foot (2-meter) boom to distance the sensors from background radiation created by energetic particles interacting with the spacecraft and to provide an unobstructed field of view. The science team for this instrument is based at the Applied Physics Laboratory at Johns Hopkins University.

The magnetometer, which is led by scientists at MIT and UCLA, is designed to detect and measure the remnant magnetic field of the asteroid. It’s composed of two identical high-sensitivity magnetic field sensors located at the middle and outer end of the boom.

The Psyche spacecraft will also use an X-band radio telecommunications system, led by scientists at MIT and NASA’s Jet Propulsion Laboratory. This instrument will measure Psyche's gravity field and, when combined with topography derived from onboard imagery, will provide information on the interior structure of the asteroid. 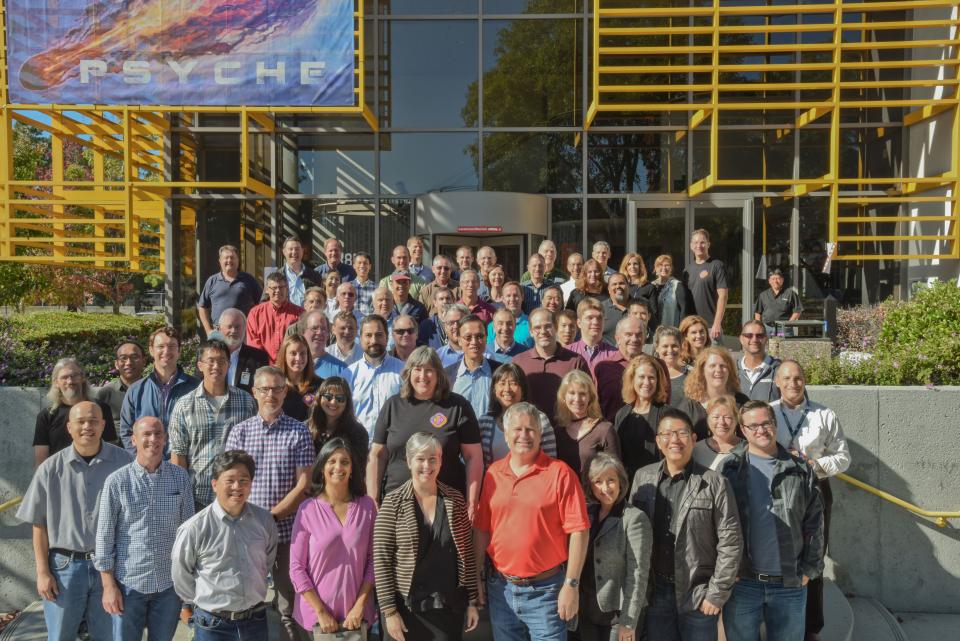 Top photo: Artist rendition of the surface of the asteroid Psyche. Image by Peter Rubin/ASU