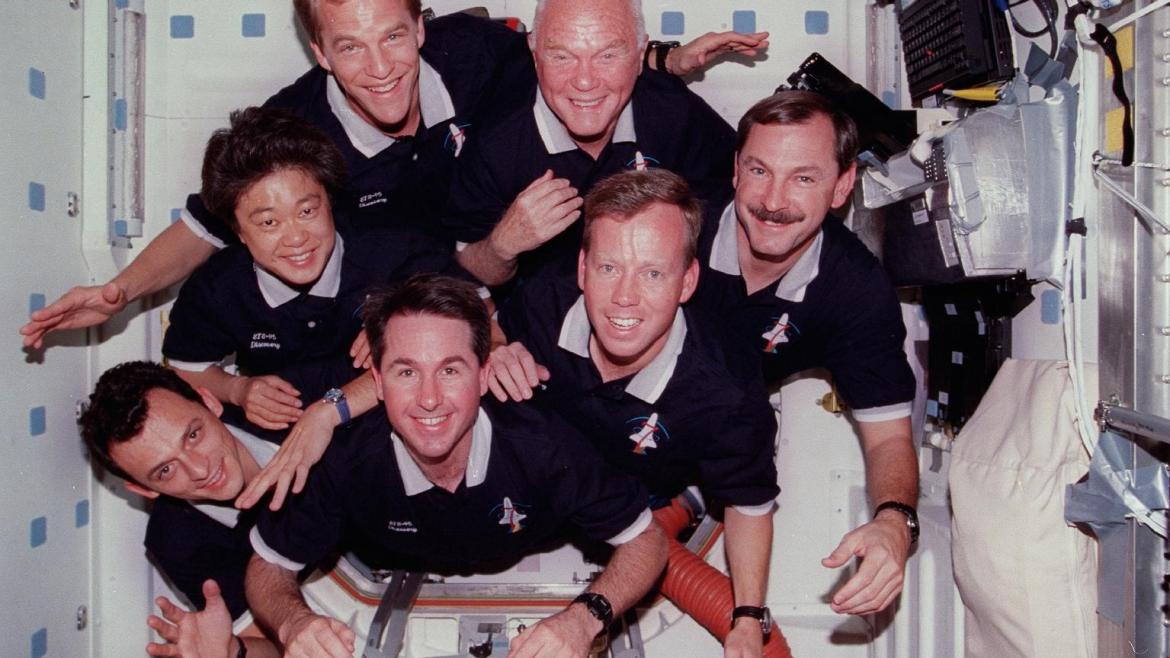 'One of the greatest Americans of our time'

ASU's university explorer Scott Parazynski remembers the life of John Glenn.
John Glenn was an American hero and everything a fan could hope he would be.
December 8, 2016

John Glenn, the NASA astronaut and former U.S. senator, whose feats in the 1960s earned him entry into an elite club of bona fide American heroes, died Thursday at the age of 95.

Glenn was the last surviving of the original seven American astronauts. His flight three times around Earth in 1962 made him the first American to orbit the planet, captivating the nation.

He went on to a more than two-decade career representing his home state of Ohio in the Senate and, in 1998, returned to space setting a new record — that of the oldest American astronaut.

It was preparing for that flight, STS-95, that 77-year-old Glenn became colleagues and friends with Scott Parazynski, an astronaut, physician and now ASU university explorer and a professor of practice in the Ira A. Fulton Schools of Engineering.

Parazynski called Glenn a true American patriot and “one of the greatest Americans of our time.” In a conversation with ASU Now, he remembers Glenn and reflects on his life and what his passing means for the country.

Question: When did you first meet John Glenn?

Answer: I first got to spend time with him in January of 1998 after he became part of our crew. He walked in to the crew in a really unique and funny way. He said, ‘If any of you guys call me Sen. Glenn, I’ll ignore you. My name is just John or Payload Specialist No. 2.' That kind of set it. He just wanted to be one of the crew, no special treatment or favors. A very down-to-earth, humble guy.

Q: You’ve said that he had inspired you before you met. Was he the icon that you expected?

A: Much more. You imagine a persona based on what you see in movies — and the only rendering we had was grainy black-and-white movies and 'The Right Stuff.' We have this perception of what he must be like; I realized he had a great patriotism about him and a real sense of mission in life. But once I got to know him, I found out he was extraordinary in many, many ways. As a pilot, as an engineer, as a statesman. He really cared about people and was an amazing character.

Q: How did he operate on board the space shuttle?

A: He wanted to be a contributing, full member of the crew, which is pretty unusual for a payload specialist. Payload specialists often would come on board and have their particular science to do and limited additional training. But he jumped in with both feet. When he started training, he was still active in the Senate, then devoted full-time to training after he retired. He really wanted to be an integral part of the mission; that included routine chores that are part of everyday life in space, and some of the jobs are not so glamorous. This was a celebrated American icon, but he just wanted to be Payload Specialist No. 2. His joke was, ‘I’m just one step ahead of Payload Specialists 3 and 4.” He was very self-deprecating.

Q: How did you work with him as his personal physician?

A: He was involved in 10 different life-science experiments, ranging from sleep studies to analyses of his immune system looking at cardiovascular adaptation and [other] functions. A number of blood draws were required during the flight and he had to be instrumented with sleep gear on his body and EEG harnesses that I’m sure were not very comfortable. But he never complained. Then of course there was the concern that this was a 77-year-old man going into an extreme environment: What if something were to happen to him? Thankfully, he was in extremely fit condition, so I didn’t have grave concerns about him managing accelerations or living and working in space. But who knows? Nobody had ever done that before. I’ve often said if something happened to John, I might as well not come home.

Q: Does any personal story stand out for you?

A: Sure. He was a dear friend and a great spirit. Sharing an intense experience like that ties you together for life. But one of the fun memories that I have of him was that — while he was a test pilot and a marine and a war hero — he was kind of a wimp when it came to needles. So one of the things I did was to sneak aboard a pair of Halloween Dracula fangs and spooked him on the flight when I was about to draw blood. We talked about that pretty much every time we saw each other in the years after. He called me Dracula or Count Parazyn-scula. He was really a humble giant among men.

Q: How important was John Glenn to NASA and the space program?

A: He took on one of the most outlandishly dangerous missions of all time when he rode Friendship 7 into orbit. It was the first orbital flight that the Americans had flown and two prior flights had blown up, you know? So the stakes were high. But he was an American patriot first and a Marine: He assessed the risk and the value of the mission and went on. Just as he had as a fighter pilot in wartime, then fought for what he thought was right over 24 years in the United States Senate, and then came back again to fly on the shuttle, which was not a trivial risk either. He was first and foremost a true American patriot, one of the greatest Americans of our time.

Q: What does his passing mean, for you and the country?

A: I feel a great void. It is a personal loss and a national loss. He was a real treasure to those who knew him and those who knew of him and what he had done. I think for future explorers and hopefully for future statesmen — and we certainly need statesmen in this day and age who can bring us together — he is a role model. There is a lot that has been written about him and lots of ways we can learn from his successes.

Arizona State University’s fall commencement will be a mix of new and old this week.ASU is awarding about 5,200 undergraduate and 1,800 graduate degrees in several ceremonies. The main undergraduate commencement is Monday at Wells Fargo Arena.Among the new ceremonies is the first commencement of the Sandra Day O’Connor College of Law to be held in the new Beus Center for Law and Society on the... 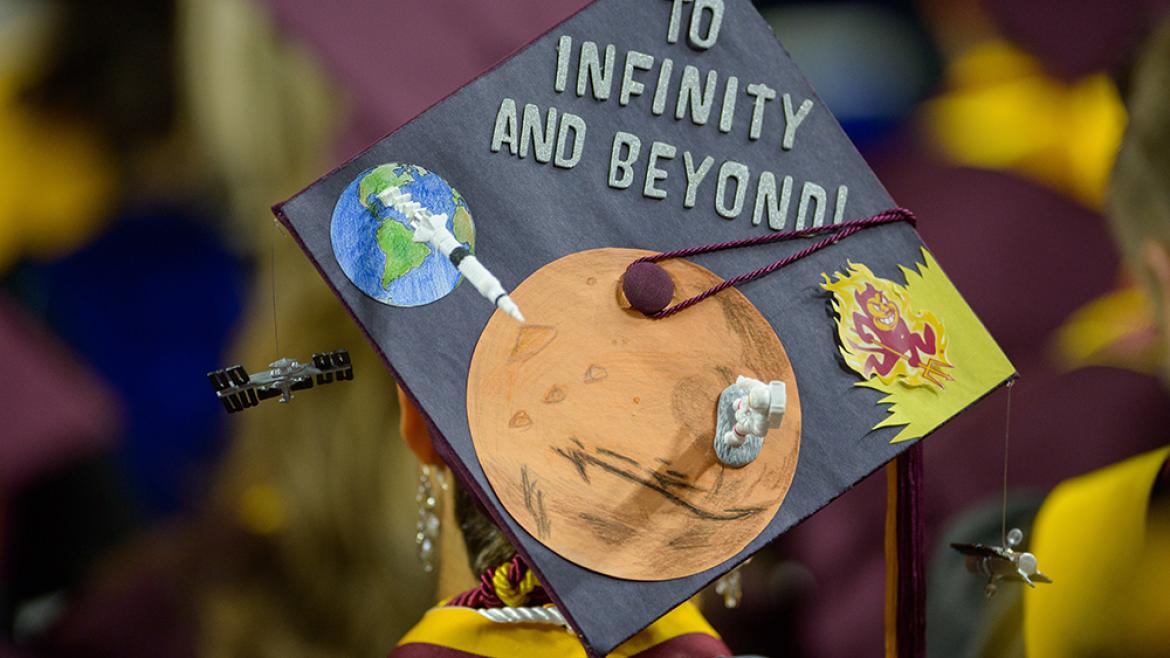 University will award more than 7,000 degrees; law school to mark first convocation in new Beus Center for Law and Society

Arizona State University’s fall commencement will be a mix of new and old this week.

ASU is awarding about 5,200 undergraduate and 1,800 graduate degrees in several ceremonies. The main undergraduate commencement is Monday at Wells Fargo Arena.

Among the new ceremonies is the first commencement of the Sandra Day O’Connor College of Law to be held in the new Beus Center for Law and Society on the Downtown Phoenix campus. The six-floor building opened in August. 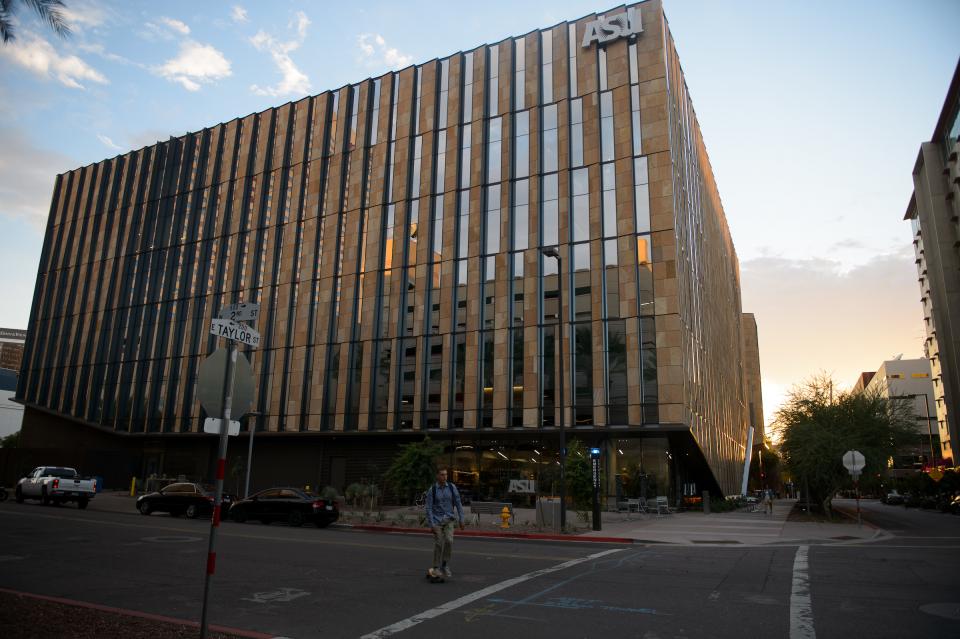 The Beus Center for Law and Society opened in August.

“We can’t think of a better way to demonstrate, very tangibly, the impact of connecting law and society as we usher the next generation of lawyers as well as students who have mastered legal principles to employers in our downtown community and across the country,” said Douglas J. Sylvester, dean of the law school, whose students donate more than 100,000 hours of pro bono work collectively.

The convocation for the law school’s 74 graduates will be held Wednesday, and will recognize Devin Jacob Garza for more than 170 hours of pro bono work with the Maricopa County Attorney’s Office.

Among the oldest traditions will be the Parade of International Flags at the Thunderbird School of Global Management, which became part of ASU in 2015 after nearly 50 years as a private graduate school. In that ceremony, which dates to 1977, graduates carry the flags of their home countries during the convocation, which will be held Wednesday at the Glendale campus.

ASU welcomes a diverse student population, and several events are scheduled to recognize them, including American Indians, Asian and Asian Pacific Americans, black and African, Hispanic, veterans and international students. Click here for the complete schedule. Visit here for the list of events at individual colleges and schools.

While commencement wraps up years of hard work at ASU, for some students, it’ll be their first time on campus. ASU Online is awarding about 550 undergraduate degrees, including more than 200 enrolled in the Starbucks College Achievement Plan, and about 740 graduate degrees.

One of the graduates is Devon Probol, who completed her bachelor’s degree in history, with a minor in religious studies, in two and half years while posted in Australia for the U.S. Department of State. She worked as a security assistant for the U.S. embassy in Canberra.

Probol, who is attending commencement events, got her first look at the Tempe campus last week.

“I was shocked at how beautiful it is,” she said. “I called my mom and said ‘It’s is so weird that this is my alma mater, but the first time I’m seeing it is my graduation.”

Probol said the ASU Online program was clear and logical and allowed her to take a full load of classes while working full time.

“It made a lot more sense to me, personally. I really enjoyed that everything was laid out. There was no room to misunderstand what is expected of you,” she said.

Thousands of graduates will go into the workforce well prepared by their education at ASU, which was ranked ninth in the nation for graduate employability by the Global University Employability Survey 2016. Many students are able to study across disciplines at ASU.

Electrical engineering major Ngoni Mugwisi, who is from Zimbabwe and won a Rhodes Scholarship, was one of them.

“This opportunity to cross between disciplines, whether in engineering, entrepeneurship, and all the collaboration efforts I’ve found here at ASU, they’ve been really inspiring. It’s an enabling environment to be the best anyone can do.”