If you’re Laura Hosman, bringing educational resources to rural areas is what you do.

This week, Hosman is traveling to Tonga, where she and her team will deliver 25 portable, solar-powered, Wi-Fi-ready digital library devices called SolarSPELL — the Solar Powered Educational Learning Library — which is helping to expand access to education and technology in remote places around the world that lack electricity and the internet. 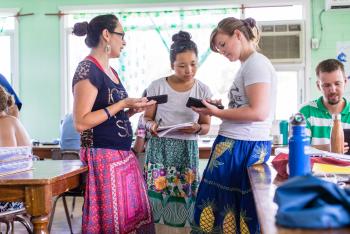 Hosman, an assistant professor at ASU with a joint appointment in the School for the Future of Innovation in Society and the Ira A. Fulton Schools of Engineering, is traveling with five undergraduate students — four engineering students from the Polytechnic School, one of the six Fulton Schools, and one film student from the Herberger Institute for Design and the Arts — as well as Lorrie McAllister, an assistant university librarian at ASU Libraries.

“We’ve been preparing for this trip all semester,” said Hosman. “In addition to bringing digital libraries to Tonga, the visit is meant to conduct research, create hands-on lesson plans and take part in workshops that will focus on building libraries specific to the Pacific Island communities.”

The innovative library device is 100 percent self-reliant: generating its own solar power and Wi-Fi hot spot and using its own tiny computer, called a Raspberry Pi, that functions as a server connecting to library content via smartphone, laptop or iPad.

Because the SolarSPELL website functions as a local digital library — providing thousands of resources in the form of videos, articles, books, lessons and instructional guides — the selection of educational content and how the technology is introduced to the community is crucial.

Hosman thus relies on the expertise and local knowledge of U.S. Peace Corps volunteers, who are stationed in the remote locations she is trying to reach. Her strong partnership with the Peace Corps has resulted in the delivery of more than 100 SolarSPELL units in Samoa, Vanuatu and Micronesia.

“The Peace Corps has served an essential role in providing access to these digital libraries, as they often understand the needs of the community and local educational environment,” said Hosman.

Peace Corps staff and volunteers in Tonga will be working with Hosman and her students to develop learning objectives around library content as well as sample instructional programming. In addition, Hosman’s partnership with ASU Libraries has also helped to curate SolarSPELL content. 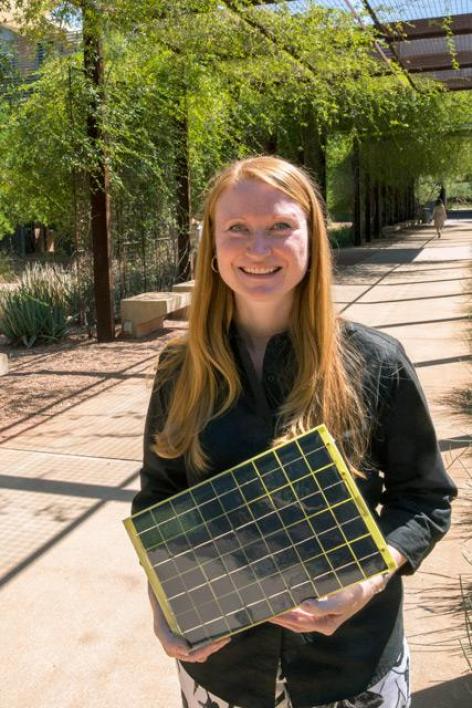 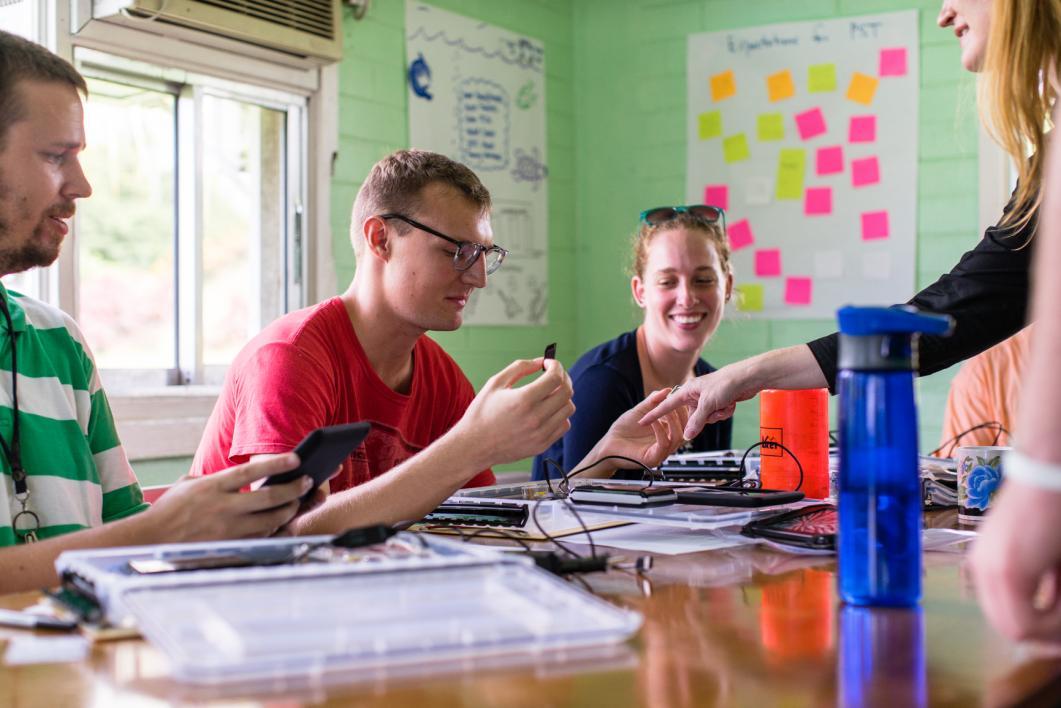 Hosman (right) works with students and U.S. Peace Corps volunteers in a training session in Micronesia, where SolarSPELL devices have been delivered. This fall ASU Libraries hosted a hackathon to improve SolarSPELL in terms of content, organization and technology.

This fall, ASU Libraries hosted its first SolarSPELL Hackathon to support the curation of educational content for schools in Tonga. It was an opportunity for library staff to partner with Hosman and her students to further improve the digital library experience through new content and its improved organization, as well as enhancements to the technology platform. The Hackathon also resulted in discussion of creating lesson plans for teachers to empower students to save and share their cultural and artistic expressions as well as their family heritage.

“It is wonderful to partner with ASU Libraries to help deliver high-quality and specifically curated digital educational resources to teachers and students in areas with severely limited electricity, connectivity and even textbooks,” said Hosman.

McAllister said she is looking forward to engaging with students, educators and librarians in Tonga’s capital city of Nukuʻalofa to help understand their local context and greatest opportunities and challenges.

“This trip will be a valuable lesson in the curation of digital libraries,” McAllister said. “We will be finding out what topics the students of Tonga are interested in discovering and how they see themselves using digital libraries for learning. Dr. Hosman’s work is very exciting in terms of a creative way to expose new audiences to digital library resources and empower people by using libraries as catalysts for learning.”

Hosman, McAllister and the team of ASU students will be traveling Dec. 6-18 with a brief stop in New Zealand at the University of Auckland, where they will take part in a digital storytelling workshop.

The students plan to video-journal their experiences while traveling abroad.

Soon after arriving at the 2016 International Genetically Engineered Machine Giant Jamboree to showcase the project they had worked on for several months, the undergraduate students representing Arizona State University’s iGEM team got a shocking surprise.Their two graduate student advisors had been mistaken for team members, so the three undergraduates were placed in the graduate level of the i...

Ira A. Fulton Schools of Engineering , School for the Future of Innovation in Society , Entrepreneurship , Education

Soon after arriving at the 2016 International Genetically Engineered Machine Giant Jamboree to showcase the project they had worked on for several months, the undergraduate students representing Arizona State University’s iGEM team got a shocking surprise. 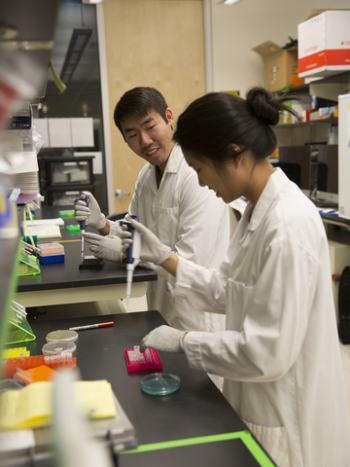 Jimmy Xu (left) and Jiaqi Wu demonstrate some of the lab procedures they performed in conducting research for their team's iGEM competition project. Photo by Jessica Hochreiter/ASU Download Full Image

They would be up against more experienced rivals, many of them veterans of iGEM contests.

The three-day competition is the largest and most prominent test of students’ skills in synthetic biology. The fast-emerging field uses advanced cell engineering techniques to develop solutions to major health challenges, as well as new ways to produce energy, fabricate materials and more.

The iGEM event helps to fuel the advancement of synthetic biology with fresh ideas contributed by the undergraduate scientists-in-training.

Students from some of the world’s most prestigious colleges and universities were among the approximately 5,600 students on about 300 teams from 42 countries who came in Boston recently for the annual iGEM gathering.

Dennison is a biomedical engineering major in ASU’s Ira A. Fulton Schools of Engineering and a microbiology major in the School of Molecular Sciences.

Wu and Xu are students in ASU’s Barrett, the Honors College. Wu is a computer science major and Xu is chemical engineering major in the Fulton Schools. Xu is also studying molecular biosciences in the School of Life Sciences.

They went into the competition armed with the results of the team’s project: Diverse Homoserine Lactone Systems for Cellular Communication.

The iGEM competition requires students to carry out comprehensive projects that detail their new synthetic biology system from initial development and wet-bench research to final deployment, including consideration of the anticipated impacts of their new system on society.

The most competitive projects meaningfully explore the biosecurity and policy issues that would be involved in adequately governing the practice of particular kinds of synthetic biology work.

Each team is required to develop and share “BioBricks,” genetic materials that are building blocks for constructing more complex genetic systems.

The ASU team’s research was based on a genetic system that enables bacteria to communicate with one another using small molecules known as N-Acyl homoserine lactones, or AHLs.

The molecules act as signals that travel from one bacterium to the next, activate genes in the bacteria, and thereby alter cell behaviors within groups of bacteria.

This signaling is called quorum sensing, a term describing how bacteria coordinate the genes that influence their behavior depending upon the density of their population.

The team produced six new BioBricks derived from quorum sensing systems of different species of bacteria. These BioBricks can potentially be used to build complex artificial gene circuits in which each unique signal activates different steps in the circuit.

In addition, the team’s report looked at the biosafety implications of using homoserine lactones to artificially control bacteria.

Working with nature to solve problems

The project’s outcome definitely opened the door to some ideas for a way to more precisely control communications among bacteria, said the team’s student mentor, Cassandra Barrett, who is pursuing a doctoral degree in biological design in the Fulton Schools.

“What we want is to have a signal that talks only to a specific receiver and not have the message spread out among several receivers,” she explained.

“It’s about discovering how to make natural processes work the way we want them to so we can solve problems,” said team member Ernesto Luna, a biochemistry major in the School of Molecular Sciences.

If communications between bacteria could be better controlled, he said, ‘‘You could make new biosensors. You could have cells that detect signals that are signs of certain diseases.”

Luna produced a substantial amount of the data that the team used in its presentations at the iGEM competition. 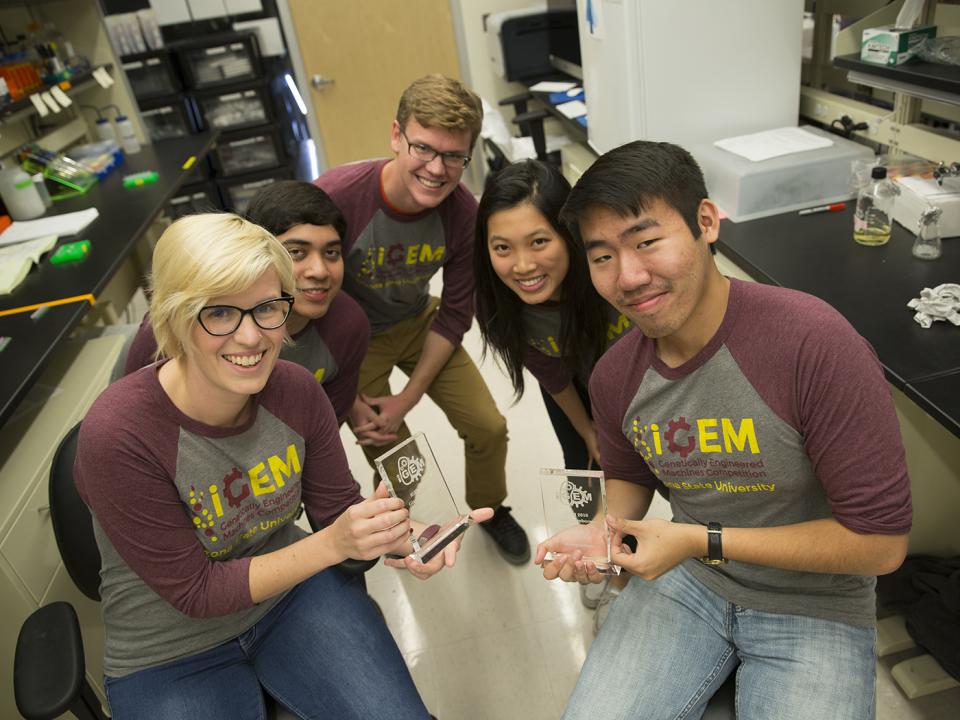 What the students produced together was “fantastic,” said the team’s faculty mentor Karmella Haynes, a synthetic biologist and an associate professor of biomedical engineering.

The competition judges obviously agreed. Even though the undergrads’ work was measured against the projects of grad students, the ASU squad won more awards than any of the four previous teams that have represented ASU at the iGEM event.

• Best New Basic Part award for development of a high-impact DNA fragment that is likely to see wide use in future research.

• Best Part Collection award for development of several DNA fragments that can be used for customized engineering.

• Biosafety Commendation for the team’s investigation of the impact of small-molecule signals on microbes in the environment. Some of the DNA fragments used to produce those signals were made by the ASU students.

The team was also one of the finalists for the “Best in Track: Foundational Advance” award and the “Best Integrated Human Practices” award.

In addition, the 2016 ASU team was among those that earned the iGEM competition’s Gold Medal for outstanding overall performance in meeting the rigorous criteria of the various aspects of the contest — encompassing both technical achievement and incorporating consideration of societal impacts into project design.

High expectations for next competition

“I was approached by several judges who expressed praise for how well ASU did,” Haynes said, adding that an FBI official told her he was particularly interested in the biosafety concerns the students raised as part of their project.

Their accomplishment inspired Haynes’ confidence in the outlook for the team in 2017.

“Next year we hope to win ‘Best in Track’ and even the coveted BioBrick Trophy for the best project worldwide,” Haynes said.

The students “know a whole lot more about synthetic biology than when they started this project” in the spring, Barrett said. “All that new knowledge will be a springboard for next year’s project.”