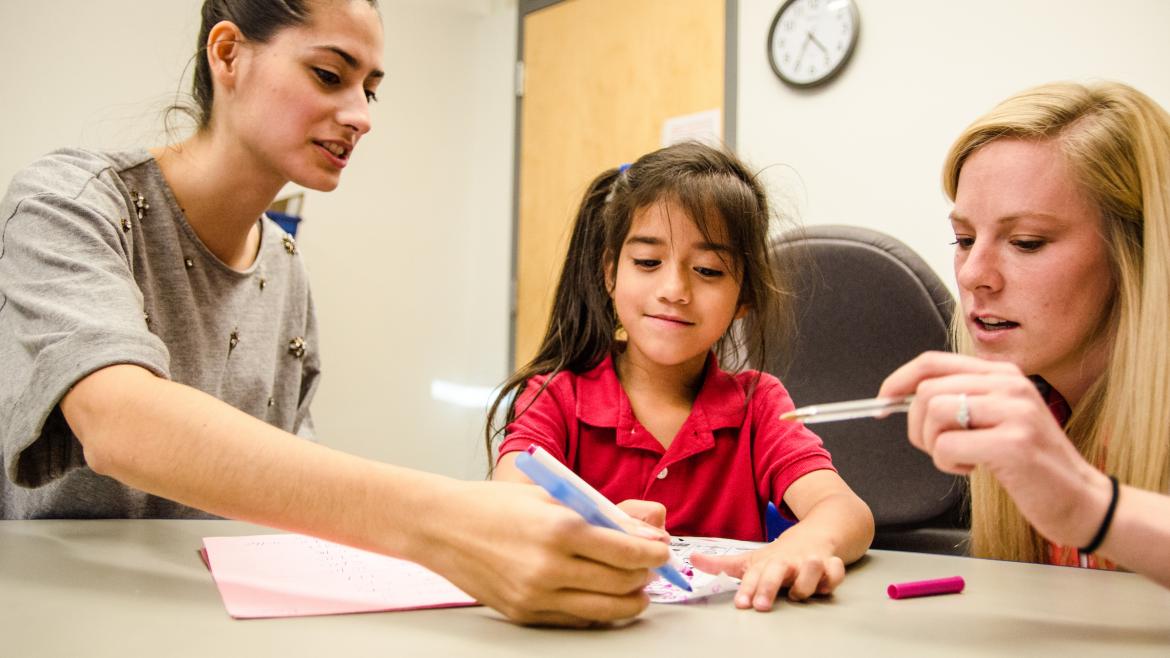 A group of toddlers sits in a circle, singing and passing around maroon and gold pom poms. When the they come around to a shy 2-year-old, everyone sings, “Who are we rooting for?”

He shouts, “Max!” and beams a wide smile as they cheer.

The enthusiasm is in contrast to when he began coming to these sessions a few months ago. Back then, Max’s mother, Kelly Whalen, said she had to sit with him until he worked up the nerve to join the rest of the bunch.

Part of Max’s problem socializing, Whalen said, was difficulty speaking, and the twice weekly song time is part of an ASU program involving grad students who give youngsters one-on-one attention to help them work through speech problems.

The PCC at ASU provides speech therapy for toddlers and preschoolers through the university’s Department of Speech and Hearing Science. Most recently, it was joined by the After School Articulation and Phonology Program, which in the fall began offering similar services for kids from kindergarten through fifth grade.

"The PCC is a great resource for young children with speech sound disorders, but we wanted to reach families with older children as well, so we developed” the program, which goes by ASAP, said Kelly Ingram, whose ASU Speech and Language Clinic administers both ASAP and PCC.

Ingram explained that while in-school speech therapy is a good start, there can be downsides: Children are often pulled out of regular classes and end up missing lessons; The caseloads of in-school speech therapists are often very large, which means kids aren’t getting a lot of individual attention; And the criteria for a child to qualify for speech therapy is based on age, meaning in some cases, children aren’t receiving therapy until the problem has worsened.

“Even if they’re only here for an hour and 15 minutes every week, they’re still getting a lot of practice,” ASAP clinical faculty supervisor Cathy Bacon said. “Probably more than they’re getting all week long in the schools. ASAP provides intense, individualized instruction at a low cost.” 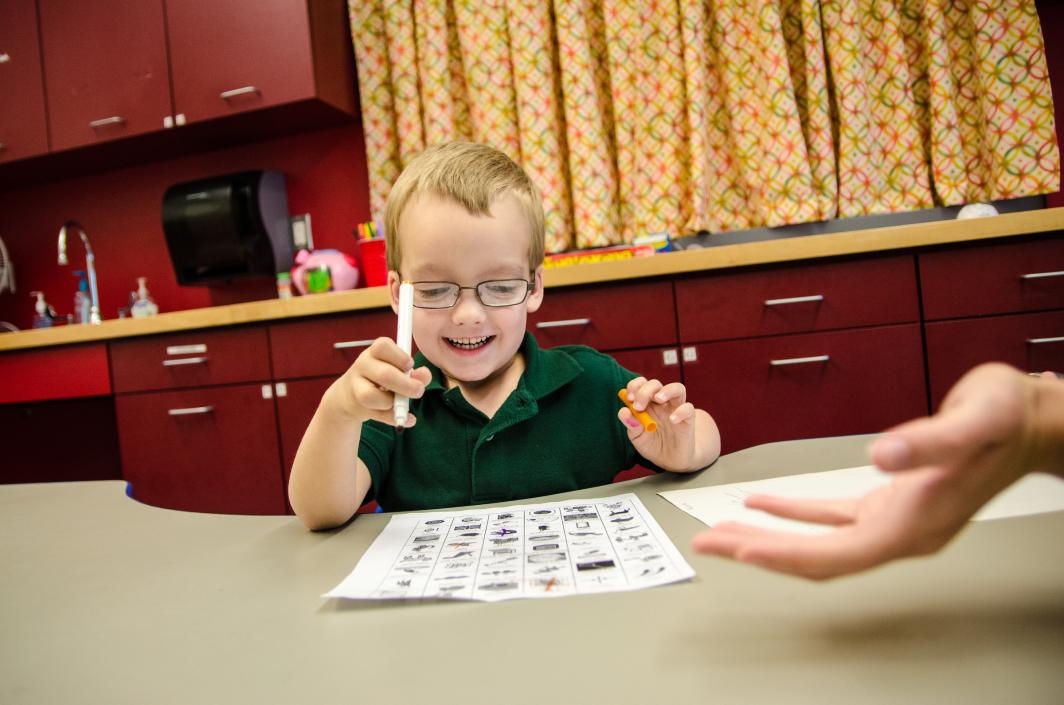 Cru Larson, a 5-year-old in ASU's Afterschool Articulation and Phonology Program, works on his pronounciation. 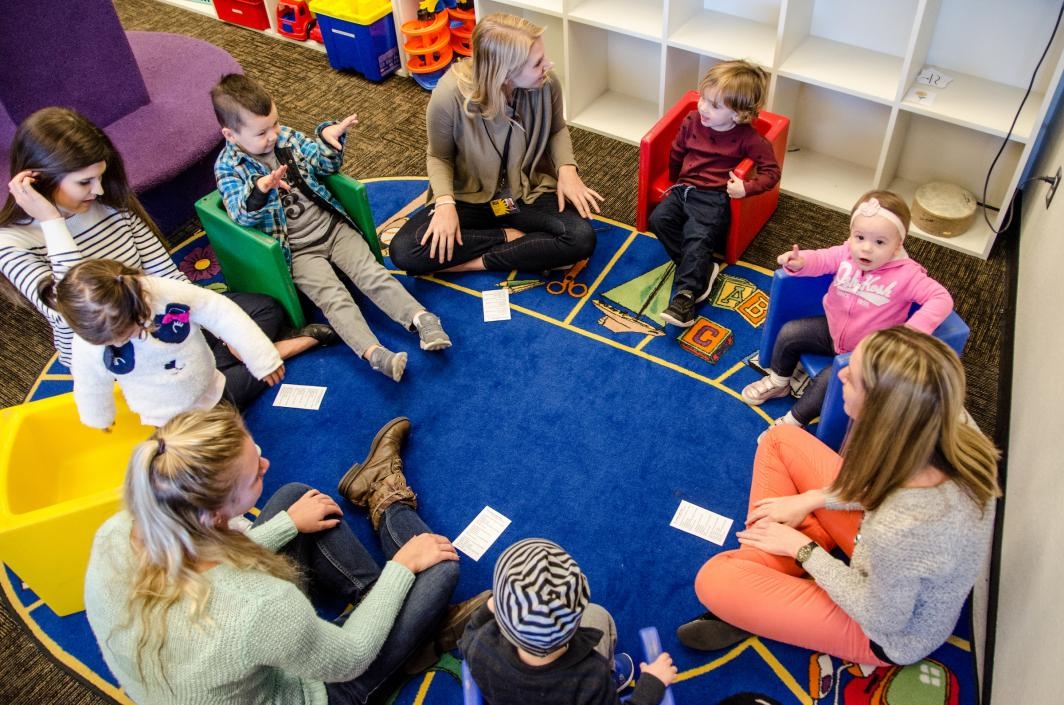 The child participants attend once or twice weekly sessions, depending on need, on a semester-by-semester basis. The sessions range from an hour and 15 minutes to two hours, during which time the children are guided by the ASU graduate and undergraduate students through a series of activities and one-on-one drills.

The type and intensity of the activities vary based on the age group but can include singing, musical instruments, art projects, sensory play, story time, snack and outdoor play. All of the lessons are planned by the ASU students, who also set up individualized road maps for each child that detail specific areas that need work, identify goals and provide weekly progress reports for parents.

“There’s no other way to get this kind of hands-on experience,” said Sarah Shill, a speech and hearing science undergrad with ASAP. She and fellow speech-language pathology students Jessi Johnson, Dominique Vasquez and Andrea Valentin make up the program’s first cohort.

She and Bacon observe each session in an adjacent room where they can see and hear everything that goes on, taking note of what needs work and what’s working well, so they can give the ASU students notes and guidance afterward.

“We have amazing feedback from the professors basically every day,” Valentin said.

The programs are growing. The Department of Speech and Hearing Science is next looking at making their existing summer reading program available during the regular school year.

According to Bacon, these type of outreach programs are “just another way ASU is reaching out to provide services to the community while providing quality training opportunities for students.”

Organizers say the individual attention is key. The ratio of ASU students to children in both PCC and ASAP is presently about 2 to 1. It varies depending on the number of participants, but is never more than one ASU student to every two children.

“You can’t beat that,” Whalen said, adding that her son Max’s progress has been “huge.”

“I wish I had known about this sooner,” she said. “It has just been the absolute perfect situation for him.”

Editor’s note: This is part of a series of profiles for fall 2016 commencement. See more graduates here.“Transdisciplinary” means applying one field of knowledge to another. It’s a hallmark of Arizona State University. Sometimes it’s on purpose: “What if we applied economic theory to avian social behavior?”Sometimes it’s by accident with a happy result, like the microwave and x-... 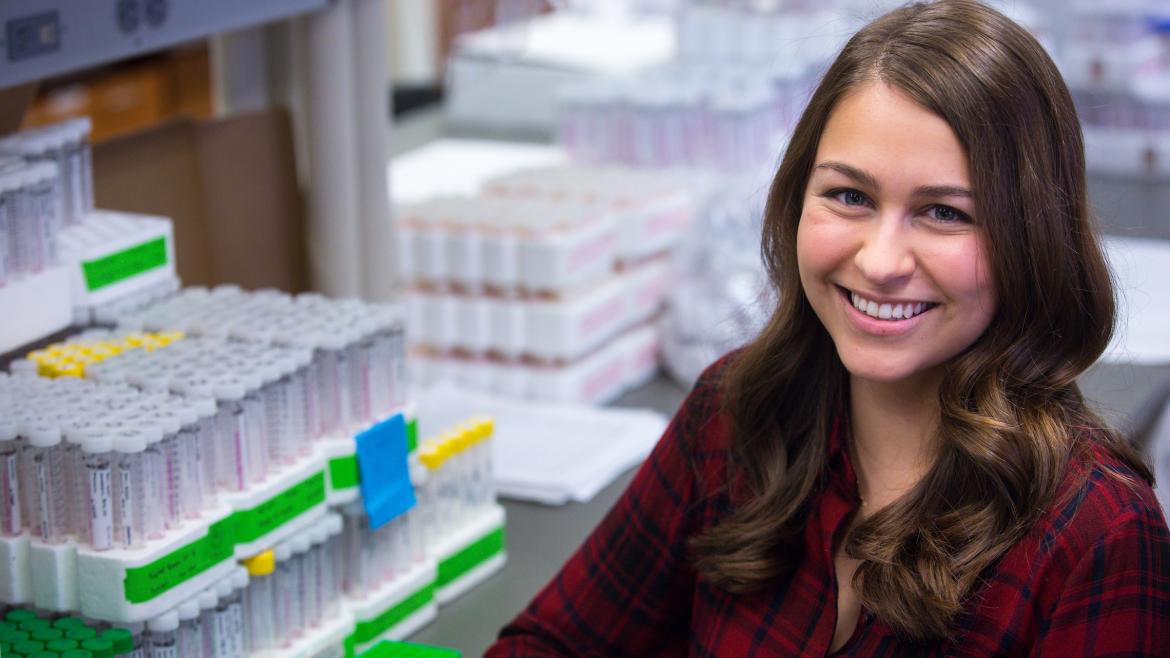 “Transdisciplinary” means applying one field of knowledge to another. It’s a hallmark of Arizona State University. Sometimes it’s on purpose: “What if we applied economic theory to avian social behavior?”

Sometimes it’s by accident with a happy result, like the microwave and x-rays.

That would describe the experience of graduating senior Kate Spencer, a Tempe resident graduating with a major in biochemistry from the School of Molecular Sciences and a minor in anthropology from the School of Human Evolution and Social Change. Her field was chosen through happenstance (see first question in Q&A below).

Kelly Knudson, associate director of the SHESC and director of the Archaeological Chemistry Laboratory, discussed Spencer’s work in the lab applying biogeochemistry to anthropological research questions.

“Kate Spencer exemplifies ASU’s commitment to transdisciplinary research,” Knudson said. “Through her senior honor’s thesis research in the Archaeological Chemistry Laboratory, she combined both archaeology and biogeochemistry to better understand how the environment, particularly altitude, affects different isotope systems. The ACL and SHESC have a long commitment to undergraduate research, and it is so fulfilling to be able to work with amazing undergraduates like Kate.”

Answer: When I chose it, I couldn’t decide between biology and chemistry, so I just picked biochemistry. I realized it was its own subject, but then I just kind of stuck with it.

A: I took a medical anthropology class in SHESC. It was online. We learned about how different societies and countries view medicine. We had to read a book about a family living in American who had come from Taiwan or something like that. Their daughter had seizures. Of course the American doctors know the science behind epilepsy, but (the parents) didn’t believe any of that. They thought it was her spirit leaving her body. It was really interesting to see how other people can think of things like that, especially with me wanting to be a doctor. That was definitely an eye-opener.

A: In-state tuition. Am I allowed to say that? I wanted to pick something cheap because I knew I wanted to go out of state to med school later.

A: Stay focused. That’s something I was good at it, but I definitely see other people struggling to stay focused on their studies. Why blow it now?

A: The Secret Garden.* My parents used to teach here, so I’d sometimes come with them and watch them teach, but we’d always go there on the way out. So, I’ve been going there since I was little.

A: I’m planning on going to med school. I don’t know (what kind of doctor I want to be). For now, I work in the emergency department at Chandler Regional and Mercy Gilbert as a scribe, so I’ll keep working. I follow doctors around and do all the charting information, so they can focus on the patient. Next summer I’ll start applying to med school. That’s like a year-long application process. That’s the plan.

A: Forty million dollars probably isn’t that much to deal with any problem. Maybe providing vaccinations to Third World countries. Often they have the drugs, but because Third World countries don’t have electricity, they can’t store them. These things have to be refrigerated, so a lot of times the vaccines go to waste because they expire in the heat before they can be used. That would be interesting to work on.

*If you don’t know where the Secret Garden is, you’re not a Devil yet. Ask around.

Top photo: Kate Spencer poses in an anthropological chemistry lab, on Nov. 30, where she completed her Barrett thesis. Photo by Charlie Leight/ASU Now