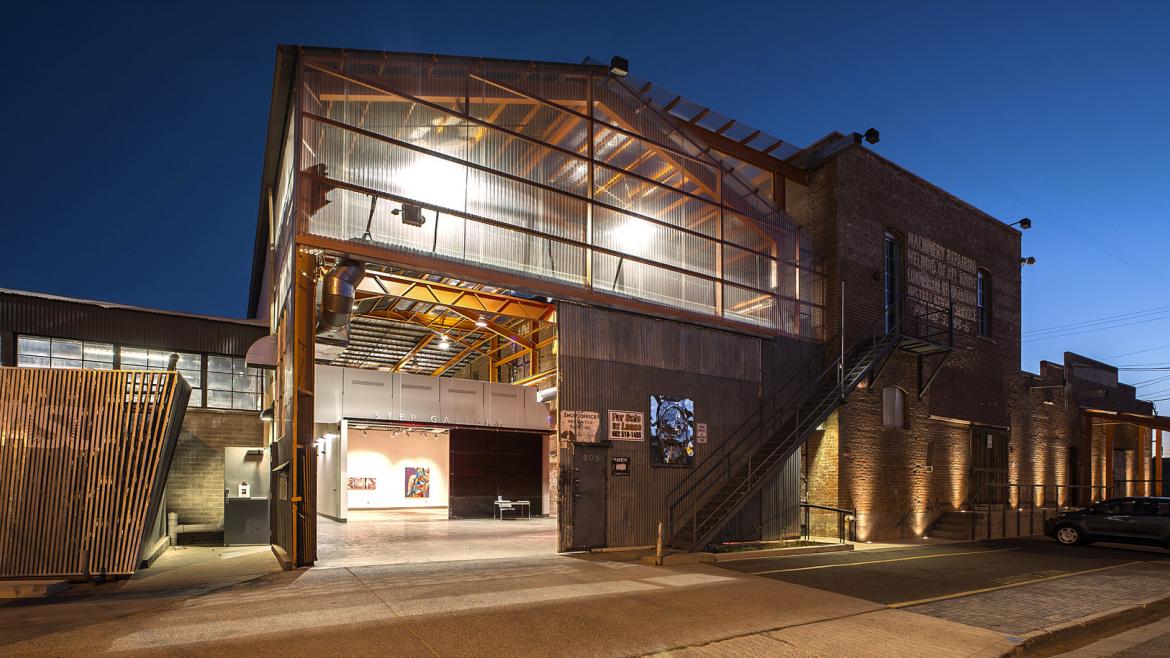 From 'bulldozer bait' to a beehive of artistic activity

In a different part of the same historic building, Alvin Huff works on a massive steel sculpture threaded with and entangled by rope. He says he’s inspired by existence in macro and micro scales, the ecological view of things vs. DNA and the way things are structured.

The two artists are graduate students in ASU’s School of Art, and although their work doesn’t look anything alike, both say they’re influenced by the place where they produce it: Grant Street Studios. Once destined to become rubble, the 100-year-old structure now serves as the state-of-the-art center of activity and production for graduate fine arts programs in ASU’s Herberger Institute of Design and the Arts. And the public is invited to see the space from 6-9 p.m. the first and third Fridays of each month, including during this week's First Friday's art walk.

Kayser calls it “a beehive of sorts. The creative energy around here is buzzing, and there’s an opportunity for dialogue with artists from other disciplines.”

Huff agrees, saying: “I like that we have all the different departments together. It’s good to be inspired by other people, and I like to see them grow. We kind of mentor each other.”

A sampling of artists at Grant Street Studios; see their fuller video stories later in this story. Videos by Deanna Dent/ASU Now

Originally constructed by Paul Litchfield's Southwest Cotton Company in 1917-18, the sprawling two-story building at 605 E. Grant St. later housed Karlson Machine Works. By 2004 — when artist and developer Michael Levine bought the warehouse — it was, in his words, “bulldozer bait.”

Three years of restoration led to the building receiving the grand prize in the 2007 Governor’s Heritage Preservation Honor Awards: “Levine achieved a standard of rehabilitation that is rarely met,” judges wrote, “due to his skill in blending the contemporary with the historic fabric.”

Recognizing an extraordinary and extraordinarily well-situated space, ASU School of Art Director Adriene Jenik arranged to move graduate programs in painting and drawing into the building in 2014, along with the Step Gallery, and a critique space.

Jenik says that Herberger Institute Dean Steven J. Tepper, who arrived at ASU a few months after the first programs moved to Grant Street, “got the vision that was being put forward, and he supported it 100 percent.”

In fact, the School of Art’s presence in downtown Phoenix dovetails with Tepper’s vision for a design and arts corps that will serve the city, an initiative designed both to invigorate Phoenix and to give students the real-world experience they need to realize their ideas in a practical setting.

Between 2014 and 2016, other School of Art graduate programs in fine arts also migrated from Tempe to Phoenix, including intermedia, sculpture, fibers and photography, together with the Northlight Gallery, which showcases photographic work.

In the spring of this year, ASU purchased the building from Levine, which made it possible for the ceramics program to move into the space as well. The printmaking program, meanwhile, is scheduled to make the move downtown in 2017.

At the ceramics program’s grand opening in the new space on Nov. 19, visitors toured the students’ new studio spaces; viewed “Exchange: A Group Ceramics Exhibition” at Step Gallery, featuring works by ceramics graduate students from ASU and San Diego State University; and admired the new Blaauw kiln, one of two that ASU received thanks to a grant from the Windgate Foundation. 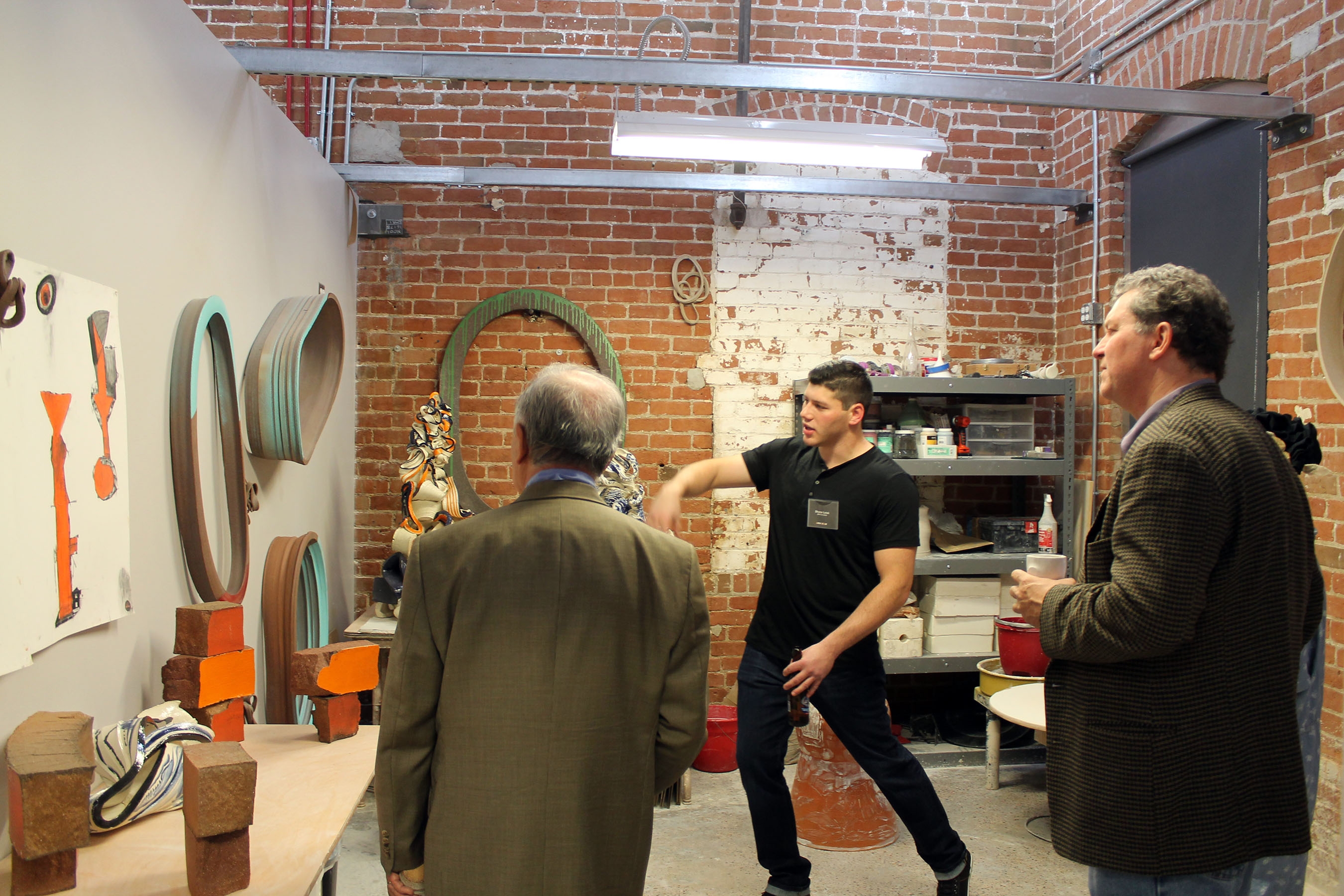 Ceramics graduate student Shane Lutzk discusses his work with ASU Art Museum Director Gordon Knox and other guests at the ceramics program's Grant Street Studios grand opening on Nov. 19. Ceramics is the latest School of Art graduate program to move into the space. Painting and drawing first moved there in 2014, followed by others including intermedia, sculpture, fibers and photography. 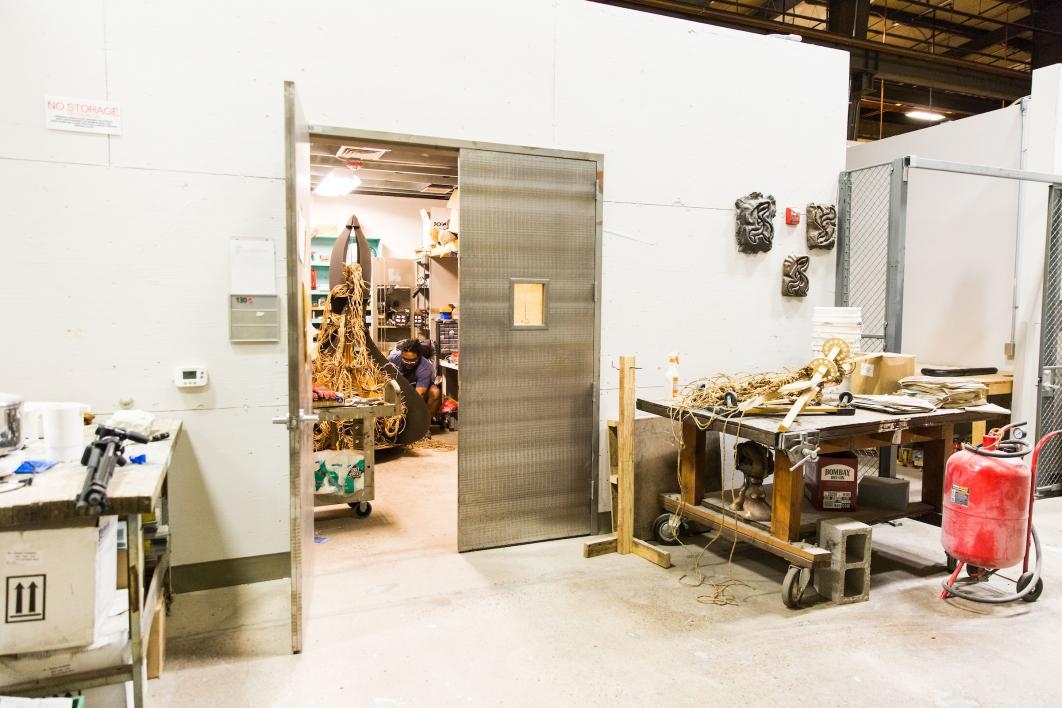 Grant Street Studios in downtown Phoenix comprises a number of studios where ASU School of Art graduate students — such as sculptor Alvin Huff — can work on their own creations and allow their ideas to percolate with other artists. 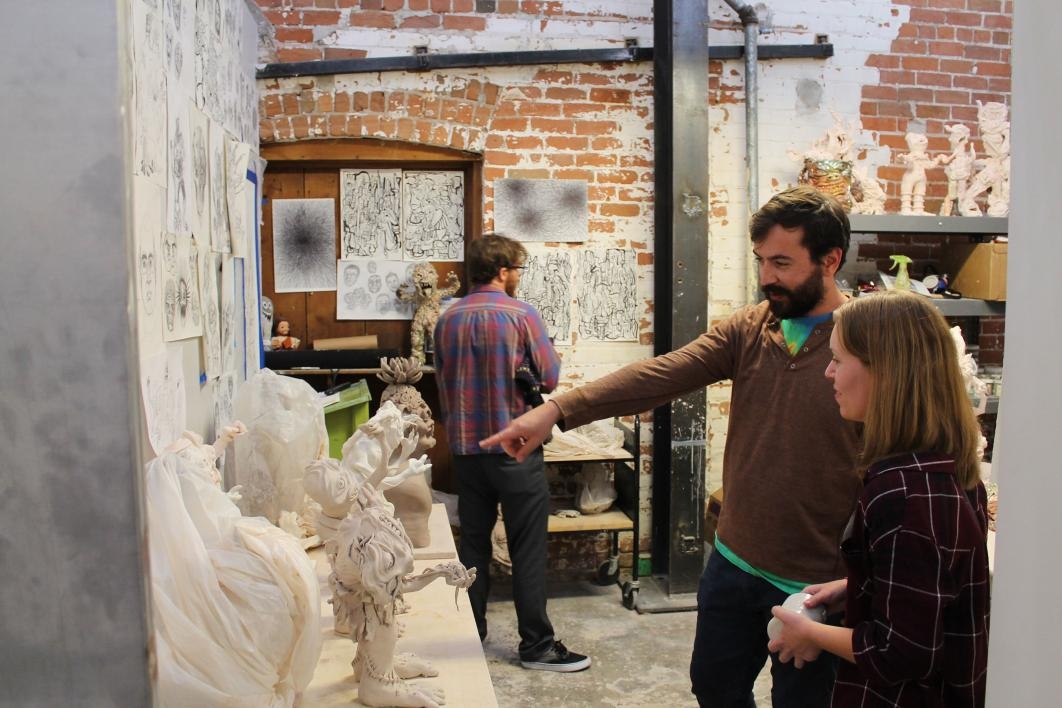 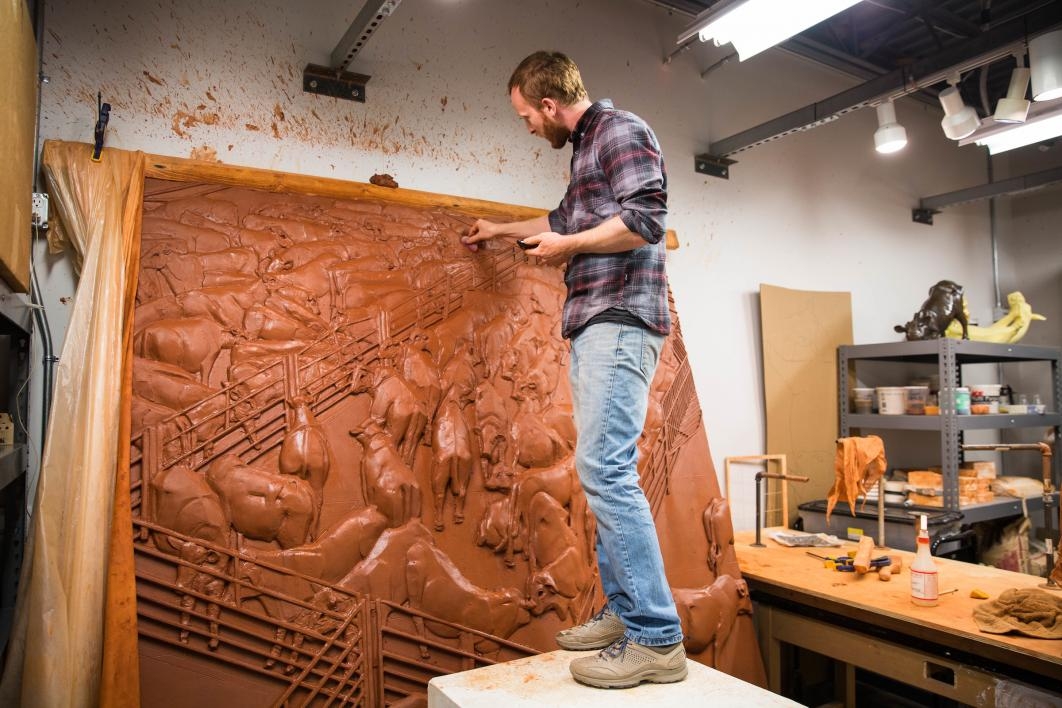 ASU artist Elliott Kayser works on a large-scale ceramic carving of a cattle farm in his studio at the Grant Street Studios the afternoon of Nov. 17. 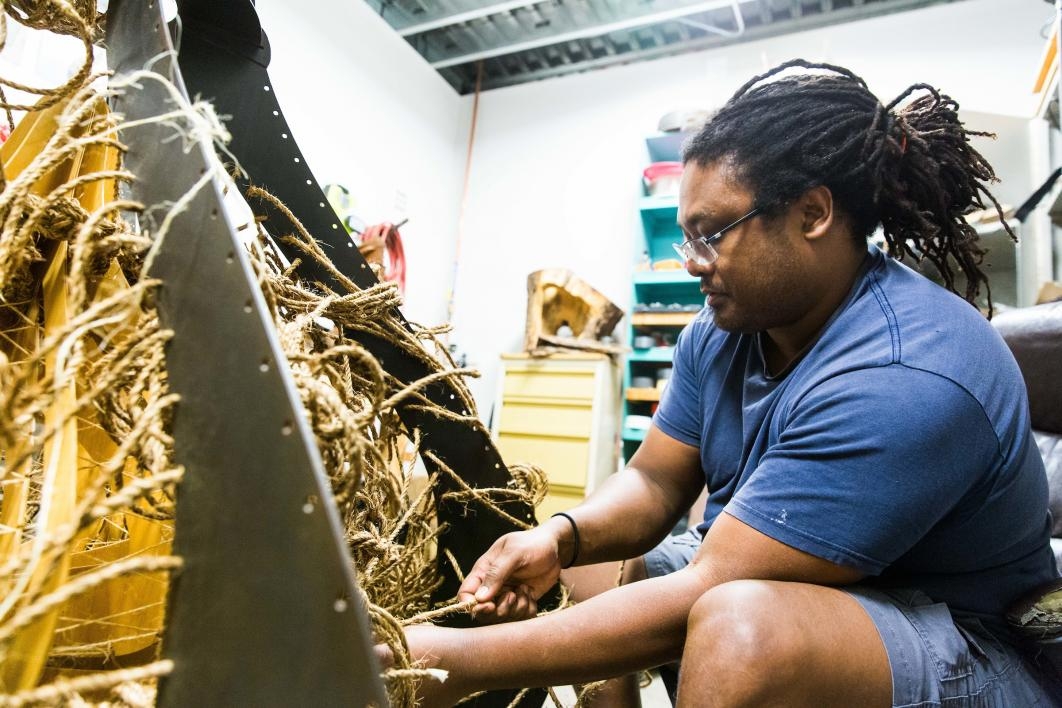 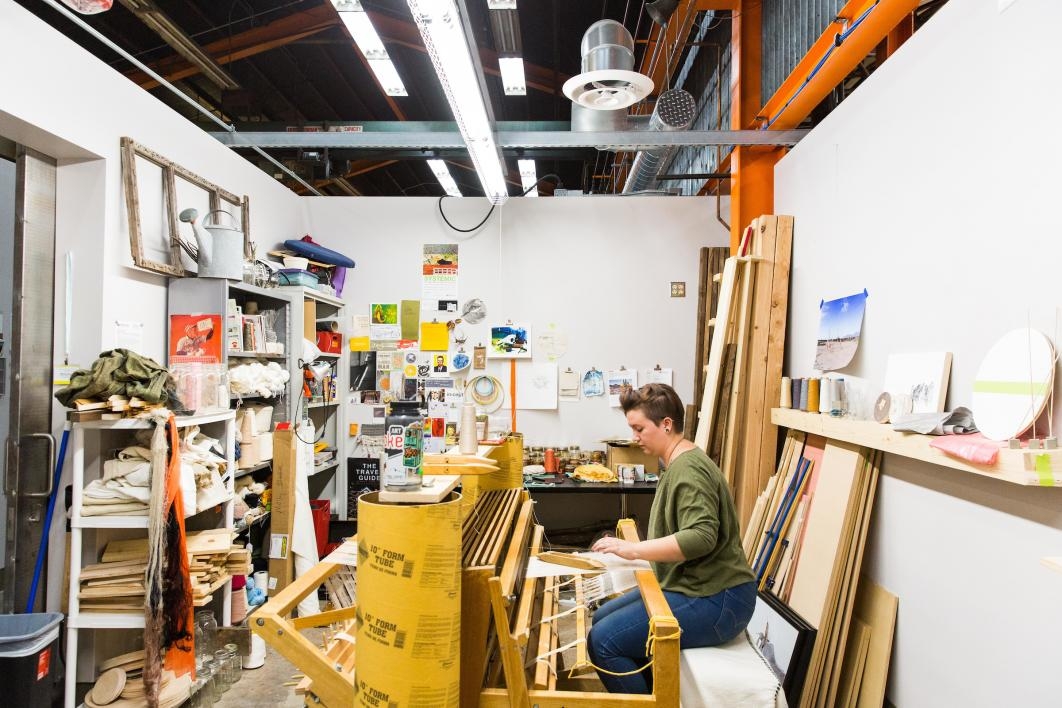 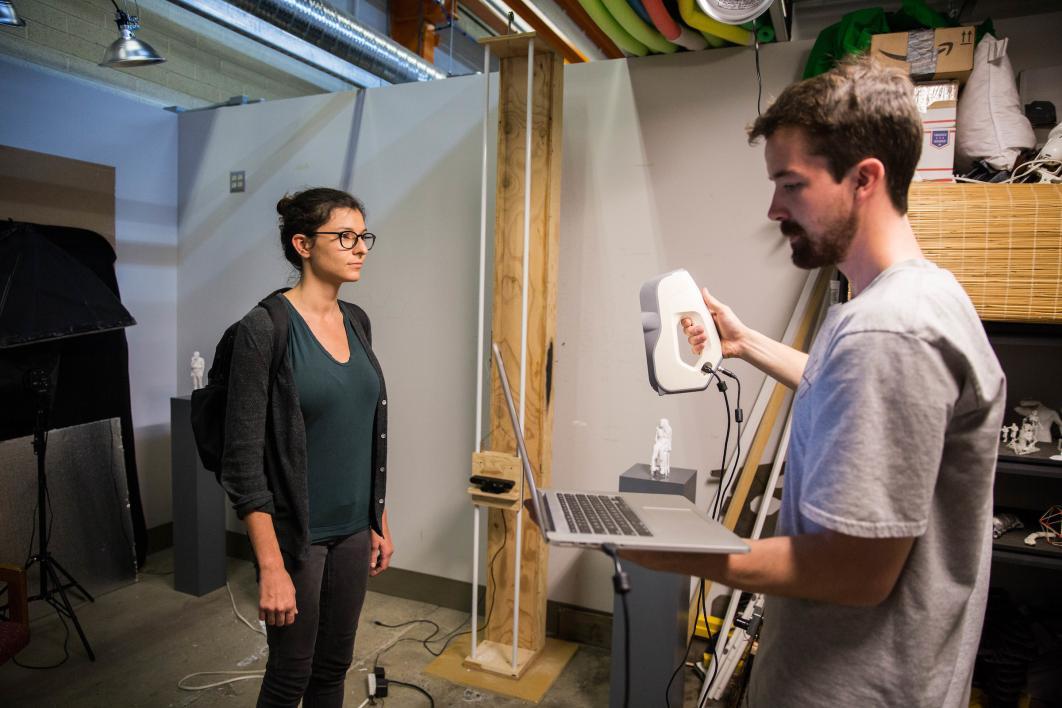 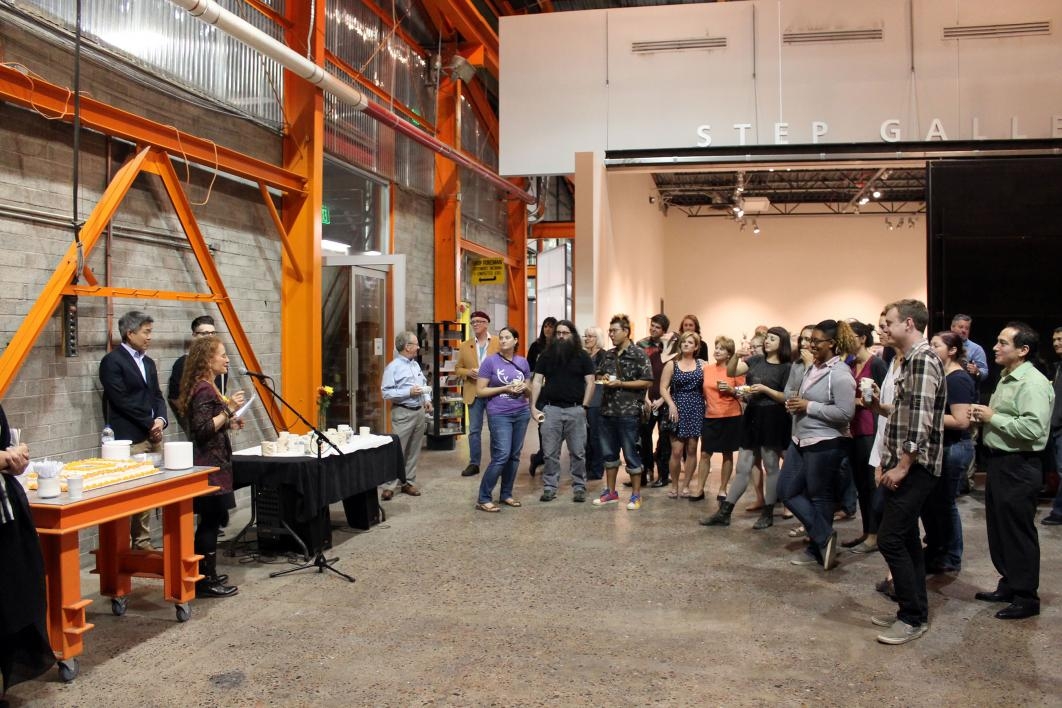 Susan Beiner, recently named Joan R. Lincoln Endowed Professor in Ceramics, speaks at the official opening of the graduate ceramics program at Grant Street Studios on Nov. 19. Behind her is ceramics professor Sam Chung, who was also instrumental in making the program’s new facilities a reality.

According to Susan Beiner, recently named Joan R. Lincoln Endowed Professor in Ceramics, Blaauw kilns have been internationally recognized as some of the most sophisticated and efficient kilns in the ceramic field.

“These kilns are state-of-the-art and can be controlled either manually or via computer to provide exceptionally precise firing conditions,” Beiner explains. “With their higher efficiencies due to better insulating material, zone control and burner technology, we are able to consume significantly less natural gas, thus reducing energy use and expense. The kilns are also designed with a safer burner system and produce much less heat loss to the kiln exterior, resulting in a safer environment for our students.”

Another resource Beiner points to proudly is the glaze room, which she says “helps stimulate problem solving and creative thinking of glaze chemistry.”

“There’s no other institution in the country with a diverse array of resources quite like ours,” said Garth Johnson, curator of ceramics for the ASU Art Museum, noting that the ASU ceramics program was already one of the top ceramics programs in the nation before the move. In addition, the photography program is ranked ninth in the country and the printmaking program fifth. U.S. News and World Report ranks the ASU School of Art 20th nationally among fine arts schools.

One important aspect of the ceramics move is the access to various kinds of equipment in the same building, Beiner says, which allows students alternatives for mixed-media works. A new 3-D printer lab opened to students this semester.

Touring the new facilities, Greg Lehmann, who heads the ASU Art Museum board, called ASU “a trailblazer in the development of creative spaces in the Valley. The fact that ASU stepped up to anchor itself in the arts district shows real vision.”

Ceramicist Kayser, meanwhile, says the space has allowed him to make his work bigger — he nods to the large terracotta ceramic frieze of cows, in progress, that takes up a good part of one of the studio’s walls. More than that, Kayser says, is the effect of having the whole community of graduate students from other programs such as sculpture, photography and painting in one physical place.

“It allows for impromptu conversations,” Kayser says. “Those ideas percolate, and they end up having a big impact.”

Jenik says that students being able to get together across practices is one of the most important aspects of the new space. The other, she says, is “the interchange with the public. You can see how it raises the bar for the students. And the public gets to see the students’ talent, which was somewhat hidden before. Now, we are in a space made for us, a space with an open door to the community.”

A closer look at artists in the studio

Four ASU students explain the inspiration behind their work.

Soprano Asleif Willmer, current Doctor of Musical Arts in performance student, emerged as the winner of the Metropolitan Opera National Council Auditions Arizona District Competition on Oct. 22 at the Musical Instrument Museum in Phoenix, Arizona. She began the competition singing "The Silver Aria" from Douglas Moores Ballad of Baby Doe, and the judges then asked her to sing" Da tempes...

Soprano Asleif Willmer, current Doctor of Musical Arts in performance student, emerged as the winner of the Metropolitan Opera National Council Auditions Arizona District Competition on Oct. 22 at the Musical Instrument Museum in Phoenix, Arizona. She began the competition singing "The Silver Aria" from Douglas Moores Ballad of Baby Doe, and the judges then asked her to sing" Da tempeste from Handels Giulio Cesare."

The auditions take place each year in 42 districts and 12 regions throughout the United States and Canada. As the winner of the district competition, Willmer went on to compete at the Western Region competition in Los Angeles on Nov. 6 at The Colburn School where she won an Encouragement Award. The Metropolitan Opera National Council Auditions is a program designed to discover promising young opera singers and assist in the development of their careers.