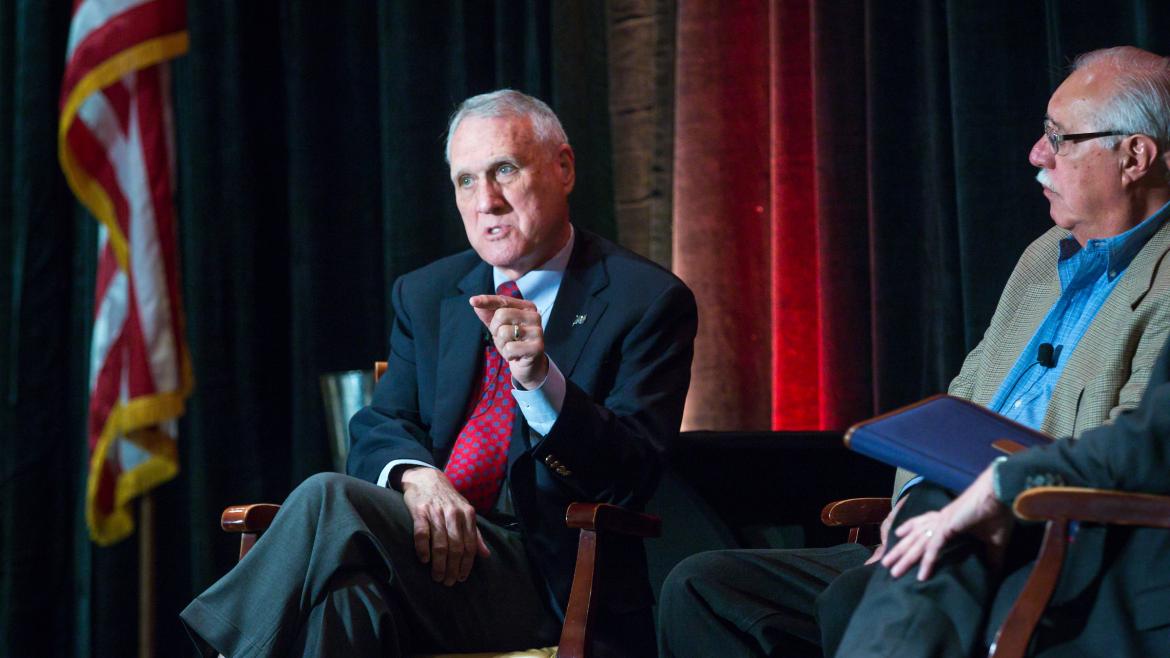 Independent voters, who resist being identified with either of the main political parties, could be a way for a deeply divided electorate to move forward, according to several experts at the annual “State Of Our State” conference on Wednesday in Phoenix.

“Independent voters can provide a bridge to close the partisan gap,” said Thom Reilly, director of the Morrison Institute for Public Policy at Arizona State University, which sponsored the conference.

Reilly said the institute has new research, not yet complete, showing that Republican respondents were more likely to discuss politics with friends who were independents than with Democrats. Independents make up about a third of registered voters in Arizona and were the largest single bloc of voters until registered Republicans recently overtook them.

“But for years independent voters have been ‘the other’ and treated as invisible by think tanks and in studies and polls,” Reilly said.

The conference featured a panel discussion that addressed the importance of voters who are not aligned with either major political party.

“It’s important to understand that independents, now 43 percent of the national electorate, represent a force of motion that is crying out for a new kind politics in this country,” she said.

Some panelists said that the two-party system disenfranchises people who don’t want to choose either Democrat or Republican.

Chuck Couglin, president of AZ High Ground campaign-consulting firm based in Phoenix, said that partisan primaries are a Soviet-style system.

“Why can’t I have a ballot with everyone on it? Let me as a candidate access that ballot. It’s disenfranchising for any independent to run,” he said, criticizing the fact that taxpayers pay for elections, which support the entrenched two-party system.

Daniel Ortega, a civil rights leader and attorney, said that Latino voters are especially left out.

“Per capita, our voting percentage is down even though we have more registered voters because they can’t vote in the primary.”

And the two-party primary system has led to deep ideological divisions that hinder collaboration according to Paul Johnson, former mayor of Phoenix and an activist for non-partisan elections.

“In this election, many Americans felt like they were choosing between the lesser of two evils and they weren’t voting for someone but against someone and that’s part of the partisan primary voting system,” he said.

“You’re talking about 5 or 6 percent of people who are making the decisions in the primary and they are demanding candidates be ideologically pure. So the candidates are divisive and split the country up.

“So it’s going to be more difficult for elected people to cross the aisle and work with both sides. It will be a winner-take-all system.”

Not everyone believes that independent voters are left out. Robert Graham, chairman of the Arizona Republican Party, said that engaged independents should be able to find out how to get information and cast ballots. “It shouldn’t be handed to them.”

Doug Chapin, director of the University of Minnesota’s Program for Excellence in Election Administration, said that the population changes affiliations back and forth over time.

“But there is a strengthening number of committed independents who really do follow politics, do have a worldview and the one thing they agree on is that they’re not Democrats and they’re not Republican.” 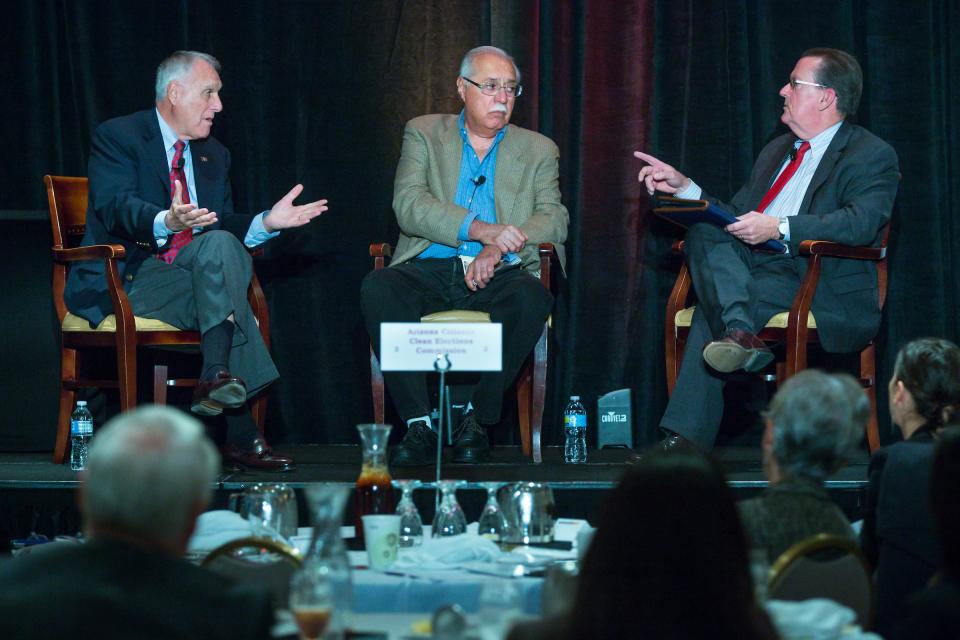 (From left) Former Sen. Jon Kyl, former Congressman Ed Pastor and moderator Grady Gammage Jr. discuss the future of politics after the presidential election at the "State Of Our State" conference Wednesday in Phoenix. Photo by Charlie Leight/ASU Now

Two longtime politicians from Arizona said they see little chance of bipartisan collaboration immediately ahead after the brutal election.

Former Sen. Jon KylKyl is a Distinguished Fellow in Public Service in ASU’s College of Public Programs and a Distinguished Scholar in the Sandra Day O’Connor College of Law. He is the namesake of the Kyl Center for Water Policy at the Morrison Institute for Public Policy., a Republican who served in the U.S. House of Representatives from 1987 to 1995 and then the Senate until 2013, said that pressure from the highly fractured parties will make compromise difficult.

“We’ve allowed politicians to get to the point where a candidate can take the populist, demagogue position to get elected and then they find themselves in a governing situation that’s very difficult,” he said.

Former U.S. Rep. Ed PastorPastor earned a bachelor’s and law degrees from ASU. He is the namesake of the Pastor Center for Politics and Public Service, within ASU’s College of Public Service and Community Solutions., a Democrat, said that politicians must develop personal relationships with each other. Pastor was elected to Congress in 1991 and served as the first Mexican-American congressman to represent Arizona, retiring in 2015.

“In 1994, when the Republicans won, I wondered what would happen, but I had developed relationships and we were able to bridge some of the problems,” he said.

Grady Gammage Jr., a senior research fellow in the Morrison Institute, moderated the discussion between Kyl and Pastor and said that talking with people from the other political side is what will preserve democracy.

“I think society is advanced through intelligent argument.”

Jonathan Koppell, dean of ASU’s College of Public Service and Community Solutions, praised the Morrison Institute’s mission of providing a space for conversations from differing points of view.

“There have been times that people have said that politics doesn’t matter and that it’s entertainment,” he said.

“It’s our job to underscore how much it does matter.”

The Earth's terrain through the eyes of Native people

When people look at a landmark like a peak, they may see a few things. A mountain, first of all. Maybe some history to go with it, like a Civil War battle once being fought at its foot. Perhaps a personal aspect, like usually stopping there for a cone.Native people see another dimension entirely. They see all those things, and more: religion, myth and beliefs, physically manifested in stone and sa...

ASU owl burrows get an upgrade 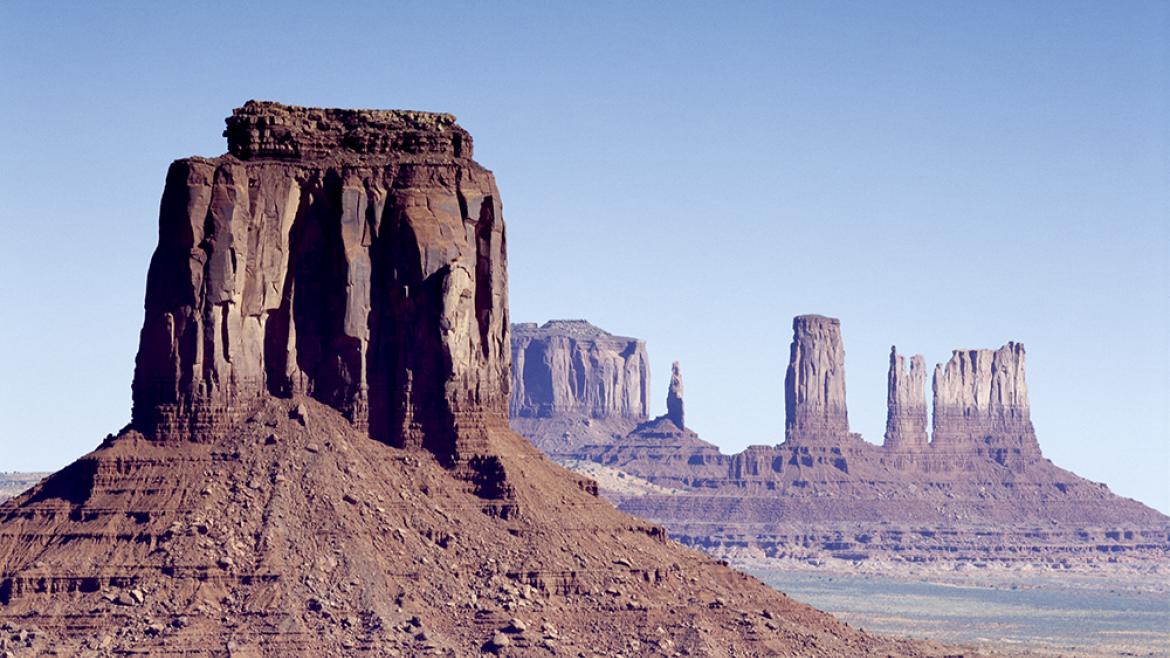 The Earth's terrain through the eyes of Native people

Tempe campus
ASU professor to speak about "Place, Culture, and Geoscience."
Ethnogeology seeks to include indigenous beliefs in research.
November 16, 2016

When people look at a landmark like a peak, they may see a few things. A mountain, first of all. Maybe some history to go with it, like a Civil War battle once being fought at its foot. Perhaps a personal aspect, like usually stopping there for a cone.

Native people see another dimension entirely. They see all those things, and more: religion, myth and beliefs, physically manifested in stone and sand.

Studying how different cultures understand their physical homelands is a new specialty called ethnogeology, which combines geology, geography and anthropology.

Arizona State University’s Steve Semken, an associate professor of geoscience education and geological sciences in the School of Earth and Space Exploration, will lecture about ethnogeology Thursday night in a talk called “Place, Culture, and Geoscience.”

Semken is the country’s leading expert on the topic. He became intrigued with the subject when he taught geology for 15 years at the Navajo tribal Dine College's branch in Shiprock, New Mexico. When he took students on geologic field trips, he noticed they had different names for places than what was on maps.

He began participatory research with the help of Navajo partners. He now studies human interactions with and knowledge of the Earth.

Asked if he could give specific examples of landmarks that feature prominently in Navajo mythos, he declined.

Navajo believe when the snow has fallen, the landmarks are asleep and they can’t be offended.

Examples that can be illustrated include the Oracle of Delphi in Greece. Eyewitnesses described priestesses inhaling vapors from a fault in the floor of their chamber. In the 1990s and early 2000s, researchers discovered the original fault in the chamber floor, and evidence that ethylene gas — a hallucinogenic hydrocarbon — was present in nearby springs.

In the Pacific, radiocarbon dating of scorched vegetation beneath lava sheets corresponds to historical dates of battles between the fire god Pele and other deities.

James Riding In is the interim director of American Indian Studies at ASU.

“In American Indian studies we have long reflected the views of Indian people that place is central to identity,” Riding In said. “I think what that shows is that in some instances Indian beliefs are impacting the way the research is being done.”

Semken said his field shows indigenous people that geology is part of them.

“I’m trying to help the students understand they’ve always had a place in this science,” said Semken, who holds a certificate in the Dine Philosophy of Education from Dine College. “Their culture has important knowledge, and they can bring that to the table and it will motivate them to study and learn.”

Admission: Free, but registration is kindly requested for planning purposes.

Details: More information, including parking, can be found at ASU Events.