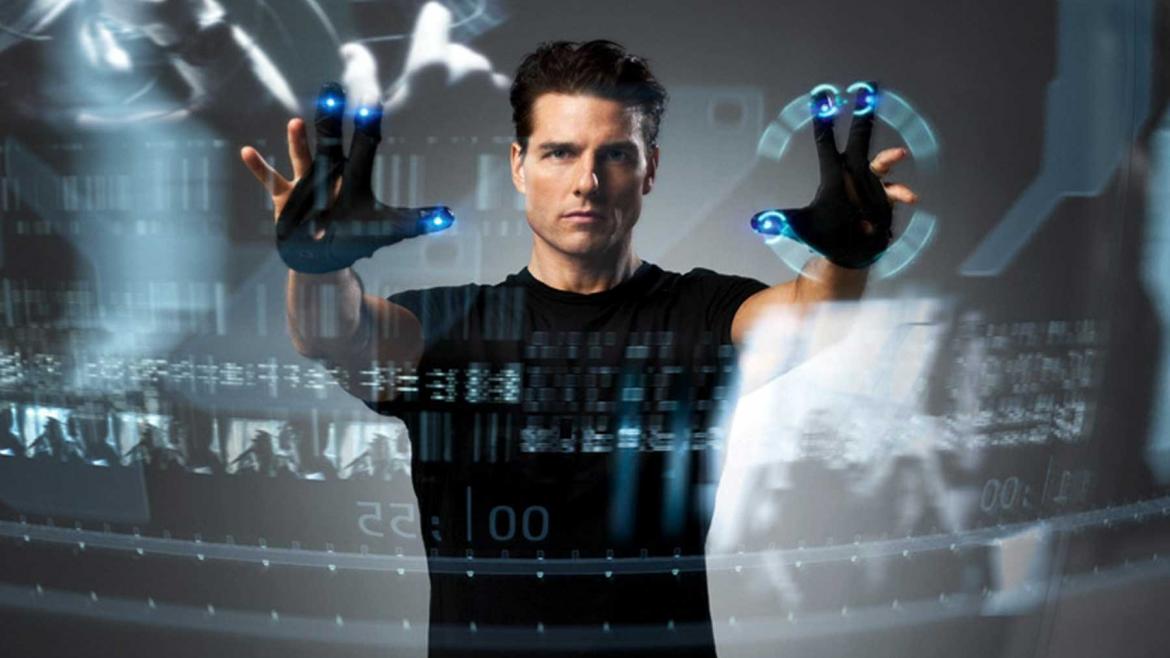 'Minority Report' futurists regroup at ASU for 2 days of events

Much technology from Spielberg sci-fi thriller is in use or under development, but what if education was new focus?

Ten years after the fall of the Berlin Wall, a group of futurists and visionaries gathered in a Santa Monica beachside hotel to conjure the future 50 years hence for director Steven Spielberg’s feature “Minority Report.”

Spielberg had no plot and no script, but he did have a short story by Philip K. Dick. He wanted a future based in reality, not “Jetsons” fancy or “Fury Road” ruin.

His specialists — who included a researcher from MIT, a cultural anthropologist, a computer scientist and a program director from DARPA, the military’s future tech developers — imagined a future where advertising followed you everywhere, robot insect drones explored hazardous areas and people were convicted of crimes they would commit in the future.

Look at now. Shop online for cuckoo clocks, and you will find yourself haunted by cuckoo clock ads for weeks. An Arizona State University scientist has created mind control for drones. Another ASU scientist works on algorithms that predict which criminals are most likely to strike next.

That same group — plus a few new folks — is going to give it another shot in a two-day event Thursday and Friday dubbed “Inventing the Future All Over Again.” The event is sponsored by Hollywood Invades Tempe, a 6-year-old student organization that brings film professionals to ASU to speak about their work through special screenings and open forum events.

“We created this world on the fly in two days, and that’s what we’re going to do at ASU,” said professor Joel GarreauGarreau is a professor of law, culture and values in the Sandra Day O’Connor College of Law; founding director, The Prevail Project: Wise Governance for Challenging Futures; founding co-director, Emerge: Artists + Scientists Redesign the Future; founding director, The Seven Horizons Project; affiliate faculty member, ASU School for the Future of Innovation in Society., who was at the original event in Santa Monica.

“People barely remember the plot,” he said. “What they remember is the world. … The reason they were so uncannily accurate was that they weren’t predictions. These were the guys who were inventing these futures.”

To invent a future requires a story, said Ruth WylieWylie is also an assistant research professor for Mary Lou Fulton Teachers College., assistant director of the Center for Science and the Imagination.

“In order to create the future, we need to have visions or stories about that future,” Wylie said. “That’s something futurists can do. We need to imagine something before we can build it.”

Imagining something in order to avoid it is equally important.

“If part of that visioning is about futures we don’t want, we can start thinking intentionally about avoiding that fate,” she said.

Making all this easier is the fact that telling stories and seeking patterns is part of the human condition. Sit down by a fire with a middle-age man who has had a few drinks and you’ll find that’s true.

“Human beings are pattern-seeking storytellers,” Garreau said. “Humans cannot just abide by the idea of randomness. We will look into the night sky and rather than deal with the fact that this a random distribution, we will make up stories about bears and dippers and warriors. Storytelling is at the heart of everything. It was at the heart of this election, it’s at the heart of what (President Michael) Crow is doing with the university. If you have a compelling story, it goes viral.”

In the scenario that will coalesce at Friday’s roundtable discussion (see schedule below), it’s the year 2066. Everyone has unlimited access to as much education as they want, for free, without restrictions of any kind. What will the world look like? How will people eat, socialize, shop and read?

People tend to date and marry people who are at the same educational level, Wylie pointed out. “What are the impacts of education as a differentiator when that goes away?” she said.

The profession of futurism is formally called scenario planning. It’s a means of rehearsing the future, much like training in a flight simulator. That’s what will happen at the event, Garreau explained.

“I don’t have a crystal ball, and I don’t know anyone who does,” he said. “Predictions are always wrong. I’m still waiting for my hotel room on Mars and my flying car. What I do cop to is being a scenario planner: a systematic rational logical way of thinking about the future that might be coming at us in a way we can act on.

“There’s no ooga-booga involved in scenario planning. It’s widely accepted by the Fortune 500, the American military; it’s a regular tool. It’s the opposite of predictions. Predictions try to figure out with some kind of certainty what’s going to happen. Scenario planning is just the opposite; it collects uncertainties. The virtue of that is when you try to do predictions, you end up with one or two options.”

Adam Collis, a professor in the Herberger Institute for Design and the Arts who teaches film directing, runs the industry relations program, ASU Film Spark, that brought seven campus organizationsIncluding the School for the Future of Innovation in Society and the Office of Knowledge Enterprise Development. together for this event. He said he is excited about the overlap between art and science in the project.

“This is a true cross-disciplinary activity,” Collis said. “I think the movie represents that nexus, and I think our effort here is trying to embody that nexus and the opportunities that come out of those two different disciplines colliding.”

We can look to science fiction for inspiration, Wylie said.

“Science fiction has the liberty to take science but then go one step farther,” she said. “It’s not bounded in what we know, but instead in possibility. It provides that motivation to keep exploring and think about the 'what if' part, which I think is fun.”

Garreau promised fun for the audience, who will be engaged directly with the panel during the event.

“It’s going to be like a really smart talk show,” he said. “We have a game that lets everyone in the audience help create this world.”

Hollywood Invades Tempe presents "Inventing the Future All Over Again," a special two-day event about imagining the world 50 years from now.

Henry Cisneros, the former U.S. secretary of Housing and Urban Development, said at an ASU lecture Tuesday night that the face of the nation has changed dramatically over the past century and that Americans are more racially and ethnically diverse than ever.Getting other Americans to buy in and realize immigrants are the key to the country’s future economic growth is one of Cisneros’ goals as ... 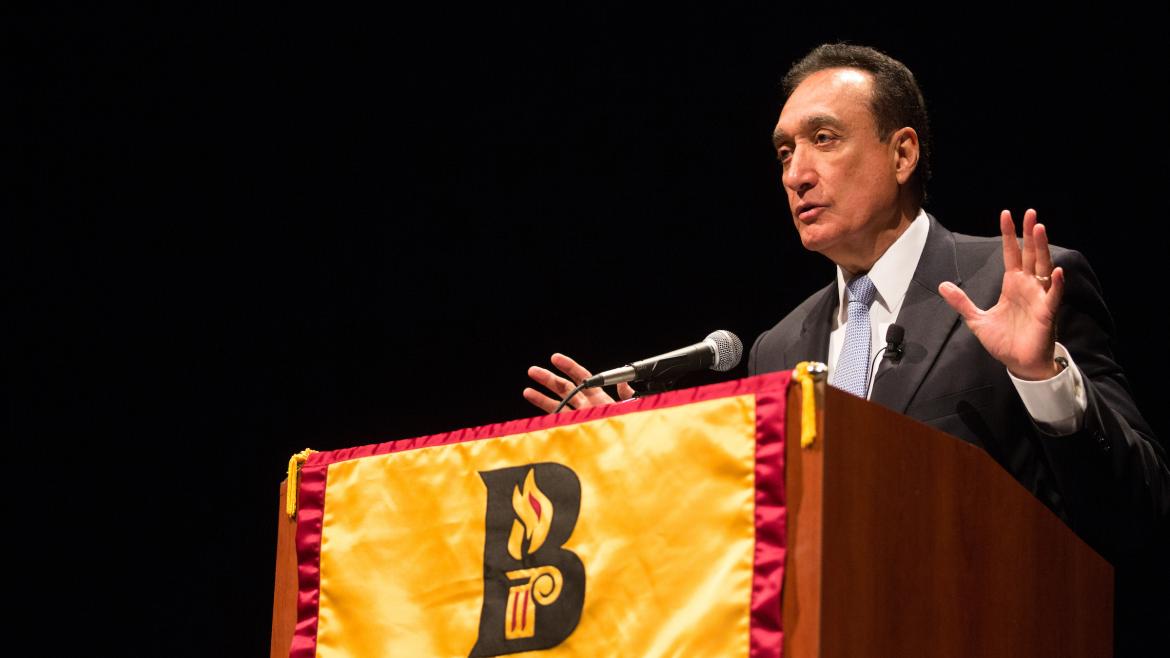 Henry Cisneros, the former U.S. secretary of Housing and Urban Development, said at an ASU lecture Tuesday night that the face of the nation has changed dramatically over the past century and that Americans are more racially and ethnically diverse than ever.

Getting other Americans to buy in and realize immigrants are the key to the country’s future economic growth is one of Cisneros’ goals as a new president-elect takes office next year, promising major reform.

“The immigrant’s story is an often beautiful and brutal story because they vote by their feet to get to this country,” Cisneros told a crowd of more than 300 on Tuesday night at Arizona State University’s Galvin Playhouse in Tempe.

“They strive, they struggle, they overcome obstacles and they built this country. The world recognizes the United States’ mix of creativity because of its racial and ethnic diversity.”

His talk — the 2016 Centennial Lecture sponsored by Barrett, the Honors College at ASU — examined the changing demographics of our nation, the impacts of the ongoing reform debate, and the contributions immigrants make to the economic, social and cultural fabric of the United States.

Cisneros is chairman of the City View companies, which work with urban homebuilders to create homes priced for average families. He was secretary of Housing and Urban Development under President Bill Clinton and was elected the first Hispanic mayor of San Antonio in 1981.

“Our country just endured one of the most contentious presidential elections in its history. Post-election emotions about many issues, among them immigration, are high, whether from the right or left. Immigration is a timely topic,” said Mark Jacobs, dean of Barrett, the Honors College at ASU, who introduced Cisneros.

According to the Pew Research Center, the American family is changing due to the fact that more than 59 million immigrants have arrived in the U.S. in the past 50 years. The center predicts America will become so diverse in the next few decades that by 2055, the country will not have a single racial or ethnic majority.

Cisneros said Latinos and Hispanics constitute about 55 million people in the U.S. today. That number will grow to 100 million by 2020, he said, about a fourth of the United States’ predicted population of 400 million. He said Hispanics are major contributors to the federal economy.

“It was Mexican labor that rebuilt the Gulf Coast after Hurricane Katrina,” Cisneros said. “They contribute in many ways economically.”

He said Hispanics work jobs most Americans would not otherwise take, pay into our tax and Social Security system, and are strong patriots. In the next few decades, they’ll be responsible for a 4.7 percent rise in America’s GDP and will help reduce deficits by a trillion dollars, he said.

But in order for them to become successful, immigration reform must be bipartisan, well thought-out and fair. Though he never mentioned President-elect Donald Trump by name, Cisneros said immigration requires of a new administration a level of sophistication and common sense.

“Right now we have 12 million undocumented immigrants in this country,” he said. “How do you deport 12 million people back to their country without it costing us millions? Do we even have those resources? I don’t think so.”

Cisneros said he does not believe in amnesty and supports border security, background checks, a work-permit program, and a clear and much shorter path to citizenship.

“These are the issues that the country needs to debate and come to terms with,” Cisneros said. “We should allow our immigrants to live like human beings again and teach them how to become citizens.”

Barrett freshman and civil engineering major Andrew Roberts said he is one of the 70 percent of Americans that Cisneros cited who are open to the process of legalization.

“I have an immigrant girlfriend who has an immigrant family,” Roberts said. “Immigrants have a chance to contribute and live in America, and we should allow them to have that opportunity.”