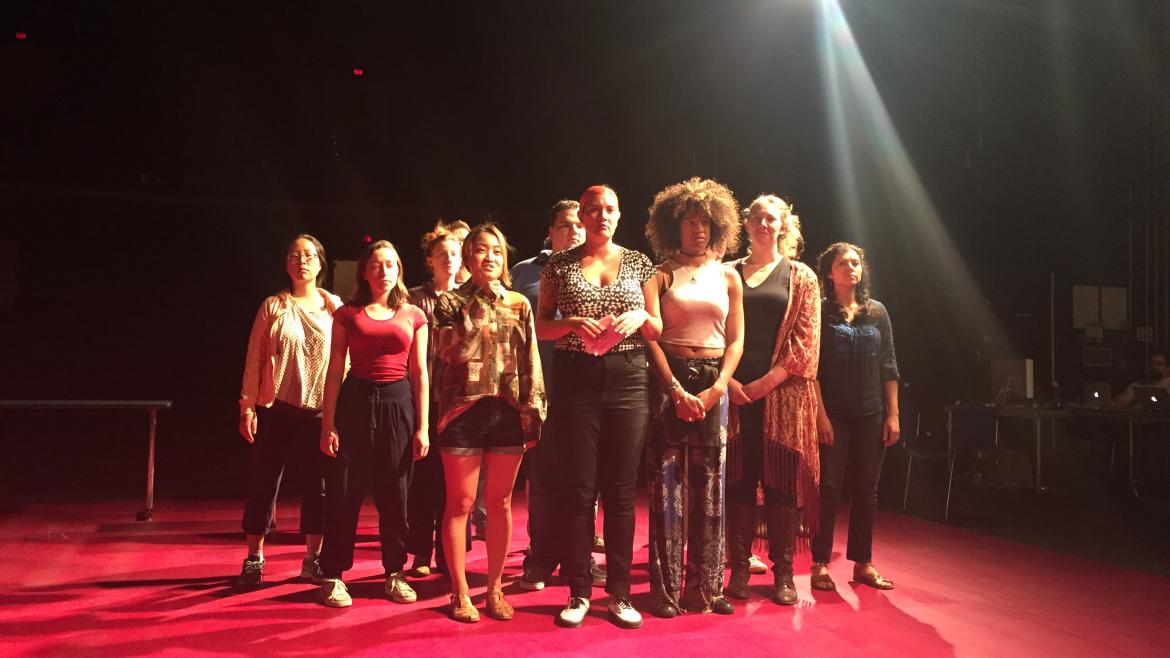 Designing democracy: How the arts and design can help us talk politics

Politics can be contentious under the best of circumstances. That’s why the rules of polite conversation recommend avoiding the subject.

But discussing politics is a critical component of our democracy, especially in an election year. So how do we do that without descending into acrimony?

According to Steven J. Tepper, dean of the Herberger Institute for Design and the Arts at Arizona State University, designers and artists can help us gain perspective and maintain civil dialogue, even when we disagree with one another.

“We need the arts to help us understand this political season,” Tepper said.

“Design and art open up the possibility for story, empathy and imagination in our politics, allowing us to bypass partisanship and get beyond polls and personalities to focus on the issues that we all face during the election and beyond.”

A case in point is “The Race,” an Election Day event that involves students, faculty, staff and community in an ongoing conversation that is part rehearsed performance, part impromptu action, part social gathering (pictured above).

By combining short skits, songs and performances with a more formal presentation in the evening — along with live election results — Michael RohdRohd is an Institute Professor in the Herberger Institute, co-founder of the Ensemble Lab at ASU and co-founder of Sojourn Theatre. is producing what he describes as “a community event with performance at the center of it.”

“My own work is about how art and theater helps make a uniquely dynamic space for civic encounter and civic thought,” Rohd said. “I feel like one of the reasons I was invited to join this community at this particular exciting time is my interest in the intersection of theater and community and civic life and an examination of how artists in a variety of ways impact public discourse.

“This project is one of my experiments over the last decade to make a space amidst the heat of political zeitgeist that allows us to be with strangers and work to consider, and even make sense of, our values and priorities.”

“This is not a show about the candidates or the election,” he clarified. “None of the performances are allowed to advocate Trump or Clinton. The show is about what America wants in a leader.”

Kyra Jackson, an MFA in performance student in the School of Film, Dance and Theatre and one of 24 graduate Herberger Institute students working with Rohd to make “The Race” happen, says that in a political season “like no other before it,” one of the group’s goals as a class is “to tackle the underlying questions of our discussions: What happens next? When whatever outcome is finally (decided), how will our nation move forward?”

Ultimately, Rohd aims to provide what he calls “a civic theater event, so people have a space on Election Day to come in and have a conversation instead of watching alone. We hope for an interesting and diverse crowd. We’re just trying to make sure the event is varied and playful, a place to spend what could be a very intense day.”

“The Race” begins at 3 p.m. Tuesday, Nov. 8, at Galvin Playhouse, on ASU’s Tempe campus, and runs till 10 p.m. In addition to the performances, Rohd said, Galvin will be “a public civic space to watch the results come in on CNN.”

What democracy is about

Starting in 1984, artists Antoni Muntadas and Marshall Reese began compiling a history of presidential campaign spots, following the evolution of political advertising from its beginnings in 1952 up to the present.

Every four years, the artists re-edit the entire project, titled “Political Advertisement,” and add examples of current ads. The video is arranged chronologically and provides a timeline of key ads over the decades. 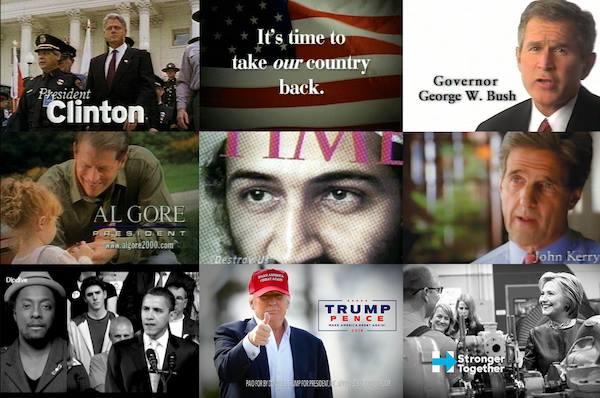 A collection of campaign ads in "Political Advertisement."

Muntadas sees “Political Advertisement” as part of an artistic tradition that dates back to the photo montages of the 1930s. Like earlier artists who worked with photography and video, Muntadas said, “We have access, we recycle, we reappropriate” the material.

For the past nine general elections, the artists have premiered the latest version of “Political Advertisement” in a public presentation. This year, the premiere took place Nov. 1 at the ASU Art Museum. In addition to famous ads such as the anti-Goldwater “daisy” spot of the 1960s and an ad featuring Jackie Kennedy addressing viewers in Spanish, the audience watched more recent examples of political advertising from President Barack Obama, Hillary Clinton and Donald Trump.

“What I find interesting in this piece, this film, is the fact that people are able to see a clear line, chronological timeline, of these expressions but without a voice-over explaining or contextualizing,” said Reese. “We’re really letting the viewer look at them and judge for themselves. It allows people to look at our history in a different way.”

Reese said he was optimistic about the enterprise when he and Muntadas started it in 1984, but his view has changed somewhat: “The marketplace doesn’t necessarily offer the best place to present political ideas. That’s what democracy is about. It’s not a supermarket.”

‘Speaking out is essential’

On view at the Scottsdale Museum of Contemporary Art during the election and beyond, the exhibit “Push Comes to Shove: Women and Power” aims to use art as a critical catalyst in rethinking and transforming the advancement of women.

This cross-disciplinary collaboration between Muriel Magenta, professor of intermedia in the ASU School of Art, and Sara Cochran, director and chief curator of SMoCA, features 19 women, primarily ASU faculty and alumni, in a wide-ranging show that addresses the role of women in society and politics through sculpture, photography, video, sound and installation.

"Walking on Glass," 2016, by Brooke Grucella. Acrylic latex house and spray paint on MDF, 8 by 20 feet, on view at the Scottsdale Museum of Contemporary Art. Grucella is an MFA graduate from ASU's School of Art who currently teaching and is a curator at the University of Arizona. It's part of the exhibit “Push Comes to Shove: Women and Power” at the Scottsdale Museum of Contemporary Art examining the role of women in society and politics.

Magenta says the purpose of the exhibit is “to bring public consciousness, in an artistic format, to the underrepresentation of women decision makers at the table in all fields.” She also points out that the show is exploring the subject of women and power at a critical historical juncture.

“The current climate is uniquely polarized from political, economic and cultural aspects,” Magenta said. “Views about women prevail in all of these categories. This is true both nationally and internationally.

“Speaking out is essential in many different formats, including art. Today it is critical that we as artists take a position on behalf of women.”

“A woman running for president during the ‘Push Comes to Shove: Women and Power’ exhibition offers an exciting dynamic,” she added.

ASU Law student Allyson Von Seggern said she felt like a rookie two years ago working a primary election.She had recently moved from small-town Nebraska to the Phoenix area for law school. Eager to earn extra credit, she signed on to help with an ASU Indian Legal Clinic voter initiative. But she had no idea what to expect: “It was one of the most painful days of my life,” she said.Today, thank... 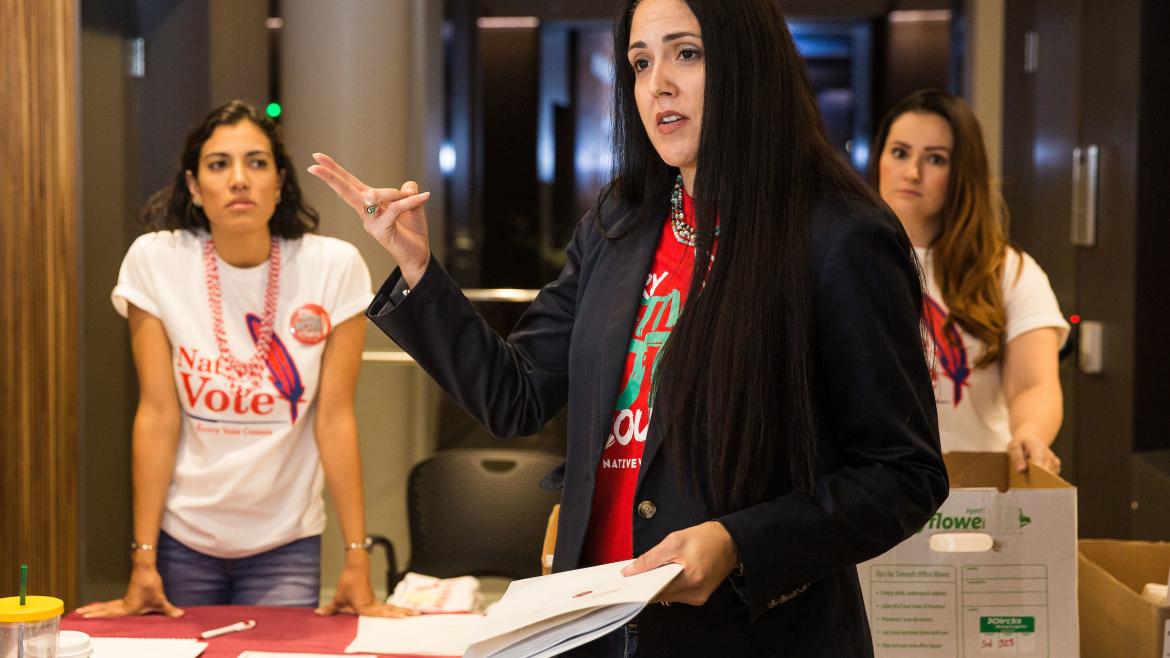 She had recently moved from small-town Nebraska to the Phoenix area for law school. Eager to earn extra credit, she signed on to help with an ASU Indian Legal Clinic voter initiative. But she had no idea what to expect: “It was one of the most painful days of my life,” she said.

Today, thanks in part to hundreds of hours of experience with the clinic, she’s ready to lead a group of about 80 volunteers for the clinic’s Native Vote Election Protection Project, an outreach effort that helps American Indians navigate problems on Election Day.

“We’re out to make every vote count,” Von Seggern said.

Composed of ASU students and dozens of community members, the initiative aims to ensure that Native Americans exercise their right to vote in federal and state elections. The volunteers have been trained to be ready to help with a range of issues, including voter intimidation. 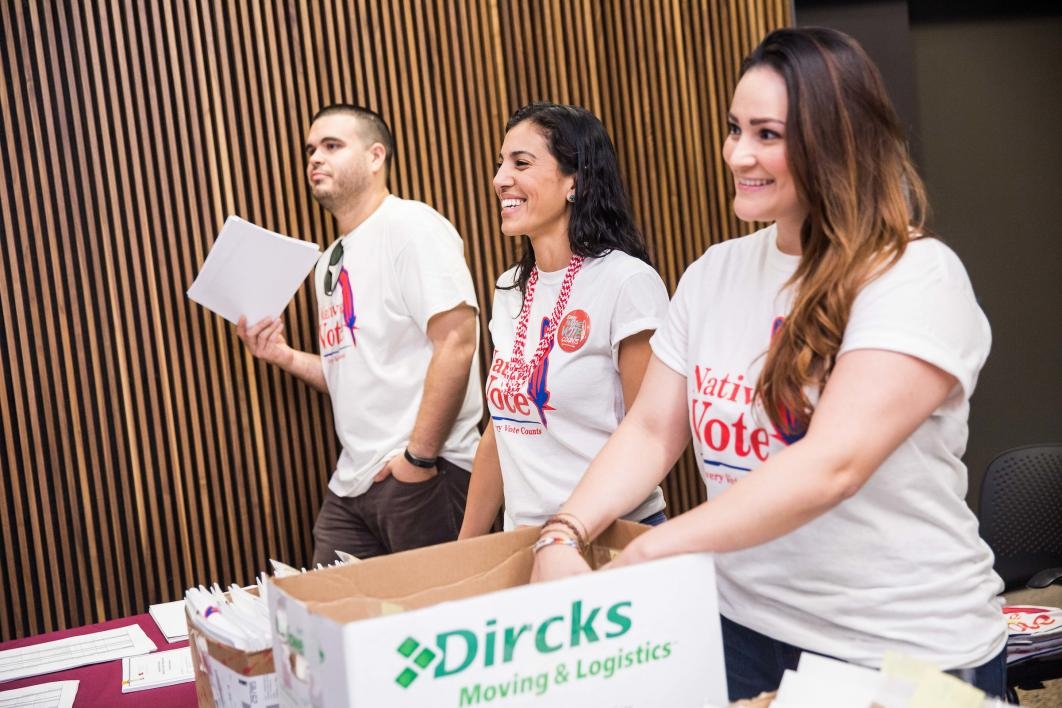 Talbot Gandara (left), Rosemary Avila and Allyson Von Seggern greet participants with welcome packets and T-shirts during an orientation for the Native Vote Initiative at ASU Law on Nov. 1. 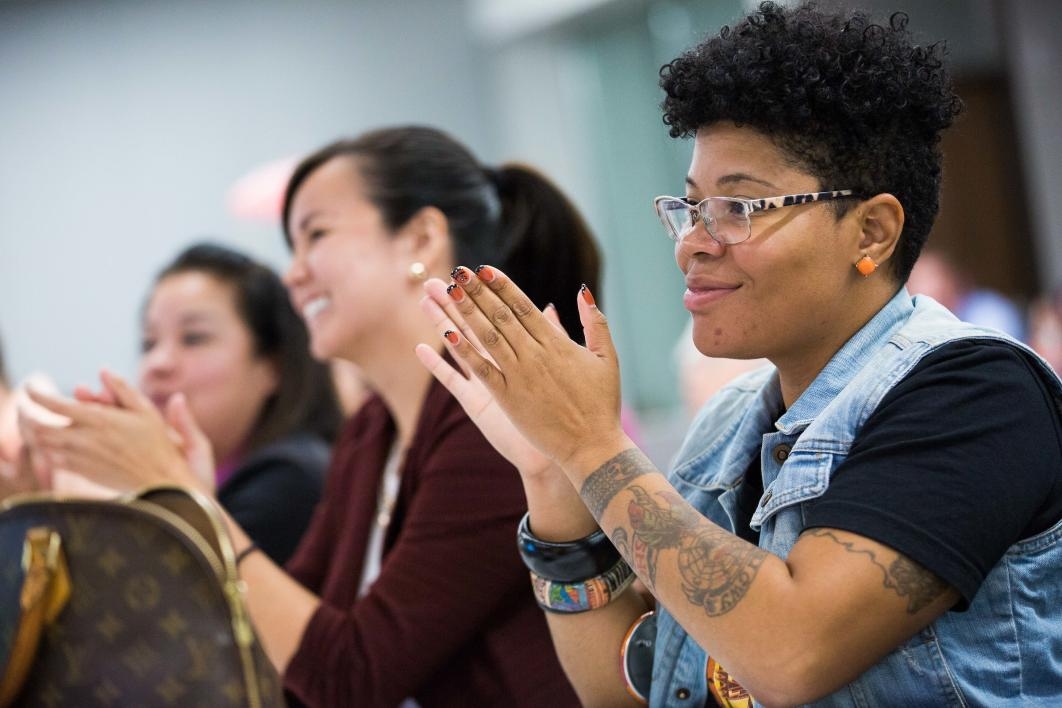 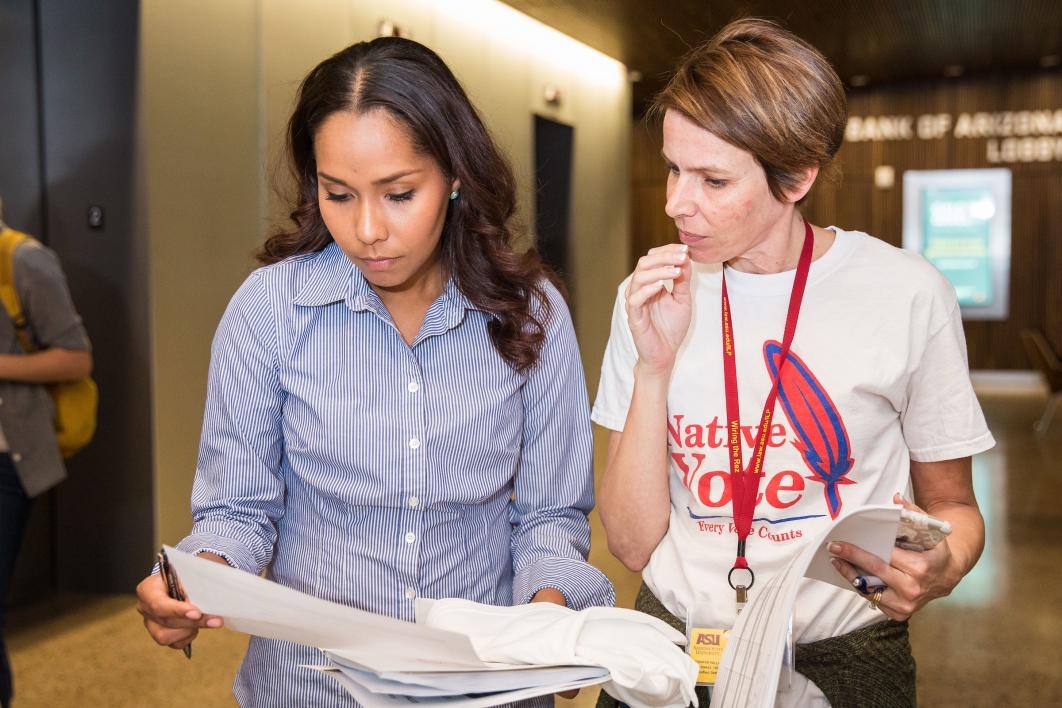 Ferguson-Bonhee said that particular law and subsequent others don’t take into account the negative effects on Native Americans and that they often lead to canceled votes, confusion and disenfranchisement.

“Native Americans like to exercise their right to vote,” Ferguson-Bonhee said. “In the old days it was obvious why these laws were passed. These days the reasons are different, but it’s still the same result.”

Ferguson-Bonhee said Arizona has a bad track record regarding elections. According to her project’s website, Native Americans weren’t allowed to vote until 1948, when the Arizona Supreme Court overturned a long-standing ban on Indian voting. Natives continued to be excluded until 1970 through so-called literacy tests.

Since then, she said, many Native people in Arizona have continued to experience voting difficulties.

“It doesn’t seem like in this day and age there are people out there trying to prevent Native American from voting, but there are,” said Kris Beecher, a first-year law student who is enrolled in ASU’s Indian Legal Program.

Beecher, who is Navajo, worked in the 2014 election. He said he saw many Native voters get disqualified due to newly instituted laws and a lack of knowledge from poll workers. He also noticed something else.

The initiative includes volunteers dispersing to 12 polling sites around the state and others working a telephone hotline.

Kyra Climbingbear, a first-year law student from Piscataway, New Jersey, said she volunteered because “where I’m from, not many people vote.”

“Arizona has a large indigenous population, and they seem more unified here,” Climbingbear said. “They seem to understand that Native lives matter … you’re only as loud as your voice.”

Ferguson-Bonhee said Natives will face many issues on Election Day, which could include providing acceptable forms of identification, problems with confusing ballot language, being placed on a permanent early-voting list (which she said some counties do), being sent to incorrect polling locations, and legal and procedural differences between tribal and state elections.

“Once you secure a right, it’s great, but there’s roadblocks all around,” Ferguson-Bonhee said. “Our job on Election Day is to clear the roadblocks.”

Top photo: Director of the Legal Indian Clinic Patty Ferguson-Bohnee touches base with her students during an orientation for the Native Vote Initiative at ASU's Sandra Day O'Connor College of Law on Nov. 1. The initiative was organized by the Indian Legal Clinic and led by third-year ASU Law students. Photo by Deanna Dent/ASU Now