On Nov. 4, the ASU Symphony Orchestra presents "A Circle of Forces." The concert is led by director of orchestras Jeffery Meyer conducting Benjamin Britten’s evocative “Four Sea Interludes,” Prokofiev’s powerful “Symphony No. 5” in honor of the composer’s 125th birthday, and the U.S. premiere of Frank Nuyts’ “Tumbleweed Concerto” for cello and orchestra featuring ASU School of Music professor of cello Thomas Landschoot. The concert is open to all, free of charge.

“Jeffery Meyer has brought a passion for music and the performance of new works, a love for education and students, and tremendous experience and artistry to the ASU School of Music orchestral program,” said Heather Landes, director of the ASU School of Music. “It’s a joy to see our students so excited about making music.” The program Nov. 4 marks Meyer’s fourth concert in his inaugural season as the ASU School of Music director of orchestras, and if you haven’t been able to attend the previous concerts, this musical offering is definitely one not to miss.

“The ASU School of Music is a fantastic program because I get to do what I would do in the professional field every day at school, and I think that’s the beauty of studying music in an institution,” said Meghan Ruel, master of music student in violin performance. “The faculty here are open and conscientious of what our generation has to do right now to ensure that art-making is still in existence.”

"The addition of Dr. Meyer to the School of Music faculty has had an overwhelmingly positive effect on the orchestra and the conducting program at ASU,” said Cullan Lucas, current doctor of musical arts in conducting student. “His character and musicianship has brought a new vitality to the orchestra, and by cultivating a stronger relationship between the Phoenix Symphony and the orchestras at ASU, excitement around the program is certainly at an all-time high. As a graduate conducting student at ASU, the addition of the new conducting studio orchestra has provided invaluable podium time exploring major orchestral repertoire with direct feedback both from the players and Dr. Meyer.”

Meyer’s initiative to engage Phoenix Symphony musicians to teach orchestral sectional rehearsals and the addition of the new orchestral studio class have already had an immediate positive effect on the program and are sure to create great momentum and excitement moving forward.

“The young musicians that make up the ASU orchestra program are some of the most talented performers in the United States, and our orchestra program offers the ASU and surrounding community outstanding concert experiences that should not be missed,” said Meyer. “The energy and commitment on stage can be seen and felt by seasoned concert goers as well as those who are new to the orchestral experience.”

“Through Dr. Jeffery Meyer’s audience-building initiative, we are approaching concert attendance on a whole new level,” said Ruel. “From performing pop-up concerts at the Memorial Union in advance of our main performances to visiting local schools and providing musical experiences for area youth to advertising on social media, we are inviting everyone to our concerts, and we hope that the community will come and experience this wonderful music with us.”

The short video below features a day in the life of Jeffery Meyer. We hope this sparks your interest to come and hear the ASU Symphony Orchestra and support live music in Arizona.

The ASU Symphony Orchestra’s performance of "A Circle of Forces" is Friday, Nov. 4, at 7:30 p.m. at ASU Gammage. Admission is free.

Year in Review: ASU robot teaches itself how to shoot hoops — in a matter of hours

Editor's note: This story is being highlighted in ASU Now's year in review. To read more top stories from 2016, click here. Plenty of robots can shoot hoops. It wouldn’t be news that an Arizona State University robotics expert created a robot that can sink a basketball. What’s new is that the robot taught itself to shoot a basketball in a matter of hours, something it would take even an expe... 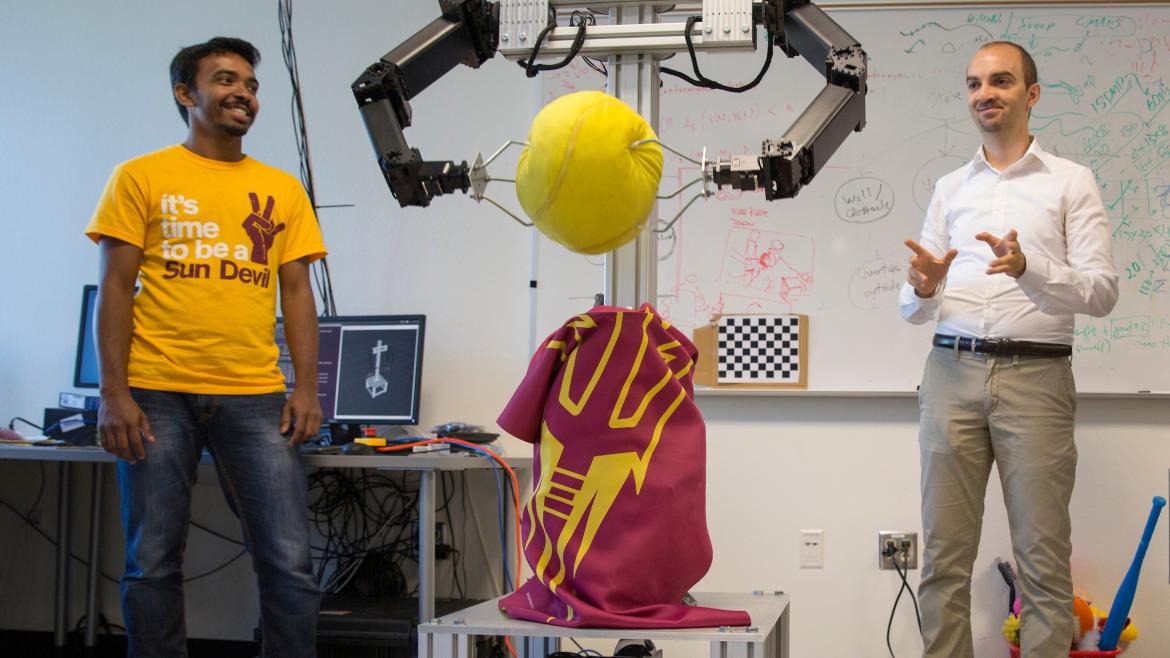 Plenty of robots can shoot hoops. It wouldn’t be news that an Arizona State University robotics expert created a robot that can sink a basketball.

What’s new is that the robot taught itself to shoot a basketball in a matter of hours, something it would take even an expert programmer days to accomplish.

“If you think about it, the human would first have to learn how to” program robot behavior, said Heni Ben Amor. “You’d have to go through a master’s and PhD program. If you take all of that into account, it’s years. If you’re an expert, it’d be a couple of days, maybe a week.”

Ben Amor is an assistant professor in the Ira A. Fulton Schools of Engineering's School of Computing, Informatics, and Decision Systems Engineering, where he leads the ASU Interactive Robotics Laboratory.

He and his team built a robot dubbed Sun Devil with a pair of arms.

“We pose the task to a robot, and through trial and error the robot learns the task on its own, ideally in a limited amount for time,” Ben Amor said. “You go for lunch, and by the time you come back, it’s done.”

He meant that literally. They plugged the algorithms into two robots. One learned in two hours, the other in three.

“For our group this was a milestone,” Ben Amor said.

Robots have wear and tear. They break. The goal here was to have a robot that can learn very quickly and program itself. If robots can program themselves, humans wouldn’t have to do it. It’s a skill that generally requires a doctorate in robotics and computer science.

Sun Devil started from scratch. It didn’t have any kind of idea what kind of movement would allow it to get the ball into the hoop. The only requirement Ben Amor’s group gave it was the ball should be in the center of the hoop.

The robot tried out different movements in the beginning, some of which weren’t dynamic. Bit by bit it figured out how to improve its movements to get the ball closer and closer to the hoop. Automatically, it discovered that sinking the ball actually required a dynamic motion, and it discovered that motion.

The key was that the robot did all of this as quickly as possible, with a minimum of trials. ASU assistant professor Heni Ben Amor's robot, called Sun Devil, taught itself to shoot hoops in a matter of hours. It also taught itself an algorithm for explosive movement. Photo by Jessica Hockreiter/Ira A. Fulton Schools of Engineering

It would take a team of scientists creating equations and models to program a dynamic motion to sink a basketball. Using two arms makes the task even more complicated.

“If you have two arms, it becomes a much more challenging task because these arms have to be synchronized in time in order to make sure the ball doesn’t drop out of the hand of the robot,” Ben Amor said.

The new algorithm created by Ben Amor’s group does this very quickly.

And the result is nothing but net.

Top photo: ASU assistant professor Heni Ben Amor (right) has created a robot that can shoot a basketball after programming itself in a matter of hours. Computer science graduate student Yash Rathore helped show off the technology. Photo by Jessica Hockreiter/ Ira A. Fulton Schools of Engineering