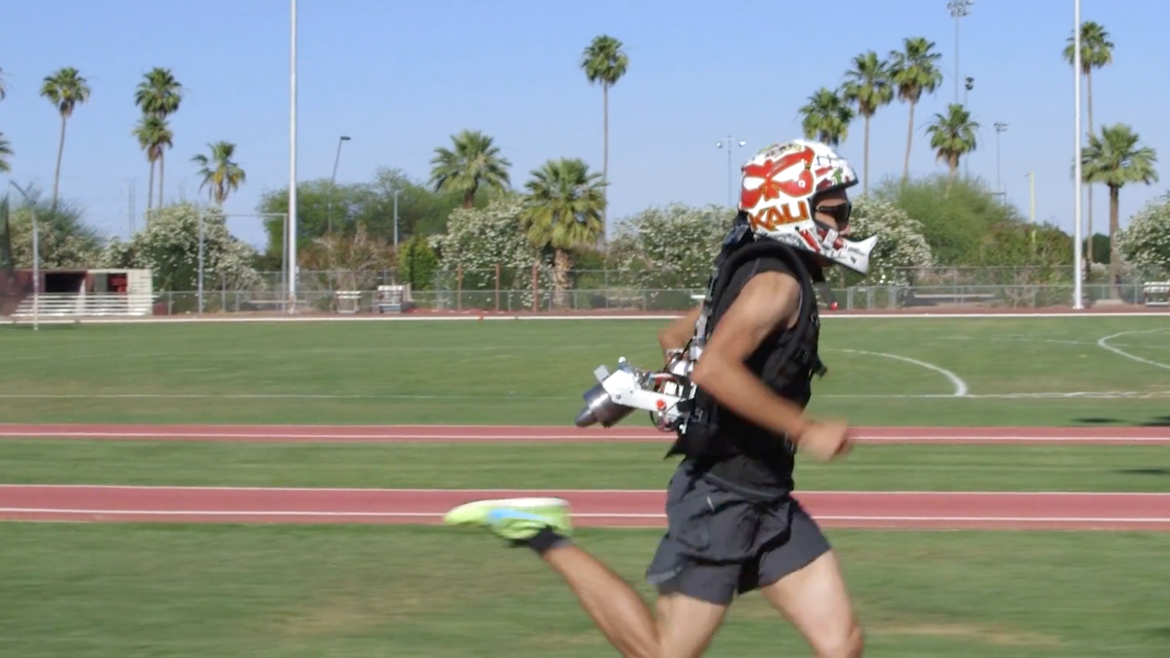 A jet pack designed by an Arizona State University engineer with “a touch of Wile E. Coyote in him,” according to Sports Illustrated, has been updated to be lighter and better suited for use in extreme sports.

Jason Kerestes, robotics engineer with The Boeing Company, says he was able to “eliminate quite a bit of the weight that was on the original version” by getting rid of the aluminum and plastic framing.

Wearing the new, waist-mounted version, a bicycle rider on a test run was able to increase the top speed from 39 mph to 53 mph, and a rider on a long skateboard got up to 32 mph, Kerestes said.

The jet pack gained attention two years ago when a demonstration video circulated, featuring a runner on a track wearing a backpack-style prototype. Media outlets including Sports Illustrated and Gizmodo picked up the story, explaining the original goal of increasing the running speed of U.S. Army soldiers.

“The military gets the coolest toys first,” Gizmodo wrote.

Kerestes, who studied mechanical engineering as a master’s student at ASU, said that aside from making his jet pack smaller and framing it with carbon fiber, he’s been working on new technology with medical potential.

“I’m working on designing a new exoskeleton called REST-Exo, for robotic exoskeletal support technology, to help people that have trouble standing,” he said, mentioning people with knee or ankle injuries. He wants to be able to help them “get back up and walk.”

Tom Sugar doesn’t consider himself a modern-day Iron Man, but he does marvel at how his specialty — wearable robotics or exoskeletons — has taken off and achieved something of blockbuster proportions. Sugar has worked in the field since 1999, when he first set up Arizona State Univesity’s Human Machine Integration Lab.“I’ve never seen wearable robotics as hot as now,” said Sugar, a p... Polytechnic campus
Devices from Sugar's lab run the gamut, from a jet pack to a refrigerated suit.
October 2, 2015

Tom Sugar doesn’t consider himself a modern-day Iron Man, but he does marvel at how his specialty — wearable robotics or exoskeletons — has taken off and achieved something of blockbuster proportions. Sugar has worked in thethe field since 1999, when he first set up Arizona State Univesity’s Human Machine Integration Lab.

“I’ve never seen wearable robotics as hot as now,” said Sugar, a professor in the Ira A. Fulton Schools of Engineering at ASU’s Polytechnic campus. “When I was at the International Conference on Robotics and Automation, everyone was there — Amazon robotics, Google robotics and new companies like Robotis. The conference normally attracts 1,500 people. There were 2,700 this time. It’s just booming.”

That interest in exoskeletons has expanded at ASU too, which hired two new assistant professors in robotics for the Polytechnic campus and one for the Tempe campus. It's a far cry from the days when Sugar was the only robotics professor at ASU. 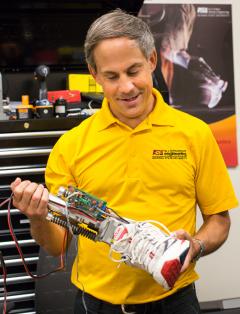 ASU Professor Sugar has received much recognition for his design of SPARKy (Spring Ankle with Regenerative Kinetics). He talks about plans to market prosthetics for lower-leg amputees. Photo by Charlie Leight/ASU Now

In his lab, a rectangular room that is part tech shop and part tinkerer’s paradise with gadgets, test instruments and tools strewn about, Sugar leads a team of ASU researchers and students in building devices to help people overcome a physical disability or provide enhanced performance.

Today, Sugar and his collaborators have five workable, wearable robotic systems and one that has graduated from the lab and moved on to commercial applications. The devices run the gamut, from a wearable jet-pack device that can boost a runner’s speed, to another backpack device designed to alleviate the physical stress of carrying a heavy load, to a small refrigerated suit to keep soldiers cool in a desert environment.

“The overall goal is to build a device that will augment or assist a user,” Sugar said of his exoskeletons. “It doesn’t have to be only for disabled people. It can be able-bodied people, soldiers, obese people or frail people.”

The challenge is to provide a benefit that outweighs the, well, weight that the device adds.

“Ninety-nine percent of the robots add weight, like 10 to 15 pounds for motors and batteries and sensors, but don’t pay for the weight penalty,” Sugar says. “So when you put it on, it’s actually harder to perform than when you are not wearing it.”

Sugar and his group have come up with two innovative designs that achieve “metabolic augmentation,” which means they overcome their weight gain and improve the user’s performance. 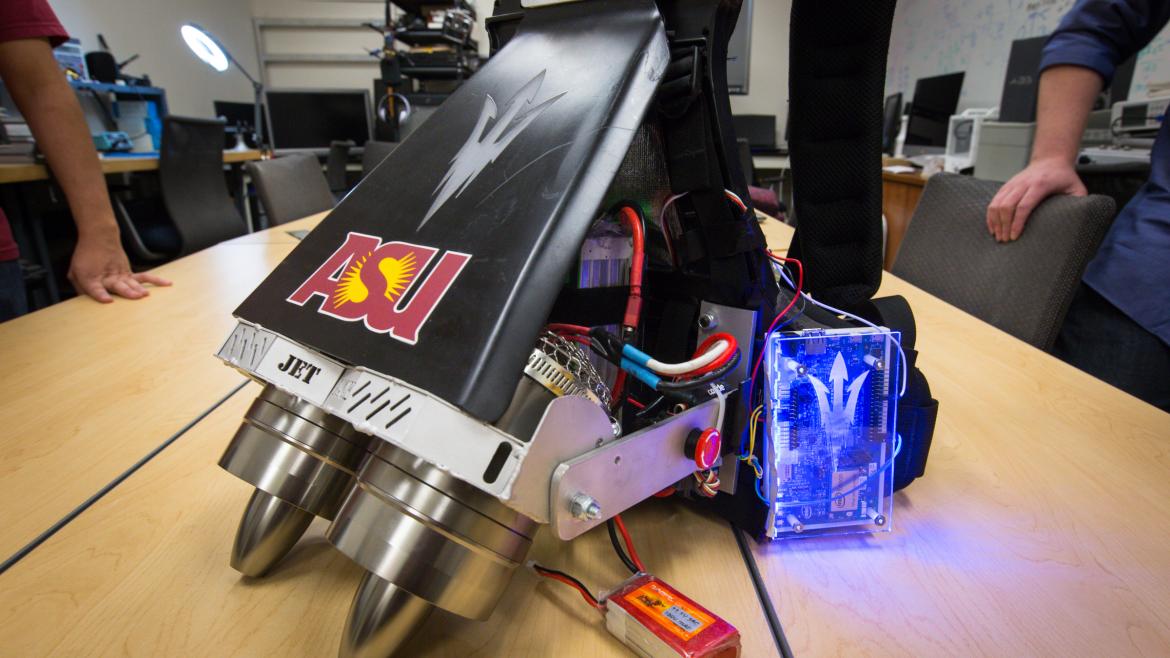 “There are only two groups in the world that have achieved metabolic augmentation. A group at MIT and us,” Sugar said.

Hanging on a rack in the lab is a device called Jet Pack, which is exactly what its name implies (though it doesn't involve flight). It has two small air jets that are strapped to the user’s back. Its design is to give a push to the runner, making his or her performance less taxing and improving overall run time. Developed as part of the military’s 4MM project (for four-minute mile), it provides up to 30 percent metabolic augmentation, but at a cost.

Air Legs is a device that also can aid a runner, or help a hiker, or help somebody carrying a heavy load. It is much more efficient than Jet Pack in how it assists the user.

Air Legs is powered from a high-pressure air tank, similar to those used in paintball markers. The tank is charged externally, then mounted to the system. The system itself assists the user by pushing and pulling on the upper legs at precise intervals. It operates on a real-time control system that uses a phase controller to calculate the exact time to trigger the air solenoids. It demonstrated 10 percent metabolic augmentation at the Army Research Labs in September 2013. 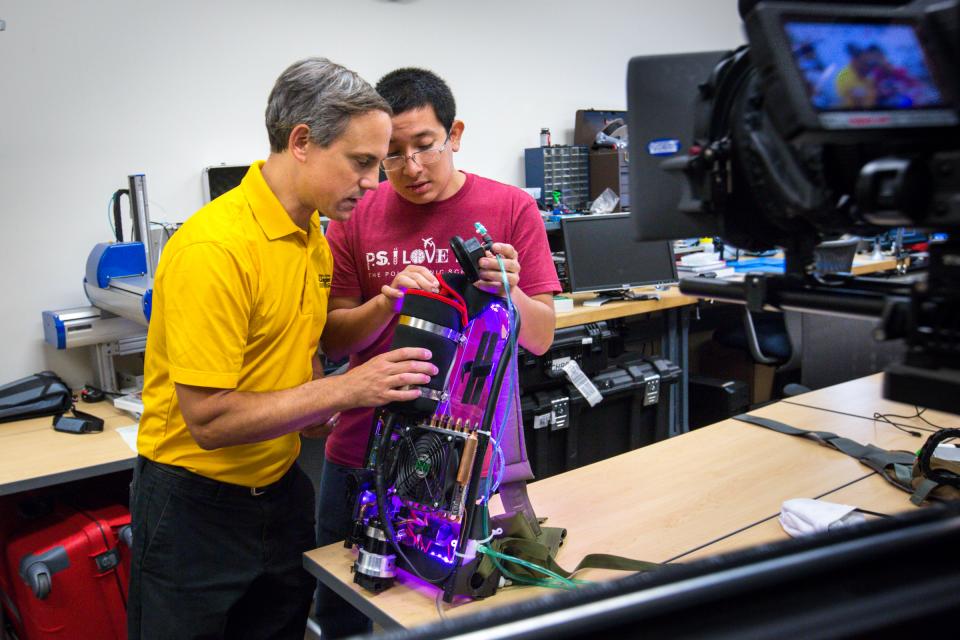 A third exosuit hanging on the rack in the Sugar lab is the Cool Suit, which consists of a small refrigeration unit strapped to the back of a user. Developed for the Air Force, it circulates a cooled liquid across the upper body of the user. It was designed to aid soldiers in harsh, hot desert environments.

Yet another device, the pogo suit is designed to help a soldier carry his heavy backpack by oscillating the weight being carried. When you carry a 100-pound backpack while walking, it doesn’t move with your body but moves as a reaction to your movement. The idea of the pogo suit is to move the backpack with your natural rhythm of walking by oscillating the pack up and down as you walk, saving you energy in the process.

While they differ dramatically in what they try to do, each of these exosuits share a common trait. They deliver a mechanical assist to the user at a precisely timed interval.

“Timing is critical,” Sugar explained. “We use a phase controller so the user controls the robot, the robot doesn’t control the user.

“Say with Air Legs, if you are running and you give the force at the wrong time, the user will trip or fall. The assist must be delivered at precisely the right time or the gait will be off, and the metabolic process will shoot through the roof.” Professor Tom Sugar talks about the projects engineering students, such as senior Austin Melancon, are creating, in his Robotics Lab. Photo by Charlie Leight/ASU Now

The majority of Sugar’s research is funded through the U.S. military. An early project was to develop a spring-loaded ankle for lower-leg amputees. Having such an ankle would give the user greater range in mobility and greater comfort than traditional prostheses that are simply strapped on and carried by the user. The Army was interested in such a device to get an injured soldier back to walking normally.

An early prototype was called SPARKy, for Spring Ankle with Regenerative Kinetics. That device was improved upon and resulted in Odyssey. Sugar and some of his students at the time helped create SpingActive, a company to commercialize the device. He said the group is on the cusp of delivering commercial devices for lower-leg amputees.

Though many of his projects have been funded through the military and the Defense Advanced Research Projects Agency (DARPA), Sugar said the future of wearable robotics is going to be commercial.

“The future will be a long consumer push into this arena,” Sugar said. “They are interested in building devices that can help you hike the Grand Canyon, or devices that help logistics companies for their workers making deliveries or working long hours in the warehouse.

“My belief is that the younger Baby Boom generation will want to stay active, and they like technology. They will wear these types of devices. So instead of a walker or a cane that assists, they might want to wear one of these devices.”

Back in Sugar’s lab, ASU senior Eduardo Fernandez explains what Cool Suit means to him. Fernandez is something of a robotics prodigy. He first began tinkering with them while in middle school, and several Lego robotics competitions later, he made his way to ASU and Sugar’s lab.

“I used building robots as a way to motivate myself and learn more,” Fernandez said.

“This is my education,” he added. “In order to do the Cool Suit project I had to learn all of the thermodynamics before I even started, just to understand the way things work. Once I actually built it, the thermodynamics became much clearer. That’s when the lightbulb went off. The system is really simple and all of the math got simpler as well, because I understood what went on fundamentally.”