Finding a balance: Sustainable energy vs. the natural landscape

Renewable energy alternatives to fossil fuels are being tested around the world, but their acceptance has hardly been seamless. Many communities have resisted, saying installations such as wind farms intrude on natural landscapes.

In one case, a group of developers has been trying to build a series of offshore turbines near Cape Cod, but they've been stymied by local conservationsts who don't want the Atlantic horizon interrupted. 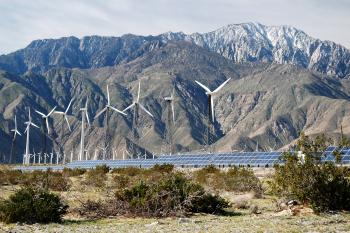 These wind turbines and solar arrays are positioned to catch the wind funneled through San Gorgonio Pass just west of Palm Springs, California. Because the turbines do not require much land, solar arrays are an ideal accompaniment.

Despite such conflict, scientists say it remains important to develop a sustainable energy future. A cross-disciplinary team of researchers has come together to make this their goal.

The team consists of five veterans from different fields ranging from sustainability, to environmental planning to landscape architecture.

Mike Pasqualetti, a professor in the School of Geographical Sciences and Urban Planning, and his colleagues have co-authored and edited a book newly published by Routledge press, The Renewable Energy Landscape: Preserving Scenic Values in our Sustainable Future.

Renewable energy developments globally have been met with concern. These protest messages are from Oaxaca, Mexico and western Virginia.

The book aims to address the tension between conservation efforts and the need to develop sustainable energy alternatives such as wind and solar. The main cause of this conflict, according to Pasqualetti, is the considerable change that the infrastructure brings to natural landscapes.

“For the most part, it is an aesthetic intrusion,” said Pasqualetti. “There are two main groups of opposition. The people living nearby, and the people who don’t want the vistas they’ve always enjoyed to be altered.”

These groups of people have proven their ability to slow development or halt it completely, through lobbying, environmental whistleblowing or other tactics. Their opposition has made developers pay attention to the possibility and cost of lawsuits. Those costs may deter them when deciding whether or not to invest in alternative energy.

The book however, is not intended to discredit the landscape quality concerns, but rather to offer a responsible compromise. If a sustainable energy future is a must, then perhaps the infrastructure could be built in manner where its disruptive effect on the landscape is minimized.

This is the line that Pasqualetti and his fellow researchers are trying to draw. While there is a basic level of intrusion that comes with a 300-foot wind turbine or a five acre solar field, there are ways to minimize the number of people who feel affected.

Strategic placement of new energy infrastructure is very possible, Pasqualetti said. Solar farms, for example, can be placed in many locations, as they have been in Arizona already. Wind farms can be hidden too, by placing them just far enough offshore so that their turbines cannot be heard and are barely visible. While there will undoubtedly still be some environmental issues concerning wildlife, a number of potential problems can be avoided through careful planning and placement.

“To be frank, I think the opposition is still minor, we just don’t want it to be major. Don’t let ‘perfect’ be the enemy of the ‘good,’” Pasqualetti said.

The book’s researchers aren't alone in their vision of responsible alternative energy development. Experts from the private sector share their enthusiasm for a strategic transition into the next generation of energy infrastructure.

Paul Gipe, a wind energy industry analyst with over 40 years of experience and a published author on the topic, joined in the conversation.

“The word transition is a very important term in this. We must make the change to renewable energy. It will happen one way or the other, but it's better if we do it on our own terms rather than in panic,” Gipe said.  “If we don't do it in panic, we can do it right.”

In order to meet the energy demands of an increasingly industrialized world, renewable energy systems are going to require a lot of hardware. This hardware will inevitably become a part our landscapes.

Gipe encourages planners and developers to “do the projects in harmony with the landscape and with the people who live on the landscape.”

Twenty Arizona State University students, both undergraduate and graduate, competed in a fast-paced design competition known as an Adobe Creative Jam.The event, sponsored by Adobe, took place on Arizona State University’s Polytechnic campus on Oct. 4.The competing students were chosen by Adobe based on their design portfolios and skills as showcased in their Adobe Behance accounts.Nineteen stude... 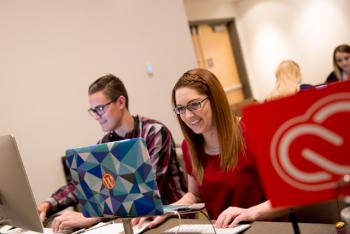 The competing students were chosen by Adobe based on their design portfolios and skills as showcased in their Adobe Behance accounts.

In 2013, the Graphic Information Technology program, now housed in the Ira A. Fulton Schools of Engineering's Polytechnic School, was named a “Partners By Design” member by Adobe. One of only a few dozen schools and programs, the designation "connects the world’s leading art, design and film schools with one another to foster inspired collaboration and conversation," according to the Adobe Partners by Design website. The designation further recognizes the GIT program's innovations in digital design and efforts to adopt best practices in technological instruction through their partnership with Adobe.

Adobe has only previously held a Creative Jam with one other school.

At the event student partners received the theme “Dusk Till Dawn” and had three hours to produce a product, ranging from iPhone app prototypes to video motion animations, in their selected area of Visual Design, Motion Design or UX Design.

GIT seniors Kassidy Arias and her partner Landon Breaux, who is also pursuing a concurrent degree in Aeronautical Management Technology, earned a People’s Choice award in UX (user experience) design by developing Day In & Day Out, a landscape photography sharing app — an impressive feat in such a short time.

“I think the app was successful because it offers something unique. Depending on the user’s selection it changes its look while still feeling cohesive. This visually shows users where they are in the app without much thought,” says Arias.

"Our app allowed users to plan a nightly itinerary with local events lasting from dusk until dawn," Henderson said.

“It fit the theme and was executed cleanly and creatively,” said Beuden, who enjoyed the opportunity to receive positive feedback from people in the industry.

All of the winners took home a one-year subscription to the Adobe Creative Cloud: a collection of design software valued at $600 per subscription for students who wait until they graduate to claim their prize.

Adobe was impressed with the quality of work presented by the ASU students.

“The caliber of student work was very much on par with previous Creative Jam events featuring top-level designers in the industry,” said Liz Schmidt, a senior community manager at Adobe.

Arias says the event helped her build confidence in her work and her educational experiences.

“I'm more confident about going out into the world and finding a web design and development job because now I know that I can create work that compares to those already in the industry,” Arias said.

Susan Squire, lecturer and GIT program chair who helped organize the event with Adobe, is proud that the event “brought the spotlight to our GIT program and students.”

She feels that GIT students were uniquely qualified for this competition because of their remarkable eye for design and exceptional expertise in technology.

“The caliber of student work was very much on par with previous Creative Jam events featuring top-level designers in the industry.”
— Liz Schmidt, senior community manager at Adobe

“Hosting the Creative Jam was a great local community builder,” Squire said. The event brought together around 150 people — a mixture of students, ASU faculty and local creative professionals.

It also strengthened an important industry connection with Adobe.

“It is immensely important for the Polytechnic School, one of the Ira A. Fulton Schools of Engineering, to have a relationship with industry leaders like Adobe … [our] association with Adobe provides international visibility,” Squire said.

"It is extremely meaningful to be a part of a program that partners with Adobe because it helps show that all the hard work we do in our classes will pay off in the future," said Henderson, adding, "It means a lot having Adobe validate our work."

The students were grateful for the opportunity to take their creative work out of the classroom and into the professional arena.

“I was given a platform to let my voice be heard, and my designs be seen,” Arias said.

View the winning projects on Behance.