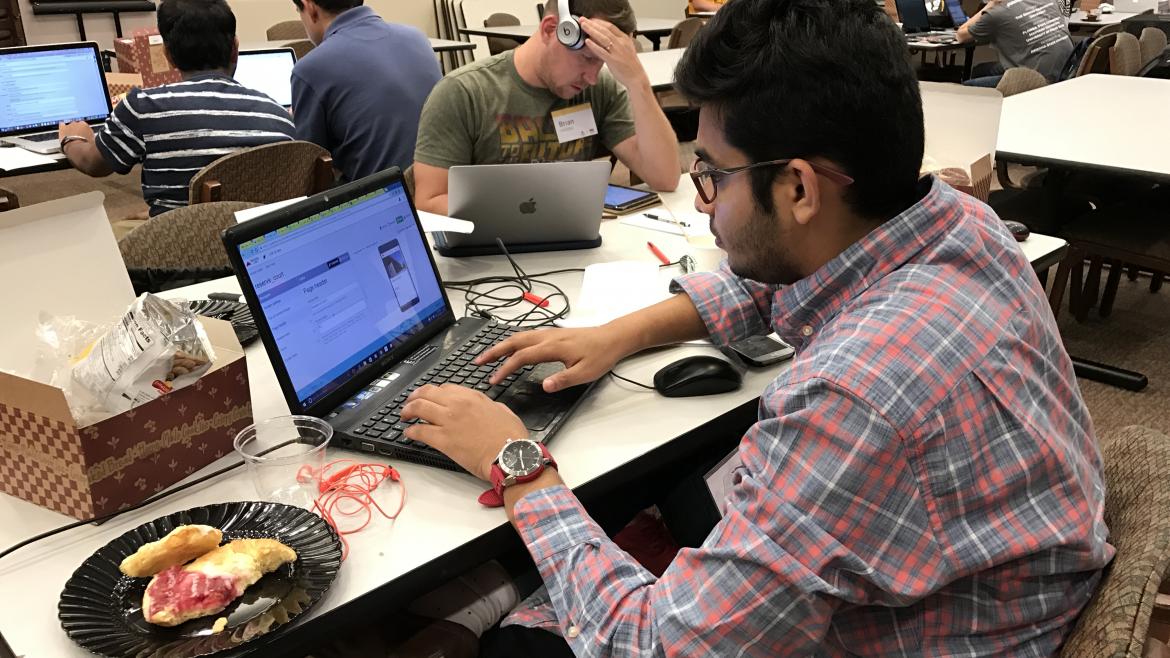 Three ASU students who didn’t know each other before this past weekend are now bonded for life, thanks to their innovation and participation in the Great Mobile Appathon. 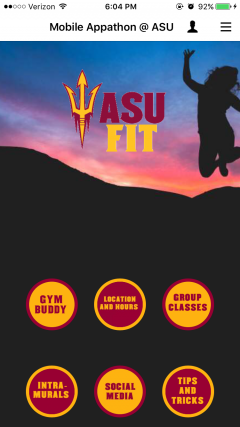 Arizona State University was one of five schools to host the Modo Labs event, Oct. 15–16, which encouraged students from a non-technical background to learn how to develop apps in a competition for scholarship money. Other host schools included Harvard University and Notre Dame.

Sixteen students formed teams and participated in the event, held at the Memorial Union on the Tempe campus and sponsored by ASU’s University Technology Office. Each team chose a theme or idea that was geared toward campus life and efficiency.

Lindsey Moen had no prior app development experience before participating in the event.

“It seemed like an interesting opportunity and neat way to apply for a scholarship, so I signed up,” Moen said.

She then decided to use her interest in basketball and an issue she often faces — finding people to play with — to create the idea behind ASUFit.

“I enjoy playing basketball,” she said, “But not a lot of girls are found playing at the gym. Even though there is a gym buddy sign-up system, it wasn’t as efficient as I thought it could be. Plus, why use pen and paper when you can have an app!” 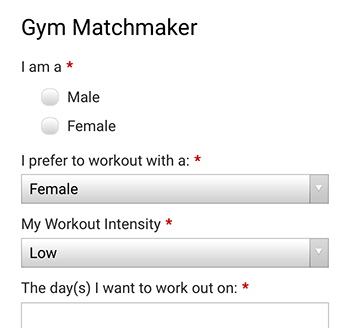 With the ASUFit app, users can select preferences to help match them with a gym buddy.

Moen’s teammates agreed that it would be a useful app on ASU’s campus.

“I’ve seen that ASU has a big fitness culture, but it can be a hard for a newcomer to jump into going to the gym; this app can help with that,” said Vincent Truong, a computer science sophomore.

Samantha Muro, a community health major, was surprised by how much she enjoyed the competition.

“Thinking about how innovative this campus is, I was really surprised I was selected,” said Muro. “But it was really neat to see how much goes into creating an app. It changed my view on the apps the we use every day.”

The three students won $3,000 as their first-place prize and now will compete against other first-place apps from the other host universities across the country. They all intend to continue competing next year.

“I hope that this becomes more popular at ASU,” Truong said. “It would be interesting to see what other people’s ideas are as well.”

The team is excited to see how they will rank nationally, and to see their app through completion and come to life here at ASU — plans are in motion to move it toward production.

“I think it is so awesome that this is could potentially be used by ASU,” Muro said. “I love this school and seeing something that I did will make a difference on campus.”

Steve Schramm started out at Arizona State University as a chemistry major and wanted to go to law school. After struggling with some of his early science classes, he asked for advice from one of his professors. If he wanted to be a lawyer, the professor steered him toward a degree in economics.In his junior year, Schramm again asked for advice, this time about his resume. The professor said it lo...

Steve Schramm started out at Arizona State University as a chemistry major and wanted to go to law school. After struggling with some of his early science classes, he asked for advice from one of his professors. If he wanted to be a lawyer, the professor steered him toward a degree in economics.

In his junior year, Schramm again asked for advice, this time about his resume. The professor said it looked a little light and suggested he look into internships. 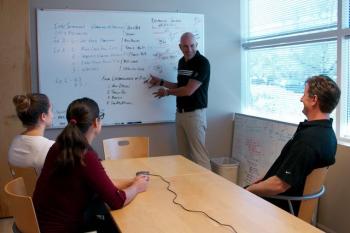 ASU was able to line up two consecutive internships. One was with the Arizona Health Care Cost Containment System (AHCCCS), Arizona’s Medicaid agency.

Schramm’s first day interning at AHCCCS was also the first day of the new state Medicaid director at that time, who took him under his wing and said, “Young man, I think you have a future in health care.”

Nearly 30 years later, Schramm and his company Optumas are providing the same kind of life-changing internships to students in ASU’s actuarial program and are backing them up with a newly endowed scholarship.

“ASU gave me the opportunity for multiple internships, and so it was easy for us to say we want to have a partnership with the School of Mathematical and Statistical Sciences and the actuarial program. It’s a natural extension of what ASU did to help me become successful,” said Schramm.

It was Tim Doyle’s idea for Optumas to expand their relationship with ASU by making an investment in the actuarial program in the form of endowing a scholarship. He is a senior actuary at Optumas and member of ASU’s actuarial advisory board.

“The benefit that we’re going to get is more of the students in the actuarial program will have a better understanding of what Optumas does. We’ll have an opportunity to expand our relationship with the program,” said Doyle.

Schramm agreed it was an easy decision. “We’ve had such good luck with the interns we’ve gotten from ASU. So any ability to raise our visibility with the actuarial program is a no-brainer.”

“It’s very proactive. We now have fantastic interns brought to us. The team at ASU’s actuarial program is saying, we’ve got this person who has a really incredible academic background and they’ve expressed an interest in health care, so we think they’re the perfect match for you.”

“It’s great because it saves us time and effort. As an employer, you have to focus on getting your job done while you’re growing the business and while you’re doing all these other things. To have somebody help us be successful, it’s an easy decision.”

ASU’s actuarial science program excels at matching soon-to-be graduates with employers. In fact, two-thirds of its students who will graduate next May have already secured full-time positions after completing their internships over the summer.

This success is a credit to program coordinator Jelena Milovanovic, PhD, who works hard to build meaningful relationships with local actuarial companies and gets them involved in every facet of the program.

With the Optumas Actuarial Science Scholarship, the company is looking for well-rounded students. It is placing less emphasis on grade-point average and wants students who are willing to challenge themselves.

“Students going down an actuarial track bring a special amount of desire because of the amount of extra work that is associated with it,” Schramm said. “ASU is doing a fantastic job at producing prolific exam takers. The exam process is hard. The preparation that they get is spot on. That’s what we’re very excited about.”

He is enthusiastic about his company’s expanding partnership with the university. “ASU was such an important part of my development into who I am.” 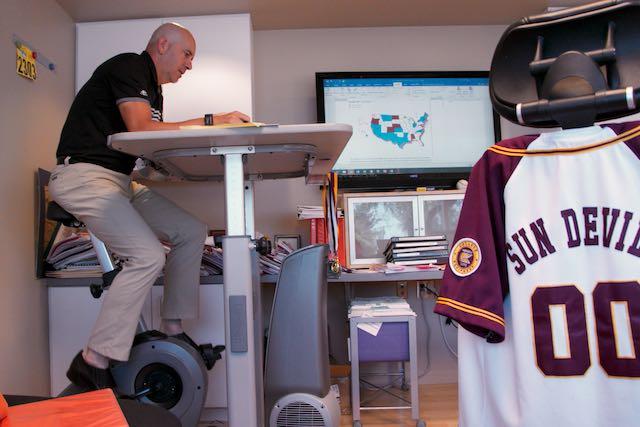 Schramm lives just up the street from his Scottsdale office and rides his bike or skateboards to work every day. His office includes all the modern technology you might expect, along with a collection of hanging medals (the currency for ping-pong, he says). In the corner sits a large desk featuring bike pedals below, which is fitting for the avid cyclist.

“I’ll be on conference calls and sit there and spin, listen in and provide feedback,” he said.

There’s an ASU baseball jersey draped over his chair. Baseball was the first sporting event Schramm attended when he went to ASU. He even caught a baseball at that first game.

“I’m a huge baseball guy,” he said with a smile.

Schramm and a partner founded Optumas in 2006 with the desire to change the way health care is delivered. The company employs about 30 people, with plans to expand to 50 to 75 employees.

“We are firm believers in the fact that everyone has a fundamental right to quality health care,” Schramm said.

“What we want to do with our consulting work is make it so more people have access to quality health care because that’s what makes you a productive member of society.”

This sentiment echoes what ASU President Michael Crow has promoted in the university’s charter as “a comprehensive public research university, measured not by whom we exclude, but rather by whom we include and how they succeed.” 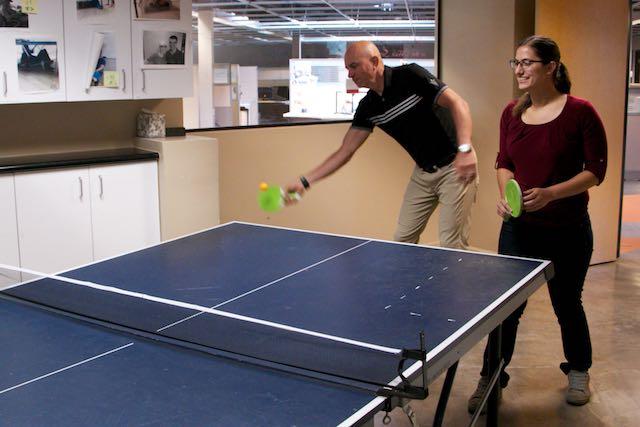 Schramm credits ASU for helping him achieve his career goals.

“What I found at ASU was a very welcoming, open group of academics, support personnel and students that were all about ‘What can we do to put you in a position to succeed?’”

ASU also provided Schramm a sense of community. “It’s such a big school and yet you can still feel like it’s a small community. I have friends that I met at ASU that I still stay in regular contact with.”

Optumas enjoys partnering with ASU because of the quality of the individuals they’ve been able to find. “We’re a relationship-based consulting firm. And our relationship with ASU and the actuarial program is exactly what we need. We want somebody who’s going to think about what our business is all about, and then help steer students and graduates to us that are going to make us successful.”

Schramm and his team at Optumas are making life better for people.“We make certain that the most vulnerable of American society have access to quality healthcare.”

So why would a student want to intern or work at Optumas?

“You’re going to make a difference in the world — on a scale of millions of people.”