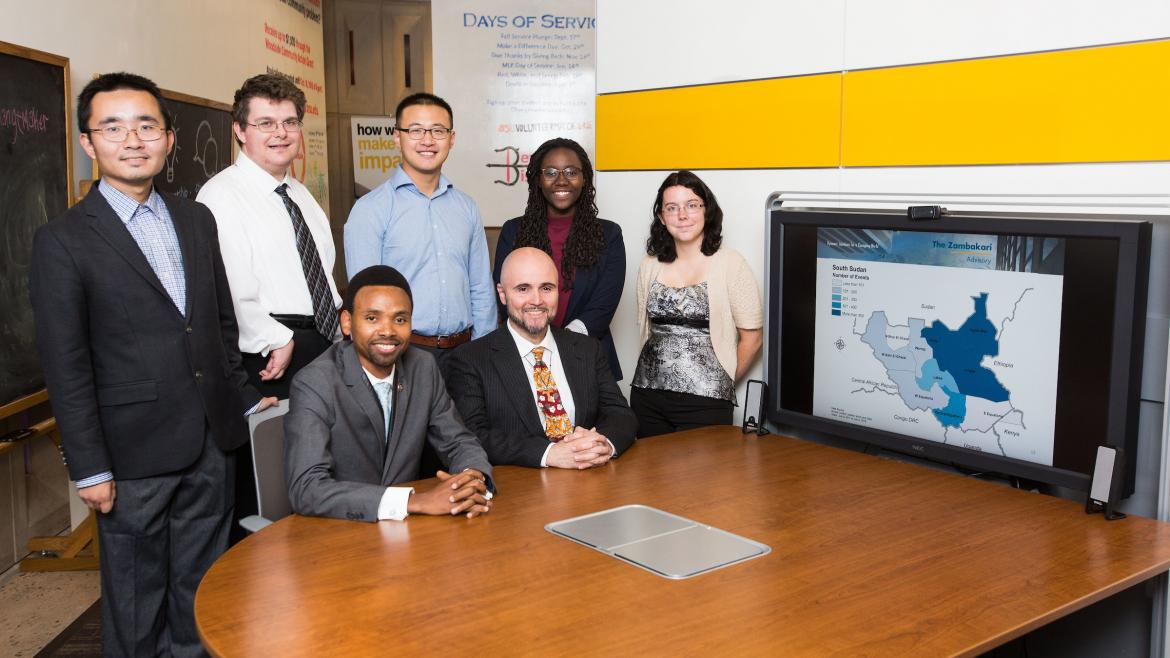 In many ways, the intersection of 48th Street and Thomas Road in Phoenix is unremarkable. Like a lot of busy cross streets in the city, there’s a convenience store, a bus stop and a Mexican food restaurant.

But in August 2001, just around the corner from that intersection, a most remarkable journey was unfolding as William Pay Tuoy-Giel was adjusting to life in America. After spending years living in a group as one of the Lost Boys of Sudan, having an apartment all to himself was strange. So was grocery shopping, with all the unfamiliar foods, and trying to catch the bus, which ran on a confusing time schedule.

Fifteen years later, the 2006 ASU graduate is the executive director of a nongovernmental organization based in a city he once knew nothing about. The Nile Institute for Peace and Development (NIPD) is an independent group dedicated to research and advocacy that empowers South Sudanese communities in the Diaspora, as well as those still living in South Sudan.

The institute seeks to “play a positive role in promoting peace and development, which will in turn foster cooperation and understanding among various ethnic communities across South Sudan and the world,” according to its site.

In early September, on the heels of the dissolution of a barely year-old peace deal that resulted in weeks of fighting and the deaths and rapes of innocent civilians and foreign aid workers in his home country, Tuoy-Giel and other members of NIPD held a peace forum with the theme “In Search for Stability and Durable Peace in South Sudan.”

Also in attendance were founding board members Elenore Long, an ASU associate professor of English, and Christopher Zambakaripictured above with ASU student interns, a fellow ASU alumnus and South Sudanese refugee.

Like Tuoy-Giel, Zambakari spent much of the 1990s bouncing from refugee camp to refugee camp, from country to country across east central Africa, before being relocated to PhoenixSince the early 2000s, Phoenix has been a resettlement site for several hundreds of refugees from South Sudan, according to the International Rescue Committee. in 2001 by the International Rescue Committee.

South Sudan’s history of unrest goes back to the 1950s, when the country of Sudan gained independence from Britain. At the time, a host of economic, cultural and religious disparities existed between the north and south regions of the country, resulting in a civil war that lasted from 1955 to 1972.

It wasn’t long before remaining tensions led to the beginning of another civil war in 1983, which lasted 22 years, until 2005. The period from 1955 to 2005 is sometimes considered a single conflict, with an 11-year cease-fire separating two violent phases.

Six years after the end of the second civil war, South Sudan achieved independence, becoming the world’s youngest country in 2011. By that point, war had claimed the lives of at least 1.5 million people and displaced more than 4 millionaccording to a July 2016 BBC News report — including Tuoy-Giel and Zambakari. 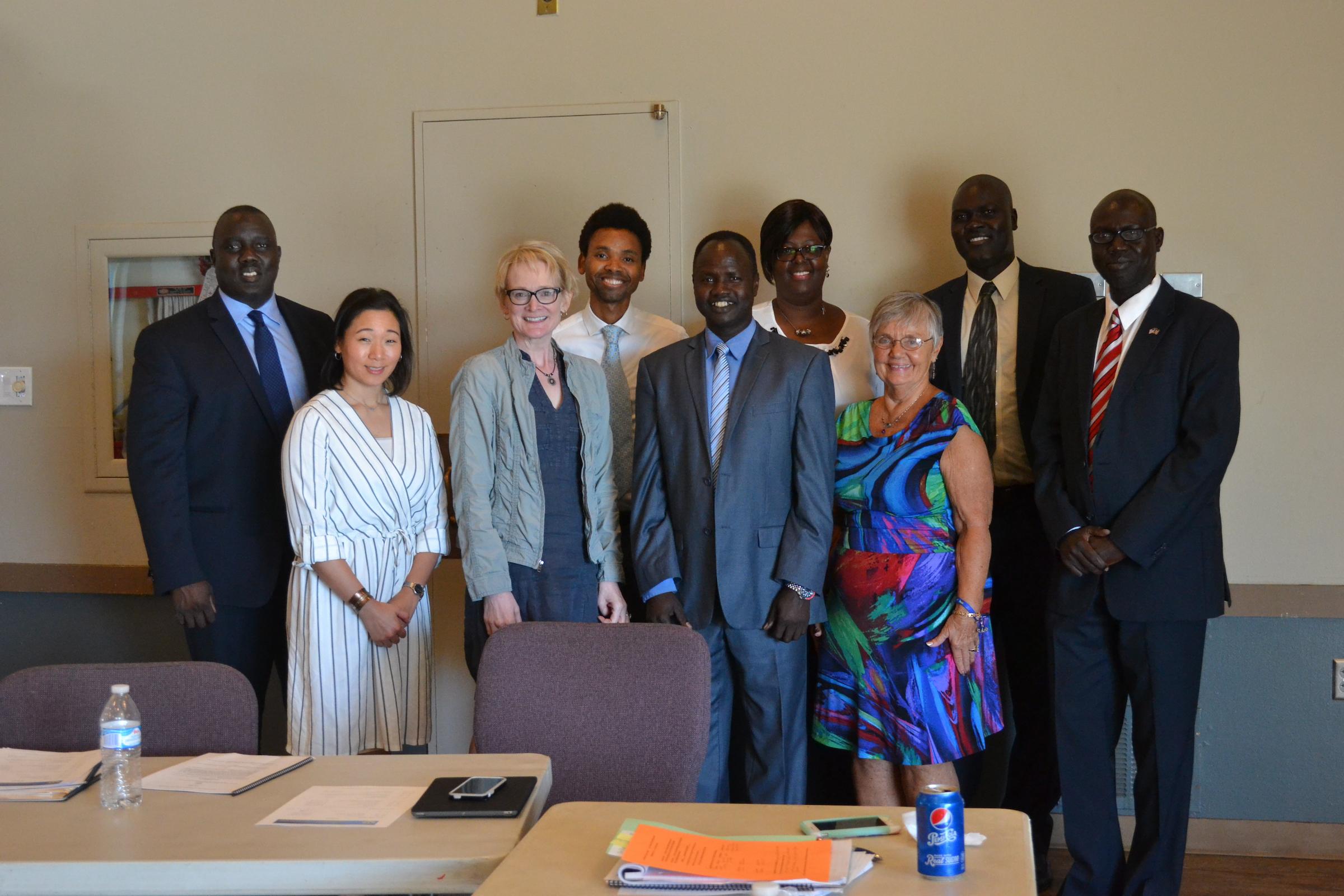 In 2006, they both graduated from ASU and set out to find work that would allow them to better their communities.

“When I graduated from ASU, I was very naive and young, with a lot of energy,” said Tuoy-Giel. “I wanted to change the world.”

He spent time on the board of the South Sudanese Community Association of Arizona. But still, he felt there was more he could be doing. Then, in 2013, an idea came to him.

“One morning I just woke up, came up with the name, and ran downstairs and wrote it down,” he said of the Nile Institute for Peace and Development. “I told my wife, ‘I have this unique idea.’ ”

What was unique about it was its approach to the challenges being faced by South Sudanese refugees. Tuoy-Giel envisioned an organization that didn’t just provide helpful services but one that worked to find the root cause of issues and used that knowledge to enact solutions.

He enlisted the help of Zambakari, who’d kept busy since his days at ASU, earning two master’s degrees and a doctorate in law and policy, and doing extensive research on political reform in Sudan. Tuoy-Giel also recruited Long, who specializes in community literacy, to listen to the stories of the refugees and glean an understanding of their common needs and concerns.

While Zambakari worked with ASU student interns on researching political reform, Long got to work meeting with members of South Sudanese communities in Phoenix, talking about their experiences as people living under conditions of forced migration.

One of those concerns is day care. Many of the women Long spoke with expressed how it was a challenge to afford care for their children while they worked during the day, so they often resorted to help from elders — which wasn’t always a great option either, as it turned out.

In one instance, a grandmother was taking care of a young boy when he had a seizure. Because she did not speak the same language as the 911 operator, she was unable to communicate the dire situation.

“The grandmother never wanted to take care of children again,” said Long. “She went to her grave … one of the last experiences she had was not coming through.” 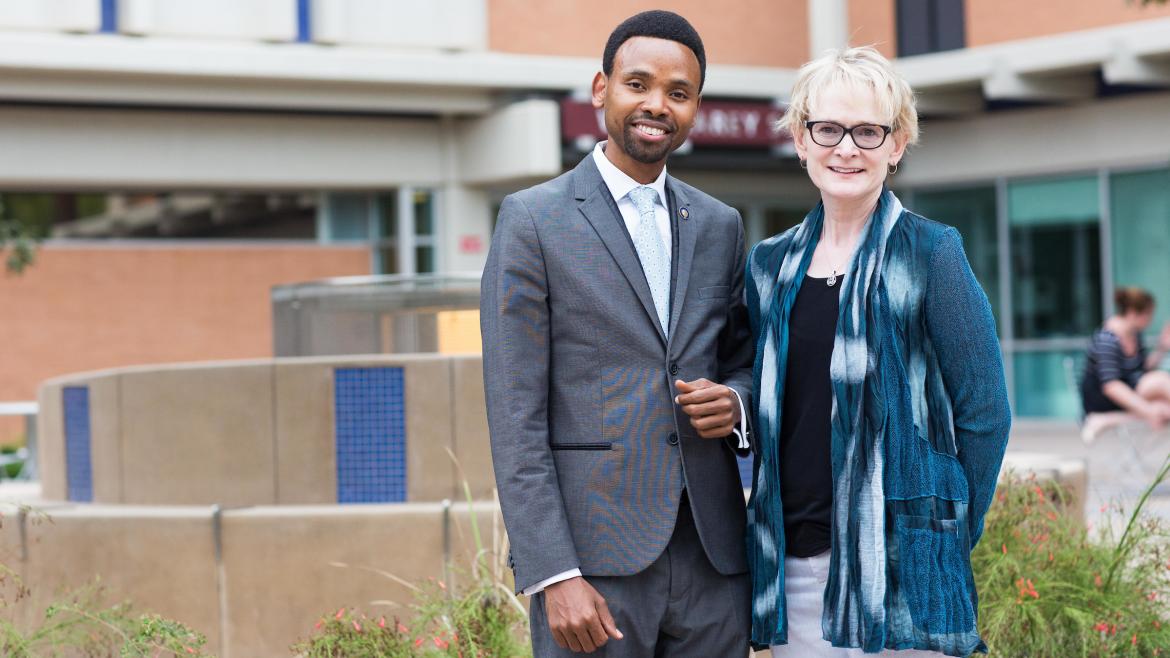 Christopher Zambakari and Elenore Long each contributed their
scholarship to the Nile Institute's efforts.
Photo by Deanna Dent/ASU Now

Had she been empowered through education, that may not have been the case. Understanding how situations like that are representative of certain shared concerns among South Sudanese communities is helping Long determine the most efficient form of a literacy class or similar service offered to them through NIPD.

Long contributed a chapter based on her findings to the edited collection “Crossing Borders, Drawing Boundaries: The Rhetoric of Lines Across America.”

“What Ellie and her team are doing, which is getting the narratives and getting participation from the people themselves, and bringing them to the table, is huge,” said Zambakari. “And people forget that.”

As for his part, Zambakari is using his own experiences as a refugee to inform his research into the nation-building challenges faced by South Sudan as it attempts to move on after mass tragedy. And there are a lot.

One involves drafting a constitution that speaks to the aspirations of the people who make up the country, instead of using a pre-existing template.

“When you read the U.S. Constitution, it says, ‘We the people,’ and that document was drafted in that spirit,” said Zambakari. “In South Sudan and many places in Africa, there is no such thing [so people assume they can] just do it the way it’s done in the U.S. Then, when it falls apart, people wonder why.”

“This notion of the failed state, nobody is really questioning what kind of state is failing,” Zambakari said. “It is a specific type of state in Africa that is coming under pressure from within. Historically, the only way to rule that state has been through force.

“So I’m contending with the notion of, can we build a nation and a state in South Sudan without resorting to tremendous violence? … Can we do it by eliciting and asking for the consent of the people themselves without having to resort to repressive means to do it?

“Unless we manage — we, collectively, the people of South Sudan — manage the transition, South Sudan is basically setting itself up to explode, because the regime has not really been in tune with the people.”

Zambakari wants to look at how to rebuild South Sudan in a more participatory way, that involves people voting, and public debate and discourse. It’s “not a quick fix,” he says, but rather part of a “sequential approach” to the process of setting up a nation to succeed.

He presented his research findings at NIPD’s September meeting to help focus their goals for the upcoming year. The findings were also published by the International Journal of African Renaissance Studies in the study “South Sudan and the nation-building project: Lessons and challenges,” which was ranked among the most influential articles of 2015 by one of the most prominent publishing houses in the U.K.

Looking forward, Tuoy-Giel says NIPD will be looking at how to begin establish a presence nationwide, though the home base will remain in Phoenix. They’d also like to set up another base in Juba, the capital of South Sudan, that would act as a bridge between those in the Diaspora and those still in Sudan.

“One of the major challenges for any organization from the get-go is how to build unity among these communities,” Zambakari added. “You need a unified core to create that channel between those here and those at home, that space where people can come and discuss whatever issues they’re facing.”