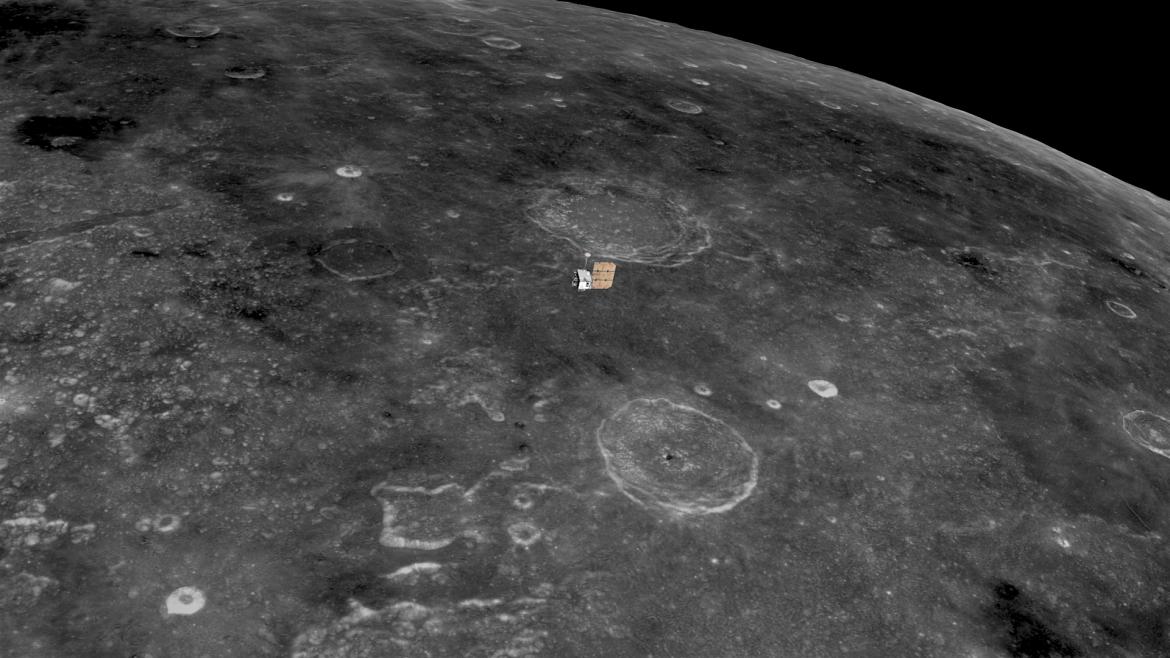 The moon's surface is being "gardened" — churned by small impacts — more than 100 times faster than scientists previously thought. This means that surface features believed to be young are perhaps even younger than assumed. It also means that any structures placed on the moon as part of human expeditions will need better protection.

This new discovery comes from more than seven years of high-resolution lunar images studied by a team of scientists from Arizona State University and Cornell University. The team is led by ASU's Emerson Speyerer, who is also the lead author of the scientific paper published Oct. 13 in Nature.

"Before the Lunar Reconnaissance Orbiter was launched in 2009, we thought that it took hundreds of thousands to millions of years to change the lunar surface layer significantly," Speyerer said. "But we've discovered that the moon's uppermost surface materials are completely turned over in something like 80,000 years."

The images used in the discovery come from the Lunar Reconnaissance Orbiter Camera (LROC) on NASA's Lunar Reconnaissance Orbiter spacecraft. LROC is run from the Science Operations Center on ASU's Tempe campus; the instrument's principal investigator is Mark Robinson, a professor in ASU's School of Earth and Space Exploration (SESE). Robinson is a co-author on the paper along with Reinhold Povilaitis and Robert Wagner, both SESE research specialists, and Peter Thomas of Cornell.

"We used before-and-after images taken by LROC's Narrow Angle Camera," Speyerer said. During the seven years the mission has run so far, he said the team identified 222 new impact craters that formed during the mission. "These range in size from several meters wide up to 43 meters (140 feet) wide."

Bang! A new moon crater appeared between Oct. 25, 2012, and April 21, 2013. At 12 meters (40 feet) wide, the crater is not hard to spot in the image, but the starburst pattern of ejected debris is elusive to trace. Image by NASA/GSFC/Arizona State University

The number of new craters found by Speyerer and colleagues is greater than anticipated by standard impact-modeling rates used by lunar scientists. The discovery has the effect of giving lunar surface features younger ages.

Theory says that a lunar geologic unit should accumulate a certain number of craters of a given size in a million years, for example. But if it turns out that impacts are making craters more quickly, then it takes less time to reach the benchmark number, and the geologic unit is in reality younger than theory predicts.

"A higher rate of impacts on geologic units with ages assumed to be already young turn out in fact to be even younger than we previously thought," Speyerer said. However, to be certain, he said, LROC needs to continue taking images to verify the discovery and firm up the actual impact rate.

"Measuring the recent impact rate was one of the important tasks that led NASA to fly the Lunar Reconnaissance Orbiter," Robinson said. Besides the value to scientists in pinning down surface ages, he noted there are also practical aspects.

Any future human exploration of the moon will involve supply structures, rockets and other equipment being parked on the surface for long periods of time, even if living quarters are underground. Knowing the present-day rate of impacts will be important in planning to protect equipment left on the surface.

When the team examined the new craters found by the LROC survey, they noticed that the craters were surrounded by starburst patterns that obviously formed during the impact.

While the pattern details are complex, the researchers found that an impact throws out several kinds of debris. Some of it lands nearby. But impacts also throw small amounts of debris in hyper-velocity jets at speeds of 16 kilometers (10 miles) per second. This material — vaporized and molten rock — shoots over the surface, disturbing the upper layer of lunar soil and changing its brightness.

"In addition to the new impact craters and starburst debris patterns, we observed a surprising number of small surface changes which we call splotches," Speyerer said.

While splotches lack the detectable rims that craters show, the team thinks the splotches are most likely caused by small impacts of material thrown from larger impacts.

"We see dense clusters of splotches around new impact sites," he said. "This suggests that many splotches may be secondary effects caused by material thrown out from the primary impact event." 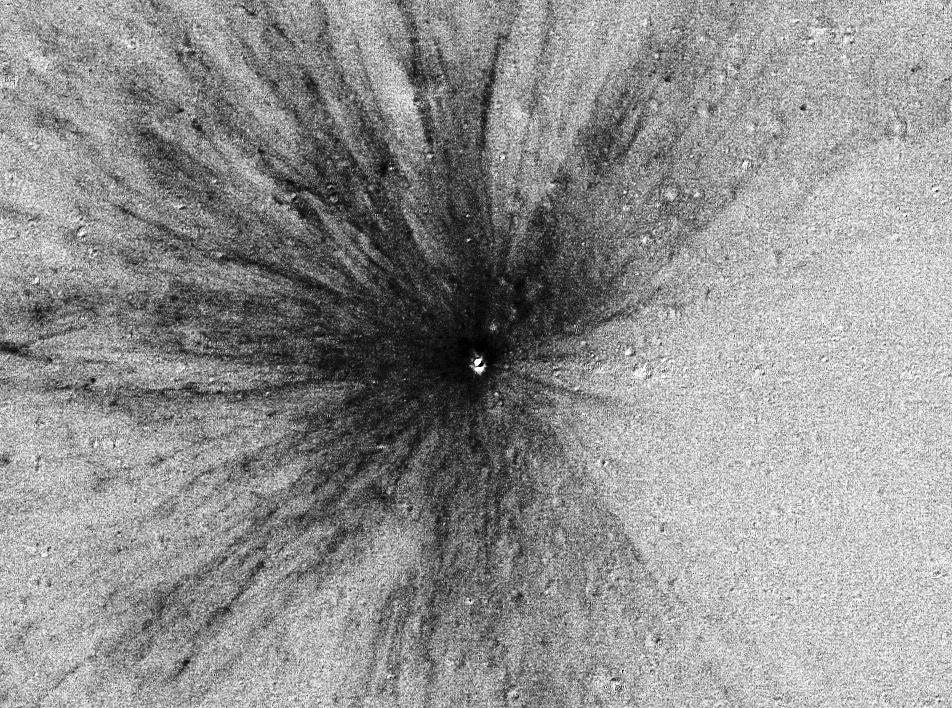 To reveal the pattern of debris from the 12-meter crater impact, the team divided the "after" image by the "before" image. The result brings out a striking starburst pattern — and shows that some debris flew farther than 150 crater-diameters. The image is 1,300 meters (4,300 feet) wide. Image by NASA/GSFC/Arizona State University

From 14,000 pairs of before-and-after LROC images, the scientists identified more than 47,000 splotches.

"We estimated their accumulation over time and measured their sizes," Speyerer said. "From this, we inferred how deeply each splotch dug up the surface. That gave us an estimate of how long it takes to effectively churn or 'garden' the upper few inches of lunar soil."

The gardening time amounted to a geological eyeblink: not millions of years, and not even hundreds of thousands of years. As Speyerer explains, "We found that 99 percent of the surface would be overturned by forming splotches after about 81,000 years."

Why the big difference in turnover time?

Two additional findings come from revising the impact rate. First, remote sensing observations of the surface need to factor in a much higher turnover rate when looking at data from mineral-detecting X-ray and Gamma-ray spectrometers, which probe this upper surface layer.

Second, the churning rate will be important information for future planners of moon bases. Surface assets will have to be designed to withstand the impacts of small particles traveling up to 500 meters per second, or 1,100 miles per hour.

Looking to the future, NASA has recently approved the Lunar Reconnaissance Orbiter for a two-year extended mission, and LROC will continue to acquire valuable cratering observations.

"As the mission goes on," Robinson said, "the odds increase for us to find the larger impacts that occur less frequently on the moon. Such discoveries will let us better pin down the lunar impact rate and also better characterize the most common process that shapes planetary bodies across the solar system."

Arizona State University was recently approached with a unique opportunity, which is the result of our fundraising success, creative partnerships and plans to expand the stadium's activity beyond football season to a 365-day-a-year experience. This opportunity would launch us beyond the initial scope of the stadium reinvention and in a way that reflects the forward thinking and innovation for whi... Arizona State University was recently approached with a unique opportunity, which is the result of our fundraising success, creative partnerships and plans to expand the stadium's activity beyond football season to a 365-day-a-year experience. This opportunity would launch us beyond the initial scope of the stadium reinvention and in a way that reflects the forward thinking and innovation for which Arizona State is known.