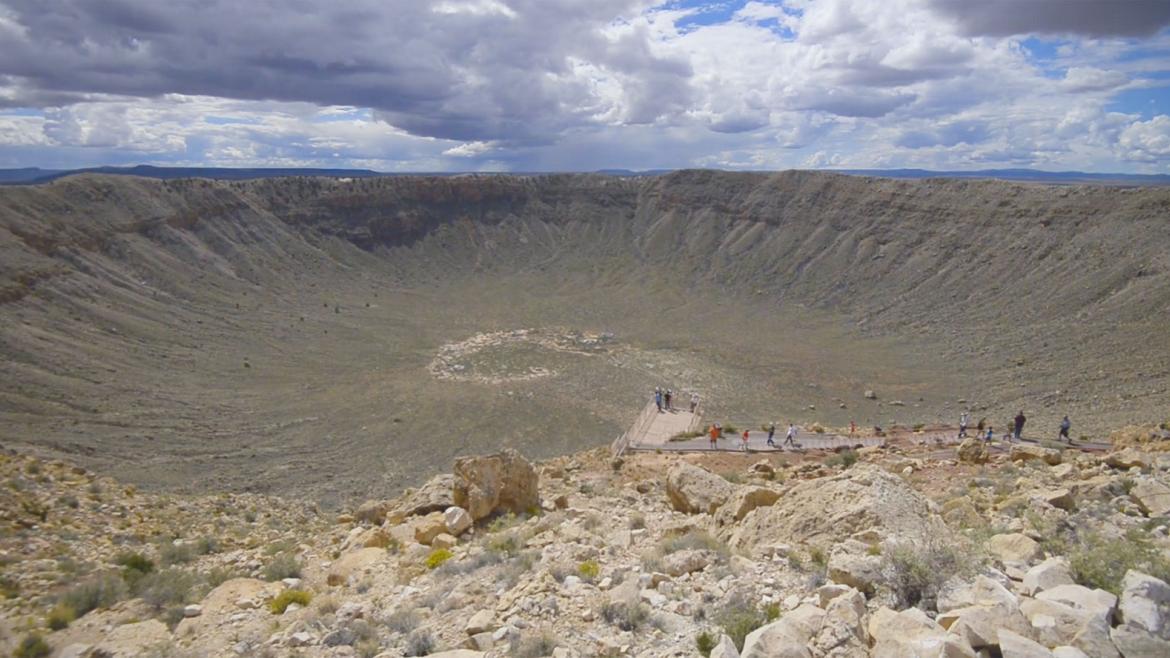 About 50,000 years ago, an asteroid collided with the Earth, leaving a mile-across impact crater in what is now northern Arizona.

And every fall, it makes a new impact on Arizona State University students.

Those enrolled in SES 121: Earth, Solar System and Universe — an introduction to Earth and space sciences for incoming majors in the School of Earth and Space Exploration — take a day trip to northern Arizona each fall to gain "eyes-on and hands-on" experience in the field, beyond just textbooks and lectures.

"What does the geology really look like and feel like, in person? What do professional astronomical telescopes look like and what can you see through them, in person?" said professor Jim Bell, a planetary scientist who co-teaches the course with associate professor and astrophysicist Jennifer Patience; they handle different parts of the trip.

"Lots of research shows that students learn best by seeing and doing and experiencing concepts and processes firsthand, rather than just looking at pictures or memorizing facts.

"The only way to get those kinds of experiences is to go out there and visit these places, and we're very lucky here in Arizona to have such a great collection of geological phenomena and astronomical resources right here."

The site visits begin at Meteor Crater (pictured above) and continue at Walnut Canyon National Park for additional geology lessons. They then travel to Lowell Observatory in Flagstaff for astronomy instruction and telescope observing. Watch the crater visit from this year's visit in early October.

"We take a similar trip with SES 122 in the spring, up to Payson to see firsthand many of the details of the geology of Arizona, the Colorado Plateau and the desert Southwest," he said. "Professor (Mark) Robinson takes students in his planetary geology class on a field trip up to visit volcanic, impact, tectonic and sedimentary features in northern Arizona.

"Other professors take classes on field trips down to the professional telescopes outside of Tucson, and even out to JPL (Jet Propulsion Laboratory) in Pasadena, to see and meet firsthand many of the people involved in planetary and space science.

"Also, we have lots of hands-on experience for engineering-focused students as well, including introductory to senior capstone classes where students design, build, test and operate a variety of robotic systems and software applications. It really is a dynamic, and hands-on, learning environment."

When Spenser Babb-Biernacki began her undergraduate degree at Arizona State University, she thought she wanted to get lost in a world of books. She started as an English literature major, pursuing her love of the written word, hoping it would lead her through college and into a career she would enjoy.But something was nagging at her. Her path didn’t feel quite right. She felt a little lost.Babb-...

When Spenser Babb-Biernacki began her undergraduate degree at Arizona State University, she thought she wanted to get lost in a world of books. She started as an English literature major, pursuing her love of the written word, hoping it would lead her through college and into a career she would enjoy.

But something was nagging at her. Her path didn’t feel quite right. She felt a little lost. 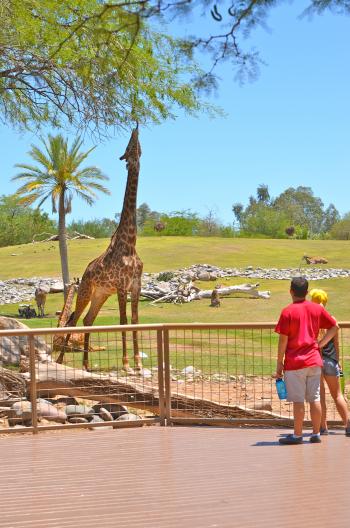 Visitors watch a giraffe snack on leaves at the Phoenix Zoo. The zoo and the ASU School of Life Sciences partner on summer interships in which students learn about all aspects of conservation science: animal husbandry, lab experiments and fieldwork. Photo by Sandra Leander/ASU Download Full Image

Babb-Biernacki began to realize what was missing from her daily life: her love of animals and conservation. She decided to switch majors and study conservation biology with the School of Life Sciences and has never regretted that decision.

“I always felt I was meant to be outdoors in an active field like this,” Babb-Biernacki said. “My mom has a deep love and respect of animals and nature and instilled that in me growing up. I have a real passion for making a difference.”

Babb-Biernacki’s mom had a membership to the Phoenix Zoo when her daughter was young, and Babb-Biernacki has many memories of exciting weekends at the zoo. When the opportunity arose for an internship through a partnership between ASU School of Life Sciences and the Phoenix Zoo, she couldn’t wait to apply.

At the end of her junior year, she was awarded a three-month summer internship that provided her with the unique experience of working with several understudied animals through the zoo’s conservation program.

Again, a childhood memory surfaced, reminding Babb-Biernacki that she was heading down a path she had always known she wanted.

“A few years ago, we were at Disney World, and they actually have a conservation station in their Animal Kingdom and I was just amazed by it,” Babb-Biernacki said. “I was looking in all the labs, I was listening to people doing their educational spiels and I just loved it. I was thinking this is something I would love to do.”

She got to spend the summer doing just that.

The Phoenix Zoo operates its internships in loops, such that student interns get to try their hand at all aspects of conservation science: animal husbandry, lab experiments and fieldwork. Through this program, Babb-Biernacki found herself working with all of the nine local species on which the zoo focuses its conservation efforts — everything from the tiny, 3-millimeter Springsnail to mammals including the Mount Graham squirrel.

She started her internship working in the blackfooted ferret exhibit before moving to the outdoor exhibits and conservation center. She was also encouraged to work on her own experiment with a species rarely studied: the narrow-headed gartersnake.

“Conservation has different focuses. Sometimes you don’t realize what your interests are until someone gives you a job and you realize OK, I don’t want to do that,” said Stuart Wells, director of conservation and science at the Phoenix Zoo. “This offers an opportunity because of what we do — we do fieldwork, we do interpretive, we do experimental design and we do husbandry. So, it gives students a chance to try those out — win, lose or draw — to get an idea where their interests are.” 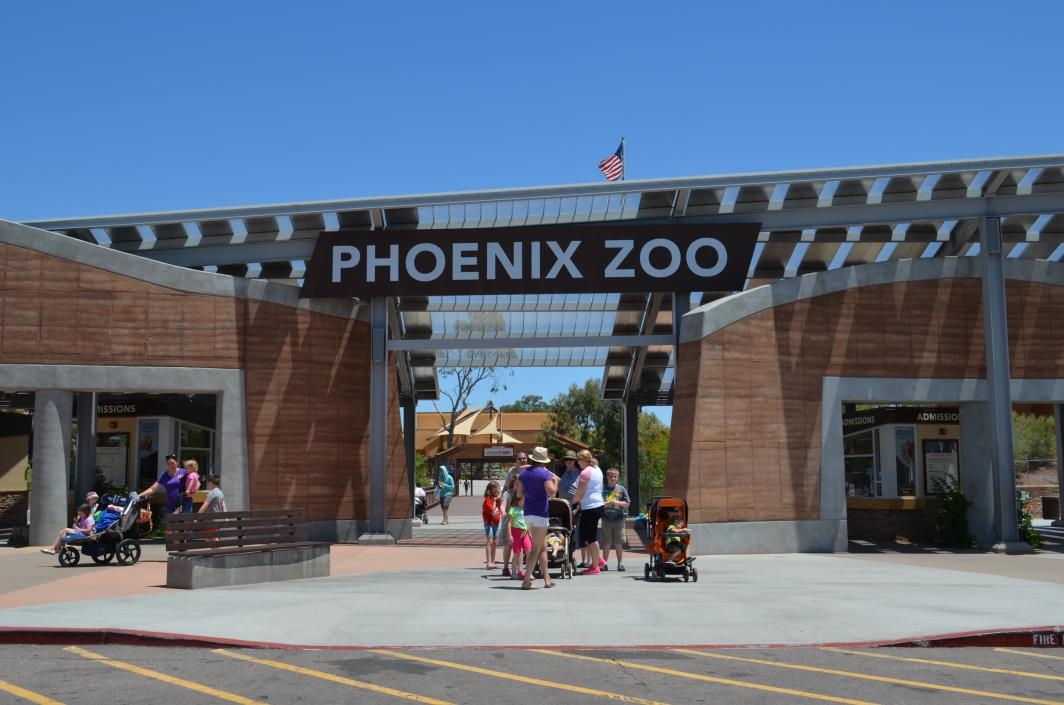 The Phoenix Zoo operates its internships in loops, such that student interns get to try their hand at all aspects of conservation science: animal husbandry, lab experiments and fieldwork. 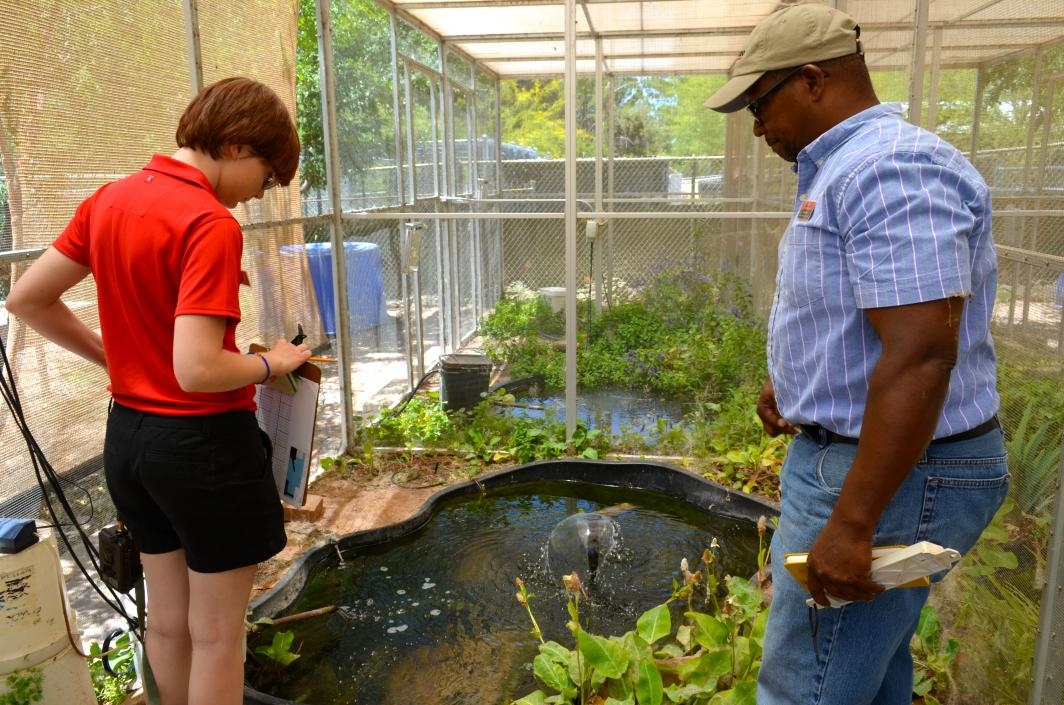 Spenser Babb-Biernacki and Stuart Wells discuss the health of animals in the Phoenix Zoo’s conservation program, which focuses its efforts on nine local species from the tiny, 3-millimeter Springsnail to mammals including the Mount Graham squirrel.

The Phoenix Zoo–Arizona Center for Nature Conservation has been officially open since 2007; however, it began focusing on endangered or threatened species more than a decade before that with the hopes of reintroducing them to the wild. The Phoenix Zoo was one of three facilities approached in the early 1990s to help breed blackfooted ferrets, believed to be extinct in the wild in the 1980s. On the heels of that successful effort — which has resulted in more than 100 ferrets being released back into the wild — the zoo began working with other declining local species.

Wells said that observing local species in a captive setting can be very informative because researchers can learn things about the animals that are difficult to ascertain in the wild, such as how fast they grow, when they reach reproductive age and when they reproduce. For example, until recently, no one knew that the Mount Graham squirrel was only receptive to breeding a mere four hours out of each year. Because of the zoo’s research on captive squirrels, researchers now know when that is and can include that critical information in any conservation plan for areas in which the squirrel is found.

Babb-Biernacki discovered firsthand how valuable zoo research could be through her own project on the narrow-headed gartersnake. Because of the zoo’s research, students have learned that a species thought to be primarily aquatic because it eats fish actually spends very little of its time in the water. In fact, it really only enters the water to hunt.

Babb-Biernacki is hoping to learn even more about this elusive study organism. Her project involves measuring growth rates in neonates and studying differences in behavior in neonates and adults of reproductive age — research that has never been done before on this species.

“Not a lot of research has been done on them because it’s not easy to follow a snake around and see where it goes and what it does,” Babb-Biernacki said. “They’re very cryptic. You don’t want to follow a snake for a year. Now, they’re outside of the wild and you can actually monitor their behavior and track how fast they grow.

“We’re doing things that have never been done before. It’s really nerve-racking, but also very exciting.”

This internship has provided Babb-Biernacki with an exciting and valuable research experience — all made possible through this conservation-focused partnership.

“At ASU, we strive to provide undergraduates with unique opportunities to gain hands-on research experience with scientists who are at the forefront of their fields,” said Kevin McGraw, director of the School of Life Sciences Undergraduate Research (SOLUR) Program. “Our partnership with the Phoenix Zoo is special because they specifically seek out our students and teach them a variety of skills in conservation research that they wouldn’t gain anywhere else.” 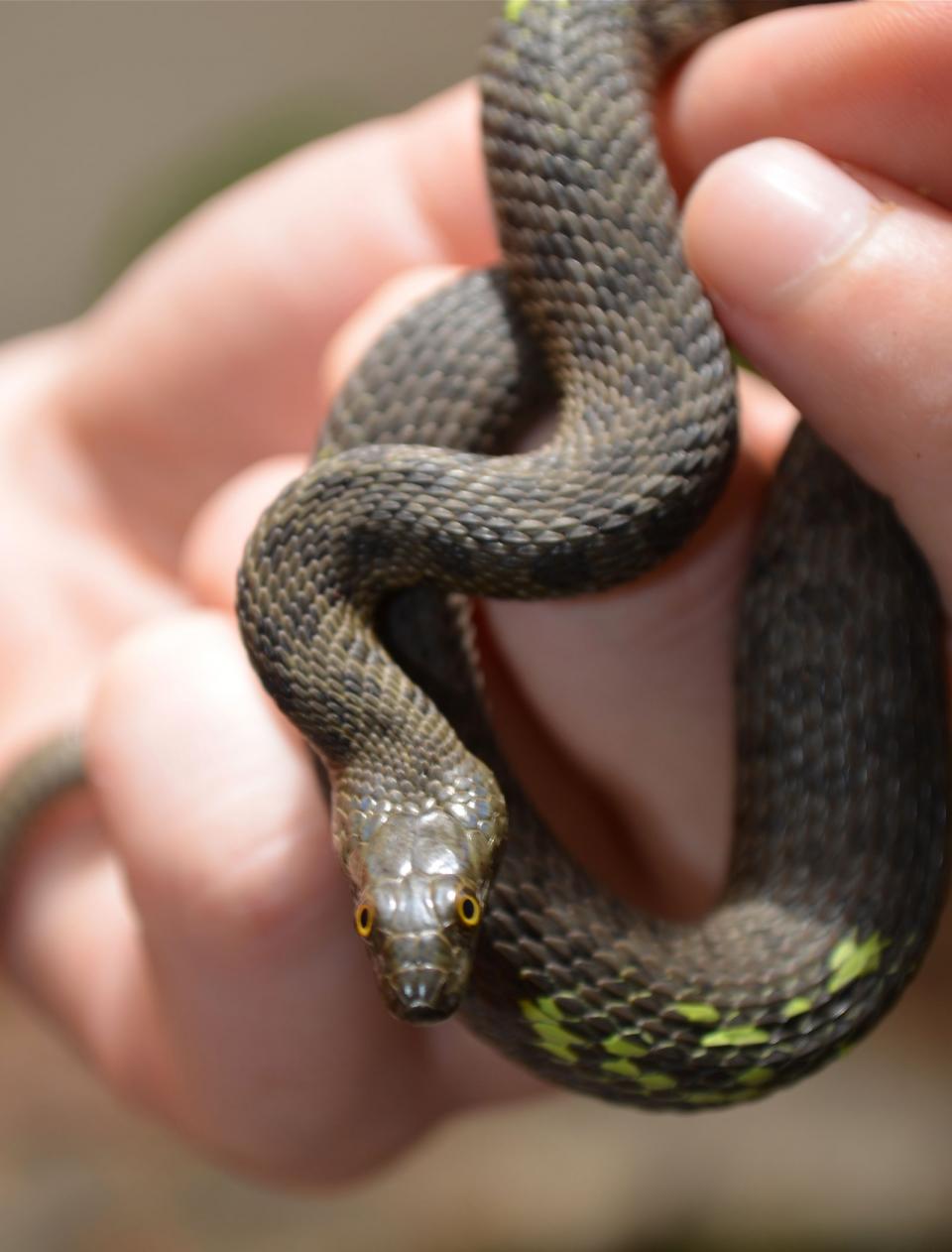 The Phoenix Zoo began targeting ASU undergraduates in 2009, and now it provides nine internships each year, three of them paid. Wells designed an internship program with four goals in mind: to develop understanding of animal husbandry, which can help create programs for release; to understand basic research concepts; to understand interaction between research and education; and to get students involved with work being done at the zoo’s conservation center.

The center also works with organizations such as Arizona Game and Fish and the U.S. Fish and Wildlife Service, where students studying conservation may want to apply for jobs after graduation. In addition to learning new skills, student interns can make valuable connections that may further their post-ASU career.

“When I earned my undergrad, I was thinking I wanted to go into biology, but I didn’t have a good sense of what that application was,” Wells said. “I think these kinds of programs, especially with these focal points, give an insight to people going into school as to what their interests are.”

After graduation, Babb-Biernacki plans to continue pursuing a career in conservation science and would like to work in a conservation center similar to the one where she spent her summer, as long as, like the Phoenix Zoo, there is a fieldwork component.

“I’ve wanted to work in a conservation center because of the variety of things you get to do. You get to do fieldwork, and then you get to come back and do things in a more lab-like environment,” Babb-Biernacki said. “But I love fieldwork. I’ve learned that through the course of my education. I love going out and getting my hands dirty in the field.”

As an undergraduate, Babb-Biernacki fell in love with conservation through courses offered at the School of Life Sciences. She remembers learning about the black-footed ferret reintroduction program during a lecture. She wrote a paper about the conservation of the Mount Graham squirrel for one of her classes. And then coincidentally, she got to study those animals herself.

“Doing internships validates everything that you learn,” Babb-Biernacki said. “I actually get to go and see how the things I’ve been learning about are applied and see what researchers are doing. They really speak to one another: education and experience. It’s so much more than hearing about something in a classroom; it’s actually becoming a part of what you’ve been learning.”

Written by Melinda Weaver. This story originally appeared in SOLS magazine. Read the current and previous issues at sols.asu.edu/news-events/sols-magazine.