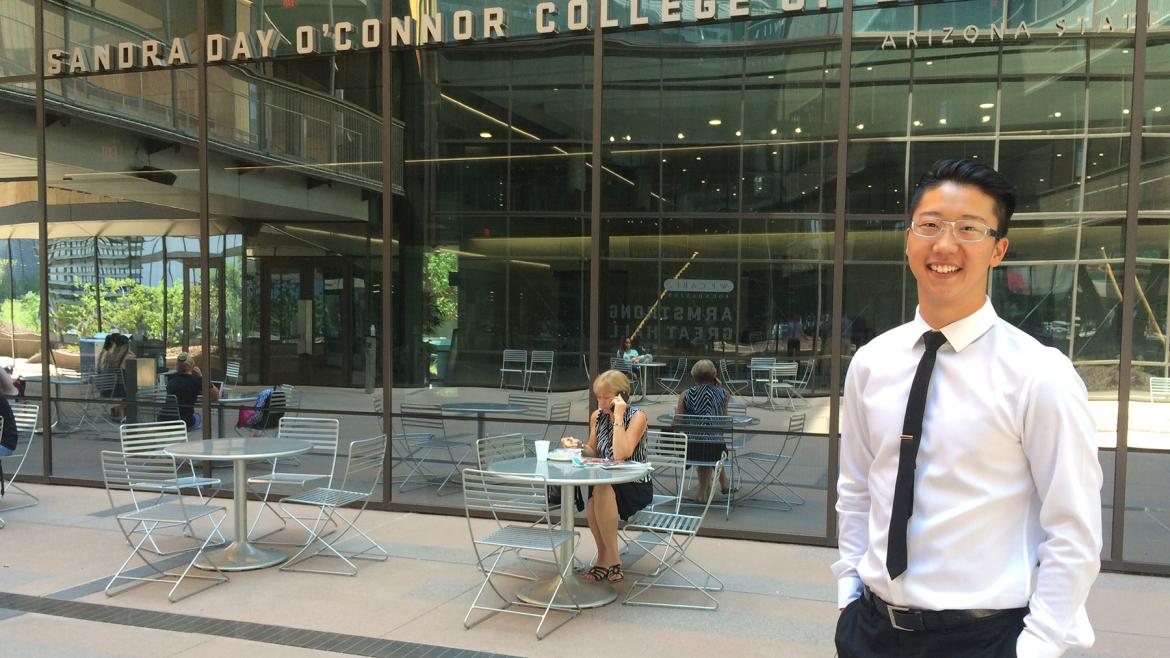 Thomas Kim is living the American dream. He almost didn’t.

Kim is a second-year law student at the Sandra Day O‘Connor College of Law at Arizona State University. As a high school senior living in Portland, Oregon, he was planning to work at a Japanese restaurant following high school. He didn’t see any other options. His family had legally emigrated from Korea a few years before but had since lost their immigration status. As an undocumented immigrant, Kim couldn’t afford tuition.

A friend encouraged him to apply to Pacific Lutheran University in Tacoma, Washington. He qualified for merit scholarships that covered the cost of tuition at the private university. He also worked 30 hours a week to pay for living expenses and graduated with bachelor’s degrees in economics and psychology.

That’s why, as a Spirit of Service Scholar, Kim plans to create an organization to help mentor students and identify scholarships for students who don’t have immigration status and who otherwise couldn’t afford to go to college or get an advanced degree.

The Spirit of Service Scholars program was established six years ago by the College of Public Service and Community Solutions on the Downtown Phoenix campus. It’s overseen by the Congressman Ed Pastor Center for Politics and Public Service. Each year, more than a dozen students who have a track record of working on community issues are selected to serve as scholars.

“About 10 seconds into his interview, I think we all knew Thomas had to be part of the next Spirit of Service scholars cohort,” said Alberto Olivas, executive director of the Pastor Center. “He spoke so passionately about wanting to study law in order to use it to work effectively on issues affecting immigrants. He’s just a very inspiring young man, and truly embodies the public service orientation we’re looking to groom and develop in this program.”

For Kim, being a Spirit of Service Scholar will provide the tools to accomplish his goals.

“We’re not just some students spending time in theory la-la land,” Kim said. “We’re actually coming up with an action plan. And with all the resources that this program provides, we’re going to make a dent.”

Scholars learn about leadership and subject matters during weekend seminars and special events. They are also assigned to work with groups of students from local high schools on community or school-based projects.

When Kim was asked whom he would like for his mentor, he replied “Rebecca White Berch.” He had met the retired chief justice of the Arizona Supreme Court soon after he started law school.

“And she has kindly agreed to be my mentor for the year.”

This, despite taking a prized item away from the chief justice at a fundraising auction last year — Kim had outbid White Berch for a dish of baklava, a Greek dessert.

“After I won, her clerk, who is a past scholar, comes over to me and she says, ‘Thomas, what in the world are you doing?’” Kim recalled. “‘Why did you bid against her? You know that was for her daughter and son-in-law from Idaho who are vegans.’”

“Can I stop by your chamber and drop off this baklava?” Kim asked. “I don’t care about the cost, it was for a good cause.”

White Berch told him her family had already departed, but the gesture was appreciated.