Sarah Crawford was initially terrified to leave her community of Peever, South Dakota, to attend a two-month internship in Washington, D.C. Little did she know that those two months would eventually turn into five years and ultimately lead her to attend the Sandra Day O’Connor College of Law at Arizona State University and participate in the Indian Legal Program.

Crawford, from the Sisseton-Wahpeton Oyate community in northeastern South Dakota, is the first recipient of the Fort McDowell Yavapai Nation Law Scholarship that was started earlier this year as part of a $1.2 million endowment to the ASU Indian Legal Program. The endowment from the Fort McDowell Yavapai Nation will support scholarships, grants and other programs benefitting current and prospective Native American students like Crawford at ASU Law. 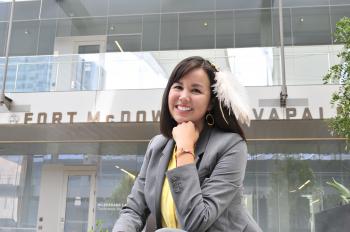 Sarah Crawford, from the Sisseton-Wahpeton Oyate community in northeastern South Dakota, is the first recipient of the Fort McDowell Yavapai Nation Law Scholarship that was started earlier this year as part of a $1.2 million endowment to the ASU Indian Legal Program. Photo by Danielle Williams Download Full Image

“The Fort McDowell Yavapai Nation has been a leader in Arizona for Native voting rights, gaming issues and the protection of tribal sovereignty. It is only fitting that Sarah be the first Fort McDowell Yavapai Nation Scholar as these are our interests as well,” said Kate Rosier, executive director of the Indian Legal Program. “Sarah is a great student and a natural leader. We are proud to have her at ASU Law and as part of the Indian Legal Program family.”

ASU Law and the Indian Legal Program have hundreds of graduates who are practicing in the Indian law field and represent tribes from across the country.

Crawford said it was after doing a yearlong undergraduate research project involving policy and Indian Country that, specifically the Indian Child Welfare Act, a lightbulb went on and she realized the importance that policy work could have.

“For the longest time in my undergrad I didn’t know what to do; I kept bouncing back and forth. I knew I wanted to help out the underserved — that was always my focus. I just didn’t know how to put that into a career, and it wasn’t until I looked into policy work that I realized that policy really impacts change and can create a domino effect,” said Crawford.

After graduating from Minnesota State University-Moorhead with a bachelor’s degree in psychology and a minor in business management and political science, she was selected for the Native American Congressional Internship with the Udall Foundation. Every year, the Udall Foundation places Native American students in internships throughout the U.S. Congress and federal agencies.

Crawford was assigned to the office of South Dakota’s U.S. Sen. Tim Johnson. She felt it was the right choice given he was not only the senator from her home state but he also served on the Senate Committee on Indian Affairs.

“To this day I remember that work and the best part was being able to travel back home to South Dakota and work one-on-one with community members, and being able to listen to the issues that were impacting tribes and tribal members on the ground,” said Crawford.

She loved the work so much, she decided to continue working on Capitol Hill as Johnson’s congressional staffer for more than three years after her internship ended. She worked her way up the ranks and eventually became a legislative associate. She became the point person within the office to work on Indian Affairs legislation, specifically working on legislation that would provide tribal tax parity, ensuring program funding for Native languages, and addressing the quality of education in Indian Country.

Once Johnson decided to retire, Crawford was intent on staying in Washington and joined the staff of the National Indian Gaming Commission, a federal regulatory agency set up to monitor Indian gaming across the U.S. It was there she got the first inkling she wanted to pursue law.

“I got to see what they were doing, that hands-on work on policy that I thought, this was it. This is what I really want to do,” said Crawford.

After meeting ASU alumni from the Indian Legal Program and through the encouragement of her co-workers at the National Indian Gaming Commission, she saw the real possibility of going into law and utilizing her policy and legislative background in a different way. She then applied to ASU and was accepted earlier this year. She is impressed with the reputation of the ASU Indian Legal Program and faculty.

“The professors that they’ve garnered here are the top of the top, and the opportunity to work with these professors that are engaging with the community was another draw for me,” said Crawford.

She says that faculty engagement with Native communities as tribal judges, Native American voting rights advocates and as advisers, shows their commitment to their profession and to Indian law.

She says staying connected to tribal communities by helping solve real-world problems is something she really appreciates and wants to continue pursuing as an ASU Law student and graduate of the Indian Legal Program.

Sun Devil Football continues the 2016 season this weekend as it returns home for its Pac-12 Conference opener on Saturday against the California Golden Bears in Tempe, Ariz. ... Sun Devil Football continues the 2016 season this weekend as it returns home for its Pac-12 Conference opener on Saturday against the California Golden Bears in Tempe, Ariz.