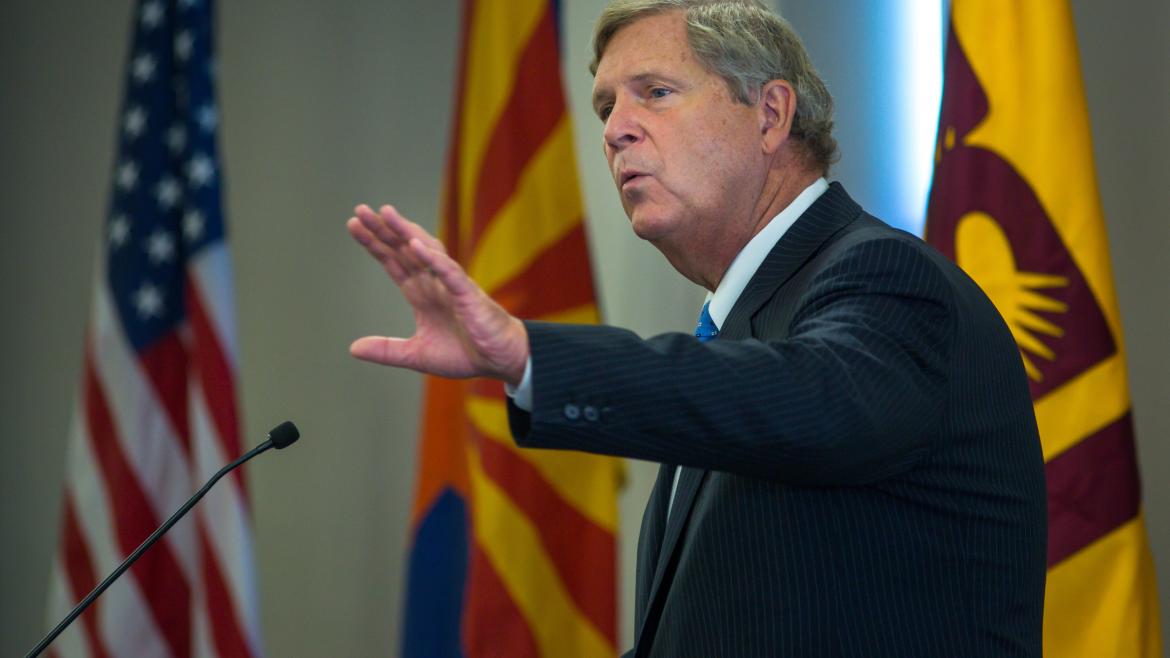 US secretary of agriculture tells ASU audience that research, partnerships are key

Food security is vital to America’s freedom, and protecting farmers from the effects of climate change will require the collaboration of universities, the U.S. secretary of agriculture said.

Tom Vilsack, who has been the nation’s ag chief for the entirety of the Obama administration, spoke at Arizona State University on Wednesday about the impact of climate change on farming and ranching. The Fall Forum event was sponsored by the Julie Ann Wrigley Global Institute of Sustainability at ASU.

“In my lifetime, we’ve seen a 170 percent increase in agricultural productivity,” Vilsack said, noting that Americans spend about 10 percent of their paychecks on food, compared with 25 to 50 percent in other countries.

“That’s why it’s important to talk about the future that will exist with a changing climate.”

Besides drought, other possible effects of climate change could be increases in pests and livestock diseases, more frequent and severe storms and more firesThe U.S. Forest Service, overseen by the USDA, has seen the money it spends on fire suppression mushroom from 16 percent of its budget a decade ago to 56 percent now, which means less money for restoration and resiliency efforts in forests, Vilsack said..

Vilsack said the Obama administration has charged universities with doing more research on climate and water issues as well as specific solutions such as grazing patterns and drought-resistant crops.

“Arizona State is working with our ‘climate hub’ in New Mexico, looking at every aspect of climate change and doing assessments” to give technical support to farmers, ranchers and forest landowners, he said.

The Julie Ann Wrigley Global Institute of Sustainability has several projects that address climate change and agriculture, including the “One Million Tons” project, which is creating data on the use of adaptive multi-paddock grazing for carbon sequestration, water retention and plant and microbial biodiversity. That project also includes outreach to ranchers and farmers and agricultural policy development. 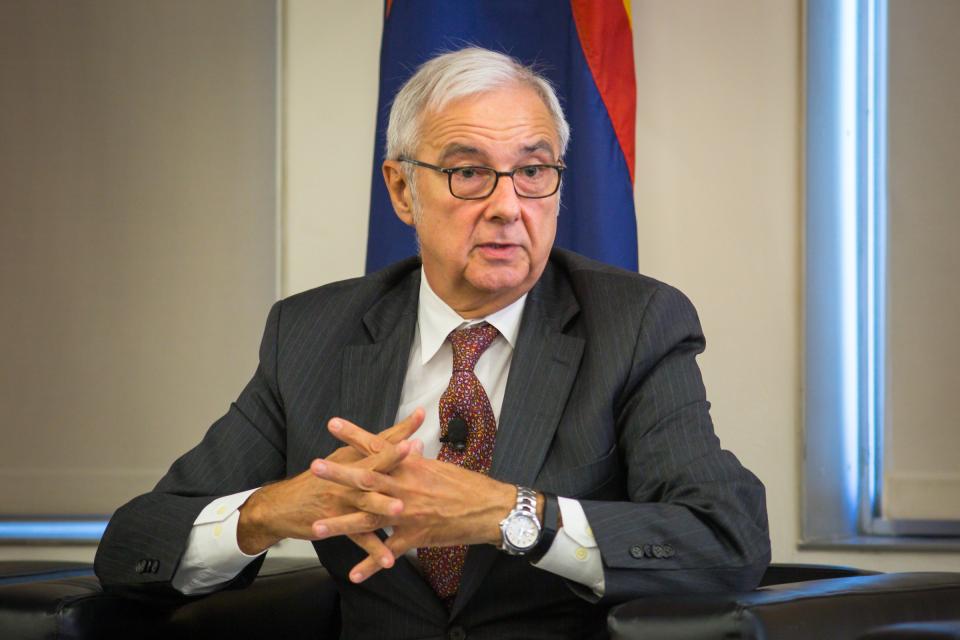 Osvaldo Sala, a professor in the School of Sustainability, said during the panel discussion that universities should help find evidence-based solutions. Photo by Charlie Leight/ASU Now

After his speech, Vilsack moderated a forum on sustainability that focused on the importance of collaboration among governments, corporations, conservationists and universities. The panel featured Osvaldo Sala, the Foundation Professor and Julie A. Wrigley Chair at ASU, where he contributes to both the School of Life Sciences and the School of Sustainability. His research has predicted that climate change will result in big variations from year to year, with very dry periods alternating with very wet periods.

Sala said that climate researchers used to think their stakeholders were primarily ranchers, but now they realize their work is important to people who are interested in conservation, recreation, job creation and other issues.

“We hope the universities would provide the knowledge to shift from the emotion-driven confrontations that we’re seeing in the news every day to an evidence-based negotiation,” he said, citing the ongoing conflict over the Dakota Access pipeline in North Dakota, which is conflicting the interests of Native Americans, conservationists, an oil company and a local community. Mark Killian, director of the Arizona Department of Agriculture, said that universities have made huge contributions to the advancement of agriculture. Photo by Charlie Leight/ASU Now

Mark KillianKillian also is a former member of the Board of Regents, a state legislator and director of the Arizona Department of Revenue. His family has been in farming and ranching in Arizona for more than 100 years. He graduated from ASU in 1981., director of the Arizona Department of Agriculture, said that the knowledge produced at universities has helped keep America free.

“That creation of knowledge on the ground has transformed American agriculture from subsistence levels to the greatest producer in the world today. To my mind, agriculture is the most important strategic industry we have.

“The countries that can feed themselves are free.”

Killian said that universities have created improvements in everything from water-saving irrigation nozzles to crop genetics. 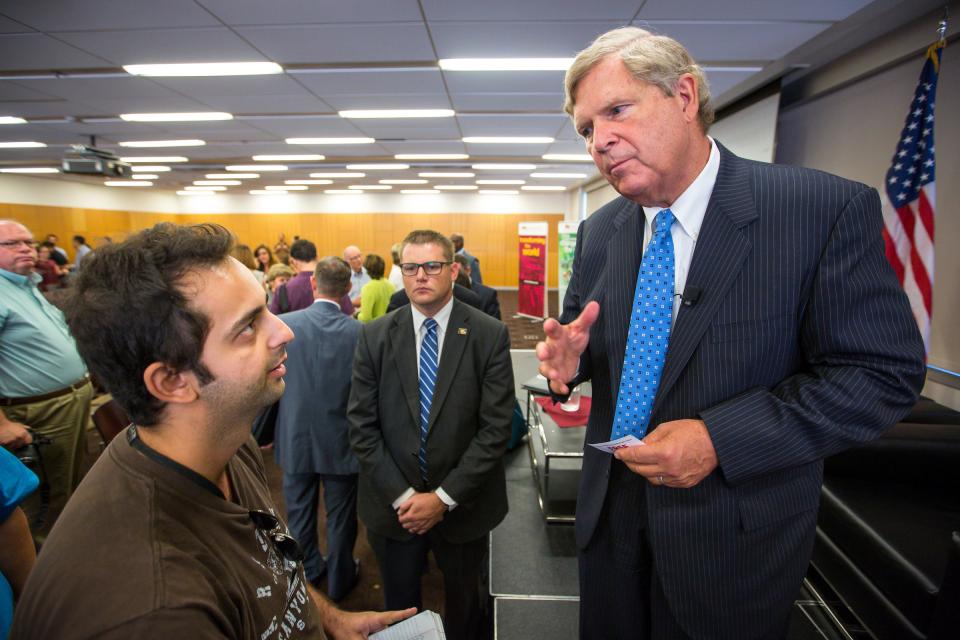 Vilsack said that young people today have the opportunity to redefine the American economy.

“We talk about bringing manufacturing back. We have the capacity to have a plant-based economy. We already have a $360 billion industry of making chemicals and fibers that are plant based. There’s unlimited possibility to convert an economy that has for too long been dependent on fossil fuels.”

Killian said that the challenge for today’s university students is to avoid partisanship and work together.

“We have people who go to bed hungry. How can anyone in America today go to bed hungry? Feeding people, from a moral standpoint, is one of the most important things we do in the world.

“If you focus on that, solutions will come together quickly.”

A cluster of education groups and nonprofits are working to create momentum for a day to celebrate the advance of computer classes into the mainstream, carving out Sept. 15 as “National Online Learning Day.”The first push consists primarily of a social media campaign supported by parenting magazines and organizations that back charter education and homeschools, touting the “convenience and p... 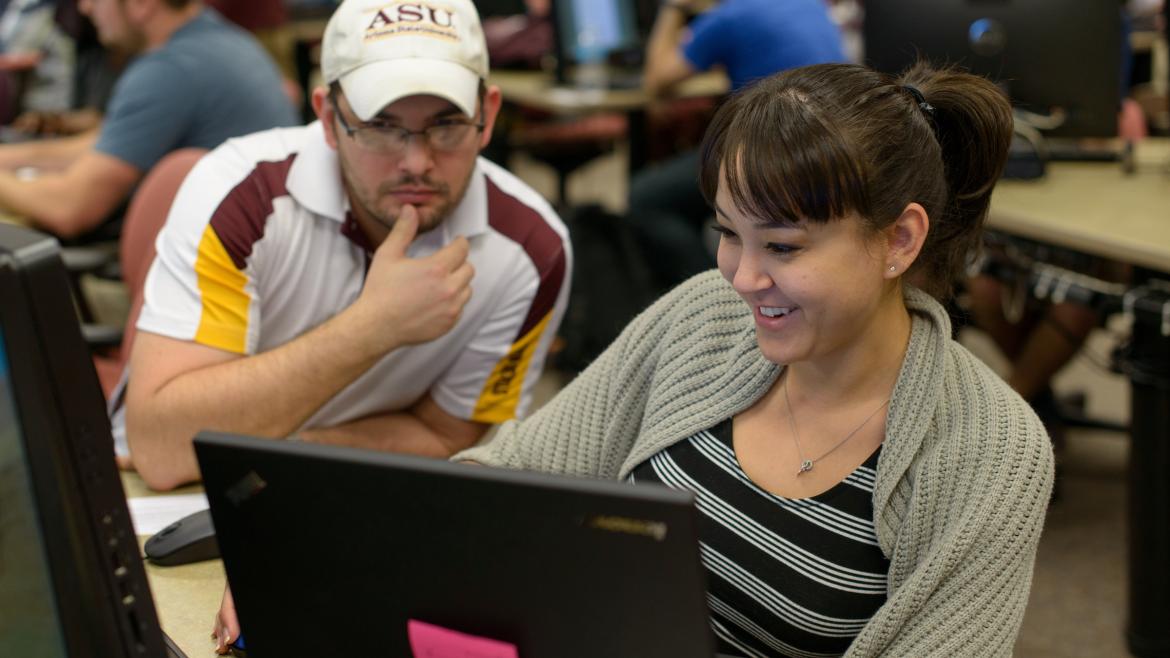 A cluster of education groups and nonprofits are working to create momentum for a day to celebrate the advance of computer classes into the mainstream, carving out Sept. 15 as “National Online Learning Day.”

The first push consists primarily of a social media campaign supported by parenting magazines and organizations that back charter education and homeschools, touting the “convenience and personalization for every learner” that online classes provide.

Arizona State University isn’t connected to the nascent effort, but it’s an opportunity to examine and highlight how the nation’s most innovative school has played a pioneering role in bringing accredited online classes to higher education.

ASU has been named the nation’s most innovative school for the second consecutive year — ahead of Nos. 2 and 3 Stanford and MIT — and university officials say advances in online learning factored into the ranking from U.S. News & World Report.

Starting with the question “what if you could earn your degree from a world-renowned university, at any time, from anywhere online?” ASU has mapped out over 100 degree programs available completely on the web.

ASU President Michael Crow has said the programs remove the barriers of location and time an expand “access to the educational opportunities of a great research university and all of the faculty that we have assembled.”

When the Global Freshman Academy launched in 2015 with Intro to Solar Systems Astronomy, more than 12,000 students from more than 160 nations logged in.

The academy — a partnership with edX, which provides free internet classes — has since expanded giving students anywhere the opportunity to take college-level courses. There are no applications or transcripts required and enrollment is instant. Also, students don’t have to pay for credit until they’re sure they’ll pass the course.

It’s an initiative aimed at access. Phil Regier, head of ASU’s education innovation efforts, said at launch that the academy represented a “new model, showing that a university does not have to be marked by exclusivity.”

ASU has partnered with Starbuck to provide 100 percent tuition reimbursement to each one of the coffee-giant’s eligible U.S. employees.

Thousands of Starbucks workers have enrolled in the program since it launched last year. The company said it planned to invest $250 million to help at least 25,000 employees graduate by 2025.

From the university’s Knowledge Enterprise Development, KEDtalks are billed as "conversations for the curious," which create opportunities for university experts to share ideas through discussions with a wider audience.

The planned series begins with Sethuraman Panchanathan, executive vice president of ASU’s Knowledge Enterprise Development wing and chief research and innovation officer, defining “knowledge enterprise” as the production of “people, ideas and things.” He then expands on the impact this model of thinking has created in areas from education to cybersecurity.