It's uncanny. Dark finger-like streaks form on dozens of Martian crater rims and hillsides as local spring warms into summer. The streaks lengthen down the slopes until summer's height, then stop growing and fade as fall comes on.

What causes these seasonal streaks has been a mystery since they were first discovered in 2011. 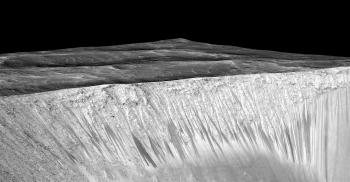 Thin, dark streaks appear every Martian summer and crawl down the inside rim of Garni Crater and numerous other hillsides on Mars. Scientists using a Mars-orbiting instrument operated at ASU have just discovered the streaks are not caused by flows of water, as scientists have thought. Instead the streaks are extremely dry, and their cause remains unknown. Photo by NASA/JPL-Caltech/University of Arizona Download Full Image

Most scientists have assumed the seasonal streaks — known as recurring slope lineae, or RSLs for short — form as summer temperatures melt buried ice near the tops of the slopes, and the water flows downhill making dark streaks. Later in the year, as temperatures drop, the flow halts and the dark streaks fade as dust falls out of the atmosphere to cover them. Supporting this idea were observations that the streaks contain hydrated salts.

Now a discovery made using an instrument operated at Arizona State University's School of Earth and Space Exploration throws strong doubt on this "wet streak" model for RSLs.

Christopher Edwards, of Northern Arizona University in Flagstaff, and Sylvain Piqueux, of NASA's Jet Propulsion Laboratory in Pasadena, California, used the Thermal Emission Imaging System (THEMIS) on NASA's Mars Odyssey orbiter to measure temperatures of a large group of RSLs in a Martian crater. Their work, published in the journal Geophysical Research Letters, found that the group of dark RSLs contained essentially no water. (Both Edwards and Piqueux were PhD graduate students at ASU.)

"We used a very sensitive technique to quantify the amount of water associated with these features," said Edwards. "The results are consistent with no moisture at all and set an upper limit at 3 percent water."

Edwards and Piqueux analyzed several Mars years of THEMIS infrared observations of RSLs within the large Valles Marineris canyon. The area has many RSL features close together in parts of the study region. The researchers compared nighttime temperatures of patches of ground — one covered to about 44 percent by RSLs, and the other on nearby slopes having no RSLs.

They found no detectable temperature difference, even during seasons when the RSLs in the crater were actively growing.

The observations have an error margin of 1 degree Celsius, or 1.8 degrees Fahrenheit. Calculating the maximum possible water that could be concealed in that temperature difference led them to the 3 percent upper limit for water.

"These results show that THEMIS has a unique way of measuring the water content of RSLs," said Philip Christensen, of ASU's School of Earth and Space Exploration. He is the designer and principal investigator for the THEMIS instrument.

"Water in the soil has a strong effect on the surface temperature of that soil. So measuring the temperature accurately can put tight constraints on the quantity of water the soil holds," he explains.

Edwards notes that some type of water-related activity at the uphill end still might be a factor in triggering RSLs. "But the darkness of the ground is not associated with large amounts of water, either liquid or frozen," he said. "Totally dry mechanisms for explaining RSLs should not be ruled out." 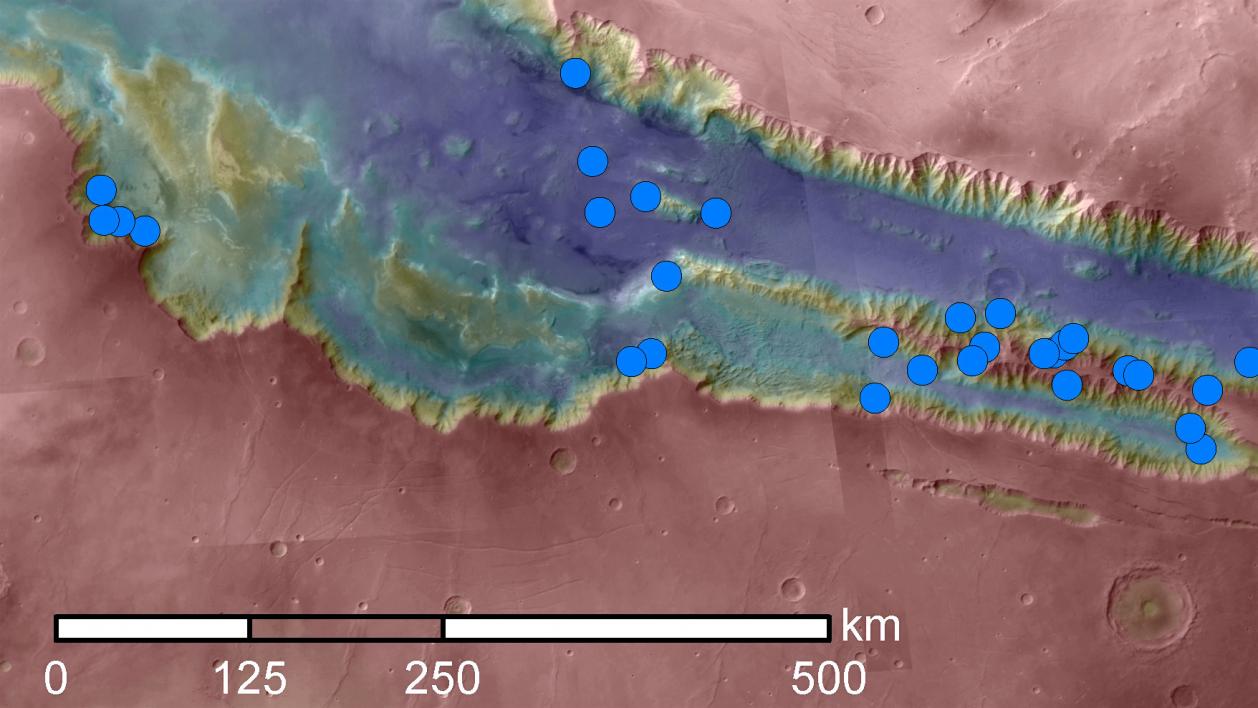 Blue dots mark locations within the Valles Marineris canyon network where seasonal dark streaks occur. This area has the highest density of these streaks on Mars.

Photo by NASA/JPL-Caltech/University of Arizona 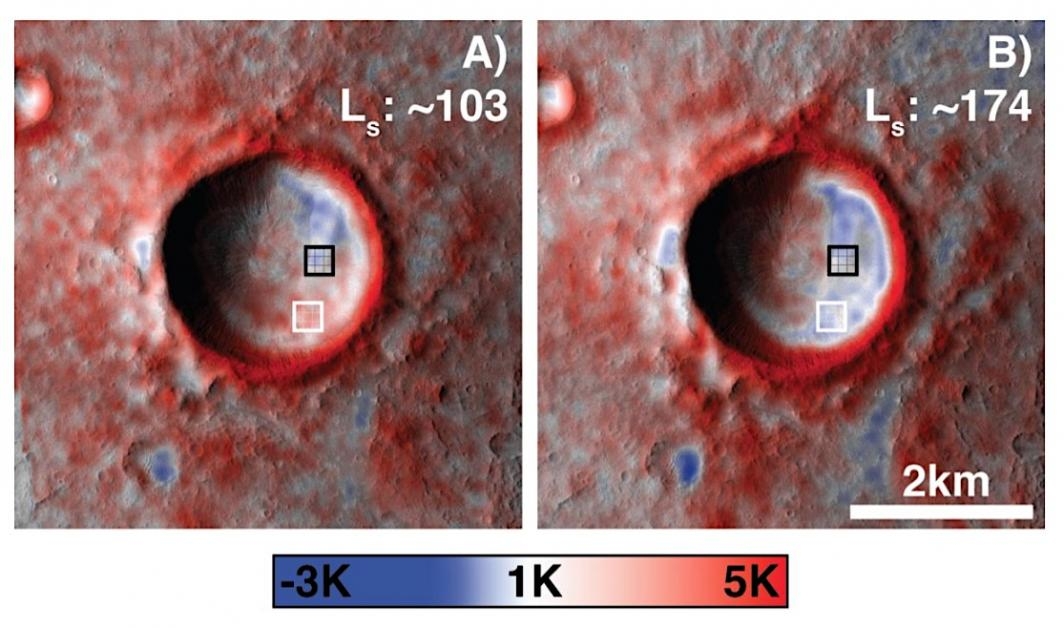 THEMIS temperatures at Garni Crater show a seasonal change between the RSL-rich white square and the non-RSL black square is at most 1 degree Kelvin (1.8 degree Fahrenheit). The left image is in summer; the right is at the start of fall.

Water won't flow at Martian temperatures, even in sun-facing slopes in summer, unless it contains some salt: a brine, in other words. Research published in 2015 found hydrated salts in the surface composition of RSL sites, and these salts increased during the season when streaks are active. Hydrated salts hold water molecules affecting the crystalline structure of the salt.

"Our findings are consistent with the presence of hydrated salts, because you can have hydrated salts without having enough to affect the measured seasonal temperature," Edwards said. "Salts can become hydrated by pulling water vapor from the atmosphere, with no need for an underground source of the water."

But the scientists point out that if RSLs were seasonal flows of briny water followed by evaporation, there would be an annual buildup of crust-forming salt, and this should affect temperature properties. So the lack of a temperature difference between RSL slopes and non-RSL slopes is evidence against evaporating brines.

Another theory for RSLs has proposed that they are mini-landslides of dry material with different thermal properties than the pre-existing slope material. Such might be the case with annual avalanches of powdery dust that accumulates from dusty air. But again the lack of a temperature difference argues against this.

In the end, the mechanism that causes RSLs remains unknown. But Christensen said the discovery that RSLs are extremely dry has wider implications besides pointing the way forward for scientists as they try to understand how these features form, grow and fade each Mars year.

"By constraining the amount of water they contain — and by placing a very low upper limit on it — the THEMIS results help scientists determine how likely these seasonal streaks are as habitats for possible Mars life," he explained.

"Because RSLs are so dry," Christensen continued, "that makes them much less likely to be habitats for life."

Although this may be disappointing to researchers, he said, "It means missions to Mars designed to find biological traces and other markers for life could remove RSL sites from their target list."

Traveling to Washington, D.C., gave A.J. Simmons, a doctoral candidate at the School of Politics and Global Studies, the opportunity to interview individuals with multiple perspectives on human-rights violations during times of war and the impact of prosecutions for those violations.Simmons’ dissertation delves into causes and consequences of domestic accountability for alleged human-rights viol...

Traveling to Washington, D.C., gave A.J. Simmons, a doctoral candidate at the School of Politics and Global Studies, the opportunity to interview individuals with multiple perspectives on human-rights violations during times of war and the impact of prosecutions for those violations.

Simmons’ dissertation delves into causes and consequences of domestic accountability for alleged human-rights violations by U.S. armed forces. To do this, he recently spent two weeks in Washington, where he interviewed policy makers, civilians, military officials and other key individuals about their experiences with accountability in order to more thoroughly explore his theory. 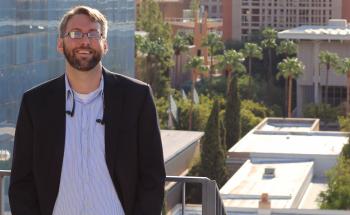 A.J. Simmons, who works out of the School of Politics and Global Studies on the sixth floor of Coor Hall. Download Full Image

While in the nation’s capital, Simmons worked with two ASU partners, New America and the McCain Institute. Both think tanks were instrumental to his project not only hosting him but also helping him set up several interviews while there.

Initially, Simmons had concerns that his interviewees may take his project the wrong way. He did not want to come across as if he were chastising the alleged human-rights violations of American service members. Instead he found his interviewees to be deeply interested in his project.

“I had one former officer in the American military go as far as to state that given the topic, my dissertation should be required reading at American military colleges once it is complete. To him, understanding the causes and consequences of accountability for alleged violations of armed service members is important.”

Reflecting on his time in Washington, Simmons said, “Almost every interview I conducted was amazing. I had the opportunity to talk with people I had only ever read about or saw interviewed on TV. Not only did I get to talk with them, I had their undivided attention for the entire interview. Each person I spoke with treated myself and my research like it mattered, which was fantastic.”

According to Simmons, the benefit of this direct contact with key decision makers makes his project even stronger and his arguments more compelling.

“The interviews shed a lot of different light on parts of my project, demonstrating that my expectations were correct, but with some additional twists I did not anticipate and couldn’t have guessed from afar. I’m excited to share these twists with my committee, other academics and policy makers.”

Although Simmons is still conducting several interviews, when his work is completed he hopes that his dissertation can shed some light on the decision making process that government leaders go through in times of conflict. He also hopes this work could help service members and policy makers better understand the consequences of violating human rights and laws during conflict.

“I sincerely hope that my project can help them discern the consequences of their decisions during these situations and gain a better understanding of outcomes they may face or contribute to.”