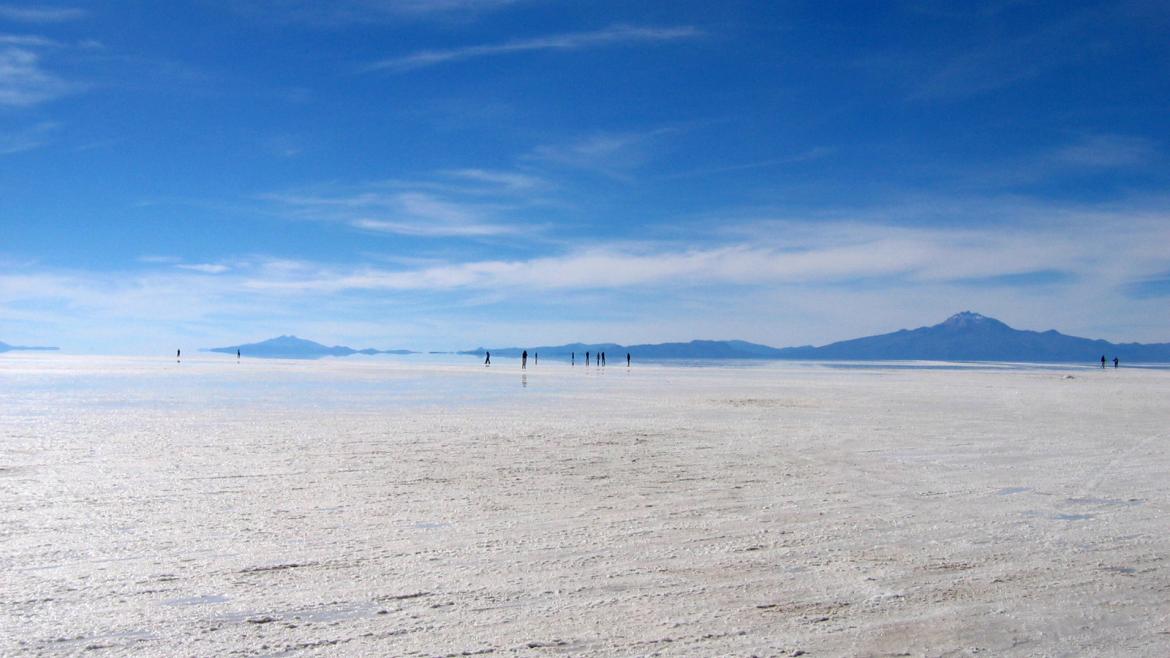 Admit it. It can be fun to be bad.

Blowing up a planet to test a weapon. Stealing candy from babies. Feeding your enemies alive to your dogs.

There’s a reason why villains laugh so much, while heroes rarely do.

As a baddie in director Werner Herzog’s latest feature, Arizona State University cosmologist and theoretical physicist Lawrence Krauss brings his jack-o’-lantern grin to the big screen. “Salt and Fire” has its North American premiere at the Toronto International Film Festival in September. 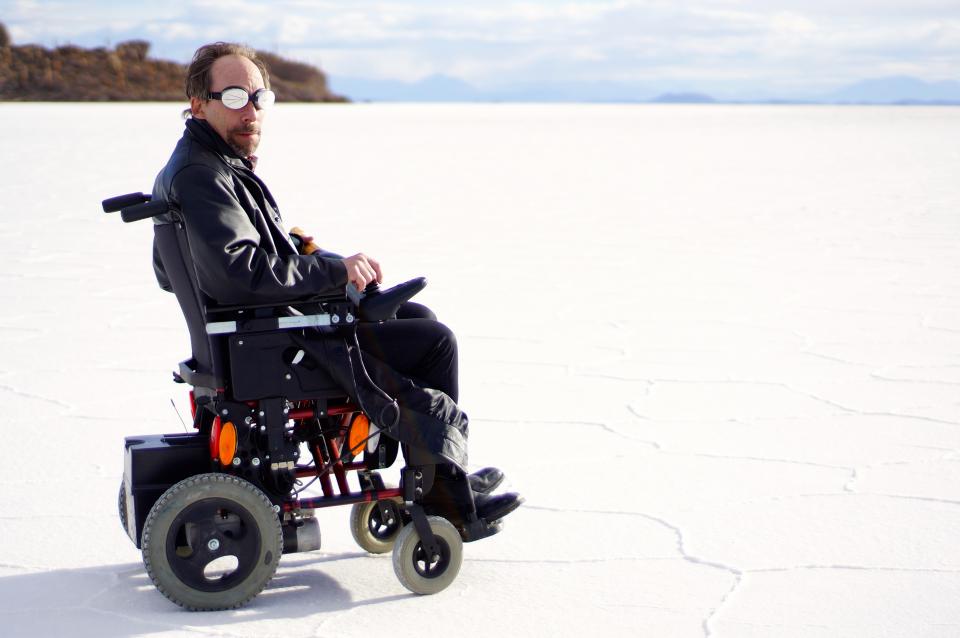 ASU professor Lawrence Krauss is actually a really good guy. But he doesn’t play one in the movies. Photo by Lena Herzog

Described as an “ecological thriller,” the movie is about a clash between a scientist and a corporate CEO over an ecological disaster in South America. When a volcano begins to show signs of erupting, they unite to avoid a disaster. It takes place on the vast Bolivian salt flats (pictured above and at top of story).

Krauss dons huge goggles and glides about in an electric wheelchair in the film, giving him something of a Bondian look.

“I like to think of it as a cross between Dr. Strangelove and a Bondian villain, but I’m not as vicious as a Bond villain,” said Krauss, a professorKrauss is also part of the Department of Physics in the College of Liberal Arts and Sciences and director of the Origins Project, a university initiative created to explore humankind's most fundamental questions about our origins. in ASU’s School of Earth and Space Exploration. “You never really know; the viewer is kept wondering.”

His screen name is Krauss.

“Just Krauss,” he said. “In fact, Werner henceforth after the movie, has and will only refer to me as Krauss. ... When I read the screenplay, I thought that was just a placeholder for what my name would be.”

Krauss said he feels a bit guilty for two reasons. Herzog is acknowledged as one of the world’s greatest directors, with masterpieces like “Aguirre, the Wrath of God” and “Fitzcarraldo” to his name, as well as documentaries such as “Grizzly Man” and “Cave of Forgotten Dreams.” Hollywood professionals pine their whole lives to be in a Herzog movie.

“Second of all, to think he wrote the part and largely the screenplay with me in mind; how many people get a Werner Herzog role written specifically with them in mind?” Krauss said. “It’s a strange movie. This character is full of off-kilter lines. He views the world as a weird place, and his role is to mix things up.”

He described the character as the brains behind the scheme, a sidekick villain.

“I’m not the one making decisions, but I’m the one coming up with the plans, and implementing them,” Krauss said. “I have a series of henchmen.” 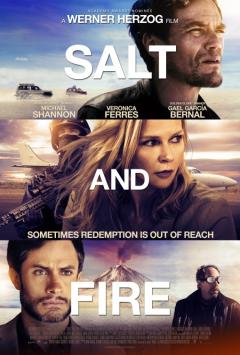 Krauss has known Herzog for a long time. They met when Krauss was a judge at Sundance Film Festival years ago, and they have collaborated on events throughout the years, including a few at ASU.

“For a long time he’s been saying, ‘I want you to be a villain in one of my movies,’ and I never thought it would happen,” Krauss said.

About two years Herzog mailed him the script.

“I thought I would be a walk-on line; then I saw I was in half the movie,” he said. ”I really still didn’t think it was going to happen, and then the German film company contacted me and arranged for us to film for a month in Bolivia. It was an amazing experience.”

Krauss was a little concerned, because he’d never acted before in a movie. He has been in movies and documentaries, but always portraying himself. In “Salt and Fire,” he appears with such seasoned actors as Michael Shannon and Gael Garcia Bernal.

“That’s their living, and I didn’t want to screw up things for them,” he said.

Krauss diligently learned his lines. Herzog told him not to overthink the acting. His biggest request was asking Krauss to come to Bolivia a few days early to get the hang of using the electric wheelchair.

“The acting part turned out to be fine. I liked it,” he said. “The real part of acting is listening to what people say and responding appropriately.”

Herzog’s shoots are famous for being miserable. (Filming “Aguirre” in the Peruvian jungle in 1972, a crew member sawed off his own foot after being bitten by a poisonous snake.) Making “Salt and Fire” was par for the course. The production was shot at 12,000 feet. Actors collapsed from the thin air during fight scenes and had to get oxygen. It was freezing cold on the salt flats. The first day, there was no hot water in the hotel.

Herzog is a lean director. The shoot took 16 days. He’s flexible. If the sky isn’t the exact same shade completing a scene, he doesn’t care about continuity.

“Werner is very serious on the set,” Krauss said. “There were some jokes I wanted to make, but I just didn’t have the courage. ... Bottom line, it was an amazing experience. It was a privilege and a pleasure, even when it was incredibly uncomfortable.”

Krauss got an offer to act in another movie, but doesn’t plan to decamp to Los Angeles. He will continue studying the beginning and end of the universe, and bringing the joys of science to the public.

“It was fun, but I couldn’t do it full time. I just don’t think it would satisfy me,” he said. “I don’t want to make it my day job. ... All of these things are learning experiences and adventures that I view as wonderful and I learn from them. It’s fascinating to see how things are done.”

Find out more about the Origins Project, including upcoming talks, at the group’s website. Top photo by Yee Wong/Freeimages.com

Stewart Fotheringham, Foundation Professor in the School of Geographical Sciences and Urban Planning at Arizona State University and leader in the realm of computational spatial science, has been elected to membership in a highly prestigious scholarly organization, Academia Europaea.Fotheringham is especially known for his work in spatial interaction modelling and local statistical analysis, and w...

Stewart Fotheringham, Foundation Professor in the School of Geographical Sciences and Urban Planning at Arizona State University and leader in the realm of computational spatial science, has been elected to membership in a highly prestigious scholarly organization, Academia Europaea.

Fotheringham is especially known for his work in spatial interaction modelling and local statistical analysis, and was one of the key developers of geographically weighted regression.  He applies these analytical techniques to build understanding in the realms of health, crime patterns, retailing and migration. 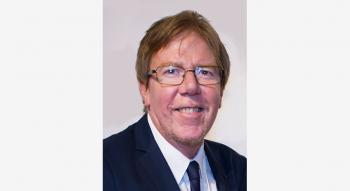 Academia Europaea is an international, non-governmental association of scientists and scholars from humanities, social and physical sciences, comparable to the National Academy of Sciences in the United States. Membership in the academy requires a rigorous review that includes peer group nomination, a thorough assessment based on the nominee’s scholarship in their chosen field, and a formal election by the academy’s members.

Although the academy’s approximately 3400 members include 70 whose research area is geography, Fotheringham is the first member whose expertise is identified as “Geographic Information Science.”

Fotheringham joined ASU in fall 2014. As a faculty member in the School of Geographical Sciences and Urban Planning, as well as senior sustainability scientist in the Julie Ann Wrigley Global Institute of Sustainability, he teaches undergraduate and graduate coursework in geographic information technologies and science, and advises several doctoral students.

“Working with Stewart is always professional, productive, and personal,” said doctoral advisee Taylor Oshan. “He’s treated me more like a colleague than as a student, which has been immensely helpful for fostering a positive academic experience.

“Stewart is extremely generous with his time and attention, always quick to provide useful feedback, and is supportive of me exploring and developing my own ideas.”

Already recognized internationally, Fotheringham is a member of the US National Academy of Sciences and a Fellow of the U.K.'s Academy of Social Sciences. He established both the Centre for GeoInformatics at the University of St Andrews in Scotland and the National Centre for Geocomputation in Ireland, and was awarded the first Science Foundation Ireland Research Professorship in 2004.  He has been awarded over $15 million in funding, published 12 books and almost 200 research papers and book chapters.