“I have the best job in the world.”

That is not something everyone could say, but it’s what Arizona State University’s Katherine Krzys believes. A dedicated archivist, actress, director, author and historian, Krzys has been awarded two prestigious awards for her achievements in children’s theater education. 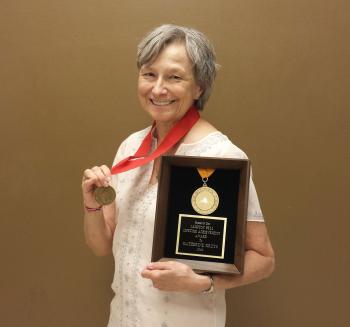 Katherine Krzys — an archivist at the Archives & Special Collections at ASU Libraries — received the Children’s Theatre Foundation of America’s Corey Medallion and the Campton Bell Lifetime Achievement Award at the American Alliance for Theatre and Education conference this summer. Download Full Image

In late July at the American Alliance for Theatre and Education (AATE) conference, Krzys — an archivist at the Archives & Special Collections at ASU Libraries — received the Children’s Theatre Foundation of America’s Corey Medallion and the Campton Bell Lifetime Achievement Award from AATE. These awards are the highest that can be achieved in the field of theater for youth; previous medallion award recipients include television’s “Mr. Rogers Neighborhood,” the National Endowment for the Arts, and Charles Schulz of “Peanuts” fame.

The Children’s Theatre Foundation of America award “honors recipients for their significant achievements for the enrichment of children in the United States and Canada through nurturing artistic work in theater and the arts,” according to its website.

Krzys has spent her professional career working toward that end.

As a graduate research assistant in the ASU MFA Theatre for Youth Program, she oversaw the transfer of the Child Drama Collection (CDC) from typewriter-generated books and archives into digital format stored on computers. The CDC collection contains more than 9,200 books, 290 periodical titles, more than 2,000 audio-visual media, and 3,500 linear feet of manuscript materials, documenting professional theater for young audiences, youth theater, and toddler-through-high-school theater education. More than 95 percent of these materials were donated.

Krzys was the founding curator of the Child Drama Collection starting in 1985, and under her leadership the CDC has grown to become the largest repository in the world documenting the international history of theater for youth dating as far back as the 16th century. In 1994, ASU Libraries also received a Children’s Theatre Foundation of America Medallion, which recognized Krzys’ contribution in creating the Child Drama Collection.

Krzys is widely recognized by her peers for her professional achievements.

“Kathy Krzys is probably one of the most treasured and important members of our Theatre for Youth community,” said Don Doyle, retired professor of theater at ASU. “It is because of her dedication and passion for collecting and archiving the meaningful materials in our field that especially students, educators and theater professionals, now and in the future, will know who we were, when and what we did, and that this all existed before them.  Leaders in this field can look at all of this history and be proud.

“Isn’t that amazing! Thank you, Kathy.”

When Morgan Carver Richards starts classes this week, she won’t need the typical orientation advice on how to reach out to her professor or ways to create a balance between studying and fun.Richards’ biggest study aid is her kids’ bedtime.“I work during the day,” she said. “So I do a lot of studying at night when they go to bed.”Richards, a mother of three who lives in the North Vall... 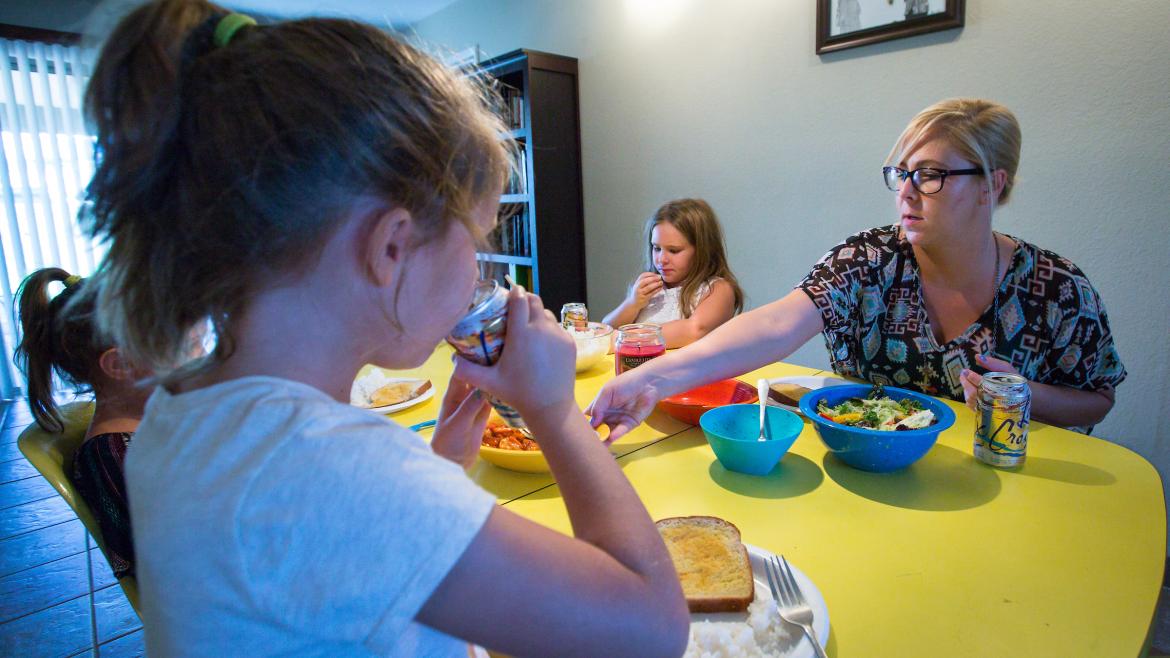 When Morgan Carver Richards starts classes this week, she won’t need the typical orientation advice on how to reach out to her professor or ways to create a balance between studying and fun.

“I work during the day,” she said. “So I do a lot of studying at night when they go to bed.”

Richards, a mother of three who lives in the North Valley, is a transfer student to Arizona State University and will begin pursuing her degree in anthropology through ASU Online. She has been taking classes through the Global Freshman Academy, ASU’s partnership with edX in which students can take freshmen-level classes for free online and pay for credit when they pass.

With a total of more than 15,000 transfer students enrolling in the 2015-2016 school year, ASU has spent the past few years developing ideas to smooth the transition for this group.

One is Transfer Connections, a special orientation program, held at the Tempe and Polytechnic campuses that’s now in its third year. Sarah Bennett created the program while she was pursuing her doctorate in education leadership in the Mary Lou Fulton Teachers College.

“I interviewed transfer students, who said that they had great advising, but they missed out on finding out about services that are available and a ‘welcome to ASU,’” said Bennett, who is now associate director for university academic success programs.

Transfer Connections is run like a conference, with a series of workshops, and is designed to engage the students with one another. The most popular session was a panel of transfer students who answered questions from the crowd.

“They see that they’re not alone in the experience,” she said of the students, who have ranged in age from 18 to 61.

Transfers students also have an interactive online orientation linked to their My ASU portal, according to Katherine Yeager, senior director of community college relations at ASU.

ASU’s outreach begins before the students even reach campus. The Transfer Ambassador program sends students to local community colleges to encourage them to think about pursuing a bachelor’s degree. That program, now in its second year, also supports events for transfer students at ASU’s locations. 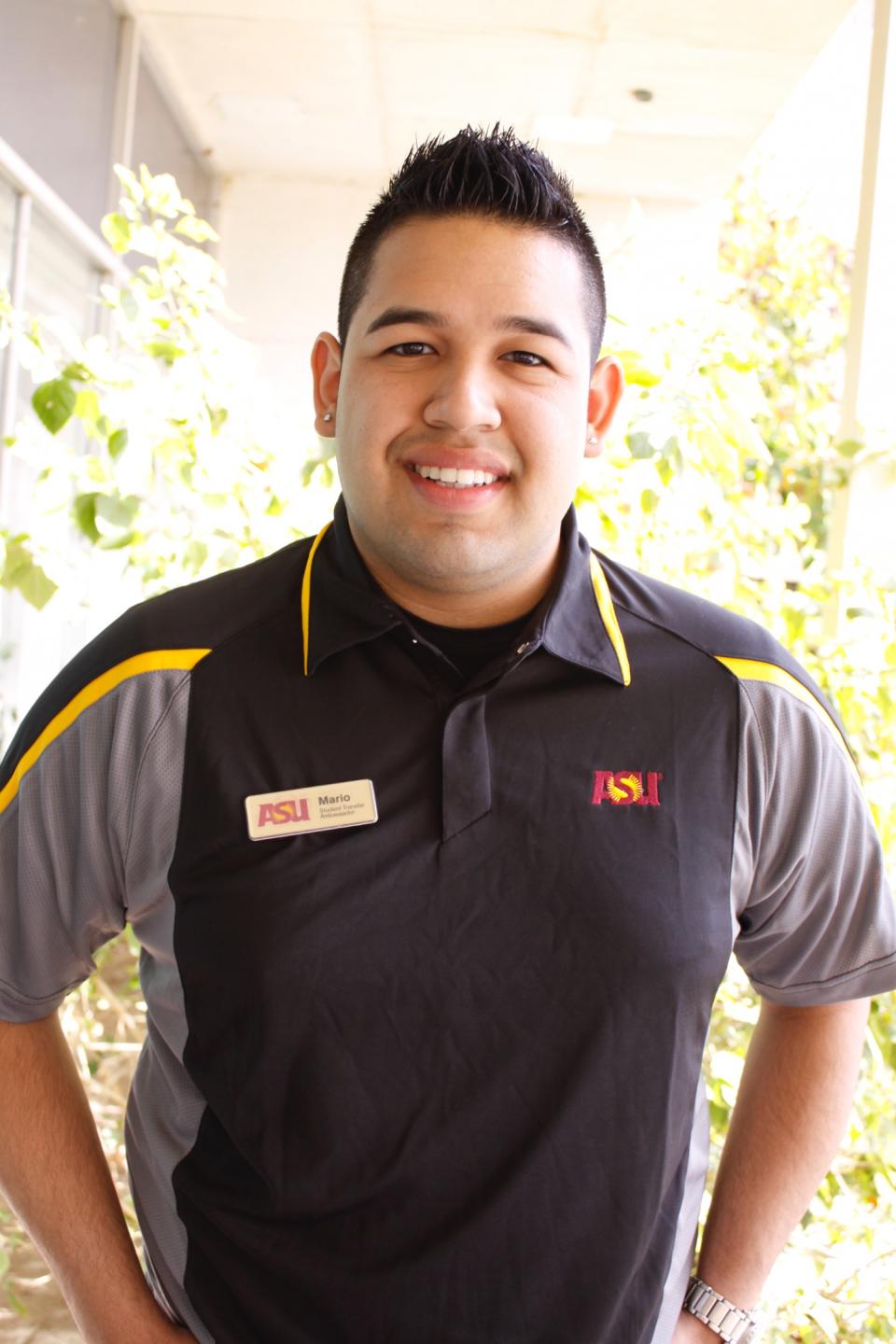 Mario Marquez, who transferred to ASU in the spring semester this year, shares his amazing story as a transfer ambassador.

Mario Marquez, a junior who’s majoring in public policy and public service, transferred last spring and decided to become an ambassador so he can share his story.

When he was a freshman in high school, Marquez’s parents were deported to Mexico. Born in Arizona, he went with them for a few months but returned to Phoenix, where he lived with relatives, friends and co-workers and changed high schools three times.

“I matured at a young age,” said Marquez, who realized as a sophomore in high school that he needed to be laser-focused. By the time he graduated from Paradise Valley High School, he had earned 22 credits from Paradise Valley Community College — accomplished while working full time at a fast-food restaurant.

“I was working 40 hours a week, going to high school, going to community college and had no transportation. I had no cellphone. I had to rely on friends. But I knew I had to sacrifice my time to be where I am now,” he said.

Marquez continued at Paradise Valley Community College, taking classes and working on campus. He graduated with an associate’s degree. Even though he knew he wanted to transfer to ASU, Marquez wasn’t in the Maricopa to ASU Pathways Program, so some of the credits he took did not apply to his degree program at ASU.

ASU encourages transfer by allowing students at the 10 Maricopa Community Colleges to map out their courses for most majors, so they take only classes that go toward a degree. The Maricopa to ASU Pathways Program, or MAPP, can prevent students from wasting time and money on credits that don’t transfer. Unfortunately, only about a quarter of the community college transfers are in a MAPP, according to Yeager.

“As a transfer ambassador, our job is to promote the MAPP program, but I didn’t listen to that advice,” said Marquez, who now stresses its importance to community college students. “I like being in this position because I can impact the life of students by sharing my story.”

Marquez said that his story shows that transfer students, who usually have jobs, can take a different route to ASU, but “they’re very focused on getting that degree.”

That’s also the case with Richards, who works as a writer and comedian and decided to start taking online classes through the Global Freshman Academy while her family was living in Dubai for her husband’s job.

“I busted my butt with the Global Freshman Academy because my intention was to pursue my degree further,” she said.

When the family moved to her husband’s hometown in January, she decided to complete her degree through ASU Online, and she also plans to take some face-to-face ASU classes. Richards’ husband and many of his relatives are ASU alumni.

“My adviser has been above-and-beyond helpful,” she said. “And I’m so excited.”

Top photo: Iris Richards (left), 7, takes a sip of coconut water as her sister Heidi, 9, and mother, Morgan Carver Richards, eat their dinner at their home in the North Valley. Richards and her family recently returned to the Valley after living abroad. Richards is transferring to ASU, taking 18 credits this semester through both Global Freshman Academy and ASU Online. Photo by Charlie Leight/ASU Now