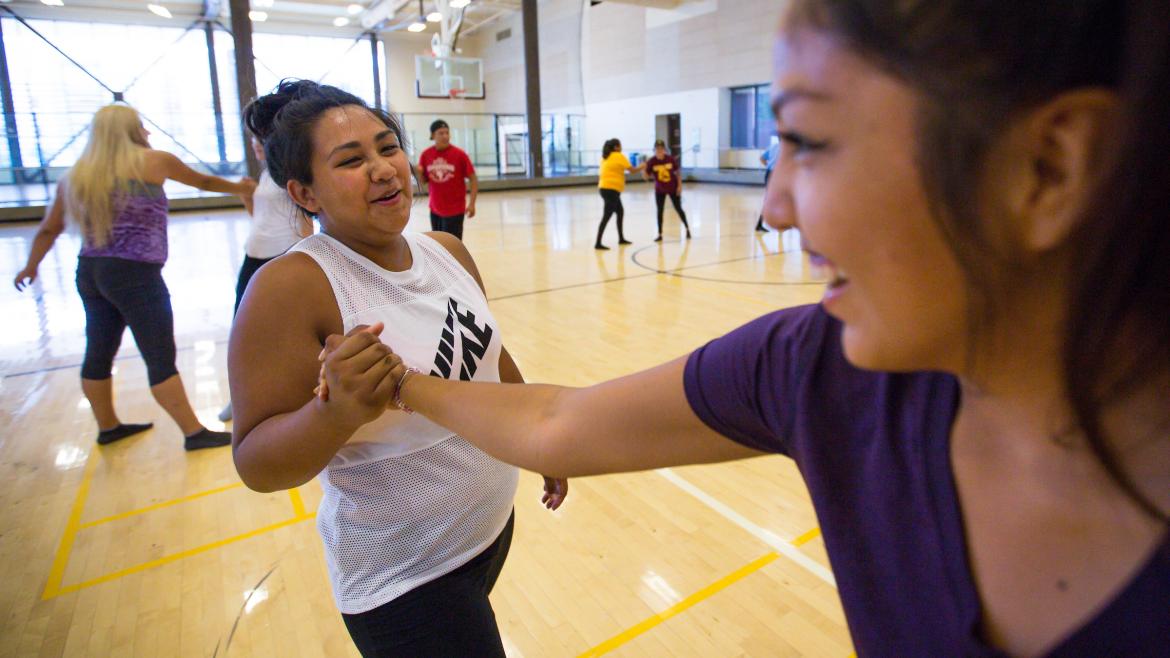 Native American students who go from a reservation or rural community to a large university such as Arizona State University often face issues that others on campus can’t fathom.

“It’s a completely different environment and like stepping into a whole new world,” Flores said.

Recognizing the unique challenges, ASU’s American Indian Student Support Services organizes an early start program geared specifically toward Native students making the rural to urban transition. The program, Student Preparedness Initiative: Readiness Inspired by Tradition, gives students two weeks to acclimate to the university, connect with friends and mentors, and learn about resources and student organizations before the start of the fall semester.

Students in the 2016 SPIRIT cohort will also hear from peer ambassadors such as Flores, who will be able to share how she navigated the emotional struggles of her first year at ASU: “Always remember where you came from and stay focused on your mission for coming to college in the first place.”

Laura Gonzales-Macias, associate director of American Indian Student Support Services, said the purpose of SPIRIT is to “create a successful environment for Native American students and to strengthen their confidence as well as give them a sense of belonging.” That includes giving equal attention to students’ intellectual, emotional, spiritual and physical well-being.

Native American and indigenous students who grow up on reservations often find themselves suffering from more than run-of-the-mill homesickness. Beyond being separated from friends, family and familiar routines, many are also an ethnic minority for the first time in their day-to-day lives. The number of adjustments can be staggering, but Gonzales-Macias said SPIRIT can help. The first cohort of students in 2014 had a 7 percent higher retention rate than their first-time freshman peers who didn’t attend the program, she said, adding that the 2015 cohort had a 100 percent retention rate into the next school year.

Making connections to other American Indian and Alaska Natives was important to bioscience major Andrea Smolsey, who was born on the White Mountain Apache Reservation in eastern Arizona but attended high school in Louisiana. “Growing up in the military, I felt disconnected to my heritage. Coming here and being around other natives who know my family feels good.”

The program featured several group activities and more than 30 presentations and workshops by alumni, Native graduate students and administrators from many ASU student-support units and student organizations. 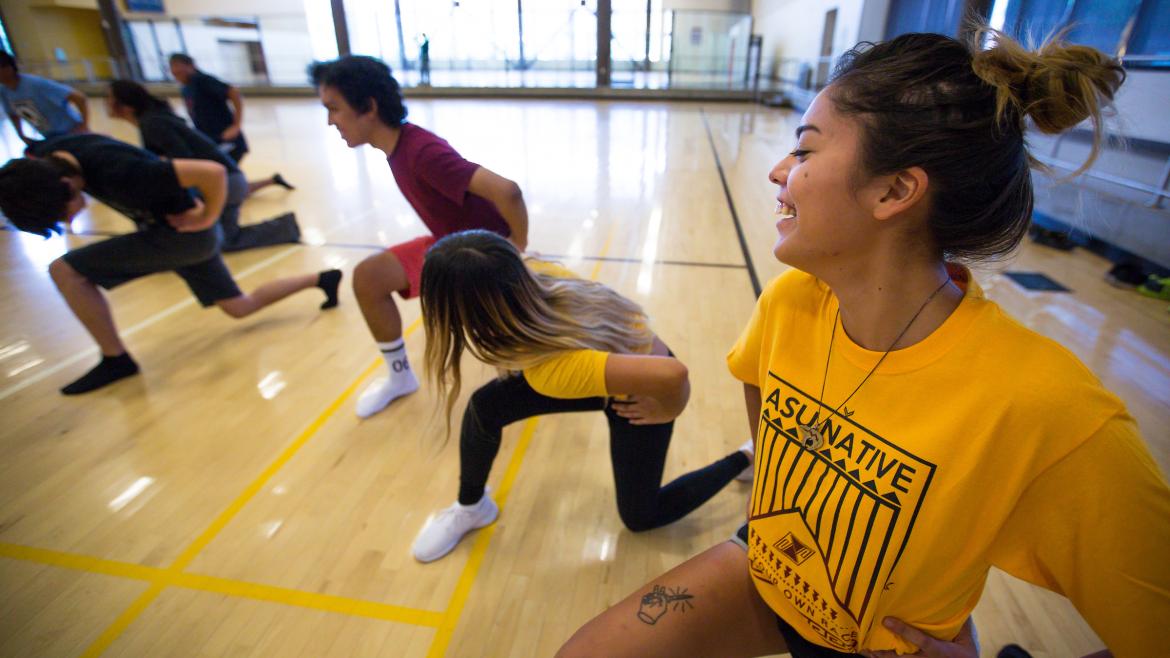 “She had a great way of connecting with us and didn’t sugarcoat anything,” Roman said.

SPIRIT participants also completed ASU 19, a one-week course designed to set them up for academic success by introducing electronic tools and processes such as Blackboard, Digication e-portfolio and Writing Pal. They also completed an argumentative writing assignment and practiced attending office hours.

Pomo Tribe member Mica Sanchez traveled from Alameda, California, to attend ASU. He found ASU 19 especially helpful. “It teaches you etiquette with instructors and staff members, how to find homework and that almost everything is done online.”

Fitness instructor and ASU alumnus Dion Begay (pictured below) visited the Tempe campus on Wednesday to remind students not to spend all of their time on the computer and to incorporate exercise into their daily routines. 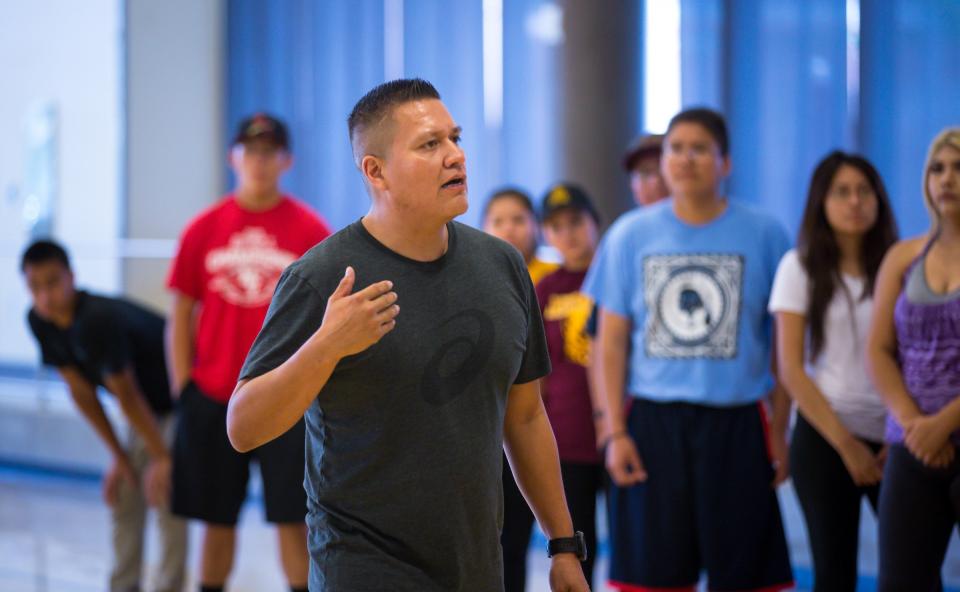 Dion Begay instructs students in the seven primal moves that will support their bodies with strength and flexibility in the Staying Active program during the SPIRIT workshop at the Sun Devil Fitness Complex on Aug. 10. Begay, an ASU alumnus who is an exercise physiologist and personal trainer, taught half the 70 students about taking care of and strengthening their bodies while they transition to their first year at ASU. Photo by Charlie Leight/ASU Now

“Everybody knows about the freshman 15, and I fell into that trap, too,” said Begay, a Navajo Tribe member who studied kinesiology at ASU. “In that first year of college, students get away from regimented eating and exercises. Sometimes they overindulge, lead sedentary lives and work out a lot less. Over time that will lead to health problems.”

Flores, a member of last year’s SPIRIT cohort, said joining clubs, organizations and participating in social experiences is also important for students’ overall well-being, and helped her get through her freshman year. She said she no longer feels homesick.

“I now have two families,” she said. “One here at ASU and one at home.”

Top photo: Criminology and criminal justice freshman Kealoha Kuamoo (left), of Hawaiian and Navajo descent, practices pushing and pulling with exercise and wellness freshman Megan Silversmith, of the Navajo Nation, as part of the Staying Active program during the SPIRIT workshop at the Sun Devil Fitness Complex on Aug. 10.

For more than 30 years, the ASU Guitar Series has impressed audiences with a selection of unforgettable performances by virtuosos from around the world. This year’s lineup is sure to continue this tradition, showing off the skills of seasoned musicians as well as introducing fresh new talent.Thibaut GarciaSaturday, Oct. 22, 2016Born in Toulouse, France, Thibaut Garcia began to play the guita...

For more than 30 years, the ASU Guitar Series has impressed audiences with a selection of unforgettable performances by virtuosos from around the world. This year’s lineup is sure to continue this tradition, showing off the skills of seasoned musicians as well as introducing fresh new talent. 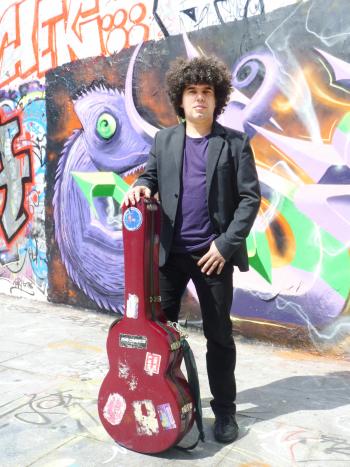 French guitarist Judicaël Perroy will appear in Tempe as part of the ASU School of Music's 2016-17 guitar series.

Born in Toulouse, France, Thibaut Garcia began to play the guitar at the age of seven. At 16, he entered the Conservatoire national supérieur de musique et de danse de Paris, where he completed his bachelor’s degree studying with Olivier Chassain. He currently studies privately with Judicaël Perroy. At 21, Garcia has already won important competitions, including the Guitar Foundation of America International Competition in 2015, the Jose Tomás International Competition in Spain in 2014, the Sevilla International Guitar Competition in 2013, the Terra Siculorum in Romania in 2013, the Ana Amalia in Weimar, Germany in 2011 and the Valle de Egues in Spain in 2008.

The Kithara Duo, made up of Olga Amelkina-Vera and Fernand Vera, was formed in 2002 and has performed nationally as well as in Europe and South America. Kithara Duo’s critically acclaimed debut CD, Beings, was released by Soundset Recordings in 2011. Kithara Duo is made up of faculty at Collin College in Plano, Texas, where Fernand directs the award-winning Guitar Studies program and Olga teaches in the guitar, theory, history and composition areas. For more information, please follow the duo at www.facebook.com/kitharaduo.

Born in Paris in 1973, Judicaël Perroy began his guitar studies at the Paris Academy of Music at the age of seven with Raymond Gratien. An acknowledged prodigy by the age of 11, he won numerous prizes, culminating with his triumph in 1997 at the Guitar Foundation of America International Solo Competition. Perroy is in great demand as a teacher and adjudicator at numerous international festivals, and his students continue to win top prizes in regional, national and international competitions worldwide. He teaches at the National Academy of Aulnay-sous-Bois and École Superieur á Lille.

Andrew York is one of today’s best loved composers for classical guitar and a performer of international stature. His compositions blend the styles of ancient eras with modern musical directions, creating music that is at once vital, multileveled and accessible. York received a Grammy Award as a member of the Los Angeles Guitar Quartet during his 16 years with the cutting-edge ensemble. York’s authenticity in concert has inspired a worldwide following, with his touring schedule spanning more than 30 countries. He has presented recent concerts in Rome, Lima, Beijing, Ankara, Munich, Manhattan, Finland, Estonia, Lithuania and Japan.

All performances are in Katzin Concert Hall in the School of Music, starting at 7:30 p.m.

Tickets are available at the door, or in advance at herbergerinstitute.asu.edu/events/tickets