Your first semester earning a degree can be a daunting task. It is something U.S. Congresswoman Kyrsten Sinema knows all too well as she starts an MBA program this fall working towards her fifth degree.

Sinema addressed a group of ASU freshmen participating in the Early Start Program in the School of Politics and Global Studies on Aug. 4 by sharing personal stories from her upbringing.

Sinema shared how her family struggled through homelessness and poverty growing up, including living in an abandoned gas station for almost three years. She knew that even though her family wouldn’t be able to help her through college, a degree would be vital to her success.

“I knew that if I had a good education then I could always find a good job,” explained Sinema. “If I had a good job then I would have a home and I wouldn’t face poverty and homelessness again.”

The Early Start Program helps prepare incoming freshmen for their transition to ASU. From listening to notable guest speakers like Sinema to visiting the Arizona State Capital, students experience a lively, engaging and thought-proving program design to create a pathway to success.

“The program helps students overcome any fears of ‘going it alone.’ We are a community of learners and scholars,” said political science lecturer Gina Woodall. “Your professors, staff, and peers are here to help you learn and understand new things.  We introduce them to these resources.”

This year, students were given the task to read Angela Duckworth’s book, "Grit: The Power of Passion and Perseverance." When asked how they would rate Sinema’s “grit level,” many students suggested she scored anywhere from a 4.9 to 5.0.

When asked what his takeaway from the talk was, freshman Spencer Henry said, “Take opportunity when it’s presented.”

In her closing remarks Sinema gave this advice to the group of students:

“Spend your time in college learning how to think critically. The number one most important skill of your life is learning to think for yourself.”

As an Arizona native with nostalgic ties to Arizona State University, alumna Jovanna Anzaldua has a long family history at the university. She remembers exploring the campus as a child when her mother was a student, and the decision to attend the university was a “no-brainer.”Anzaldua graduated with a Bachelor of Arts in communication from the College of Liberal Arts and Sciences in 2009, but ...

As an Arizona native with nostalgic ties to Arizona State University, alumna Jovanna Anzaldua has a long family history at the university. She remembers exploring the campus as a child when her mother was a student, and the decision to attend the university was a “no-brainer.”

Anzaldua graduated with a Bachelor of Arts in communication from the College of Liberal Arts and Sciences in 2009, but was unsure of what career field she wanted to enter. The diverse and broad skill set from her communication degree offered her a range of career possibilities. 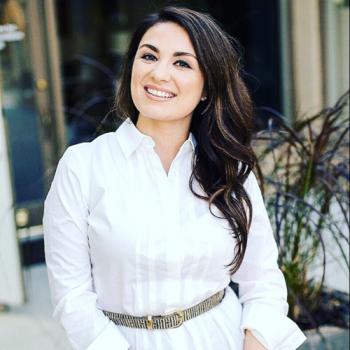 “I think the communication degree was a really strong foundation for the kind of jobs I’ve had in between, and the academic path I’ve chosen to take,” Anzaldua said. “It’s always a benefit when someone sees you have a communication degree … any job listing you look at is going to list communication, the ability to communicate effectively among several mediums. It has really lent itself to me in that way.”

After her undergraduate career, Anzaldua earned her Master of Public Administration from the School of Public Affairs at ASU while working for the Downtown Phoenix Partnership. It was in her master’s program she discovered a passion for policy, specifically with women’s health, and wanted to make a difference in women’s lives.

“I want to empower others who don’t have the same access to information that I do, and make sure that information and health care is accessible to people,” Anzaldua said.

After completing her graduate program, Anzaldua continued working as a consultant for different women’s nonprofits as well as the county public health department. Today, she works part-time at ASU’s Art Museum as a program coordinator, and will begin a doctoral program in the Center for Biology and Society this fall.

The Center for Biology and Society in the School of Life Sciences focuses on the intersection of life sciences studies and their interconnections with society through policy, law and other areas. Anzaldua looked into the program when she noticed a common lack of scientific understanding in policy making and program development.

“You can’t make laws and policy without knowing what you’re talking about, so I wanted to have at least this baseline knowledge of the science behind it,” she said. “I think the three degrees really work together to create exactly what I want, the set of skills I want and the expertise I want to lend to people.

Anzaldua recently had the opportunity to attend the United State of Women summit at the White House this June, an international conference focusing on a variety of topics affecting women across the world. In her current work at the ASU Art Museum, Anzaldua is working on a two to three-year university-wide program addressing sexual assault on college campuses.

Outside of her career, she has also started a blog called “Schmooze: Lady Connected” to connect women entrepreneurs across Arizona. The project includes podcasts and written interviews with mayors, art producers, business owners and other prominent women to give others a networking opportunity — which has been vital for her own success as well as others.

“I didn’t learn the importance of meeting people and sharing your story and exploring what you’re interested in, and sharing that with other people until after I got my communication degree,” she said. “I think it’s a powerful tool. And you never know who knows who. That’s probably the biggest lesson I’ve learned since my degree and throughout my career.”

Anzaldua recently hosted Schmooze’s first in-person event in June, where she brought together more than 50 women at a networking event in downtown Phoenix.

In the future, Anzaldua plans to continue consulting work for national organizations, working with program development, program evaluation or policy analysis. She hopes to build a legacy of empowerment for women who might not have access to the same opportunities she did.

“It’s not just giving them something or advocating for them, but to serve as a way for women to become empowered and do it themselves,” Anzaldua said. “So no matter what project I’m working on, I feel like that’s what drives me: ‘here’s what I do, but more so here are tools or a way for you to do better for yourself.’”