Downtown Phoenix campus
Have trouble being honest with your doctor? ASU researchers may be able to help.
When you know how someone is really feeling, you can help them be more open.
July 19, 2016

If you’ve ever lied to your doctor, chances are you’re not alone. But whether you’re ashamed of eating too much bacon or you’re trying to hide a smoking habit, the fact is, the more honest you are, the better equipped a physician is to help you.

So what if your doctors could tell whether you were hiding something? Better yet, what if they could adjust their bedside manner so that you never felt the urge to fib in the first place?

That’s what a couple of researchers at Arizona State University are hoping to make a reality.

At the Motivational Interviewing Laboratory on ASU’s downtown Phoenix campus, professor Jack ChisumJack Chisum is a clinical associate professor in the School of Nutrition and Health Promotion, an academic unit of the College of Health Solutions at ASU. and tech support analyst Glenn Brown are putting cutting-edge technologies to work in an attempt to build a better health care practitioner.

Using a combination of facial recognition and layered voice analysis software, they have been able to analyze an individual’s emotional responses during conversation with remarkable accuracy.

“In the near future, we’ll tell you what you’re thinking,” Brown said.

Turns out, when you know what someone is really thinking and feeling, you gain insight into ways you can make them feel more comfortable and forthcoming. 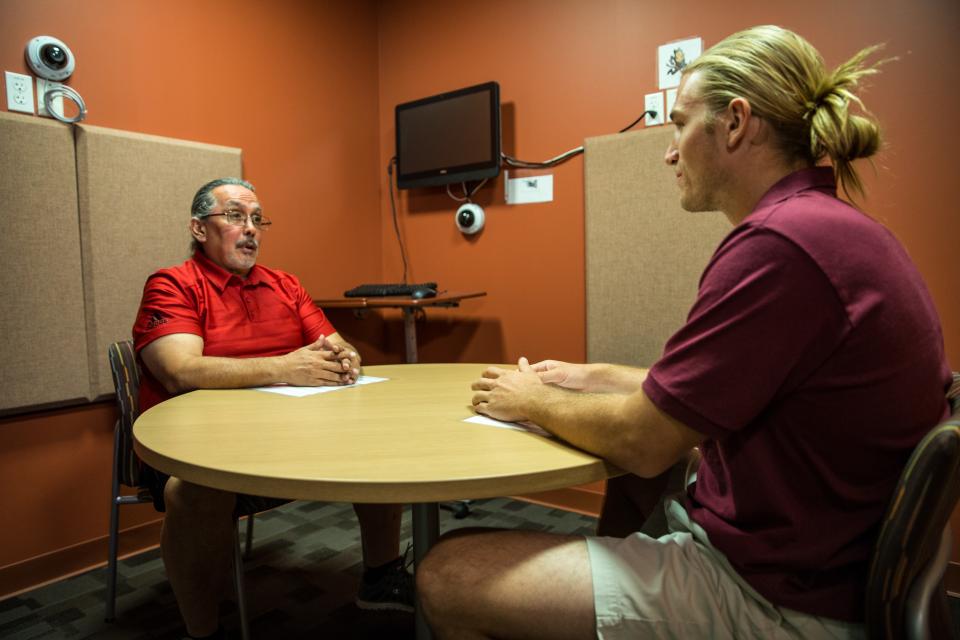 Soon, Chisum and Brown plan to incorporate two more software capabilities that promise to further enhance the accuracy of their emotion analyses: one that measures physiological responses, such as blood pressure and perspiration, and one that measures brain activity.

Although their primary goal is to improve communication between and among patients and practitioners in the health care sector, the possible technical applications are manifold — the duo have received inquiries from professionals in fields ranging from law to insurance to business management.

“Anywhere where you can have two people in dialogue, this can be used,” Chisum explained.

Four hundred ninety-one — that’s the number of points on a human face the Noldus facial recognition software can detect.

So even if you think you can hide your disdain for a certain line of questioning from your doctor, Chisum assures, “You can’t hide from this technology.”

As for the voice analysis software, it splits the voice out to 1/10,000th of a second — meaning for every five seconds of vocalization, there are 5,000 sections of the voice that can be analyzed. (The software has most notably been used for counter-terrorism efforts to detect high levels of anxiety in a would-be terrorist’s voice, alerting officials to possible danger.)

Using these two very powerful tools to analyze video footage of an individual during a conversation gives you an incredibly accurate, incredibly detailed look at how they are truly reacting.

Noldus uses infrared technology to track minute facial movements, which it translates into a graph depicting different-colored lines for different emotions. Similarly, the voice analysis tracks minute vocal changes that indicate a change in emotion. When a researcher looks at the resulting data and sees a change or spike in emotion, all he or she has to do is back up the video to that point in time to see what caused it.

“Putting the face and the voice together, that’s measurable,” Chisum said. “A very finite measurement.”

In the case of one of Chisum’s clients who agreed to participate in a study about obesity, reviewing her data showed him that she reacted negatively to questions about her ideal body weight and exercise habits — even though she appeared outwardly neutral or even happy. Chisum was then able to share that information with her psychiatrist, who helped her to focus on those areas and work through them.

Chisum and Brown are now in the testing phases of implementing software that can detect changes in a person’s physiological responses. Called Shimmer, it attaches to a person’s fingers to measure things such as blood pressure, oxygen saturation and perspiration levels.

Eventually, they’d also like to incorporate a neurological component, using an EEGAn electroencephalogram (EEG) is a test that detects electrical activity in the brain using small, flat metal discs (electrodes) attached to the scalp. net to detect changes in brain activity.

Considering the potential this technology has to enact positive change on any number of professional fields, it may be surprising to discover Chisum and Brown are the first to be researching its use for that purpose (as opposed to more stern purposes, such as interrogation).

“No one else in the world is doing this,” Chisum said. “And we know that because all the software providers have told us that.” 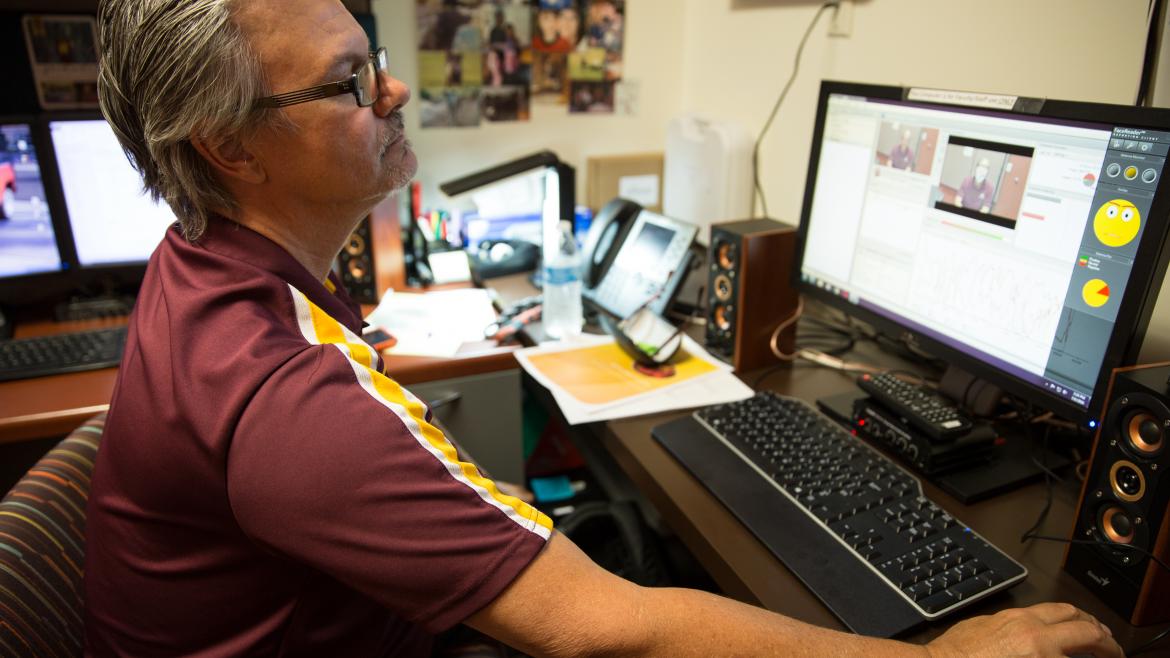 And the best part?

“We’re not confined to this lab,” said Chisum.

Data captured by the software can be analyzed from anywhere in the world. Theoretically, a hospital in Kathmandu could record a conversation between a doctor and a nurse, send it to Chisum and Brown to be analyzed at ASU, and then make communication improvements based on the results.

He and Brown simply cannot do it alone; they need more students to train in the technologies who can then disseminate it across various professional sectors. But the outlook is good, with numbers of interested parties growing daily.

Their hope is that the use of this type of technology will eventually become commonplace in the health care sector. Where it goes beyond that is limited only by human ingenuity.

Transitioning from coal to solar in Kosovo

Kosovo, one of the world's youngest countries, relies on two aging coal-fueled power plants to generate electricity for its population of almost 2 million. The plants are inefficient, dirty, dangerous and unreliable. Customers frequently lose power, and critical facilities such as hospitals rely on stand-by generators. Arizona State University professors, however, have begun working to help addres...

Transitioning from coal to solar in Kosovo

Kosovo, one of the world's youngest countries, relies on two aging coal-fueled power plants to generate electricity for its population of almost 2 million. The plants are inefficient, dirty, dangerous and unreliable. Customers frequently lose power, and critical facilities such as hospitals rely on stand-by generators. Arizona State University professors, however, have begun working to help address these issues.

When ASU’s Melikian Center for Russian, Eurasian and East European Studies learned that funding was available to support professional training in Kosovo, the center approached the School of Sustainability to create a program on renewable energy and sustainability. 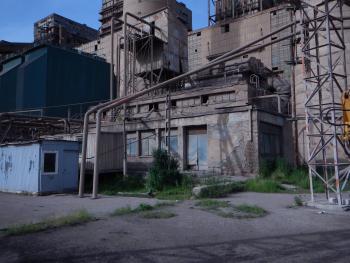 Kosovo A is one of the region’s two sources of electricity and is one of the dirtiest power plants in Europe. An ASU team presented ideas for improving Kosovo’s energy supply and converting to clean solar sources. Photo courtesy M. Pasqualetti Download Full Image

Professor Stephan Batalden, then-director of the Melikian Center worked with Ryan Johnson of ASU’s School of Sustainability, electrical engineer Ron Roedel and geographer Martin Pasqualetti to develop a proposal. The proposal to give a two-week seminar on renewable energy and sustainability was accepted by the U.S. Agency for International Development (US AID) in collaboration with World Learning, a nongovernmental organization that sponsors education, sustainable development and exchange programs in more than 60 countries.

Johnson approached Pasqualetti and Roedel because of their expertise in renewable energy and their experience with a similar program in the Middle East. "However," Pasqualetti said, "developing a workshop for Kosovo required learning the administrative, political and educational aspects of energy in that country, as well as what other work had been done on alternative energy in the region.”

“A striking aspect of Kosovo is its substantial solar energy resource, yet its complete lack of development of solar power," he said. "It receives about 80 percent of Arizona’s solar insolation. That’s a higher level of sunlight than Germany, which has extensive solar energy facilities.”

The two professors’ first visit, prior to conducting the workshop, was to the Kosovo Energy Company (KEK), which runs the area’s two coal-fueled power plants. They toured the plants, the adjacent lignite coal strip mines and the massive ash disposal areas nearby. The company’s chairman, Berat Rukiqi, explained that, although lignite coal is plentiful, he thinks Kosovo must reduce its carbon footprint to comply with international standards. He sees solar power as an excellent option that his company can lead.

“We saw a reclaimed strip mine and realized that this type of land would be ideal for siting solar equipment at the scale needed for a utility company,” Roedel said.

Roedel and Pasqualetti presented these insights on Kosovo’s solar energy potential to the participants in the seminar that took place in Pristina, Kosovo, from May 30-June 10, 2016.

The participants were 11 faculty members from the Kosovar Universities of Pristina and Mitrovica, selected with a goal of bringing together diverse areas of expertise. The group included mechanical and electrical engineers, a sociologist, an anthropologist, a physicist and a chemist. Each day’s schedule was split between presentations by Pasqualetti, who focused on the social aspects of transitioning to a new energy source, and Roedel, who focused on the technical aspects of renewable energy. Together, they worked to demonstrate the value of interdisciplinary collaboration, considering energy as largely a social issue, and the benefits of substituting renewable energy — especially solar — for dependence on coal.

The participants were enthused. One wrote: “The session was useful first of all because it strengthened the importance of interdisciplinary approaches.”

The seminar concluded with creation of an action plan to create an interdisciplinary undergraduate certificate program in renewable energy and sustainability at the University of Pristina.  While this was intended as an exercise, participants stated that the action plan seemed realistic to them, and that they would like to participate in it if it is developed.

If created, the certificate program could benefit from a partnership with ASU’s Professional Science Master’s program in Solar Energy Engineering and Commercialization. Pasqualetti, who is a member of the faculty of the masters’ program, and Roedel, who wrote the original proposal, envision teams of ASU and University of Pristina faculty collaborating on research issues of financing, transitioning from coal to solar, streamlining the permitting process and more.

Pasqualetti and Roedel reached out to First Solar, the world’s largest installer of solar power facilities, and received encouragement from the company’s European managing director.  They’re continuing the conversation with First Solar’s leadership at their Tempe headquarters, discussing opportunities for First Solar to work with ASU to develop solar energy in Kosovo and to collaborate with student training and exchanges between ASU and the University of Pristina.

The sponsoring USAID/World Learning leadership has shown support of the workshop as well, suggesting further collaboration to foster renewable energy development in Kosovo.

Both Roedel and Pasqualetti believe that opportunities abound in Kosovo for the solar enterprise, in both the business and academic worlds, and that ASU, in collaboration with First Solar, can help Kosovo build a successful solar future.