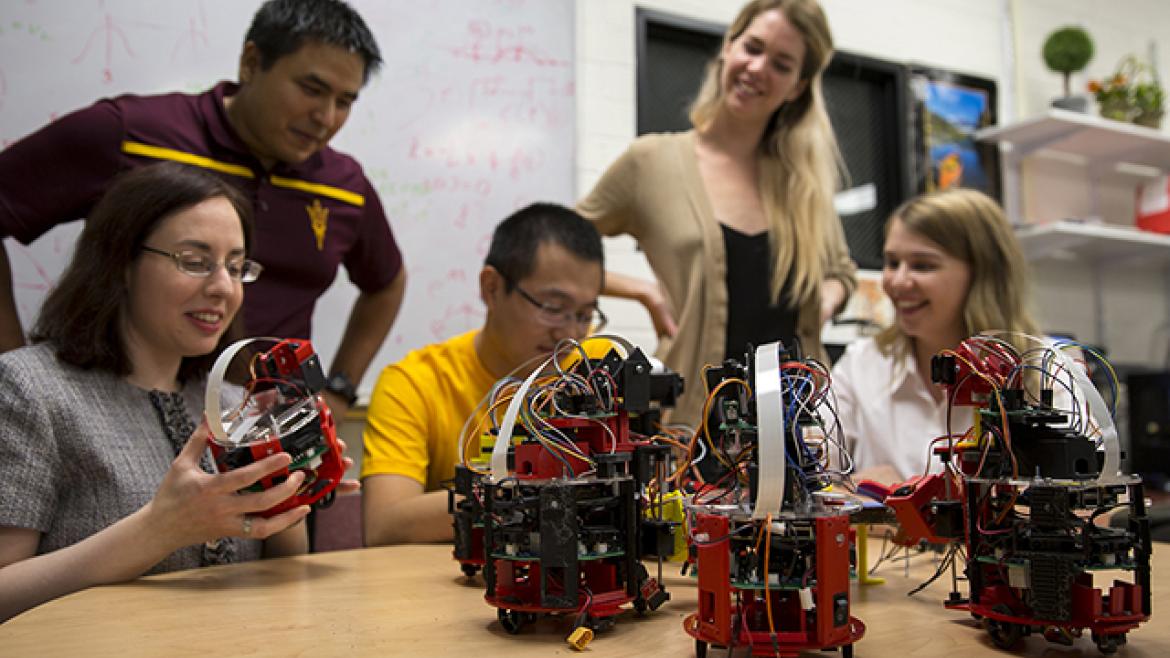 Spring Berman doesn’t have the droids you’re looking for. Instead, she’s developing droids that can look for you.

That might sound ominous, but rest assured, the assistant professor of mechanical and aerospace engineering at the Ira A. Fulton Schools of Engineering is working on robots that go where humans can’t and work how humans often won’t — cooperatively. She’s developing techniques for modeling, optimizing and controlling very large collectives of robots, or robot swarms. Someday, these conglomerates of small autonomous agents may be used in search-and-rescue operations, scouring remote wildernesses for a lost hiker, or looking for survivors after a tornado or earthquake. They may even aid in exploration or inspection tasks, as well.

She recently received a $170,000 a year, three-year Office of Naval Research Young Investigator Program award, which she’ll use to develop methods for deploying collaborative, coordinated robot swarms that can adapt to a given environment. To control robots that can adjust their behavior in response to their environment, Berman looks to the natural world for inspiration. Collective animal behavior, evident in schools of fish, flocks of birds or herds of sheep, is characterized by the lack of centralized leadership. Instead, individual animals within a collective use information about their environment or their neighbors to determine where to go — be that toward food or away from a predator.

“The ability to coordinate a lot of different agents, especially in the face of uncertainty or failure, is going to be very important going forward,” Berman said. “Biology really excels at this. If a particular strategy has been used for millions of years, there’s a reason for it.”

While Berman borrows from nature’s tried-and-true strategies, she imagines applications that could in turn be used to benefit the natural world. She sees potential for using robot collectives in environmental conservation efforts, such as planting trees, monitoring forest fires or even providing persistent surveillance of an area to deter poachers.

Robot swarms could also be used to gather data to track a variety of environmental factors, from the population of a threatened or endangered species to temperature levels or even the state of polar ice caps.

“With a swarm of robots, you can obtain an enormous amount of data from many points of view — in the air, on the ground, underwater — and observe how the information changes over time,” Berman said.

Making robot swarms that work together by gathering and sharing information isn’t her sole endeavor, either. She also wants to develop ways for them to assist one another physically through cooperative manipulation of objects.

“We’re studying ants that have developed robust and efficient ways to move food items in teams around obstacles. If we could fully automate this type of problem solving, it could be really valuable for transport, assembly and construction in places that are difficult for humans to access,” she said.

Berman uses sophisticated 3-D modeling programs and other software tools to simulate robots performing a desired task, such as cooperatively moving an object. The simulations can be reset and altered at a lower cost and in less time compared with running numerous experiments with real robots.

This research could someday lead to scenarios in which a group of robots cooperatively sift through rubble and debris in the wake of an earthquake to find survivors. Add airborne drones to that equation, and you have a level of teamwork and coordination unattainable with human assets.

“You could deploy a heterogeneous swarm of different vehicles working toward a common goal and supporting one another from different locations,” Berman said.

Drone swarms could be used for other humanitarian ends as well, such as detecting land mines or delivering much-needed supplies to disaster-stricken areas.

While many uses of her robot swarms tackle large-scale problems, another potential application of Berman’s research would have a much smaller focus — on a micro or even nano scale.

“I’m interested in applying our control approaches to emerging micro- and nanorobotic technology that could be used for biomedical applications, such as targeting tumors to deliver treatment directly to cancer cells, or performing very precise surgeries,” Berman said.

Looking forward, Berman hopes to use her research award to meet objectives that range from theoretical developments to hardware implementation.

In the realm of theory, Berman is developing models that represent a swarm as a single continuous field, controlling these models to reshape the swarm’s collective behavior, and using the models to estimate properties of the environment. Berman and her colleagues are working on quantifying and minimizing the difference between the model predictions and the behaviors of actual agents in the swarm.

To validate these approaches, Berman will conduct experiments on a test bed that combines small ground robots, which were designed and fabricated by students in her lab, and aerial vehicles such as commercially available quadcopters. The test bed will establish a physical example of how multiple types of agents could communicate and collaborate.

Though the very thought of robot swarms may seem impossibly futuristic or something out of science fiction, Berman sees her work as an extension of how robots are used today.

“Many people currently use robots to complete tasks that are dull, dangerous or dirty,” Berman said. “I think that swarms will be highly effective tools for these kinds of tasks, just on a much larger scale.”