Samantha Winter grew up with Arizona State University in her backyard. As a Tempe native, she spent her childhood around campus, watching shows at ASU Gammage and participating in Sun Devil traditions. Now an alumna of the university, she's in the Valley growing her career in law.

“It was hard to turn down the opportunity to go to a major research university in a major city,” she said. “ASU offered me the best of all worlds, and it was something I was very familiar with.” 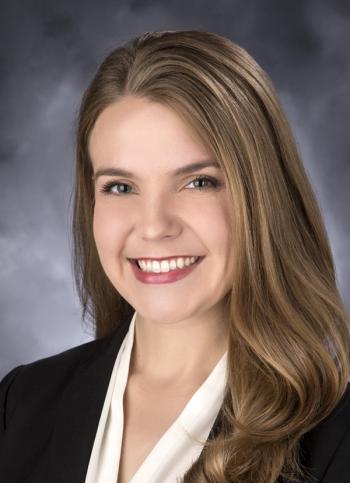 As a Flinn Scholar from a small high school in the Valley, Winter decided to attend college in her hometown, but she knew the university’s large size could be an adjustment. She quickly found comfort in the College of Liberal Arts and Sciences and Barrett, The Honors College.

“It was just sort of a culture shock in terms of how large it was,” Winter said. “Both the College of Liberal Arts and Sciences and The Honors College really helped me ground myself.”

Winter chose to pursue undergraduate majors in English, Spanish and history with the hopes of attending law school in the future. As an avid reader, English was an obvious choice for her. She chose Spanish because of its usefulness, and she added a dual emphasis in American and Latin American history to provide context for her other studies.

“What really attracted me to the College of Liberal Arts and Sciences is this idea that they are teaching you to think critically, and I knew that would be important generally in life, but also in what I thought would be my chosen career,” she said.

With different fields of study came interactions with a range of professors, which Winter enjoyed. Two of her close mentors later became her thesis advisers, and many wrote letters of recommendation for her as she pursued law school after graduation. Winter’s most influential mentors were Ted Humphrey, founding dean of Barrett; Janet Burke, former associate dean of Barrett; and Ileana Orlich, professor in the School of International Letters and Cultures.

“It was really nice to be able to have really talented faculty to go to and say, ‘I really liked this class — what should I do to follow up on this?’” she said. “I found the faculty to be very open and invested in their own research. It was very helpful having people who were passionate about what they were doing and share that passion.”

After graduating from the university in 2008, Winter attended law school at the University of Notre Dame. At the time, the job market for lawyers was daunting, but she decided to be flexible with her location and hoped for a chance to return to the Valley. Today, Winter is an attorney with Sacks Tierney, a law firm in Scottsdale, Arizona, where she does estate planning and probate litigation.

“I’m particularly pleased with what I’m doing now, because I get to help people sort out problems before they occur … and I also get to get involved and advocate for people with something terrible that has happened to them,” Winter said. “It’s very rewarding and intellectually challenging.”

Winter attributes much of her success in law school to her liberal arts degrees, which she says taught her to think critically, argue effectively and become a strong writer.

“Getting to spend four years broadening my perspective, learning about the world, learning about what my place might be in it … was really valuable,” Winter said. “The liberal arts program in general provided a really strong foundation for me to build my profession.”

Winter recently went back to school to receive her Master of Laws in taxation in 2014, which was a major career change for her. She quickly discovered her liberal arts background would give her the confidence to tackle an intimidating new subject.

“As you’ve noticed in my degrees, there’s not a lot of math involved in any of those,” she said. “If you told me five years ago that I would be doing tax law, I would have laughed at you because it was my hardest course in law school, and I hated it because it was scary.”

As for the future, Winter plans to continue on her current career path, although the practice of law does have many options. She hopes to continue making a name for herself at Sacks Tierney. In her personal and professional life, Winter looks forward to having a family with her fiancé and having the chance to impact the people in her life.

“I would like the people I’m closest to to be able to feel like I was an active member of their life who helped them achieve their goals,” she said. “You should try to make yourself the person who you needed when you were younger. And I would love to be able to do that professionally.”

To commemorate the 100th anniversary of the birth of Walter Cronkite, a large-scale public celebration featuring some of the nation’s top journalists will be held this fall at the Newseum in Washington, D.C.Hosted by the Newseum, CBS News and Arizona State University’s Walter Cronkite School of Journalism and Mass Communication, the Cronkite Century Celebration will honor the late “CBS Eveni...

To commemorate the 100th anniversary of the birth of Walter Cronkite, a large-scale public celebration featuring some of the nation’s top journalists will be held this fall at the Newseum in Washington, D.C.

Hosted by the Newseum, CBS News and Arizona State University’s Walter Cronkite School of Journalism and Mass Communication, the Cronkite Century Celebration will honor the late “CBS Evening News” anchor and his impact on journalism past, present and future with a series of high-profile events on Sept. 29. 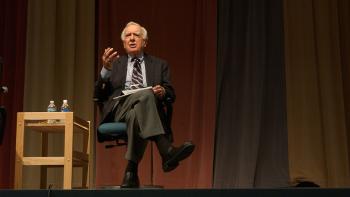 ASU's Cronkite School and CBS News is hosting a celebration at the Newseum in September to commemorate the 100th anniversary of the late Walter Cronkite's birth. Download Full Image

The day’s events will be followed by an evening panel of noted journalists, featuring “CBS Evening News” anchor Scott Pelley; CBS News contributor Bob Schieffer; “PBS NewsHour” anchor Gwen Ifill and more. They will lead a discussion on Cronkite’s influence and the future of news in the Newseum’s Walter and Leonore Annenberg Theater. Moderating the panel will be Leonard Downie Jr., former executive editor of the Washington Post, who now serves as the Cronkite School’s Weil Family Professor of Journalism.

“All news media have been transformed since Walter Cronkite left us—but his enduring values remain so important to all of us at CBS News,” said David Rhodes, president of CBS News. “Cronkite’s birthday is the perfect opportunity to reflect on what’s changed—and what hasn’t.”

In addition to the evening panel, the Cronkite Century Celebration will feature a talk earlier that day with noted historian Douglas Brinkley, the author of the acclaimed biography “Cronkite,” as well as a panel discussion with Cronkite School alumni who have graduated in the past five years.

Additionally, Don Carleton, executive director of the University of Texas at Austin’s Dolph Briscoe Center for American History, which is home of the Cronkite Papers, will talk about his book “Conversations with Cronkite” in an afternoon program.

Throughout the day, the Newseum will showcase video clips and documentaries about Cronkite in its various theaters and will present gallery talks highlighting its collection of artifacts related to the anchor.

“Whether it’s the report of President Kennedy’s assassination or man’s first steps on the moon, Cronkite’s legacy transcends the generations of visitors who come to the Newseum,” said Jeffrey Herbst, president and CEO of the Newseum. “We’re honored to join these esteemed journalists and institutions in celebrating his lasting contribution to the record of our shared history.”

The September Cronkite Century Celebration at the Newseum is just one of several events honoring Cronkite, who was born on Nov. 4, 1916.

The Cronkite School will award Pelley the Walter Cronkite Award for Excellence in Journalism at a ceremony Nov. 21 at the Sheraton Grand Phoenix hotel near the ASU Downtown Phoenix campus. The prestigious honor is presented to a leading figure in journalism who embodies the spirit and values of the legendary CBS News anchor. The school also will launch a 100-day social media campaign leading up to Cronkite’s birthday, which will celebrate his legacy.

Cronkite, known as “the most trusted man in America,” was anchor of “CBS Evening News” for nearly 20 years, from 1962-1981. Cronkite shepherded the nation through President John F. Kennedy’s assassination, the Vietnam War, the walk on the moon and the Iranian hostage crisis. Known for his famous sign-off, “and that’s the way it is,” Cronkite won numerous honors and the admiration of a country for his reporting.

In 1984, ASU named its journalism program in honor of Cronkite, who was closely involved with the school until his death in 2009. Cronkite regularly advised leadership and visited with students and faculty. He also presented the Cronkite Award for Excellence to one of the nation’s top journalists.

“Walter Cronkite’s legacy is cemented through his coverage of some of the most iconic events in American history and his commitment to educating future journalists in the time-honored values of accuracy, responsibility, objectivity and integrity,” Cronkite School Dean Christopher Callahan said. “We are excited to celebrate the life of our school’s namesake at this extraordinary event in Washington with our friends at CBS News and the Newseum.”

Headquartered in Washington, D.C., the Newseum is dedicated to free expression and the five freedoms of the First Amendment: religion, speech, press, assembly and petition. The Newseum is on Pennsylvania Avenue between the U.S. Capitol and the White House, and more than 6 million people have visited the museum and its interactive exhibits and theaters since 2008.

More details on the Cronkite Century Celebration, including a schedule and ticket information, will be shared in the coming weeks on the Newseum and Cronkite School websites.