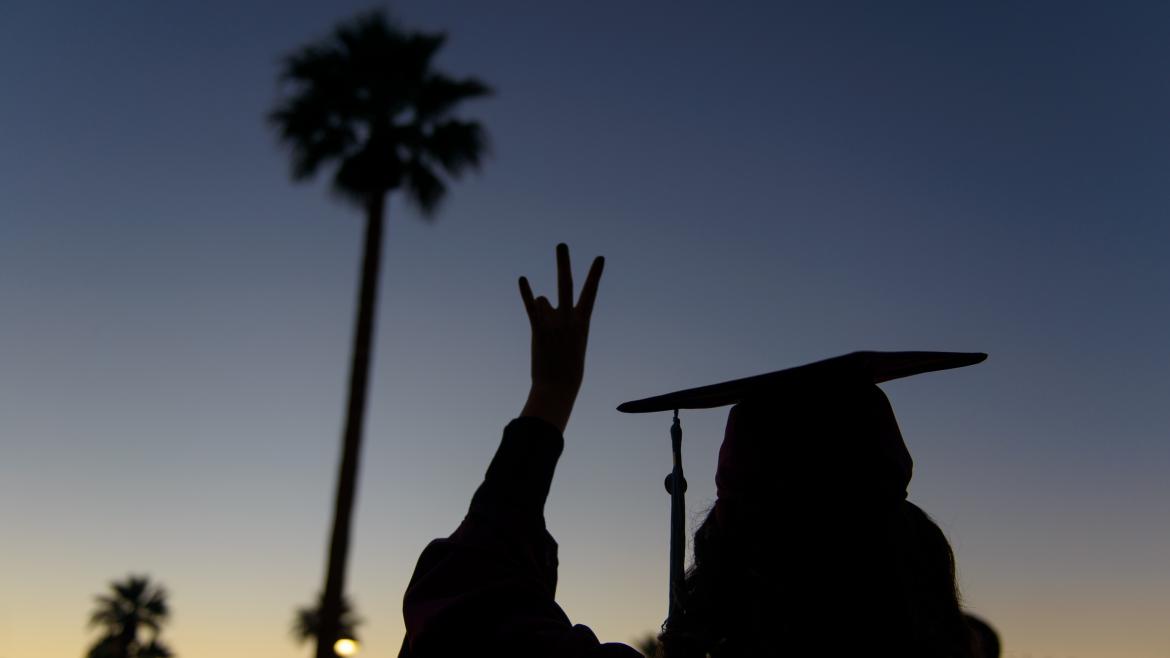 Alumni association benefits include discounts on range of products and services.
Change goes into effect this month.
July 5, 2016

ASU just made it easier to stay a Sun Devil for life. Starting this month, ASU graduates automatically receive membership in the ASU Alumni Association — no dues required.

Membership provides exclusive benefits and connection to more than 400,000 fellow Sun Devils around the world, enabling ASU students, alumni and friends of the university to create stronger professional and social networks.

The alumni association has evolved from the dues-based membership to a giving-based model, including revamped access and privileges and enhanced philanthropy toward university scholarships and programming. The levels of membership are: Member, Sparky Member, Maroon Member and Gold Member.

“Whether you received your degree a year ago, or more than a half-century ago, two things connect all of us who call Arizona State University our alma mater — shared memories and a stake in our university’s future,” said Christine Wilkinson, senior vice president of the university and president and CEO of the ASU Alumni Association. “It is through our new philanthropic membership model that, beyond membership giving, alumni will have additional opportunities to contribute — to the Traditions Fund, alumni scholarship programs, and other gifts that support and advance the mission of ASU.”

Alumni are able to make tax-deductible donations, recorded as gifts. This inclusive membership program builds ASU connections among students, alumni, and friends of the university to create stronger professional and social networks, and foster a culture of giving.

A strong network of alumni stretches across the nation and around the globe. The ASU Alumni Association informs, engages, connects and celebrates the network of alumni through activities, programs, and publications.

Contributing members — Sparky, Maroon and Gold levels — will not only experience the gratification that only giving can impart, but enjoy exclusive perks such as discounts to the ASU Karsten Golf Course and Sun Devil Campus Stores, career counseling, and exclusive alumni events.

There is an iconic simplicity to the Cape Cod Baseball League: Fans bring folding chairs and coolers, ballpark tickets are free, food selections are limited, and they don’t sell beer. The more seasoned spectators relax as they watch the young men play, and scouts hidden in the stands or near the press box diligently take notes and check stopwatches. Both groups hope to glimpse a future star befo... 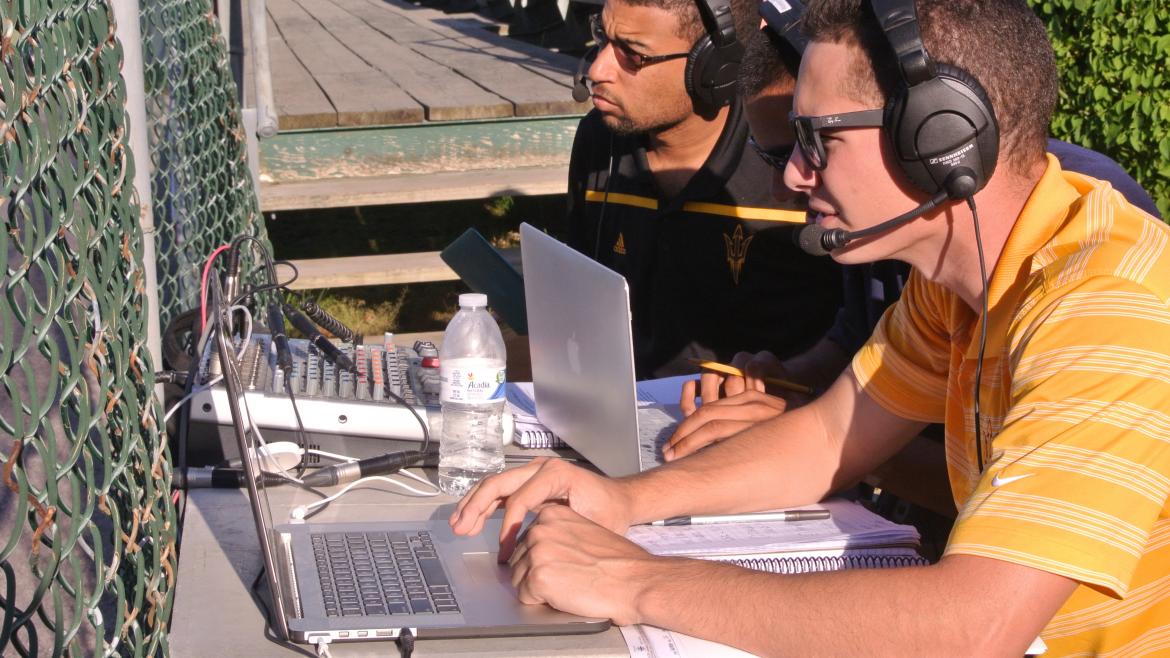 Downtown Phoenix campus
5 ASU journalism students earn internships with Cape Cod League this summer.
Many of baseball's top stars played in the Cape Cod League on their way up.
July 5, 2016

There is an iconic simplicity to the Cape Cod Baseball League: Fans bring folding chairs and coolers, ballpark tickets are free, food selections are limited, and they don’t sell beer.

The more seasoned spectators relax as they watch the young men play, and scouts hidden in the stands or near the press box diligently take notes and check stopwatches. Both groups hope to glimpse a future star before he becomes famous.

More than 1,000 league veterans have gone on to Major League Baseball, and you may have heard of some of them: Tim Lincecum, Jacoby Ellsbury, Buster Posey, Barry Zito and Nomar Garciaparra, just to name a few.

For the student broadcasters at the Massachusetts league, this is also their time to hone their skills on their way to making it big. Five students from Arizona State University's Walter Cronkite School of Journalism and Mass Communication scored internships with the league this year, the most of any university represented at the Cape for the second year in a row. Just like the players on the field, they had to prove themselves to earn their spot.

André Simms is the on-field reporter for the Wareham Gatemen. He also steps in as the play-by-play announcer and sometimes does color commentary, filling in the gap between plays with interesting information about teams and players, the overwhelming majority of whom are NCAA student-athletes keeping sharp over the summer.

“It’s a lot of work, but it’s so rewarding,” he said of his time at the Cape League. Since he landed the internship in January, he has been preparing for the job by doing research and keeping tabs on the players. 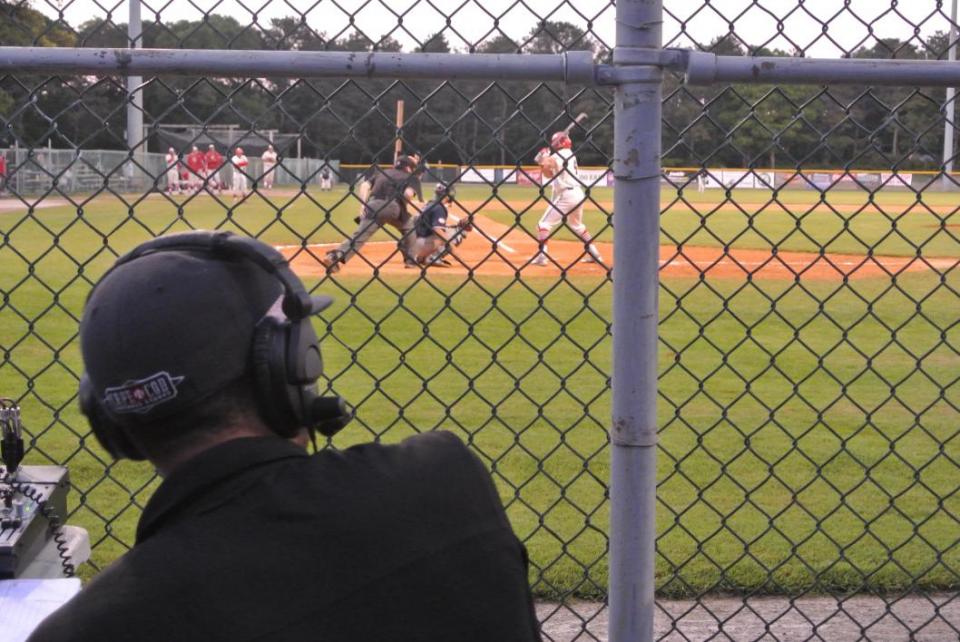 Emerging broadcasters work on their skills during a game at the Cape Cod Baseball League. For the second year in a row, the Walter Cronkite School of Journalism and Mass Communication had the most students of any college represented. Photo by Logan Clark/ASU

Simms is a rising junior who attended St. Mary’s College High School in Berkeley, California, and was attracted to Cronkite by the professionalism, state-of-the-art equipment and myriad opportunities to put his training to good use.

The students gave props to the Cronkite School for helping them prepare to be competitive and successful in sports journalism.

“In two years, I’ve been able to grow so much as a journalist and improve tenfold since I got on campus,” Simms said. “I’m getting these real-world opportunities, like coming out here on the Cape. I’ve worked for ESPN, the Pac-12 Networks, and that’s not something other schools are going to offer right away.”

He also credited ASU’s emphasis on inter- and multi-disciplinary learning as helping him grow. Simms is pursuing a theater minor, which he says helps him in sports journalism because of the need to think quickly and be flexible doing live reporting.

Jake Garcia, the play-by-play announcer for the Wareham Gatemen, is back on the Cape for his second season. He is a rising senior in the accelerated master’s program at the Cronkite School.

Garcia is also from California and was “dead-set” on attending UCLA until he received a flier in the mail about the sports journalism program at ASU. When a high school baseball tournament was rained out, he and his dad took a road trip to ASU, he took a tour and the rest is history, he said.

The deciding factor for him was the Cronkite News studio and anchor desk. He said that seeing the Cronkite School’s commitment to giving students the best, most realistic experience possible made him decide to attend ASU.

He said it was a smart decision because “I’m getting exactly what I need,” including the professional training experience both in Arizona’s largest city, but also in the support for internships including this one at the Cape Cod Baseball League.

“It’s a fantastic experience, because it’s 44 games in about 50 days,” he said about his summer job. “You can’t duplicate those reps anywhere else. It’s a grind.”

Like Simms, he has had a number of opportunities that he doesn’t think he would get at other schools, including keeping spring training stats with Time Warner, ESPNU, or FOX, calling ASU baseball games through the Pac-12 network, and an internship with Scout Media covering ASU football.

“I kind of feel like a player,” he said. “They’re trying to improve their draft stock, and I’m trying to improve my resume reel. We’re both going to end up finding ourselves in minor league baseball eventually. I’m ready for the ride.”

Top photo: The Cape Cod Baseball League is a place where young ballplayers hone their skills, but emerging broadcasters such as Andre Simms (left) and Jake Garcia get practice, too. Photo by Logan Clark/ASU