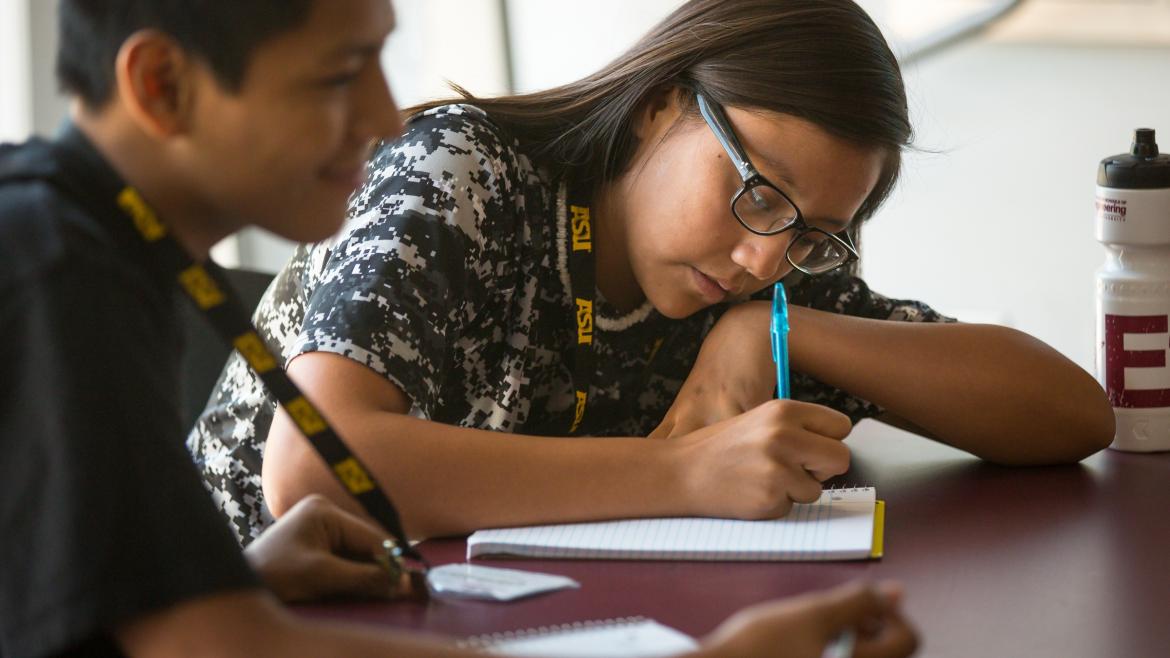 Carla Todecheenie was not going to let anything prevent her daughter Hannah from attending Arizona State University’s Inspire camp this week.

Not financial issues. Not car troubles. Not a crippling heat wave. Not even an interstate pile up that sent her and Hannah on a five-hour detour through an Arizona forest.

She was that determined, and now Hannah (pictured above), along with 79 other Native American youth, is getting a first-time look at life on a college campus.

So far Hannah likes what she sees.

“I like how everyone is open, outgoing and kind. It’s a very creative atmosphere,” said the 14-year-old high school freshman. She traveled about 280 miles from Chinle, Arizona, with her mother and carpooled with another family to ASU’s Polytechnic campus, the host site of Inspire.

“I’m here because I want to get a jump on my career and not fall behind in my life.”

That’s the idea behind Inspire, an inaugural Native American youth camp designed to be a fun, holistic experience that helps build college readiness and a new pathway to ASU. 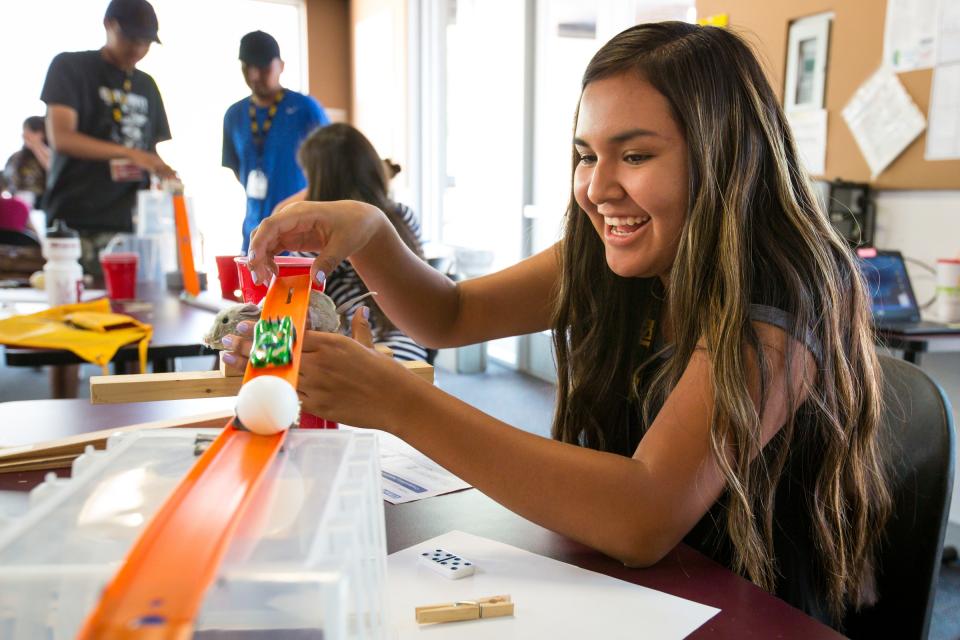 Shalee Allison, 15, tests the STEAM Machine her group made at the Inspire program on the Polytechnic campus on June 21. Her group started with a Hot Wheels car, which struck a ball, which pushed a pipe-cleaner figure down a slide. STEAM (science, technology, engineering, art and math) machines tell stories through chain reactions, much like a Rube Goldberg machine. Photo by Charlie Leight/ASU Now

“Our hope is what they get out of this experience is the opportunity to know they belong on a college campus,” said Jacob Moore, assistant vice president of tribal relations in the Office of University Affairs. “For many of them, this is the first time they’ve visited a college from a rural reservation community. We want them to see ASU as a place that’s not only welcoming but where we want to see them thrive.”

Inspire is geared for a diverse group of students from different tribes, locations and grade levels (9-12), at no costInspire is sponsored by a $65,000 grant from the Arizona Community Foundation to ASU’s University College, with support from the Office of American Indian Initiatives and American Indian Student Support Services. to participants, explained the program's director, Jeanne Hanrahan, University College's director of community outreach.

Duane Roen, vice provost of the Polytechnic campus, said the site is the perfect place to host the camp.

“We want everyone to see the beauty of the Polytechnic campus and all that it has to offer,” said Roen. “I love the architecture. I love the desert landscaping. I love the sense of community here. I make no bones about it, Poly is my favorite campus.” 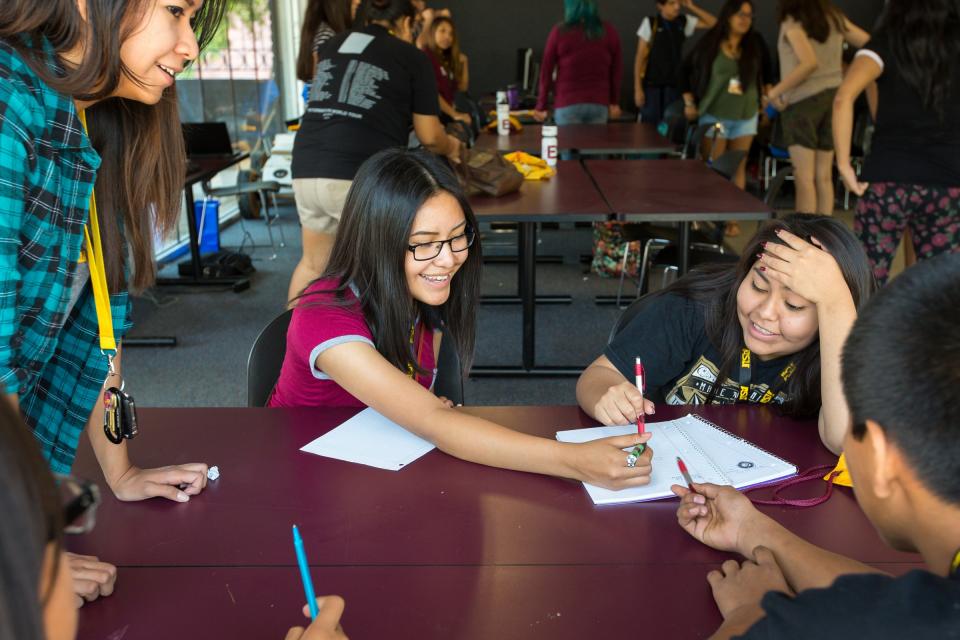 Teri Noland, 15 (left), and Binita GreyBull, 15, come up with ideas to create a STEAM Machine at the Inspire program on the Polytechnic campus on June 21. Photo by Charlie Leight/ASU Now

One of the faces the 80 campers will get to know throughout the week is Lyonel Tso, an environmental science teacher at Central High School in Phoenix. Tso is a member of the Navajo tribe from LeChee, Arizona, and will be conducting a science-engineering activity on the Valley’s urban heat-island effect on the ecosystem.

“It’s important for Native American students to see a person of color as a teacher,” Tso said. “When you see someone you identify with, you immediately build a connection with them. They have it in mind they could be in my place one day.”

Klain Benally, a 19-year-old peer student who is an American Indian Studies major and a Navajo, said Native American youth have many cultural and social hurdles to overcome when transitioning from high school to college.

“There is a culture shock, no doubt about it,” Benally said. “Back home on the reservation, students are more in touch with their culture and community and know how to access resources. Homesickness will be one of the biggest hardships as well as being considered a minority in the big city. One of our goals is to teach students about college, the steps they need to take, and how to connect with one another once they are here.”

For 15-year-old Owen Lee, who drove from Gallup, New Mexico, with his grandparents Louise and Thomas Billie, he believes making that transition won’t be hard for him. He’s fairly well-traveled for a teen, has resided in several states and visited at least three college campuses. So far he’s leaning toward ASU.

“My uncle attended ASU, and he’s a person I look up to,” Lee said. “I’m leaning towards criminology. I’d like a career with either the state police, border patrol or the FBI.”

After this week, Lee and the other campers may consider a career in writing. At the closing ceremony on Saturday, students will read their writings and come out of the program as published authors in an online teen journal being launched by Red Ink, an international journal of indigenous literature, arts and humanities.

“How cool is it to say you’re a published author as a teen?” said ASU English professor James Blasingame, who was a writing instructor at the camp and will lead the open mic night. “I think it’s fantastic.”

Top photo: Hannah Todecheenie, 15, of Chinle, Arizona, starts writing ideas to create a STEAM Machine at the Inspire program on the Polytechnic campus on June 21. Photo by Charlie Leight/ASU Now

ASU Insight: Should we bury the Minsk Agreement?

June 22, 2016Besieged by the Kremlin’s occupation of Crimea and ongoing aggression in the East, Ukraine is simultaneously weakened by a failure of the ruling elite to tackle corruption. Western leaders have also fallen short in providing vital military, diplomatic, or economic support. Practical anti-corruption measures have yet to be leveraged against Ukrainian figures, while sanctions against ...

ASU Insight: Should we bury the Minsk Agreement? 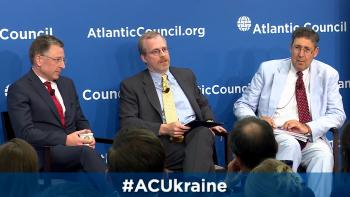 Besieged by the Kremlin’s occupation of Crimea and ongoing aggression in the East, Ukraine is simultaneously weakened by a failure of the ruling elite to tackle corruption. Western leaders have also fallen short in providing vital military, diplomatic, or economic support. Practical anti-corruption measures have yet to be leveraged against Ukrainian figures, while sanctions against the kleptocratic Putin regime and its cronies remain tied to the flawed Minsk agreement.

Attacked by Putin, let down by their own leaders, and shortchanged by the West, the Ukrainian people have nevertheless continued to fight for a free, sovereign, and democratic future.