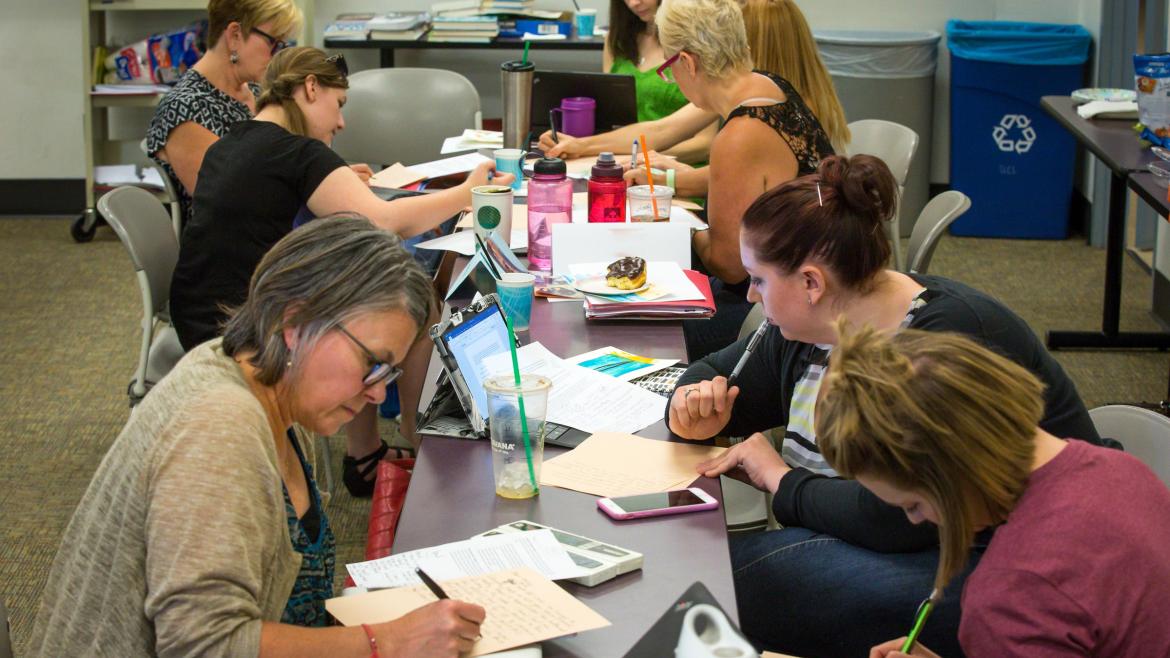 Making the case for arguments

Some of the most significant turning points in history began with a compelling argument.

Clearly the ability to express one’s opinion in a thoughtful, well-constructed manner is a powerful thing. That fact that has been further proven by a recent National Writing Project (NWP) study that found introducing argumentative writing curriculum into schools improved teaching results.

So for two weeks in June, 22 middle and high school teachers from throughout the greater Phoenix area convened at Arizona State University’s Tempe campus for the Central Arizona Writing Project 2016 Invitational Summer Institute to focus on improving their argument-writing teaching skills.

Supported by a NWP College Ready Writers Program grant, the institute is unique because it allows local teachers to experiment with a research-based teaching model while collaborating with ASU professors, past and present doctoral students, and each other.

“They get to come here to participate in workshops and work together as a professional community of writers,” said Jessica Early, co-director of the program with Christina Saidy. Both Early and Saidy are also ASU English professors.

During a workshop led by Saidy on June 16, teachers huddled together in small groups, listening to what each had written for a hypothetical podcast. Afterward, they took a few minutes to write letters to one another detailing what they liked and what needed work. Then they read their letters aloud, listened, took notes and asked for clarification.

In effect, they were demoing a lesson they could incorporate in their own classrooms. 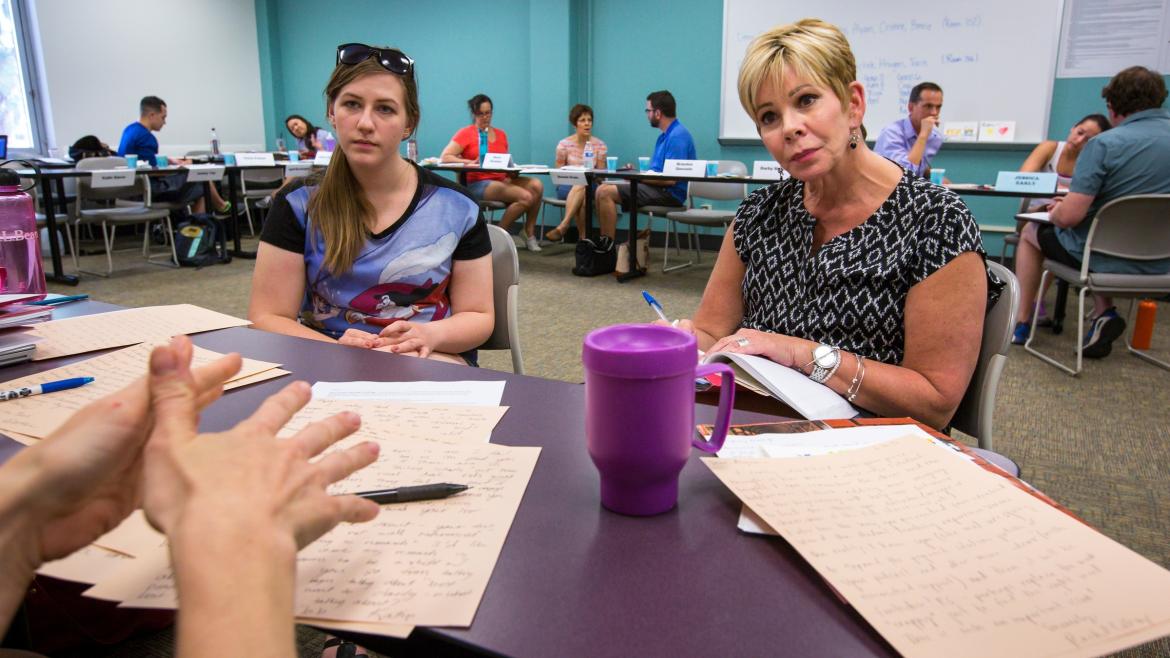 When they went home after the workshop, their “homework” was to rewrite and record the podcast based on the feedback they received.

“This thing we’re doing right now — this peer editing — is something I adopted from a previous class I took with Dr. Saidy that I have my students do now. And it’s revolutionized the way they edit and revise their work,” said Tricia Parker, who has taught 10th- and 11th-grade English at local schools.

That may be because the way students have been “peer editing” each other’s work isn’t nearly as effective. As Saidy explained to the class, “This is something that has been documented in schools. Students aren’t really reading each other’s writing.”

Instead, they’re simply filling out checklists — not expressing what they like or don’t like, not asking how they can improve, not having an actual, engaging conversation about their writing.

Cindy Glick, who teaches English and creative writing at Compadre Academy in Tempe, said the methods she has learned in the workshops help to make argumentative writing “more interesting, more attainable and more relevant” for her high school students.

According to Mesa Westwood High School 10th-grade English teacher Katie Garza, the workshop content is relevant for teachers, too.

“Everything we do in here as writers, as teachers of writers, is something we can do in the classroom with our kids,” said Garza. “Every single thing.”

That being the goal, a part of the day is set aside solely for the teachers to prepare lesson plans and units for the upcoming school year based on the day’s exercises.

And they aren’t just taking lessons from a single source; they’re learning from each other.

Steven Arenas, who participated in the institute last year as part of the requirements for his master’s in English education at ASU, now teaches at Alhambra High School in Phoenix. He came back to participate in the institute again this year, this time as a facilitator.

“My favorite part has been breaking up into groups and being able to listen to other teachers present their demo lesson and how they teach writing in their classrooms,” he said. “So I get to learn more and steal some ideas for them.”

As the institute came to a close, many of the teachers were looking ahead to the upcoming school year with a sense of gratitude and appreciation for the experience.

“It’s been really helpful building these argument units that we’re going to take back to our classes this fall,” said Anthony Colaya, who teaches English at Dobson High School in Mesa, “and it’s been great being a part of this community of teachers working together.”

Narayanan Neithalath’s strides in research to improve the design and development of sustainable infrastructure and construction materials have been earning international attention in his field.The latest recognition for the professor in the Ira A. Fulton Schools of Engineering at Arizona State University comes from the American Society of Civil Engineers (ASCE), which has awarded him a Walter L....

Narayanan Neithalath’s strides in research to improve the design and development of sustainable infrastructure and construction materials have been earning international attention in his field.

The latest recognition for the professor in the Ira A. Fulton Schools of Engineering at Arizona State University comes from the American Society of Civil Engineers (ASCE), which has awarded him a Walter L. Huber Civil Engineering Research Prize. 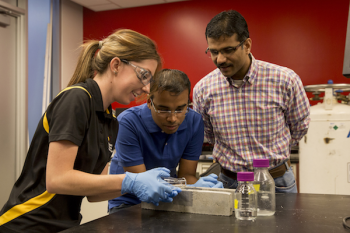 Neithalath is making particular progress with new materials and methods for producing more durable cement and concrete. But his efforts span across a wide range of the physical, chemical and mechanical aspects of these materials, as well as the environmental impacts of their production and use over their life spans.

He is “one of the rising stars in the emerging areas of new and novel civil engineering materials, contributing greatly to the body of knowledge in this area,” said professor G. Edward Gibson Jr., director of the School of Sustainable Engineering and the Built Environment in the Fulton Schools.

Gibson and Fulton Schools' ASU Regents’ Professor Edward Kavazanjian point to Neithalath’s work to better understand the microstructures and properties of the materials as a fundamental step to developing stronger cement and more resilient concrete, and to designing more effective performance testing of the building materials.

Beyond that, they note Neithalath’s efforts to make cementless binding systems that could replace conventional Portland cement in many applications and thus significantly reduce the environmentally harmful greenhouse gas emissions produced by standard cement.

They also highlight Neithalath’s collaboration with industry to put his research findings into practice and his outstanding performance as a teacher of civil, environmental and sustainable engineering and as a mentor to students.

Other colleagues who nominated him for the Huber Prize described his work as creative, pioneering and potentially groundbreaking.

His research accomplishments have attracted funding from the U.S. Department of Energy, the Department of Transportation and the National Science Foundation (NSF), in addition to support from industry.

In 2008, he won an NSF CAREER Award, which is given to young scientists and engineers who demonstrate the potential to become research and education leaders in fields considered important to national interests.

Last year, he led a multi-university research team whose proposal was one of 10 from among about 100 submissions selected for funding from the European Commission’s Infravation program, which aims to make breakthroughs in sustainable transportation technologies and infrastructure.

Neithalath will be officially presented the Huber Prize in Portland, Oregon, in September as part of the ASCE’s annual conference. The organization represents more than 150,000 members of the civil engineering profession in 177 countries.