In the past 10 years, Latino undergraduate enrollment at ASU has almost doubled. University student outreach efforts have played a key part in educating parents, first-generation students and transfer students about the resources available to them. This also includes supporting alumni and the quest to impart wisdom to a younger generation of Phoenicians.

Traveling north from Maryvale, a suburb in metro Phoenix, 150 students from 20 local high schools poured into ASU’s West campus in late May, ready to find out what it’s really like to be a Sun Devil for an entire week. 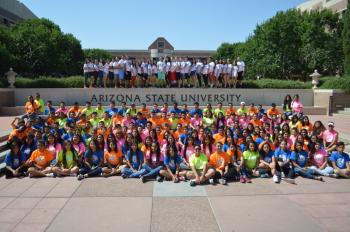 They had arrived at Camp Catanese, a summer camp hosted at ASU by Camp Catanese founder Jason Catanese to educate students about the benefits of pursuing a post-secondary education. The camp is a weeklong STEAM (science, technology, engineering, arts and mathematics) and college-access experience for high school students. Campers spend a week learning about college and participating in labs, sports, team-building activities and social events.

Catanese, a former Sun Devil, is a Teach for America teacher at Pueblo Del Sol Elementary School in the Isaac Elementary School District, a low-income community in Phoenix. He hopes that through this camp, students’ dreams of going to college are reinvigorated.

Although there was time to play sports, learn about the sciences and arts, and relax during downtime, there was also one special moment dedicated to getting campers excited about college.

Guest speaker and ASU associate professor Erika Camacho in the School of Mathematical and Natural Sciences in the New College of Interdisciplinary Arts and Sciences shared her story about the struggle and the dedication it took for her to succeed as a Latina living amidst poverty and violence in East Los Angeles. She went to poverty-stricken Garfield High School and was an alum of the famous math teacher Jaime Escalante, portrayed by Edward James Olmos in the 1988 film "Stand and Deliver." 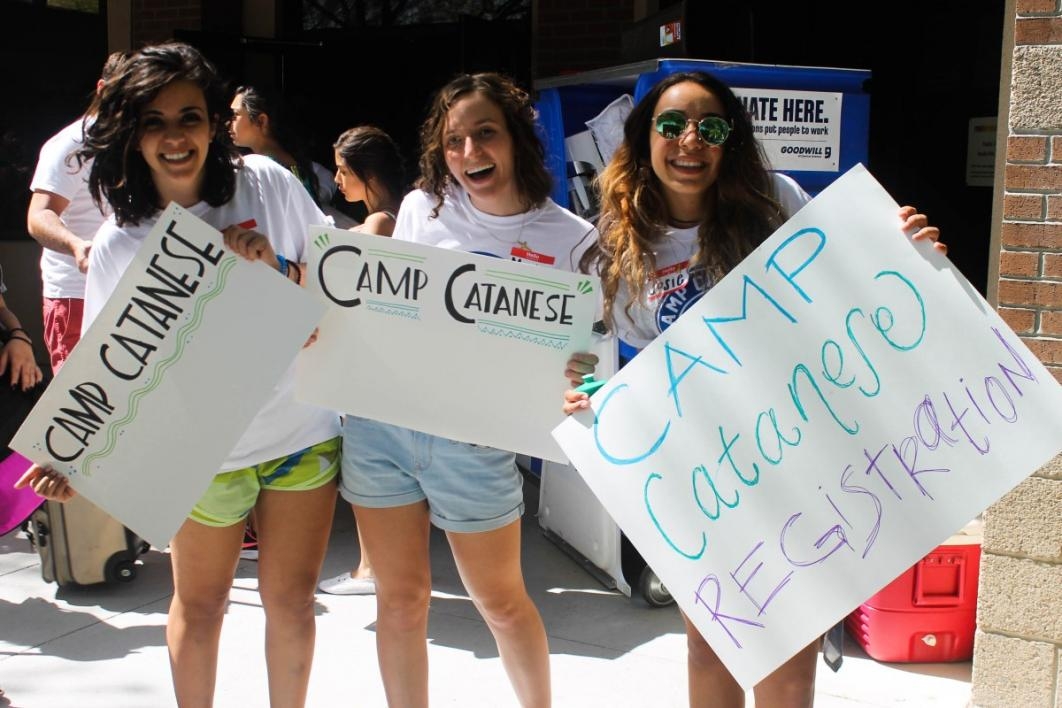 Camp staffers Hibbah, Maria and Josie greet campers as they arrive on campus May 22. 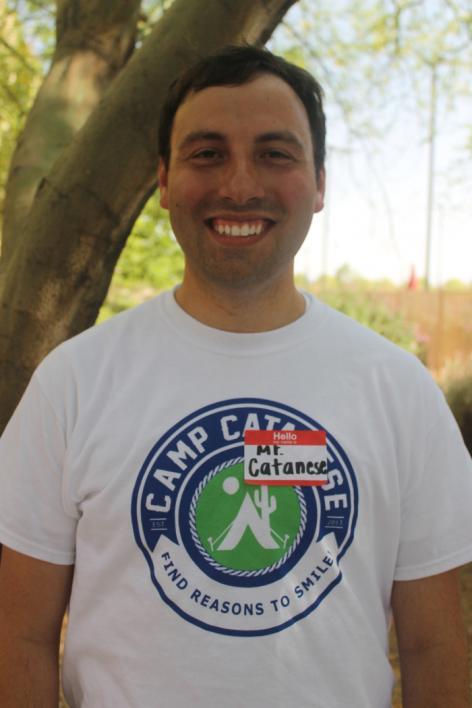 Camp director Jason Catanese put the camp together as a way to educate kids on how to get to college and then give back to the community and people who helped them succeed. 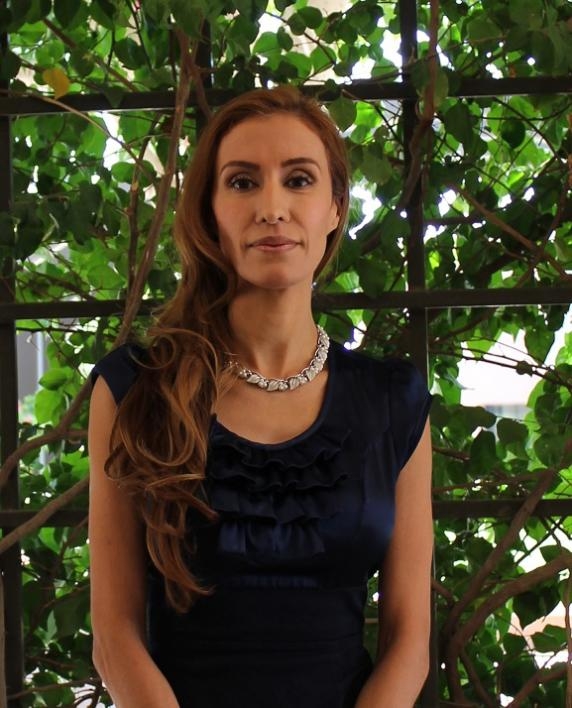 Dr. Erika Camacho, associate professor in the School of Mathematical and Natural Sciences at ASU's West campus, talked to campers and encouraged them that with perseverance, anything is possible.

“One of the things that I want you to walk away with today is, don’t let anyone tell you what you can do and what you cannot do. You’re the only one that can say what you can do,” she told campers.

During her climb to success, Camacho found mentors and people who believed in her, but she also encountered discrimination. This fueled her determination to prove to her naysayers, and herself, that she was intelligent, qualified and capable of overcoming stereotypes despite the cards life had dealt her.

Camacho encourages students to take a class with her at the West campus, saying, “My reviews might not be the best ones, because I am tough. I will expect the best, but I will give you the best from me.”

She challenged the mostly Latino audience in an effort to make students set high standards for themselves and strive to be the best.

“I understand where you come from, but I will train you,” Camacho said. “I’m like the military; I’ll break you and then I will make you.”

She shared her story of growing up in California, the anger that fueled her perseverance, her college experience at Wellesley — being different and not fitting in — and her teaching job at the Massachusetts Institute of Technology, all along the way breaking barrier after barrier for female minorities in STEM.

Camacho closed her inspiring lecture by highlighting the diverse population of counselors, professors and staff at ASU, a resource that other universities may not have. At ASU, Latino students can find people who can relate to them — important to students who, for the first time, will leave their mostly Latino community and will be out of their comfort zone when they attend college, she said.

Catanese said that during the weeklong camp, many kids said they hadn’t had a lot of hope for going to college before now, but all of that has changed.

“They actually know there are resources for them, there’s financial aid for them, there’s people that want to help them,” he said. “It doesn’t matter if your family makes $14,000 a year or $60,000 a year. What matters is that you have a dream and you follow that dream.”

Catanese plans on holding the camp again next year, inspiring more students to pursue their dreams and go to college.

When Jean Makin began working at the ASU Art Museum in 1989, the print collection consisted of just under 1,500 works on paper. Today that number is approaching 7,000.“From the beginning, it was really hands on with the collection,” said Makin, who is retiring from the art museum after 27 years as curator of prints.Makin began her arts career as an assistant registrar at the University of Iowa...

When Jean Makin began working at the ASU Art Museum in 1989, the print collection consisted of just under 1,500 works on paper. Today that number is approaching 7,000.

“From the beginning, it was really hands on with the collection,” said Makin, who is retiring from the art museum after 27 years as curator of prints. 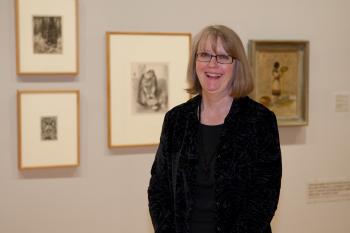 Makin began her arts career as an assistant registrar at the University of Iowa Museum of Art before moving to Arizona, where she worked as the registrar at the Phoenix Art Museum for more than three years.

The ASU Art Museum’s collection of works on paper, which includes artists from Dürer to Warhol, was a huge draw for Makin, who has an MFA in printmaking from the University of Iowa. She was hired as the museum’s first assistant curator of prints.

In the early years at the museum, she helped establish the facility at the Nelson Fine Arts Center, physically moving artwork from Matthews Center, where the museum was originally housed. Then came the task of cataloguing the work, which suited Makin well given her previous experience as a registrar. 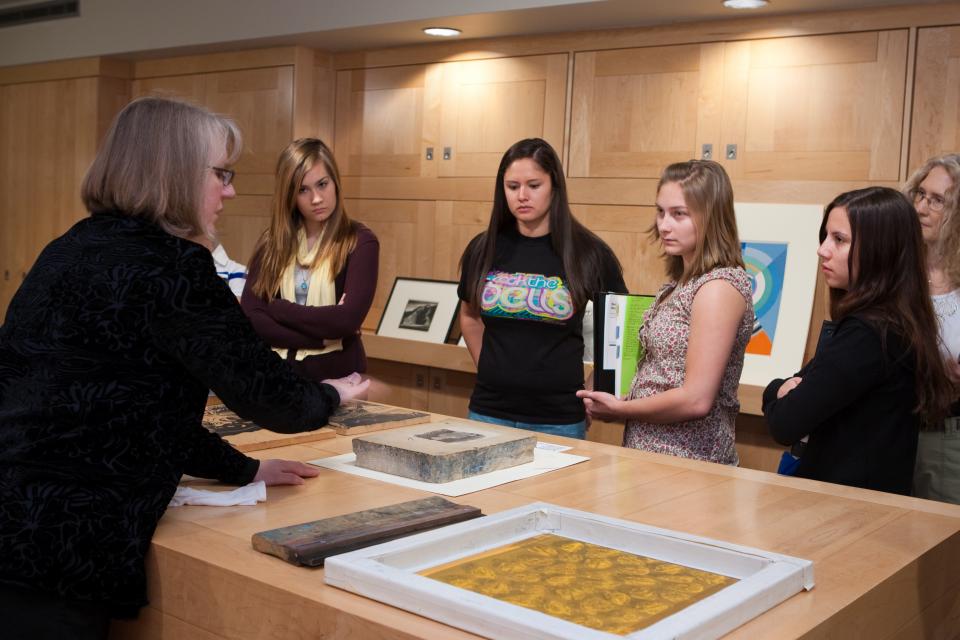 But ultimately, she said, the most gratifying part of the job came in her interactions with students, whether it was a larger class or an individual intern, in the Jules Heller Print Study Room.

“There have been numerous classes that have worked on specific aspects of the collection, researching and writing text that later is used in an exhibition,” Makin explained. “The students are engaged directly with the curatorial process, which is quite different from standard research for a hand-in paper. And they saw their work in the gallery — how many students can claim they created an exhibition?”

Melissa Button, an instructor in the ASU School of Art, regularly brought her classes to the print room to work with Makin.

“I cannot properly express how much I have appreciated and benefited from [Makin’s] endless knowledge and continuous desire to educate the students,” said Button. “[Makin] will not be soon forgotten, as [her] words and enthusiasm for prints will carry through my teaching for many years to come.”

Several of Makin’s former interns said their experience with Makin and the ASU Art Museum’s print collection was formative for them.

“Jean Makin is a gem and a real asset to the arts community,” says Laura Wilde, a former intern who graduated in 2014 with a bachelor in art history from the School of Art and who now works as the outreach and volunteer coordinator at the Phoenix Center for the Arts. “Her vast knowledge, experience and kindness helped me so much while I served as an intern at the ASU Art Museum print department, as I'm sure it helped many others. Her guidance helped me start my arts career.”

While interning at the museum, Emma Ringness’ research with the collection developed into a full-blown exhibition titled “Plate, Silk, Stone: Women in Print” (2013).

“Jean has an incredible wealth of knowledge both in art history and art making,” said Ringness, who graduated in 2013 with a degree in printmaking. “So much of what I learned during my time as an intern in the print study room was not from the research I conducted, but from my conversations with Jean.”

Throughout the years, Makin wore many hats (often simultaneously), from personnel manager to graphic designer, leaving an immeasurable impression on the museum itself. But her legacy extends even farther, to the larger ASU community and beyond.

“Jean has been central to the museum’s mission for over 27 years, and her commitment and expertise is shown through her amazing history of exhibitions and the building of the phenomenal print collection,” say ASU Art Museum Director Gordon Knox. “Thousands of students, academics and members of the public have come to know and love the print collection thanks to Jean’s hard work.”

Makin’s final exhibition at the museum, “The Brandywine Workshop Collection,” includes work from a satellite collection of prints that the ASU Art Museum received from the Brandywine Workshop in Philadelphia in 2015 and features artists such as Betye Saar, Tomie Arai and Willie Birch. The show will be on view July 5 through Dec. 17.