“Philip Glass and I will begin a conversation that I hope you might join,” he wrote in the program for that performance, introducing their orchestral and cinematic collaboration that was produced in part during Roumain’s artist-in-residency at ASU that spring. “I wanted this concert to be about many things; film, the orchestra, etudes, hip-hop and dialogue. A town hall meeting for curiously strong minds and fresh, brave souls.” 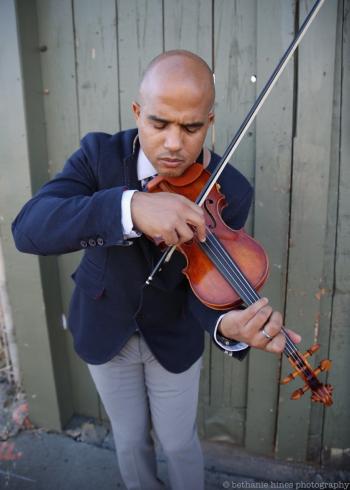 Violinist/composer Daniel Bernard Roumain will join the Herberger Institute for Design and the Arts and ASU Gammage as Institute Professor. Download Full Image

That conversation will continue at ASU in fall 2016, when Roumain will join the Herberger Institute for Design and the Arts and ASU Gammage as Institute Professor, where he will act as a professor of practice.

He is the third Institute Professor to be named, along with dance legend and MacArthur “Genius Grant” Fellowship recipient Liz Lerman and founding director of the Sojourn Theatre and the Center for Performance and Civic Practice Michael Rohd.

Together, the multidisciplinary artists will grow ASU’s Ensemble Lab, a think tank for artistic experimentation and community interventions where Institute professors are encouraged to work together to advance national initiatives and collectively redesign arts and design education so it is at the center of public life. The lab was started in the spring of 2016 by Lerman with the support of Herberger Institute Dean Steven Tepper.

“Daniel is a national leader in the arts who is known for collaborating across art forms, connecting to new audiences and demonstrating how an enterprising musician works in the 21st century,” said Tepper. “He will be an incredible mentor to students, an ambassador in the community and a thought leader for the Herberger Institute, ASU Gammage and the university.”

Like Lerman and Rohd, Roumain’s work frequently extends beyond the limits of genre. Known for his signature violin sounds infused with myriad electronic and urban music influences, DBR (as he is often called) takes his genre-bending music beyond the edge of the stage. He has been nominated for an Emmy Award for outstanding musical composition for his work with ESPN, featured as keynote performer at technology conferences and has composed music for an array of solo performers, chamber ensembles, orchestras, dance works, television and film.

Roumain made his Carnegie Hall debut in 2000 with the American Composers Orchestra performing his “Harlem Essay for Orchestra.” He went on to compose works for the Boston Pops Orchestra, Carnegie Hall, the Library of Congress, the Stuttgart Symphony and myriad others. He holds a doctorate degree in music composition from the University of Michigan.

An avid arts industry leader, Roumain serves on the board of directors of the League of American Orchestras, Association of Performing Arts Presenters (APAP), Creative Capital, the advisory committee of the Sphinx Organization and was co-chair of 2015 and 2016 APAP conferences.

Roumain is working on a new solo violin work for acclaimed violinist Rachel Barton Pine and continues work on “We Shall Not Be Moved,” a chamber opera commissioned by Opera Philadelphia and co-produced by the Apollo Theater.

At ASU, Roumain will teach courses that focus on translating personal accounts into creative expression and on the complex artistic, social and cultural impact of artist/activists. His classes will be open to musicians, artists, designers and other interested students. In his joint appointment with ASU Gammage, he will develop artistic projects that extend and expand his creative work and its connections with the community.

He will also serve as an adviser to the dean of the Herberger Institute, including developing the Projecting All Voices initiative on how to align the nation’s largest comprehensive arts and design college with the experiences, aspirations and values of a new generation of Latino, indigenous and African-American artists.

“I have been performing, creating and collaborating with the ASU and surrounding communities for over 15 years,” said Roumain. “The relationships here have always been collaborative, deeply profound, and speak to the need and vitality of our performing arts within our daily lives. I look forward to becoming part of the ASU family of thinkers, teachers, makers and creators."

Listen to audio from DBR's 2005 performance with Philip Glass here.

Have you ever received a text message in which the sender's tone was unclear? That’s because crucial pieces of information are missing to fully understand the message.Gestures and body language are important parts of speech that can’t be conveyed in the text- and speech-based input dominating today’s human-computer interfaces.People who rely on text-based communication systems, such as thos... 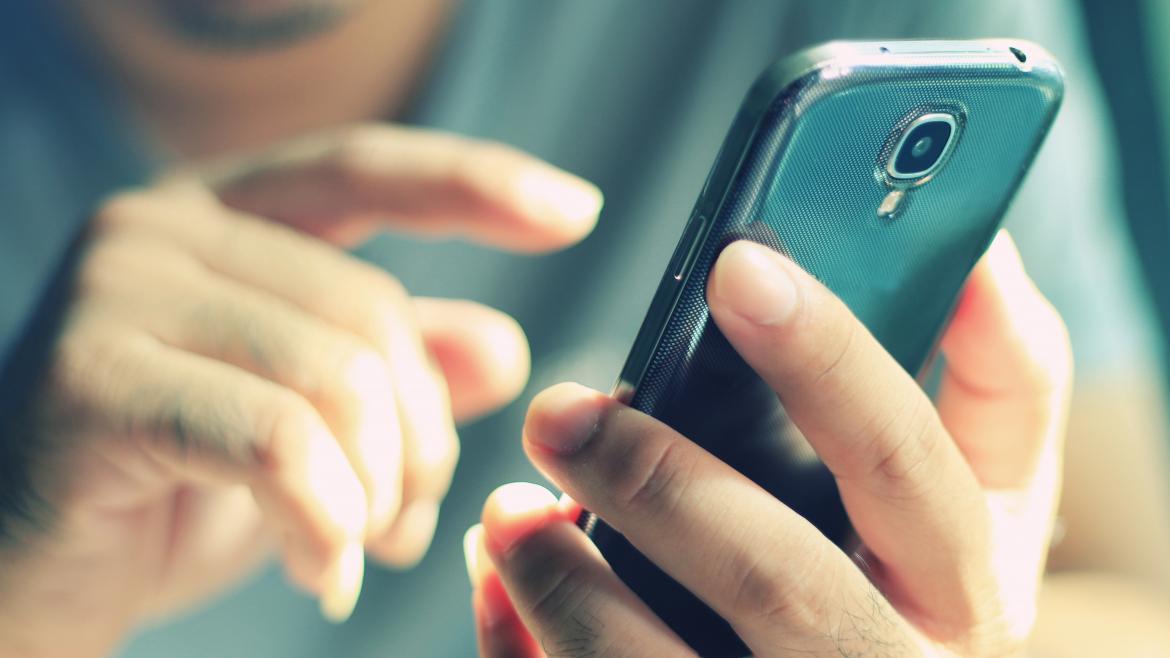 Have you ever received a text message in which the sender's tone was unclear? That’s because crucial pieces of information are missing to fully understand the message.

Gestures and body language are important parts of speech that can’t be conveyed in the text- and speech-based input dominating today’s human-computer interfaces.

People who rely on text-based communication systems, such as those with hearing impairments, but who also have fully expressive communication systems like American Sign Language (ASL) could benefit from machine interfaces that can understand gestures as well as spoken or written words.

To address this need, computer science doctoral student Prajwal Paudyal is working on SCEPTRE in the iMPACT Lab. SCEPTRE is a smartphone interface that uses two wireless armband sensors to take in ASL sign gestures to communicate via computer systems.

“The ASL user trains the system by performing three iterations of a gesture, which is captured by a smartphone,” Paudyal said. “The data is then sent to the server to train a computer model. Later, when the user needs to use the system, she puts on the wireless armband sensors and performs the gesture, which is recognized in the smartphone, in a fog server or from the server, depending on communication channels.”

Finding a computing need and solving it

Paudyal became interested in working with technology to assist ASL users when he started his research for human-computer interaction using mobile devices to redefine the way people interact with machines.

“I quickly realized that having a syntactic language to interface with machines is very important. I started looking into sign languages because they are completely defined languages with full expressibility and flexibility. I started taking ASL classes myself and had the opportunity to interact with people who are deaf as well as with numerous users of ASL.”

He decided to continue on with this work for his doctoral research project because of its potential to help people.

“The immediate impact of this type of research on the real world and the potential increase of quality of life it promises to bring brought me a sense of fulfillment, and thus I decided to stick with this line of research for my PhD dissertation,” Paudyal said.

For his research efforts so far, Paudyal received the Spring 2016 Graduate and Professional Student Association (GPSA) Outstanding Research Award, which recognizes ASU graduate and professional students who exemplify excellence in research and development. Students are judged on the interdisciplinary character of their projects, the positive impacts on the community and the outstanding contribution of the research, among other factors.

“He earned the GPSA award because his research is an interdisciplinary project that combines computer science (the Internet of Things and human-computer interaction), linguistics and speech and hearing science,” Gupta said. “It reflects that he is doing impactful research on a complex problem that involves knowledge from various fields. This kind of use-inspired research cannot only solve immediate problems but also spur fundamental research questions.”

Paudyal is thankful for the recognition he has received and said it inspires further commitment to his work.

“Receiving the Outstanding Research Award has helped me solidify my commitment to research and to the field,” Paudyal said. “The acknowledgment and support I get from peers, other researchers and the graduate community in general at ASU helps me stay focused and inspires me to do more.”

A love of discovery makes a good researcher

Paudyal said he owes his skill as a researcher to his desire for discovery and sense of curiosity.

“I like being on the cutting edge and discovering things for the first time,” Paudyal said. “In my ‘other life’ outside of the research lab, I am a photographer and an adventurer, and I like discovering new places. I think this curiosity and sense of adventure helps me a lot as a researcher because research to me is the ultimate intellectual adventure.”

He also enjoys documenting his life by writing blogs and marking trails at the places he explores to guide his future excursions and to learn as much as he can. His meticulous approach also helps him in documenting his research.

“I have a similar attitude about documenting a lot and staying vigilant when I conduct research,” Paudyal said. “This has helped me grow as a researcher because I can constantly reevaluate my approaches and improve my process. I think this vigilance more than anything else is what makes me a good researcher and has put me on an upward spiral of improvement.”

Continuing to help the world through accessibility research

Paudyal has taken his research beyond the lab to apply his work in ways that can help those who need more accessible communication options.

He and his colleagues submitted a grant to the National Institutes of Health that aims to do a usability study on emergency health-care scenarios for people with hearing and speaking difficulties.

He also is actively involved in ASL and deaf clubs around the Phoenix metro area.

Next, Paudyal plans to extend his research in two key areas to improve its practical and theoretical applications.

“First I want to incorporate fingerspelling, which is what ASL users use if there is no word equivalent in the ASL dictionary," Paudyal said. "I am also focusing on the theoretical background for sign language and gesture processing to see if I can make contributions in the theoretical realm as well as the practical realm.”

After he earns his doctorate he hopes to find a position that allows him to continue his research in accessibility, particularly music therapy and sign language processing.