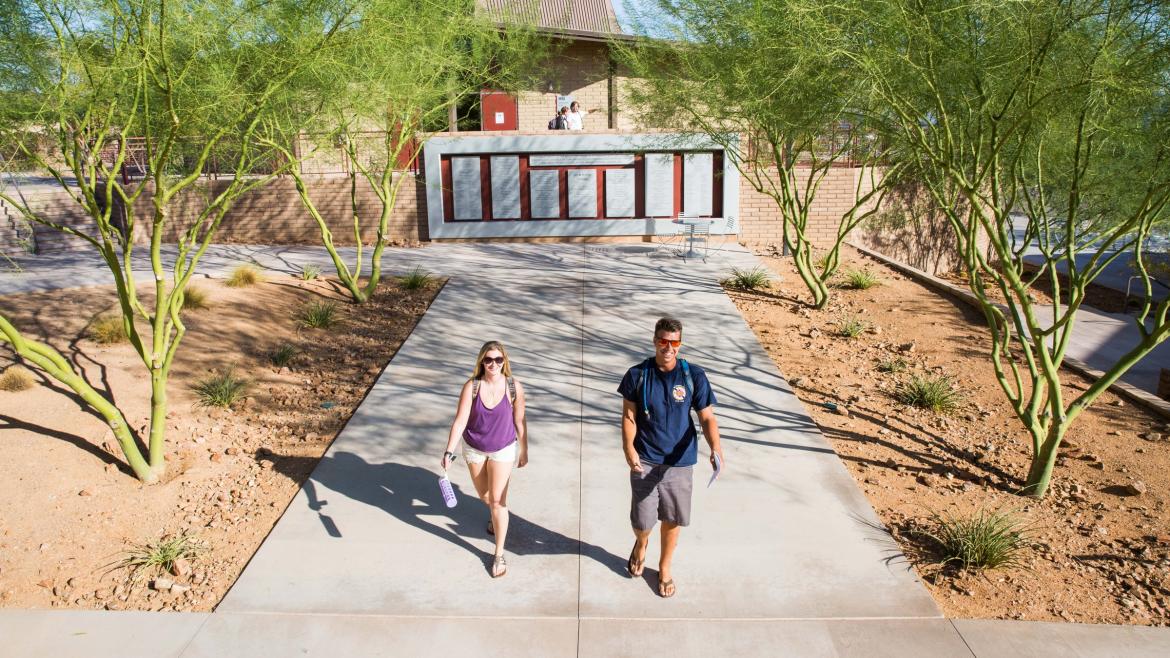 Twenty students will be handed diplomas at the convocation ceremony Saturday, May 7 — the largest graduating class yet. Eight graduates will be the first to have spent all four years of college at Havasu, which was established in fall 2012.

The colleges offer an affordable option for in- and out-of-state students who are seeking a private-school, small-campus feel. 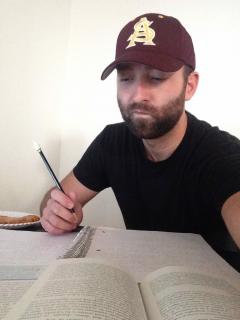 “We are a small school, and we are entirely focused on students who want a personalized education and teaching,” said David Young, director of the ASU Colleges of Lake Havasu City. “Anyone can be successful here, students can find themselves and it is gratifying to watch these students be prepared for the real world.”

Robert Lynch (pictured at right), who is graduating with a biology degree with an emphasis in environmental science, said he came to Lake Havasu planning on completing a bachelor’s degree, but with the guidance of his professors here, realized he could do more.

“The small campus size helped me focus on my studies, get to know my professors and establish good friendships,” Lynch said.

Lynch made a total switch from a career in banking to a degree in biology. He plans to pursue his master’s this coming fall and eventually his doctorate.

Students are encouraged to explore their academic interests within the 18 degree programs available at Lake Havasu and apply their knowledge to engaging and problem solving in the local community. 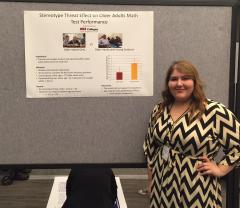 “My favorite experience was being pushed out of my comfort zone and having my work recognized by my professors. That encouraged me to develop my idea for my capstone and present my work at the Western Psychology Association Convention in California,” said graduating senior Yesenia Ramirez (pictured at the convention at left), who is graduating with a degree in psychology and plans on pursuing a master’s in social work.

Both Ramirez and Lynch will be speaking at their convocation ceremony.

“I think a lot of people wondered why I decided to stay within the town I grew up in. Attending ASU Havasu has allowed me to remain connected to my community and allowed me to explore my interest in social work right here,” Ramirez said.

The meaning behind the regalia of commencement

Arizona State University may be ranked No. 1 in the nation for innovation, but when it comes to graduation, it goes medieval. Consider this: The leaders of an institution of knowledge march in behind someone carrying a fearsome weapon of war. Erudite faculty are led by a banner designed as a visual aid for illiterate people in battle. And everyone wears robes originally intended to keep them warm ... 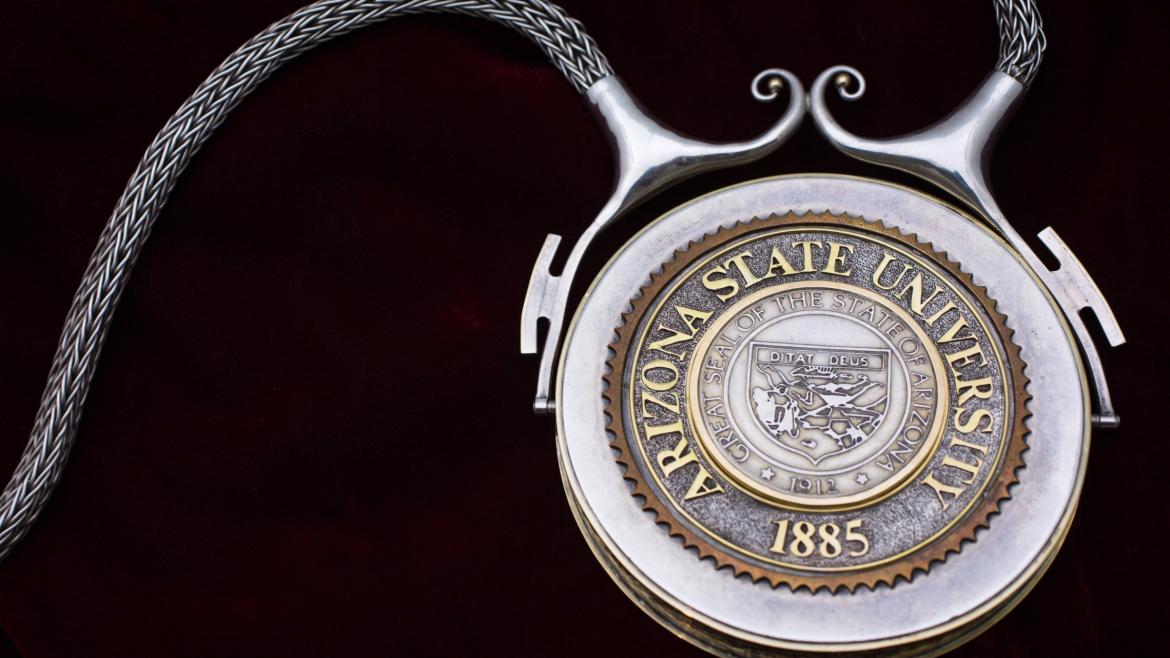 The history behind graduation's gowns, medals and banners.
May 6, 2016

The history and the meaning behind the regalia of ASU's commencement

Arizona State University may be ranked No. 1 in the nation for innovation, but when it comes to graduation, it goes medieval.

Consider this: The leaders of an institution of knowledge march in behind someone carrying a fearsome weapon of war. Erudite faculty are led by a banner designed as a visual aid for illiterate people in battle. And everyone wears robes originally intended to keep them warm in chilly buildings in a damp climate.

“In this very modern ceremony, we have these ancient traditions,” said Melissa Werner, director of university ceremonies and protocol officer. “A lot of the iconography has to do with the Middle Ages period. ... As the person who puts on commencement, it’s important I know that history.”

Werner is in effect the keeper of ASU’s crown jewels. “I don’t have a tower,” she said. “I have a closet on the third floor.”

As students and loved ones sit in the audience at the May 9 commencement ceremonies wondering what the panoply signifies, here’s a quick guide.

The President’s Chain of Office

This — seen at the top of this story — is the huge medallion university President Michael Crow wears that looks a bit like something worn by Flavor Flav in 1985. It’s a silver rope woven from strands of hand-turned links, holding a medallion 6 inches in diameter that reverses to reveal the ASU seal in gold on one side and silver and turquoise circles on the other. (Below you will find a photo of the back of it, which is rarely seen.) 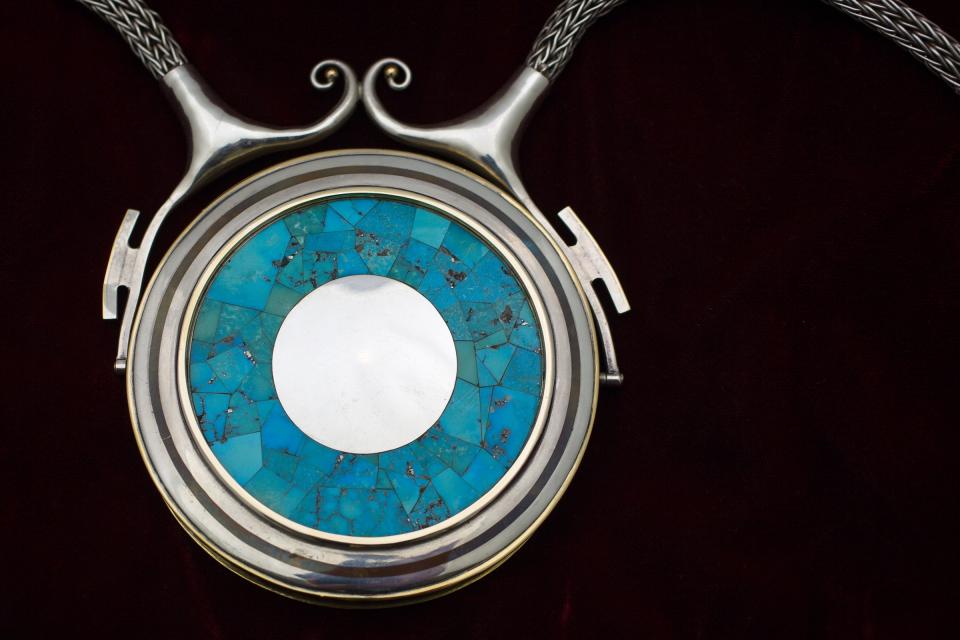 “We don’t pull it out unless it’s a formal event,” Werner said. The chain of office, like the ceremonial mace (more on that in a bit), is only used at ceremonies in which faculty members are in full academic regalia, such as the Inauguration of the ASU President, University Commencement, Faculty Assemblies, Regent's Professor Induction Ceremonies and Convocation.

Both the chain and mace were created to celebrate ASU’s centennial in 1985. Professor of art David Pimentel hand-crafted them with “austere elegance and traditional Southwestern motifs.”  Not every university has a chain or mace, according to Werner. “It’s too bad, because they are special pieces,” she said.

Fun fact: The medallion isn’t as heavy as it looks.

A mace was used in medieval times to crush heads into raspberry jam. (The movie “Braveheart” has vivid depictions of maces being used in action.)

“It’s literally a weapon of war,” Werner said. “Ours is very pretty. ... It represents the authority of the institution.” 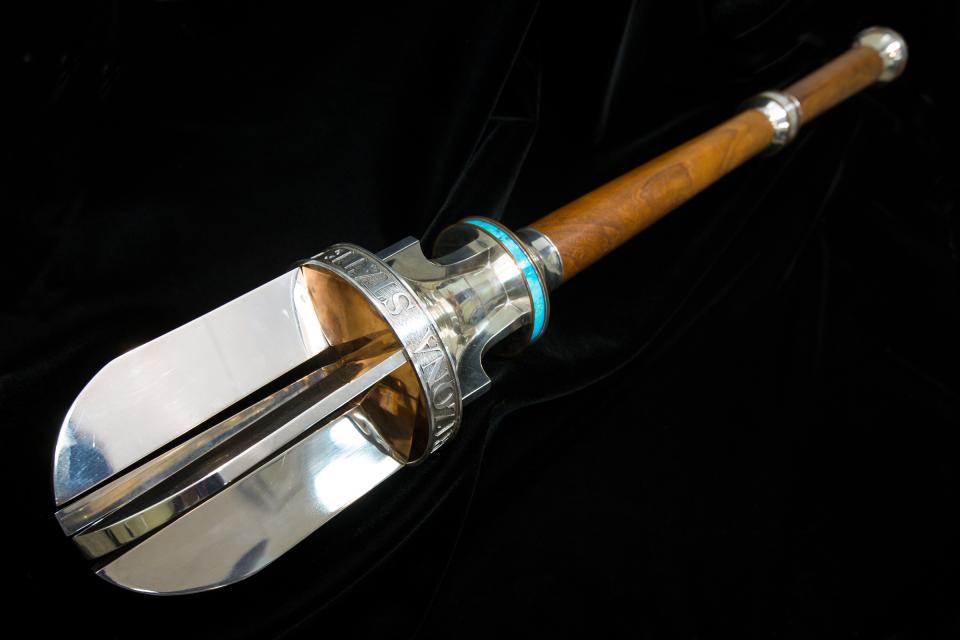 ASU’s Ceremonial Mace is made from Arizona materials. It’s one solid piece of mesquite, approximately 3.5 feet long, weighing 8 pounds. The head has four sterling silver blades and is banded with copper, Morenci turquoise, and a silver ring on which the words “Arizona State University” are embossed. The turquoise inlay was cut and polished by Navajo jeweler Richard Charlie of Mesa. The ASU seal is embossed in silver on the heel of the mace.

When Werner first got her job, she went to retrieve the mace from the library. It was wrapped in bubble wrap in a lamp box. Now it’s kept in a custom-made velvet bag in a case in a locked cabinet in a locked closet.

It’s carried in formal university ceremonies by a grand marshal. When the mace is “placed” (set down), the academic ceremony can begin. In United Kingdom House of Commons sessions, their ceremonial mace is carried in and placed on or under a table. Without the mace placed, the house is not legally convened and members cannot debate.

The earliest ceremonial maces were carried by sergeants at arms around the time of Richard I. Given that that was the late 12th century, when maces were still being used to bash in skulls, the maces were likely more than ceremonial. About the beginning of the 15th century, they evolved to a purely ceremonial instrument used by academicians in rituals. The oldest known ceremonial mace is from St. Andrew University in Scotland, used in 1438.

Fun fact: The mace also isn’t as heavy as it looks, although Werner tells grand marshals they can cradle it instead of carrying it upright if it gets to be too much.

Gonfalons are heraldic banners. The faculty march in behind their gonfalon, which is different for each college. “This is the visual representation of the college,” Werner said. 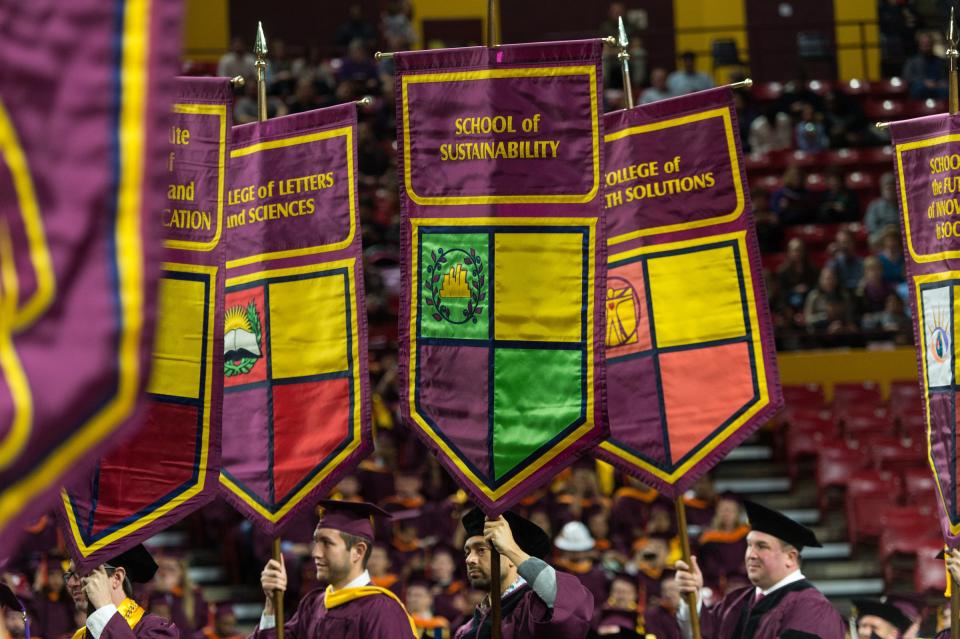 Gonfalons were used to mark positions on battlefields for troops, none of whom could read. “It really is the identifier for that city-state,” Werner said. “They were used in war.”

One would expect the robes and colors to be as ancient as everything else and originate in places like Perugia and Heidelberg. Shockingly, it’s all mostly American and not very old at all.

Academic dress in Europe has always been all over the place, varying from country to country and institution to institution.

We can thank Gardner Cotrell Leonard, from Albany, New York, for setting it all straight. He designed the gowns for his class at Williams College in 1887. He was fascinated with the subject and wrote a paper on the subject. (It should also be mentioned his family conveniently owned an academic regalia company.)

After the publication of his paper in 1893, Leonard was invited to work with an intercollegiate commission made up of representatives of leading institutions to establish a system of academic apparel. The commission met at Columbia University in 1895 and adopted a code of academic dress, which besides regulating the cut, style and materials of the gowns, prescribed the colors representing the different fields of learning.

For instance, purple is for law and jurisprudence, gold is for psychology and copper represents economics. 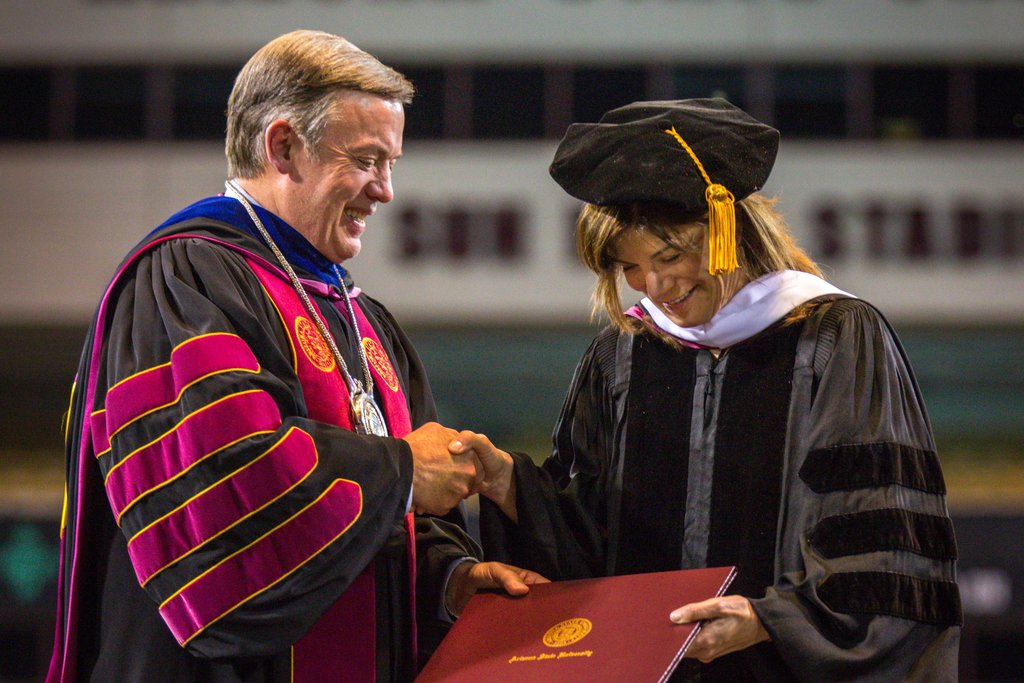 “At ASU it’s challenging because we are so cross-disciplinary,” Werner said. Changing the colors is not an option. With 400 majors at the university, “we try to fit them.”

“We look for the broadest area in assigning colors,” she said. For instance, all engineering hoods are orange, even if the wearer has a degree in bioengineering.

Sustainability is still up in the air. Kelly green represents medicine, so that was taken.

“We ended up with what’s called scarab green,” Werner said. “I felt we had an obligation as the first school of sustainability in the country to be thoughtful.”

Werner doesn’t know what colors other sustainability schools are choosing for their hoods. ASU’s choice has been submitted to the American Council on Education, the governing body for such things, but it hasn’t been reviewed. The academic costume code hasn’t been reviewed in decades, according to Werner.

Stripes on the robe sleeves are a simple code. Undergrads get one stripe, grad students get two, doctors get three, and the university president gets four.

Originally the tassel was used to repair tears in robes. Turning the tassel is a ritual within the tradition of commencement. When students can’t remember what side of the mortarboard it sits on, Werner tells them, “Left as you leave.” 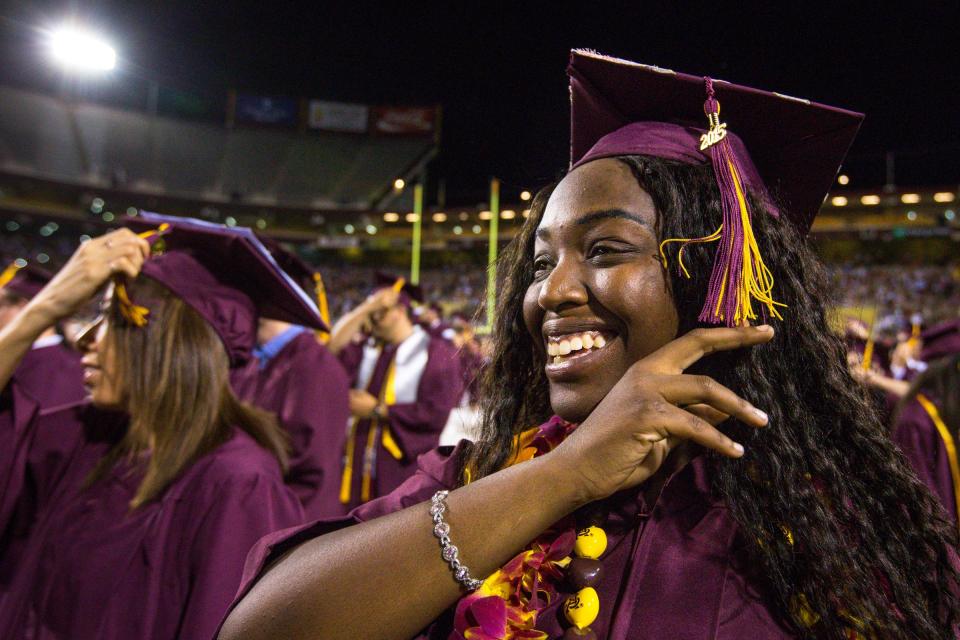 It’s a ritual resurrected at ASU eight or nine years ago. What’s it mean? “You officially had your degree conferred,” said Werner, co-founder of the North American Association of Commencement Officers.

“Commencement is a huge deal,” she said. “It’s as big as a wedding or the birth of a child. It’s a huge milestone. ... It needs to be an experience they’ll remember that ties them to the institution. ... I want them to be excited. This is their party.”

Undergraduate Commencement: 7:30 p.m. Monday, May 9, at Chase Field in Phoenix.

More details, such as times and locations for individual convocations; ticket information; details about photos, video and flowers; and a list of prohibited items for Chase Field: graduation.asu.edu/ceremonies/latest.

Profiles of some outstanding graduates: bit.ly/1QRQNR6.