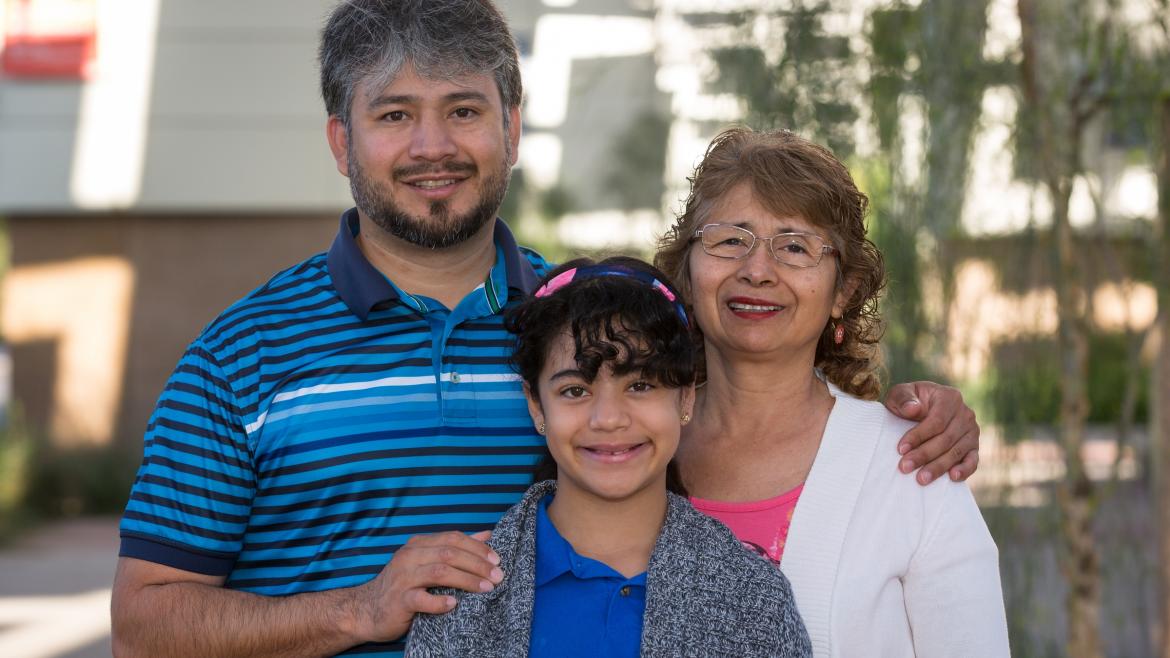 For the love of family

With his daughter as inspiration and his mother's support, Yuri Lechuga-Robles turns his life around, discovers love of landscape architecture

Yuri Lechuga-Robles rebuilt his life the minute his daughter was born. In those first moments she came into the world, he knew it was time to lay the groundwork for a new future.

Born in Cuernavaca, Mexico, Lechuga-Robles moved around quite a bit in his youth. He spent part of his childhood in El Paso; then, when his mother remarried, his family settled down in Mesa when he was around 11. Lechuga-Robles found his passion in a high-school drafting class, eventually attending High Tech Institute. Despite landing a job with a firm and living what he thought was his dream, he lost his way, struggling with drugs and alcohol.

Then he had his daughter, AnnaMariah Robles-Lantigua (pictured above with Lechuga-Robles and his mom, Maria Budzinski), and pruned away all the negative forces from his life. He said that after her birth, he took the first steps to “get back to the values that were taught to me.”

Charging forward with a renewed outlook, and a mission to “finish something,” Lechuga-Robles got busy and plugged in.

He went back to school at Mesa Community College (MCC), where he first learned about landscape architecture, before transferring to ASU. He joined the Student Chapter of the American Society of Landscape Architects and the Phi Theta Kappa honors society as a dedicated member of both groups. This found Lechuga-Robles organizing a book fundraiser for the Boys & Girls Club to reestablish the club library lost in a fire many years ago.

Eventually his dedication to the community was recognized by the Arizona Department of Transportation, and he was awarded the John McGee Intern Scholarship — the first landscape architecture student to receive this award.

Days away from being handed a bachelor’s of landscape architecture through the Design School in the Herberger Institute for Design and the Arts, Lechuga-Robles — who will be 10 years sober in December — is reflective about the past and looking forward to a bright future.

Answer: At MCC and talking with LeRoy Brady (the landscape architect of the rose garden at MCC) and one of my other professors — through one of the assignments we had in one of those classes was to design a new building for architecture if MCC acquired new land. That’s where I saw I was really interested in outside spaces. … When I came to ASU I still had my mind kind of set on architecture. Then I learned about the 3+ program and I thought, “Why would I want to go six years to get one license when I could go seven and get two licenses: architecture AND landscape architecture?” When it came time to decide which way I wanted to go, I just went that way. And now I don’t want to do the other. There’s enough in landscape architecture for me.

One of the most significant projects I worked on at ASU was the 30-year with Kristian Kelley (LDE 362/590: Landscape Architecture II). We had to look at a space in downtown Phoenix kind of in the south central area. It deals a lot with the culture, a lot of low-income residences. And just on the other side of the tracks there’s these office buildings and the ballpark. It’s a big contrast, and I really enjoyed connecting the two and still keeping the character of the neighborhood and bringing in some of their cultural values and things that they’re proud of.

That was my favorite project. It gave me a sense of focus and direction for what I wanted to do with landscape architecture, because there’s so many avenues you can go on with that degree. I’m interested in urban infill and urban design, projects that deal with social justice, thinking about current issues. I see people flying off the handle, and it seems to me they don’t have a way to connect with other people, a way to release. I draw from my experience dealing with drugs and alcohol. I see maybe there’s something lacking there. It seems to me like there might be a way to address that through landscape architecture.

A: My internship (with ADOT), being part of the meetings with the different communities. They involved me in some of the pre-design stuff, going to meetings with different communities the projects run through. One thing they do is try to collaborate with the different communities to take into consideration their goals, doing community workshops and those kinds of things. …. You have to take other people’s culture into consideration, not just do it because that’s how you think it should be. The back and forth that goes on surprised me; it’s always a challenge. You have a meeting and then you go and design something and you send it back and there’s some other thing that wasn’t thought of before and then you have to meet again. It’s not simple.

A: I wanted to stay close to my family, my sister and my daughter, AnnaMariah, who’s 10.

A: Just to look to surround yourself with people who will support your ideas and can also be critical but not put you down.

A: I didn’t do a lot of hanging out on campus. There are several courtyards around campus that I’ve seen and really enjoy a lot (Mary Lou Fulton). The one on the south side of the MU, with the fountain, I like that.

A: I want to take my daughter to Mexico. She hasn’t met my family down there. I’m planning to go there for 10 days. My daughter really likes the beach, so the plan is to hang out with my family for five days and then go to different beaches for five days. Besides the fun, I need to be working. I hope to be working. I’m applying for jobs once I’m done graduating. I can work at ADOT for six months after I graduate so I have a bit of a cushion. I will be sending my resume out right after graduation.

A: I just started learning about this thing called microaggression so maybe that. It’s just a stigma that people put on different groups of people that is negative.

Q: Anything you want to add?

A: My mom: I want to find a way to thank her. I see the love of God in her, I think that she’s never given up on me.

When I needed her she was there, and when I thought I didn’t need her, she was still there. Moms are special. Especially now — when I came to ASU I knew what was going to happen, that things were going to get difficult and I was going to need help with my daughter. I talked with my stepdad and my mom and told them I might need help. After the second year, she moved down here to help me out, and they got a second home. She’s been very supportive. I probably wouldn’t have been able to finish without her.

Q: What’s the most important lesson your mom taught you?

A: [He thinks for a long moment.] Love. Just love.

This is National Children’s Mental Health Awareness Week, and Marjorie L. Baldwin, a health economist at the W. P. Carey School of Business at Arizona State University and director of the Public Health Program in the College of Health Solutions, offered insights from her book, "Beyond Schizophrenia: Living and Working with a Serious Mental Illness," about raising her son, who was diagnosed with ...

This is National Children’s Mental Health Awareness Week, and Marjorie L. Baldwin, a health economist at the W. P. Carey School of Business at Arizona State University and director of the Public Health Program in the College of Health Solutions, offered insights from her book, "Beyond Schizophrenia: Living and Working with a Serious Mental Illness," about raising her son, who was diagnosed with schizophrenia in 1999. She provides tips for early diagnosis and better treatment outcomes.

Question: How can parents recognize early symptoms of schizophrenia in their children? 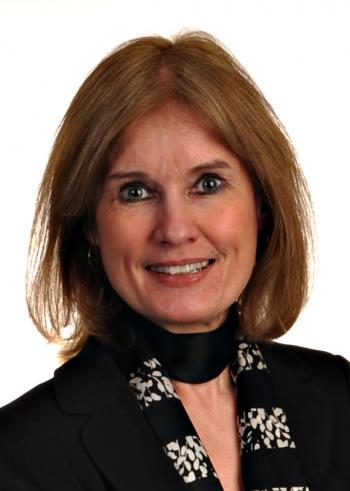 Marjorie L. Baldwin, a health economist at the W. P. Carey School of Business and director of the Public Health Program in the College of Health Solutions at Arizona State University. Download Full Image

Answer: The early symptoms are easy to miss, because they are similar to the behavior patterns we have come to associate with drug abuse or other mental illnesses. In my son, I observed changes in conduct that included unexpected outbursts of anger, excessive energy and risk-taking, odd and sometimes embarrassing behavior. Perhaps the most telling sign was disorganized, disconnected speech that made no logical sense.

Q: How can it best be diagnosed, and what should the first steps be upon diagnosis?

A: Schizophrenia is best diagnosed by a psychiatrist who has training and experience dealing with serious mental illness. Often this occurs, as it did for me, in a hospital emergency room where the patient has arrived because his or her behavior has become so bizarre. First steps: Get your child into treatment — the sooner treatment begins, the better the chances for recovery. Educate yourself about the illness — it is important to know the facts to counter the stereotypes. Get support for yourself — the National Alliance for Mental Illness is an excellent resource.

Q: What prompted you to write a book about schizophrenia? Can you summarize the core focus of the book?

A: I was in the unique position of being a health economist whose research focuses on discrimination against workers with disabilities, and the parent of a son who had schizophrenia — one of the most stigmatized of all health conditions. The book combines my personal story with state-of-the-art research on the factors that contribute to recovery from a serious mental illness, including: the mental-health system, the family, and the opportunity for meaningful and rewarding employment.

Q: What has been the biggest challenge parenting your son, and what hope can you offer parents who may have a child who has been diagnosed with schizophrenia?

A: The biggest challenge has been to just keep going, to help my son put his life back together after the initial diagnosis, and again after each relapse into acute symptoms of psychosis. The book is meant to be a source of hope for patients and their families that they will be able to move beyond schizophrenia, and get on with their lives. The book is also meant as a challenge to our dysfunctional mental-health system — which has failed to provide appropriate care for people with serious mental illness, or adequate support for the families who care for them.