Year in Review: ASU ranks in the top 100 most prestigious universities worldwide

Arizona State University has been recognized as one of the top 100 most prestigious universities in the world by Times Higher Education, the world’s largest invitation-only academic opinion survey. 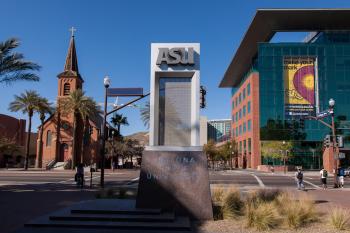 Universities ranked between 51 and 100 are placed in groups of ten. These survey results are among several elements that will contribute to an overall ranking released later this year.

ASU was one of 43 U.S. universities to make the list, and the only university from Arizona. Each academic surveyed named up to 15 universities that they believe are the best for research and teaching in their respective disciplines.

Though the rankings are based entirely on opinions of highly-regarded academics, THE says those opinions are rooted in unique insight that those researchers are well suited to provide. Respondents provided about 400,000 individual data points on how universities around the world are perceived by their peers in each discipline.

Times Higher Education emphasized that a strong reputation is key to attracting funding, business investment and partnerships, and “perhaps most importantly of all, it is essential for drawing in top global talent – staff and students alike.”

Top journalism students from 18 universities will lead an investigation into voting rights as part of the 2016 Carnegie-Knight News21 national multimedia investigative reporting initiative.Headquartered at Arizona State University’s Walter Cronkite School of Journalism and Mass Communication, News21 was established by the Carnegie Corporation of New York and the John S. and James L. Knight Found...

Top journalism students from 18 universities will lead an investigation into voting rights as part of the 2016 Carnegie-Knight News21 national multimedia investigative reporting initiative.

Headquartered at Arizona State University’s Walter Cronkite School of Journalism and Mass Communication, News21 was established by the Carnegie Corporation of New York and the John S. and James L. Knight Foundation to demonstrate that college journalism students, under the direction of top journalism professionals, can produce innovative and deeply reported multimedia projects for a national audience. 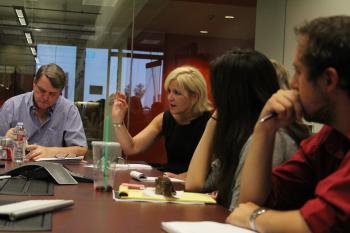 Thirty-one students are part of this year’s project, which focuses on the political divide between citizens with significant voting power and those without, particularly in disadvantaged communities. The students participated in a spring seminar taught in person and via video conference by Leonard Downie Jr., former executive editor of The Washington Post and Cronkite’s Weil Family Professor of Journalism. This summer, they will work out of a state-of-the-art newsroom at the Cronkite School in downtown Phoenix and travel the country to report and produce their stories.

“We chose voter access and participation for this year’s News21 project in a national election year to investigate why groups of citizens, including Latinos, African-Americans and millennials, are still under-represented among U. S. voters,” Downie said.

Previous national News21 projects have dealt with topics ranging from food safety to gun rights and regulations and the challenges facing veterans returning home from wars in Iraq and Afghanistan. Last year’s project, which examined the trend toward legalization of marijuana in the U.S., was published by major media partners, including The Washington Post, USA Today, nbcnews.com, the Center for Public Integrity and the E.W. Scripps Co., plus a number of nonprofit online news sites affiliated with the Institute for Non-Profit News.

This year, News21 is returning to a topic students first tackled in 2012 when they conducted the most exhaustive study ever of American election fraud.

“With each project, we look for new ways to push News21 to the forefront with an original presentation that provides both an investigative and an immersive experience,” said News21 executive editor Jacquee Petchel, a Pulitzer Prize-winning journalist who headed investigations at the Houston Chronicle before coming to the Cronkite School. “So this year, innovative storytelling will be paramount as we explore untapped data, VR/360 visuals and the latest in digital tools and graphics.”

News21 projects have won numerous awards, including four EPPY Awards from Editor & Publisher magazine, the first Student Edward R. Murrow Award for video excellence and a host of honors by the Society of Professional Journalists and the Hearst Awards Program, considered the Pulitzer Prizes of collegiate journalism.

Fellows are selected for the highly competitive, paid summer fellowships based on nominations submitted by journalism deans and directors from across the country as well as how they perform in the spring seminar, during which they prepare by deeply immersing themselves in the topic.

This year’s fellows are:

News21 fellows are supported by their universities as well as a variety of foundations and philanthropists. The Ethics and Excellence in Journalism Foundation supports the three University of Oklahoma fellows as well as three fellows — Altavena, Armstrong and Holstege — from ASU.

The Donald W. Reynolds Foundation supports Columbus, Hauglie and Peifer of ASU, and the Hearst Foundations supports the fellowships of Davis and Fox, both from ASU. Louis A. “Chip” Weil provided the support for ASU’s Mahoney.

The Carnegie Corporation of New York: The Carnegie Corporation of New York, which was established by Andrew Carnegie in 1911 "to promote the advancement and diffusion of knowledge and understanding," is one of the oldest, largest and most influential American grant-making foundations. The foundation makes grants to promote international peace and to advance education and knowledge

Hearst Foundations: The Hearst Foundations are national philanthropic resources for organizations and institutions working in the fields of education, health, culture and social service. Their goal is to ensure that people of all backgrounds have the opportunity to build healthy, productive and inspiring lives. The charitable goals of the Foundations reflect the philanthropic interests of William Randolph Hearst.