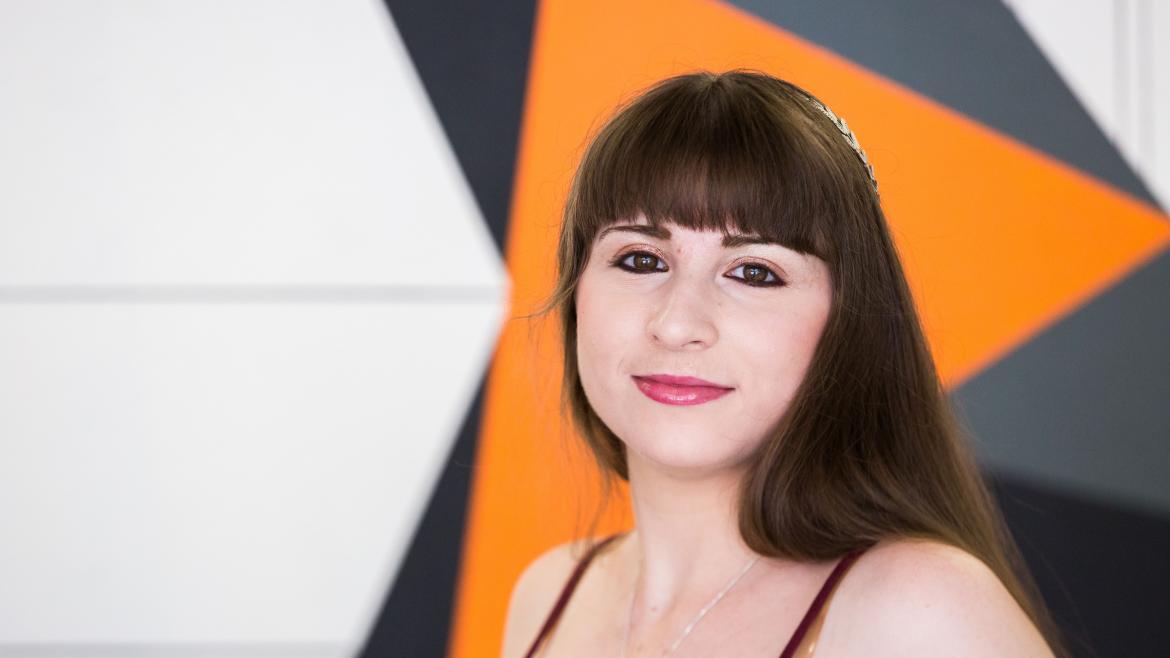 Editor's note: Marieke Davis will talk about her graphic novel Ember Black at a Phoenix Comicon 2017 panel from noon to 1 p.m. Friday, May 26.

Herberger student Marieke Davis doesn’t wear a cape or possess any special powers, but to visually impaired fans of the comic book genre, she could be their next superhero.

Davis, who calls herself a “visually impaired visual artist,” was recently crowned the Audience Choice Award winner at the IDEA ShowcaseMFA student Ashley Laverty won the Judge’s Prize and was awarded $500 to continue her work on Kerfuffle, a theater company for children age 5 and younger. — an event that rewards student innovation in design and the arts hosted by the Herberger Institutue Office of Enterprise and Entrepreneurship. Davis will use the $250 prize money to advance an arts venture she has been working on for the past two years, a graphic series titled “Ember Black.”

The BFA drawing major in the School of ArtThe School of Art is part of the Herberger Institute for Design and the Arts. BFA stands for Bachelor of Fine Arts. , who was diagnosed with hemianopsiaHemianopsia, or hemianopia, is decreased vision or blindness in one half of the vision field, often caused by stroke, traumatic brain injury or brain tumor. as a child, is drawing on her life experiences to create a comic for the non-traditional reader.

What makes Davis’ endeavor particularly impressive is that she is visually impaired in both eyes, stemming from three brain surgeries since age 10.

“Growing up I tried accommodate my impairment in different ways,” Davis said. “Art, drawing and writing have always been my therapy.”

The series is based on Emily Black, a bright but cynical 22-year-old college senior who is extremely protective of her naïve 17-year-old sister, Amy. When Amy is kidnapped by a cult-like group, Emily is left for dead until she becomes possessed by Ember, a cannibal spirit known in Algonquin lore as a Wendigo. Together, Emily and Ember must learn to co-exist and cooperate in order to find Amy before it’s too late.

“This experience has taught me a lot. Mostly that art should be inclusive, not exclusive.”
— Marieke Davis, Herberger Institute drawing major who is creating both visual and audio versions of a comic book

Davis, who has a minor in English literature and will earn a gender studies certificate in creative writing, said her intended audience is young women and men ages 15 to 30.

She said feminists will embrace Emily, too.

“I’ve noticed that a lot of comic books are written by men, and you see them draw women who are buxom with these ridiculously slender waists,” Davis said. “Emily is pretty but not ridiculously gorgeous. She’s a bit of a tomboy, rides a motorcycle, wears a leather jacket, neck tee and jeans. She’s sarcastic and suspicious and will explore feminist issues.”

That’s the beauty of “Emily Black,” said Jessica Fishell, a development officer with the ASU Foundation for a New American University and the co-owner of Critical Threat, a comic book store in Tempe. Fishell was also at the IDEA Showcase and was “thrilled” when she heard Davis’ two-minute pitch.

“Marieke’s art is impressive and definitely a lot more emotional than a lot of the stuff being published today,” Fishell said. “That’s a trend I’m starting to see in more of in comic books. There’s a growing space for artists to create characters that are more meaningful and less mainstream.”

Davis is also creating an audio component of the book for the visually impaired, and recently completed recording the first installment with a group of eight ASU students Emily Adams, Kayla Towbridge, Analise Rosario, Jerry Hoover, Angel Lopez, Sedona Ramonett, AJ Maniglia and Karen Davis. and ASU sound engineer Derek Stevenson. They recently completed recording the prologue and the first chapter, which totals about 45 minutes, in the audio lab of ASU’s School of Arts, Media and EngineeringThe school is a collaborative initiative between the Herberger Institute for Design and the Arts and the Ira A. Fulton Schools of Engineering. .

“I rely on speech-to-text programs. Without audio support, I wouldn’t have attended college, and I’d have missed so much,” Davis said. “When my liaison at the Disability Resource Center told me that her daughter is a visual artist, yet since she’s blind, she’s never seen her daughter’s work — that’s when I decided to create an audio version.”

Davis said drawing the comic book was nowhere near as tough as auditioning, selecting and directing the cast, which started in February and ended this month.

“It took a little longer than expected because I felt like I had no idea what I was doing. For a while I was very stressed out and thought there was no way I could get this done,” Davis said. “After the cast was assembled, everything fell into place. It turned out that since this was for audio, I didn’t have to worry about if the cast looked the part or how good their gestures were. It’s mostly inflection.

“Any good artist or writer will be able to envision their characters and know how they speak.”

Theater major Emily Adams, who played the speaking role of Emily and Ember Black, said Davis was a strong director and thought she did a commendable job.

“Even though Marieke had no experience directing, she had a very clear idea of what she wanted and guided us in a way that vocally brought the characters to life,” Adams said. “It was also exciting doing voice-over work and getting paid for it.”

Adams said she is pleased that the audio recording will reach a new audience.

“We are creating a new awareness about communication and showing that the arts are not just for the rich but for everyone,” Adams said. “I’m starting to see this in all facets of performance art, and it’s about time.”

With the audio portion in the can, Davis will spend the summer focusing on finishing the 160-odd storyboards to assemble for the print version of “Ember Black.” She will present both the print and audio version at the School of Art BFA Exhibition in fall 2016. Davis believes the audio could be released as a CD or possibly posted on an “Ember Black” website in the future.

“This experience has taught me a lot,” Davis said. “Mostly that art should be inclusive, not exclusive.”

The joke's on him

Editor's note: This is part of a series of profiles for spring 2016 commencement. See the rest here.If the Marx brothers were alive today — and if they met Arizona State University’s Michael Longfellow — they might consider adding another “brother” to the act.Longfellow, who is graduating this spring with a bachelor of arts in English literature, is banking on a career in stand-up come...

The joke's on him

If the Marx brothers were alive today — and if they met Arizona State University’s Michael Longfellow — they might consider adding another “brother” to the act. 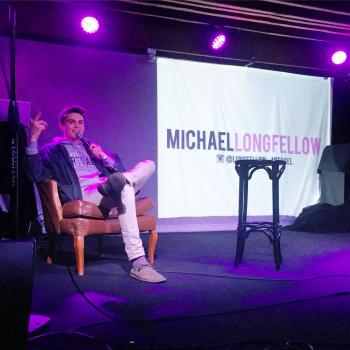 Longfellow, who is graduating this spring with a bachelor of arts in English literature, is banking on a career in stand-up comedy. The Scottsdale native trades in the vaudevillian quip, much like Chico, Harpo, Groucho, Gummo and Zeppo, but with a Millennial twist.

It’s not just a coincidence that Longfellow shares his surname with a famous American poet — according to his grandmother they are related — and it’s clear that this Longfellow’s passions lie in perfecting the use of language too. Post-graduation he’ll head to the Mecca of modern comedy, New York City, to practice and hone his craft.

He says he was once on Fox’s "Laughs" television show, which promotes young, upcoming comedians, “for 48 seconds.” Locally, he can be found, “at the Tempe Improv opening for the guy who’s opening for your favorite comedian.”

Yes, Longfellow tosses out witty, often self-deprecating responses to questions. In the course of this interview he dealt his deadpan answers like poker cards — quickly and well-aimed.

Answer: I did comedy for the first time as a freshman and immediately realized it was the only thing I really wanted to do. I knew if I was going to have to go to college, a degree that dealt with words and language would best suit my interests. Also, math was difficult, and when science became more than baking soda volcanoes or putting small things in water to watch them get bigger, I really had nowhere else to turn.

A. Inside the classroom I learned American Sign Language, but I forgot it. Outside of the classroom, and specifically outside of the MU, I learned, weekly, that I was going to hell; I’m just happy a crazy man was nice enough to let me know. Aspiring comic Michael Longfellow says, "I did comedy for the first time as a freshman and immediately realized it was the only thing I really wanted to do." Longfellow will graduate from ASU with a degree in English literature in May and then plans to head to New York City.

A: I’d like to think ASU chose me, because nowhere else did.

• “These will be the best years of your life” is a weird thing that weird old people say that should totally be ignored. You have 50 years left after these four, and if you’re looking forward to them it’s much easier to convince yourself to rage a little less and work a little harder at making them something worthwhile.

• A lot of people aren’t going to like everything about you, but some people are! Just find those people and stick with them.

• Ride a bike, not a longboard.

• Ride a longboard, not a penny board.

• The “liquor before beer” trick doesn’t work if you just drink too much.

• A nap in the Secret Garden is the quickest way to bug bites.

• Find your on-campus bathroom and never betray it.

• No one cares what they look like from the hours of 6 a.m.-noon so don’t worry about getting up early enough for a shower.

A: The hot dog place right next to the Secret Garden is great for all three of these. It has nice hot dogs and a colorful bike rack to look at.

A: I’m busting a Kimmy Schmidt and moving to New York City to be a big-time New York City comedian. Comedy shows are primarily at night, so hopefully I can fill my days up with a writing position somewhere nice. If that doesn’t work, you can catch me serving McMuffins at your local Brooklyn McDonald’s.

A: The lack of $40 million in my bank account is a huge problem I would definitely solve, but maybe I would also buy out Nick at Nite and bring "Fresh Prince" and "Family Matters" back to their respective time slots, which is whenever I’m going to bed.

The Department of English is an academic unit of ASU's College of Liberal Arts and Sciences.