Pritika Shahani isn’t even in med school yet and she already has four years of cancer-drug research under her belt. Sophisticated concepts and formidable verbiage spilled out of her like water off a duck’s back at ASU West’s Undergraduate Research and Creative Project Symposium, where the New College biology senior is joined by dozens of other similarly driven, inquisitive scholars.

The April 28 event brought together undergraduate students from ASU’s West and Tempe campuses, as well as local community colleges, to present research projects on topics ranging from the importance of vitamin D’s effect on psychological behavior, to the alarming prevalence of black widows in urban environments, to how algae could be the next-generation fuel.

Todd SandrinIn addition to his position as director of New College’s undergraduate research program, Sandrin serves as associate dean for the college and as an associate professor in its School of Mathematical and Natural Sciences., director of undergraduate research at ASU's West campus, called the symposium “a chance for students to take what they’ve done and show off to a broad audience” that includes their peers, faculty, staff and even CEOs.

“These undergrads are doing some state-of-the-art research, and this gives them the opportunity to communicate the value of it,” Sandrin added. “It’s about truly supercharging their undergraduate experience and exposing them to the job market even before graduation.”

In past years students have been offered internships and even jobs based on their presentations.

The inclusion of projects by students from local community colleges is an important factor at the symposium.

“Community colleges are a pipeline to ASU for many students,” said Sandrin. “In many places, including New College, up to 70 percent of the graduating classes are students that came to ASU from community colleges.” 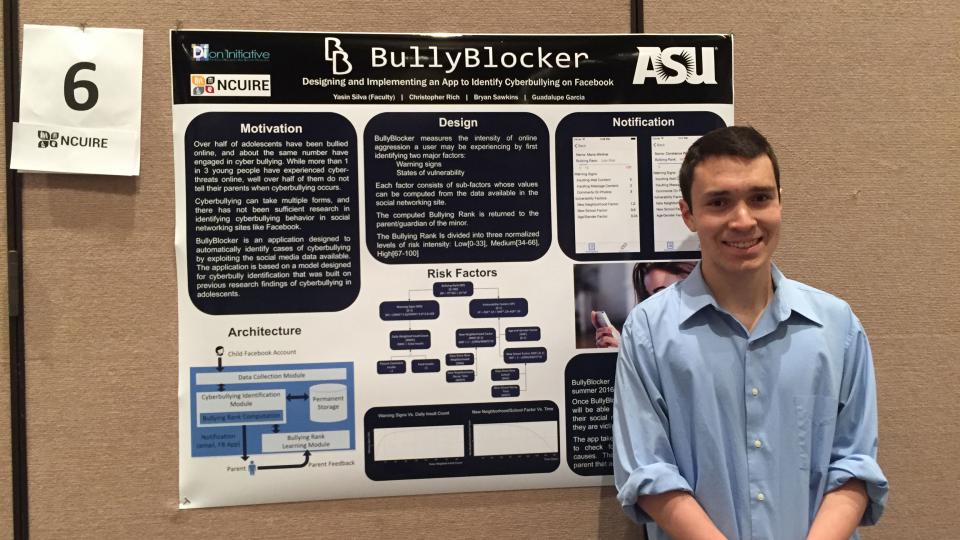 Many, though certainly not all, of the students participating in the symposium are presenting on projects they worked on with faculty mentors as part of the New College Undergraduate Inquiry & Research Experiences (NCUIRE) Program.

Students can apply for awards through NCUIRE that provide funding and faculty guidance for their research. The kind of experience they gain through the program is invaluable, said Sandrin.

“They’re applying what they’ve learned in the classroom to real-world problems outside the classroom, and at the same time mixing with faculty members who are at the defining frontiers of knowledge,” he said.

Thursday’s symposium also included a keynote address from assistant professor Tess NealTess Neal is an assistant professor in New College’s Social and Behavioral Sciences division., who recently joined New College and served as a mentor to one of the student teams presenting this year. Neal’s address detailed their research into forensic-expert biases.

The day’s events concluded with an award ceremony, the winners of which are as follows:

2nd place – “An Investigation into the Disruption of Bacterial Quorum Sensing,” by Anthony Gutierrez, Chad Albert and James Tuohy

3rd place – “Is There Poison in the Plastic? Measuring the Absorption of Organic Contaminants to Common Household Plastics,” by Todd Allen, Savannah Farley, Cassandra Clement, Veronique Back, Robert Carpenter and Beth Polidoro

3rd place – “Scaling of force production in the jaws of the dusky smooth hound shark,” by Tessa Lehan, Ana (Bea) Roman and Lara A. Ferry

Honorable Mention – “The Activity of Deinococcus Radiodurans Catalase as a Function of Salt Exposure,” by Robert Mann and James Tuohy

“An Investigation into the Disruption of Bacterial Quorum Sensing,” by Anthony Gutierrez, Chad Albert and James Tuohy

“The Activity of Deinococcus Radiodurans Catalase as a Function of Salt Exposure,” by Robert Mann and James Tuohy

All over the industrialized world, university education is undergoing long-anticipated change. Universities, in Europe and especially North America, are emphasizing more learning through real-world experience, interdisciplinary studies, integrated teaching and research, social media, and online courses. For policymakers in developing countries, university-level education remains a lower priority, but emerging trends suggest wider participation by the children of middle classes and reduced reliance on top-down models of learning. Increasingly, the best and brightest of developing countries view university degrees as the new normal, and star students seek to balance mastery of established fields of disciplinary knowledge with an advanced education in interdisciplinarity, creativity, and entrepreneurship. In an unexpected turn, these trends are growing in visibility and significance in sub-Saharan Africa.

Drawing on parallel studies of public and private universities in Uganda and Kenya, Matthew Harsh (Concordia) and Gregg Pascal Zachary (Arizona State) present preliminary findings on innovations in higher education that augur well for workforce development, economic growth, and directing knowledge workers towards the pursuit of unmet societal goals, as well as rewarding individual careers. Harsh and Zachary pay special attention to the emergence of university-based studies in computer science at undergraduate and graduate levels. Dramatic growth in CS graduates in both countries since 2000 reflects demographic trends: widening access to universities for both men and women, as well as a move away from traditional professions and disciplines towards applied and theoretical studies in computing, information technology, and communications. Harsh and Zachary will provide a survey of what’s working and what isn’t in two East African countries where enrollments are growing rapidly and where economies are absorbing talented, well-educated graduates at rates without historical precedent for the region. 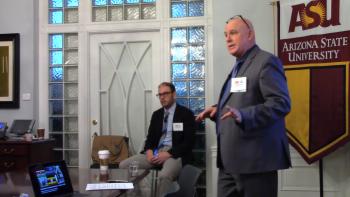