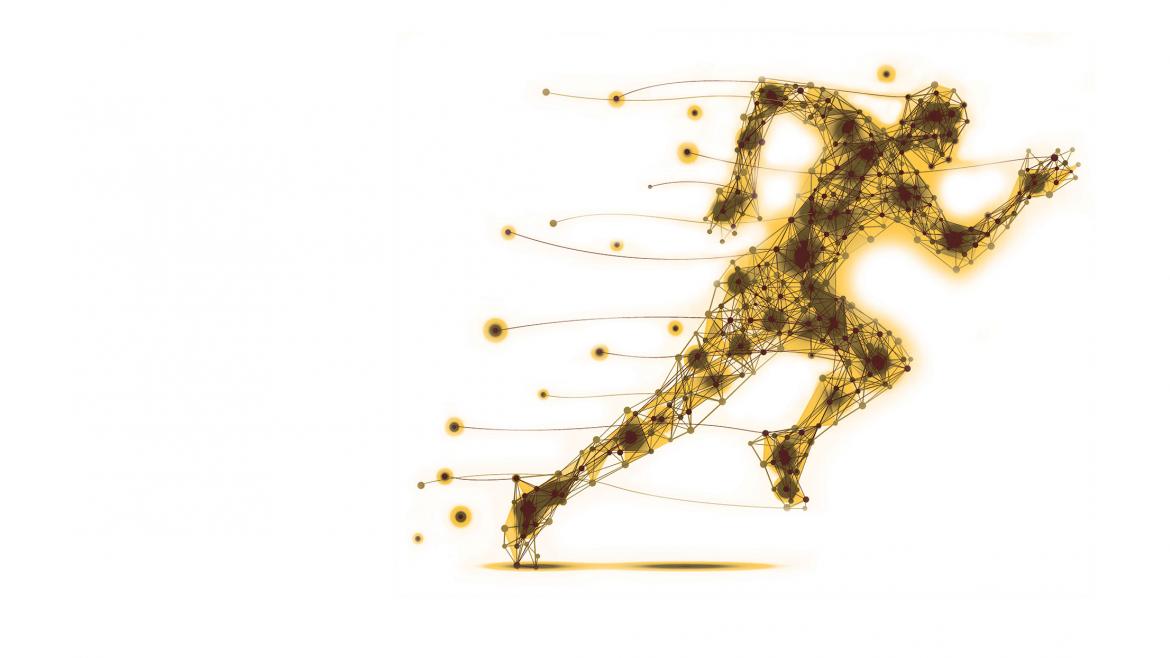 Sprinting into the future

ASU's Emerge festival to explore what sports will look like in 2040, from games to gear to new philosophies that will rule the arena

The chairs of the wheelchair rugby players look like they were buried in a rockslide: nicked, scratched, dented and dinged. The wheels are black and red, scarred and splintered as a Viking shield.

The players are quick. Nick Springer darts in and out of openings, pivoting and reversing in an eye blink. He is a quadruple amputee. He is one of the fastest men on the court.

On the court they slam into each other with impacts that blast the gym. If two of these chairs came together on your ankle at full force, they’d snap it in two. They hit that hard.

They are man melded with machine. They are the future, now. Since double amputee Oscar Pistorius won the fight to compete in the Olympics against people without disabilities, athletes with prosthetics will become more and more common. Future sports won’t be a battle of humans vs. robots, but natural vs. enhanced athletes, researchers say.

The future of human enhancement in sport is part of Emerge 2016: “The Future of Sport 2040,” an event sponsored by Arizona State University to imagine what fitness and competition will look like in the decades to come.

The three most popular sports of the 1920s were baseball, horse racing and boxing. What will be their equivalents in 2040? Quidditch on hoverboards? Smart balls? Low-G sport on Mars? If concussions and other serious injuries are eliminated, will athletes seek out sports with danger, a la the Hunger Games? About 20 features at Emerge will ponder these questions and more — such as how these changes will affect the human experience.

The free family-friendly event will feature a mix of athletic, artistic and scientific explorations, including the rise of eSports (picture a stadium full of people watching players battling in a video game, like an ASU team’s recent win at a national gaming tournament), gadgets and gear that will enhance performance — and that event goers will be able to try out — and interactive sports.

“We’re the biggest, smartest and most interesting festival that brings together artists, scientists, roboticists, athletes, cancer specialists, storytellers, technologists, ethicists and engineers,” said founding co-director Joel GarreauGarreau is the Professor of Law, Culture, and Values in the Sandra Day O’Connor College of Law and an affiliate faculty member in the School for the Future of Innovation in Society. “Imagine we are introducing you to a person from the future.” 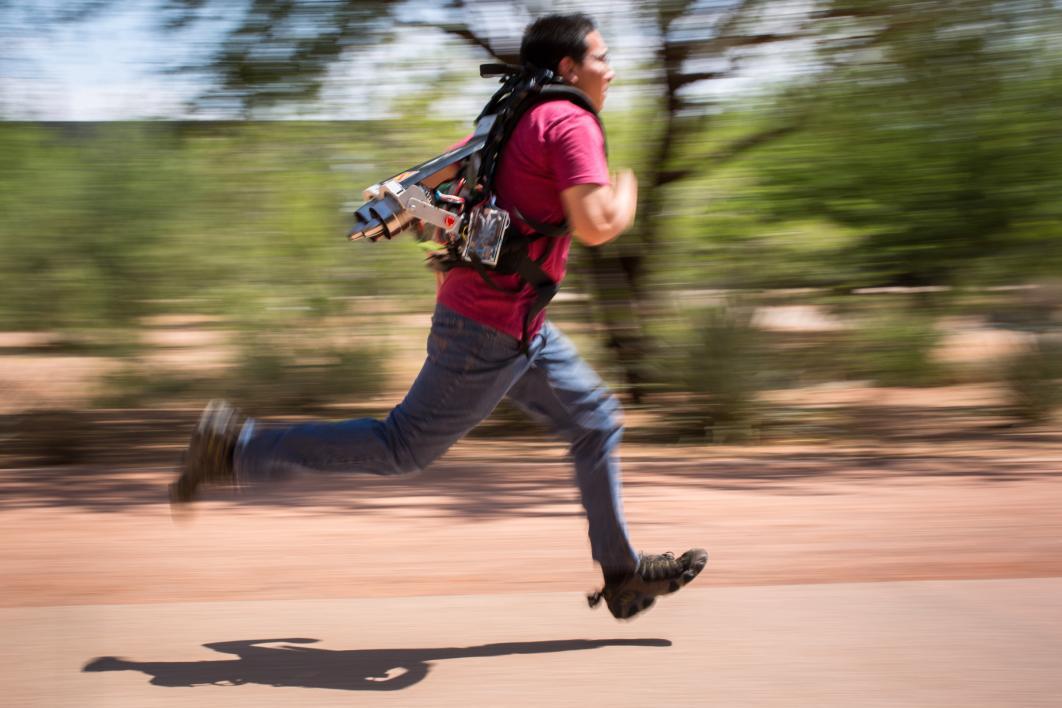 ASU's jet packs won’t make you fly, but instead are designed to allow a person to run faster. And just like ASU mechanical engineering major Eddie Fernandez here — demonstrating his speed outside ASU professor Tom Sugar’s robotics lab on the Polytechnic campus in Mesa — visitors to the April 29 Emerge event in Tempe will be able try the jet pack, plus a range of other cool gadgets. 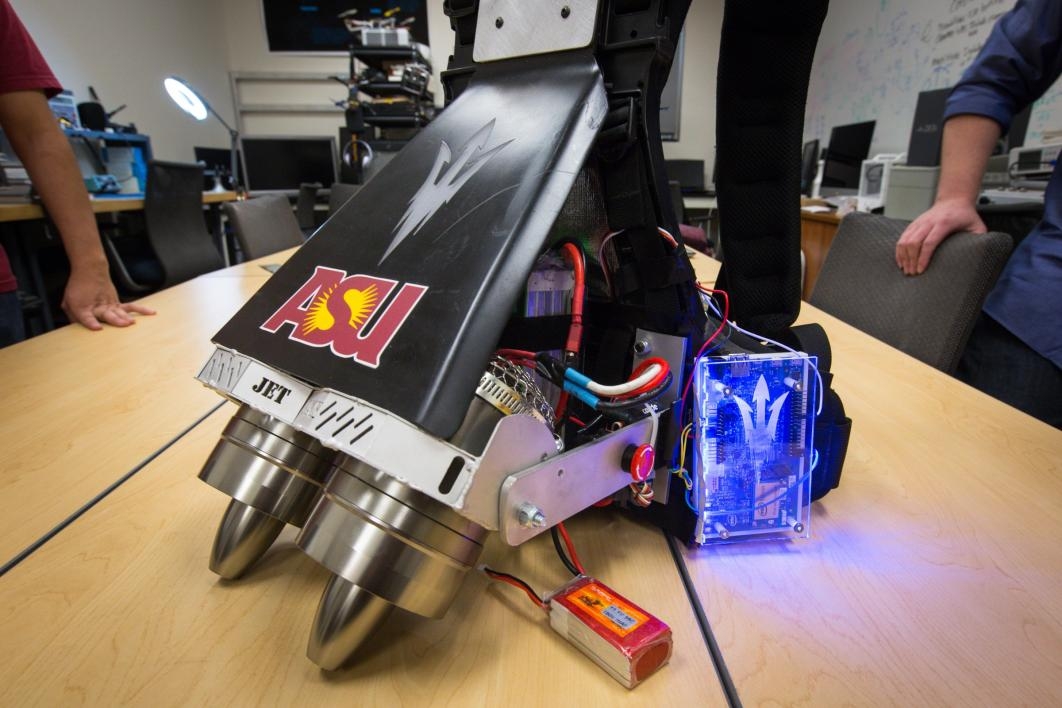 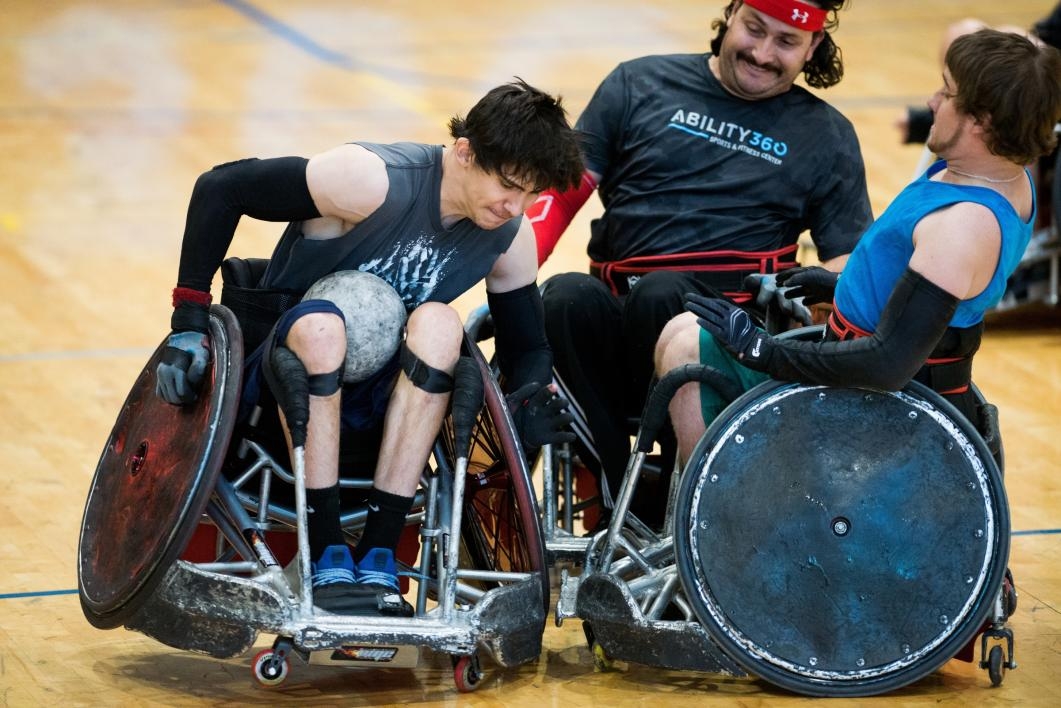 Jake Zunich (left) practices during an Ability360 Heat scrimmage on April 18 at Ability360 Sports and Fitness Center in Phoenix. Emerge event goers will be able to test their ability against athletes on the cutting edge of cultural transformation from Ability 360, one of the three biggest parathlete centers in the country. 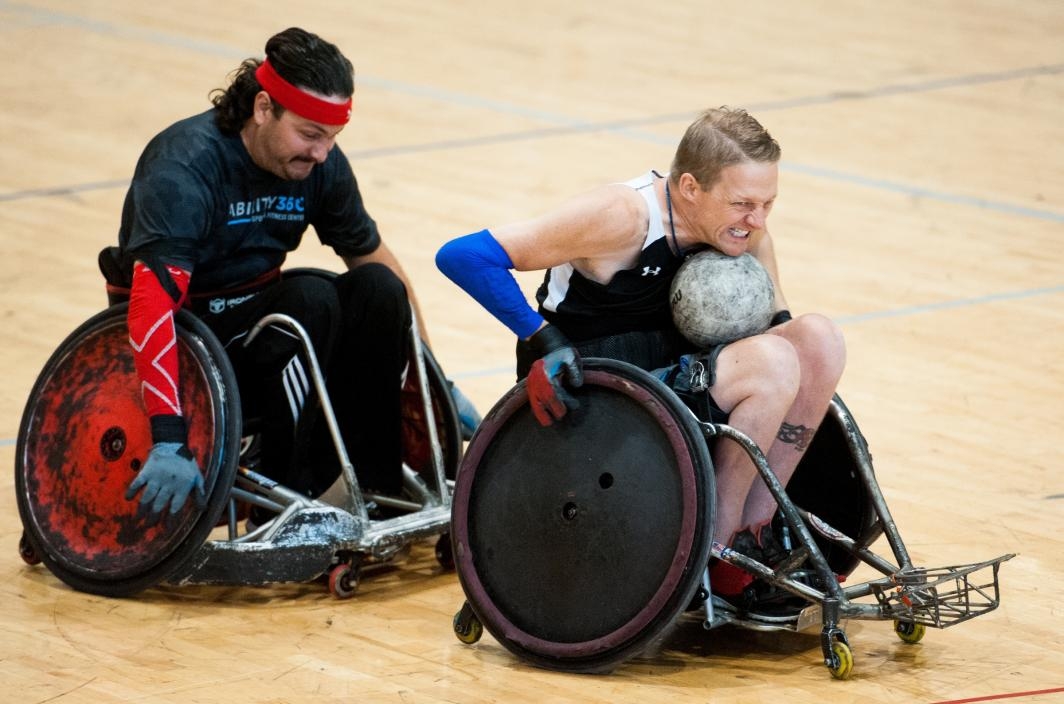 Ability360 Heat captain Scott Hogsett (right) is pursued by Obanel Serrano during practice April 18 at Ability360 Sports and Fitness Center in Phoenix. Future sports won’t be a battle of humans vs. robots, but natural vs. enhanced athletes, researchers say. 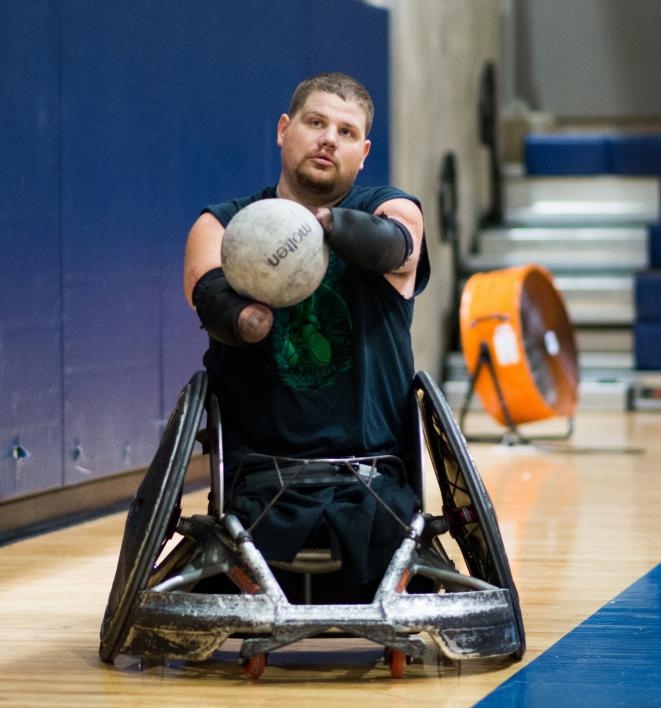 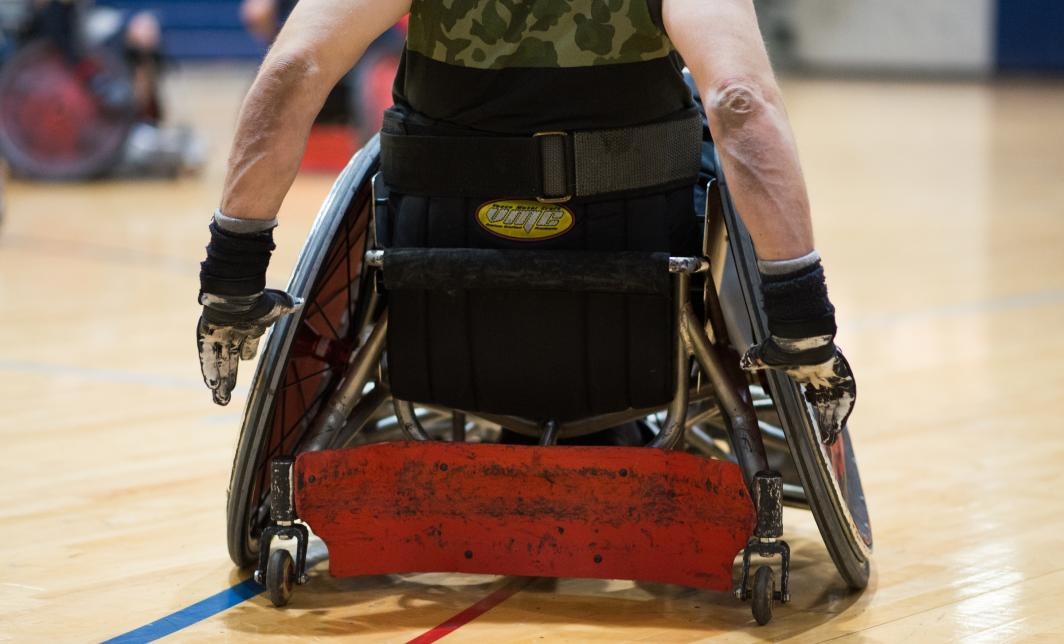 Not just the players, but the chairs get banged up as well at wheelchair rugby. 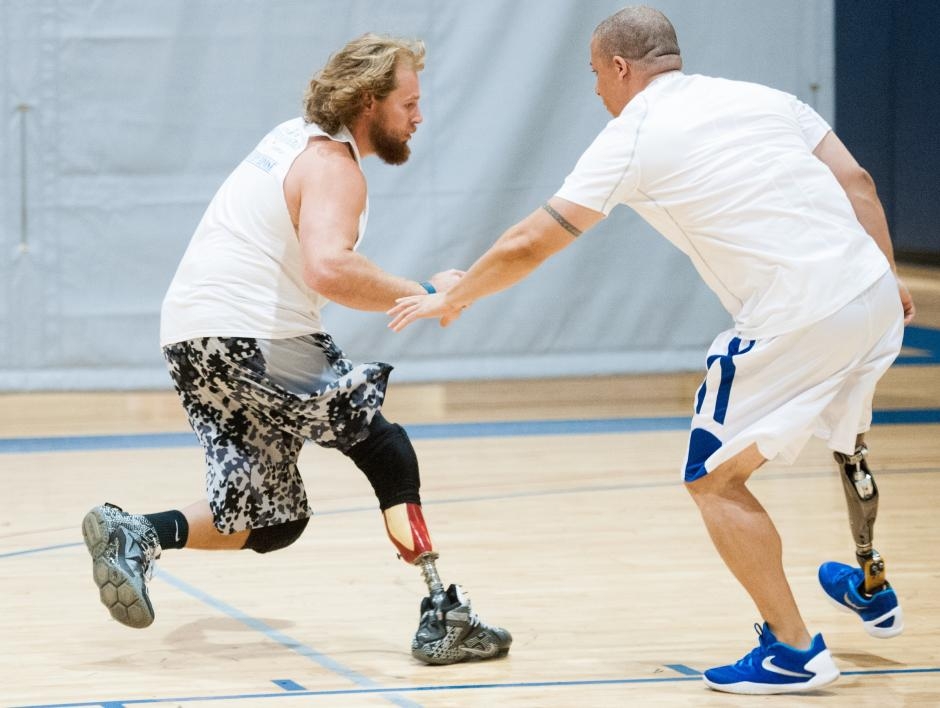 Nick Pryor (left) practices with David Banks on April 18 at Ability360 Sports and Fitness Center in Phoenix. At the Emerge event April 29 at ASU, participants can go head to head with hardcore wheelchair rugby players or see how they measure up on the court against basketball players with advanced prosthetics. 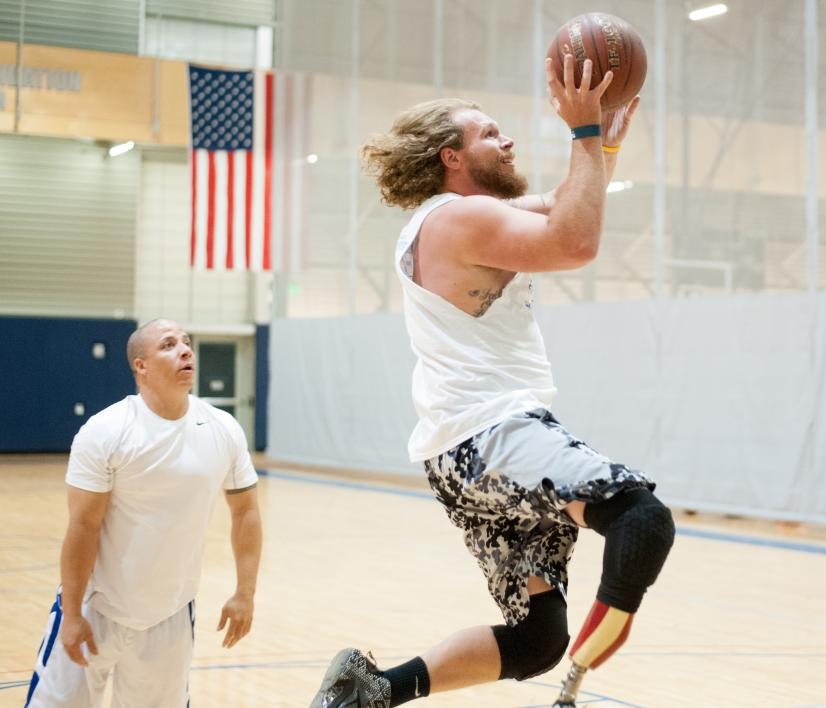 Nick Pryor goes up for a layup on April 18 at Ability360 Sports and Fitness Center in Phoenix.

Among the events at the Emerge festival will be an opportunity to play wheelchair rugby with the national championship team, the Ability360 Phoenix Heat. Garreau calls them “modern-day super cyborgs.”

“Sports fans are the ones who’ve chewed this to death,” Garreau said. “Are enhanced folks like Barry Bonds the same as normal humans? The answer has been no. … Now the question is: Are they super-powered?”

“We used to be disabled athletes,” said Springer, the gold-medalist wheelchair rugby player. “That sucks. Now we’re athletes with a disability.”

Paralympics are raising the sport’s profile, said Scott Hogsett. Hogsett, 43, a player and coach, has played wheelchair rugby for 20 years, 12 of them with Team USA at the Olympics. He won bronzes in Athens and London, and gold in Beijing.

“When we were in London we played in front of 13,000 people and the queen,” he said. “At the end of the day, they don’t see the chair — they just see rugby players.”

As prosthetics continue to evolve, so will the athletes who use them.

“This is not like a museum piece, where you walk up to it politely and stare,” he said. “This form of storytelling is: Imagine we are actually introducing you to someone from 2040, who actually knows what the future will be like. This person is going to tell you what this world is like, and we are going to put you in 2040. ... Accomplishing these things in 2016, when the technology doesn’t exist, is where the imagination comes in.”

It will take less imagination for anyone daring to roll on the court with the wheelchair rugby team, where they can look forward to having the stuffing knocked out of them. 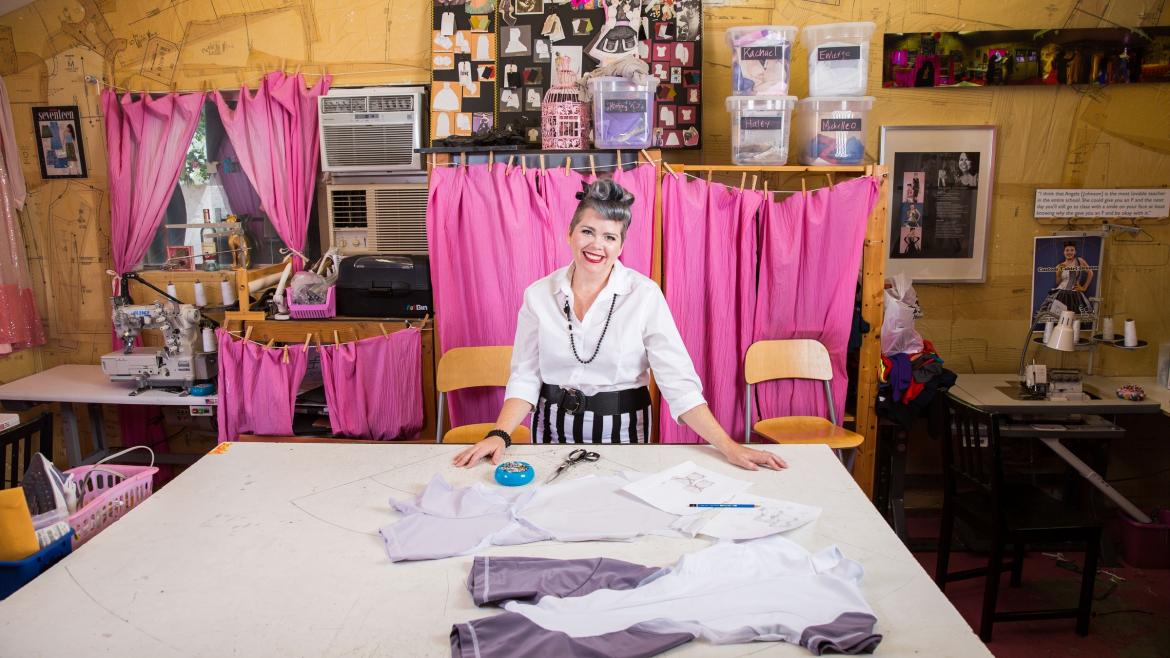 ASU instructor and fashion designer
Angela Johnson with her "uniform of the
future." The textile will act as a video
screen, where a player’s number, team
and sponsor ads would appear digitally.

Gore-Tex, fleece and Capilene changed mountaineering for millions, to the point where people who have never climbed a flight of stairs now saunter down the sidewalk bedecked in North Face. What will sports fashion look like in 2040?

Fashion designers, including faculty associate Angela Johnson, who teaches in the Herberger Institute for Design and the Arts, will present their designs for uniforms of the future.

“I just tried to think of what athletes are wearing now and what could be the next obvious evolution of their garments based on how things have evolved in the past until now, and where technology is headed,” said Johnson, a successful designer in her own right. “Most apparel-related technology is in the textile’s fiber abilities so I went with that, as did the majority of the other designers.”

Johnson’s creation was a jersey/jumpsuit that could be used for many sports. It’s flexible and doesn’t inhibit movement. The textile is the real focus, she said.

“The idea is that the textile will act exactly like a video screen,” she said. “The usual information that you would normally find on an athlete’s jersey like player name and number, team name and logo and sponsor logos, would all digitally appear and scroll along the body of the player like a video. The fabric has the ability to produce any image clearly as a TV screen can.”

Johnson avoided creating something that looked like it came out of a 1950s sci-fi movie. She thought it would be too campy and unrealistic.

“I decided not to because 2040 isn’t really that far into the future,” she said. “I don’t see us wearing things that are that unrecognizably normal. I think that the biggest change will be in the technology of the fibers.”

The event’s “visitations” include:

• Will big data predict the future? If Moneyball was revolutionary for finding overlooked value in past performance, will coming algorithms reliably anticipate the future?

• The future of human enhancement. Featuring today’s astonishing Paralympians whose slogans include “Sport doesn’t care who you are,” and “Disabled or super-human?”

• New sport 2040. What will the next big competitions be? And how will climate change shape new sports?

• The rise of intentional danger in sport 2040. If we conquer concussions and other perils, will some actively seek out more threat in their sport action? “Hunger Games” for real?

• The future of fun 2040. Winning is not everything. Good times matter. A lot. What will future playgrounds for kids and alleged adults and even senior citizens look like?

• The future of stadiums. Humans will always love to come together to share intense emotion. What does Las Vegas tell us about the future of our arenas?

• The future of simulation and virtuality. Fantasy football and eSports are only the beginning. Will sport have as many meanings as Orson Scott Card’s “Ender’s Game”?

• Go team! A live presentation from the Science Cheerleaders representing more than 300 NFL/NBA cheerleaders pursuing STEM careers, who will be cheering on the future of sports, introducing their new Science of Cheerleading e-book and promoting citizen science.

• “The Future of Cheating.” An interactive new sport experience,  this is a live game that imitates the characteristics of cancer moving through the body.

Admission: The event is free and open to all, but registration is requested. RSVP here: http://bit.ly/2016EmergeRSVP.

Is a group like Black Lives Matter hurt when a “lone wolf” shoots and kills police officers in New York? Are peaceful advocates of Pro Life laws hurt when a “lone wolf” kills people at an abortion clinic in Colorado? Or does the emergence of political actors willing to use violence to advance a cause make the peaceful advocates of political change appear more moderate? Researchers from the...

Is a group like Black Lives Matter hurt when a “lone wolf” shoots and kills police officers in New York? Are peaceful advocates of Pro Life laws hurt when a “lone wolf” kills people at an abortion clinic in Colorado? Or does the emergence of political actors willing to use violence to advance a cause make the peaceful advocates of political change appear more moderate? Researchers from the Four Corners states (Arizona, Colorado, New Mexico and Utah) recently gathered in Tempe to discuss this and other issues.

The event was the inaugural conference for the recently created Four Corners Conflict Network, an interdisciplinary group of faculty and doctoral students at universities in the four corners states who study political conflict. ASU's School of Politics and Global Studies (SPGS) hosted about 40 researchers. 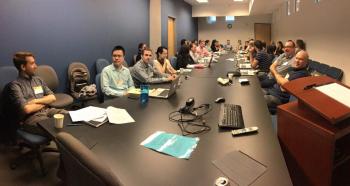 During the morning the group debated ways to improve our understanding of the impact that the rise of a violent faction has upon the fortunes of activists who are using non-violent tactics to pursue political change. While no breakthroughs emerged from the discussion, it served as a stimulating kickoff for a full day of critique and commentary on ongoing research projects that explored issues ranging from government's efforts to monitor and repress online activity to ISIS's network structure and how it impacts violence committed by the group.

The group enjoyed a robust series of both formal and informal discussions. Many of the visitors stayed through Saturday and enjoyed a morning hike in the valley's South Mountains. These sorts of gatherings not only improve ongoing research projects, but frequently spur ideas for new efforts.

SPGS was delighted to be able to host the inaugural conference and highlight our growing expertise in the study of political conflict, human rights, and related areas.

Written by Will H. Moore