Each year, President Crow honors members of the ASU community who have contibuted innovative ideas to the good of the university. Watch the highlights of that video here.

From farm to factory: Where food comes from now

If you’ve seen the words “artisanal” or “local” on a menu, thank Michael Pollan for that.The author, journalist and food activist — named one of the 100 most influential people in the world by Time magazine — gave a talk Thursday as part of the 10th-anniversary celebration of Arizona State University’s School of Sustainability.Pollan writes about the intersection of food and cultur... 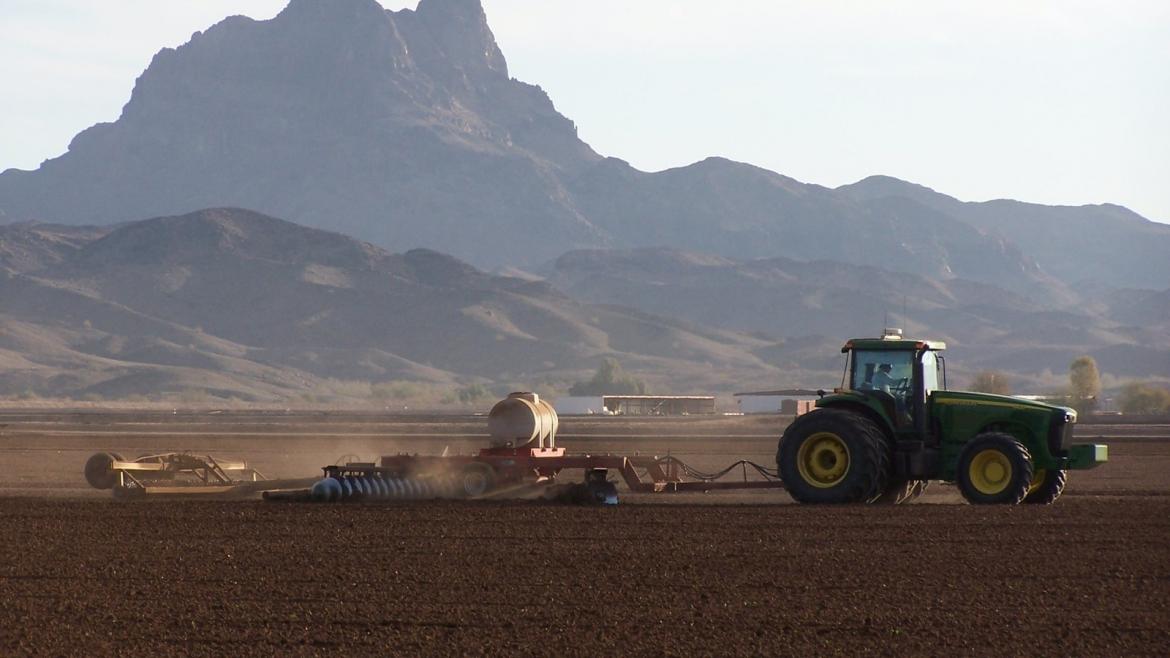 From farm to factory: Where food comes from now

Tempe campus
One of Time's "most influential people in the world" speaks about food at ASU.
Producing food is contributing to climate change, says food activist Pollan.
If you enjoy your fast-food french fries, you might want to stop reading.
April 14, 2016

If you’ve seen the words “artisanal” or “local” on a menu, thank Michael Pollan for that.

The author, journalist and food activist — named one of the 100 most influential people in the world by Time magazine — gave a talk Thursday as part of the 10th-anniversary celebration of Arizona State University’s School of Sustainability. 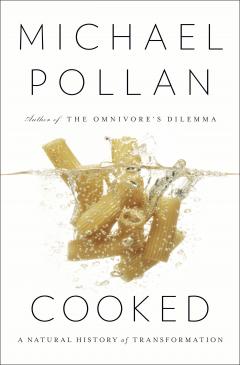 Pollan writes about the intersection of food and culture: on our plates, in our farms and gardens, and in the built environment. He is the author of five New York Times bestsellers: “The Omnivore's Dilemma,” “The Botany of Desire,” “In Defense of Food,” “Food Rules” and, mostly recently, “Cooked.”

Industrial farming in the past 60 years has shifted from being based on sunlight to being based on oil, Pollan said. He revealed some of the things he has learned about food in 15 years of studying it, all without coming across as judgmental.

Along his monumental journey from farm to table, he visited an Idaho potato farm of 10,000 acres. Coming from New England, where farms maybe top out at 200 acres, it was a shock to Pollan. This farm was pivot-irrigated (those circles you see from planes) in 135-acre plots. The farmer operated controls from a cement blockhouse that controlled flows of water, fertilizer and pesticides. He told Pollan he couldn’t go into a field for five days after applying pesticides because they were so toxic. Pollan asked what the pesticides were intended to fight.

It turned out to be net necrosis, which is purely an aesthetic blight. The farmer said he sold his crop of Russet Burbanks to McDonald’s. The company likes long, unblemished golden fries spilling out of paper cups in a bouquet. Russet Burbanks are the longest potatoes, so they produce those long fries people love.

In a potato barn on the same farm, the crop was stored in mountainous piles. Pollan asked why it wasn’t just shipped off after harvest. The farmer told him the potatoes had to sit for six weeks, to let them “off-gas” the pesticides, like new wall-to-wall carpeting.

“Wow,” Pollan said. “That’s how we produce french fries in this country.” 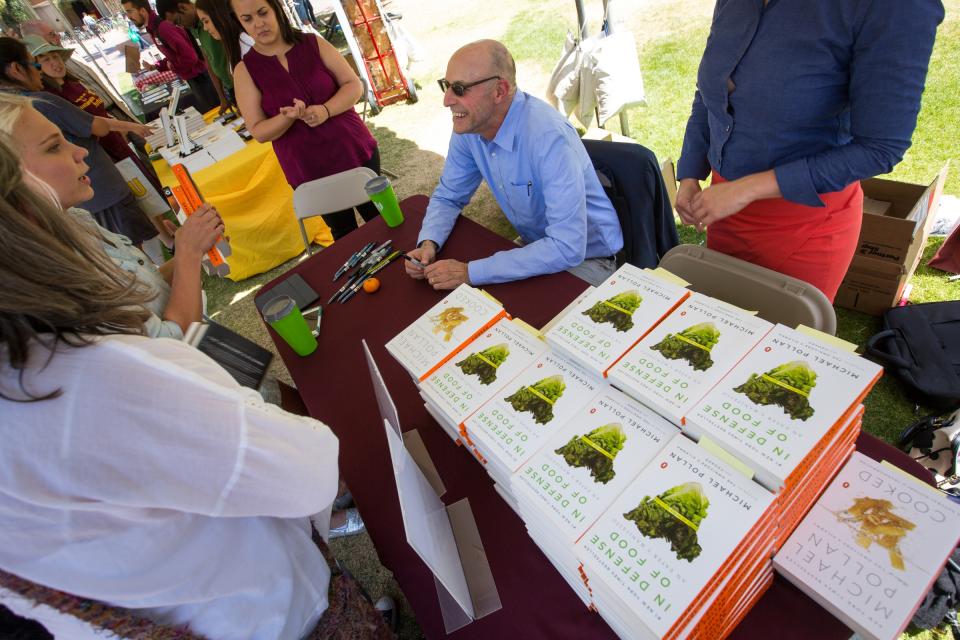 Food activist Michael Pollan signs copies of his books and chats with fans at the celebration of the 10th anniversary of the School of Sustainability on Hayden Lawn on Thursday, April 14, in Tempe. Photo by Charlie Leight/ASU Now

“It’s a simple question,” he said. “Where does your food come from? Fifty years ago it was a simple answer.”

“The ecology of these systems changed” from photosynthesis (which Pollan admits is still important) toward one organized around the logic of industry.

The classic farm that almost everyone pictures when the word “farm” appears (red barn, green crops, white fences, happy chickens running around) was powered by sun and animals, with “few inputs from off the farm” like seeds and diesel.

After World War II, this system began to die off. There were more mouths to feed, and people also wanted to eat foods in plenty that had been rationed during the war, like meat, eggs, butter and sugar. Wartime industry was converted into food production. One factory literally went from making bombs to fertilizer, according to Pollan.

“It has also subsidized a drop in wages,” Pollan said.

Corn and soy are grown in vast quantities, but not for direct consumption, Pollan said. They’re grown for corn syrup and additives. The weird ingredients on the Twinkie label are all corn- and soy-based, according to Pollan.

Processing food removes nutrients and fiber. “What we’re subsidizing with our agricultural policies is fast food,” he said.

And fast, processed cheap food has created its own set of problems. There are 300 to 500 more calories per day in the average American’s diet from corn. The result is the rise of obesity and diabetes.

“This flood of cheap food has led to four of the top-killing chronic diseases,” Pollan said.

Producing food is contributing to climate change, he said. Between machinery, processing, shipping, chemical production and a host of other factors, 10 calories of fossil fuel are required to produce three calories of food.

Walmart looked at its carbon footprint and found the biggest impact was not from heating and cooling its giant stores or running its huge truck fleet, but the nitrogen spread on corn put into the products they sell.

Organic farms are no better — and sometimes worse — than non-organic farms when it comes to carbon release, according to Pollan.

“It’s important to realize the rules (for organics) are a reflection of their time,” Pollan said. “Climate change was not on the radar.”

He did encourage people to eat organic, especially pregnant women and young children.

“As long as the sun shines, there is that free lunch,” Pollan said.