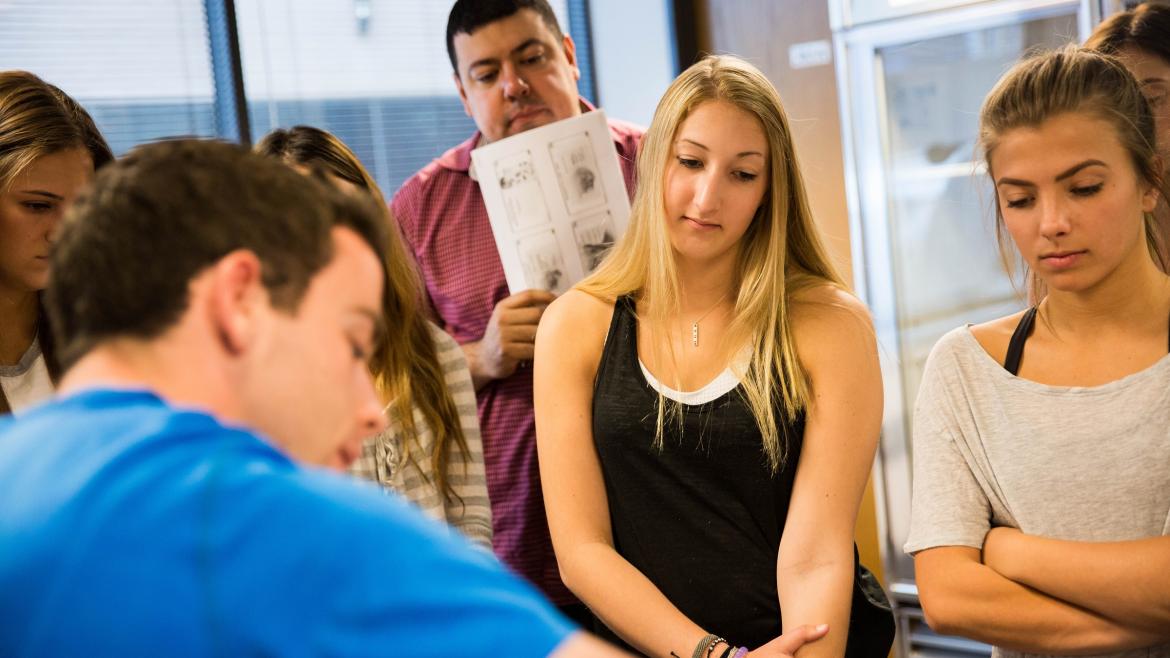 Year One: Life at ASU — Hannah keeps it real

Editor's note: In "Year One: Life at ASU," we follow five freshmen through their first year at Arizona State University in an occasional photo series. This is the latest for one of them, Hannah Kieling.

Training to be a nurse means learning all about the human body and its many functions; in Biology 201, students such as Hannah Kiesling covered the cranial nerves and prepared for upcoming exams. The instructor, Matt Speer, also took them for a visit to the cadaver lab, demonstrating the muscle anatomy of the arm.

Kiesling is the only freshman research intern in a study with Felipe Gonzalez Castro, studying how the “Keepin It Real” substance-abuse prevention program has been adapted at a local level with teachers in Pennsylvania and Ohio. Through her work there, Kiesling has learned to interview participants in a research study without influencing answers through body language or responses, as well as how to do independent work with upperclassmen and graduate students in a professional environment. 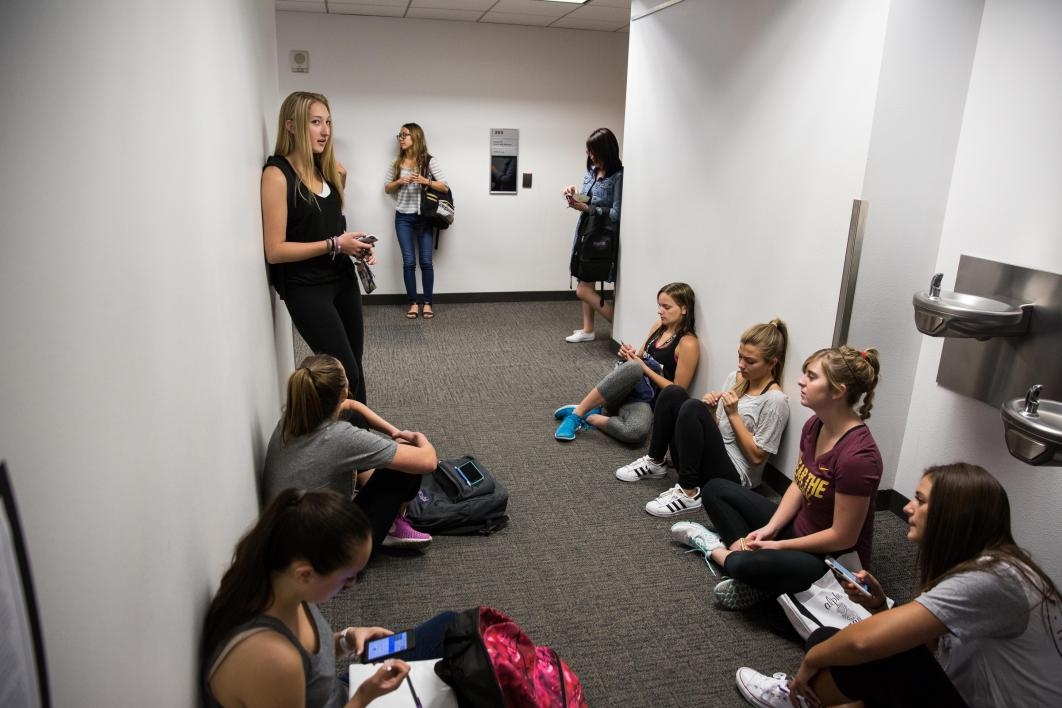 Hannah Kiesling waits for her teacher to arrive outside her anatomy class on the Downtown Phoenix campus. 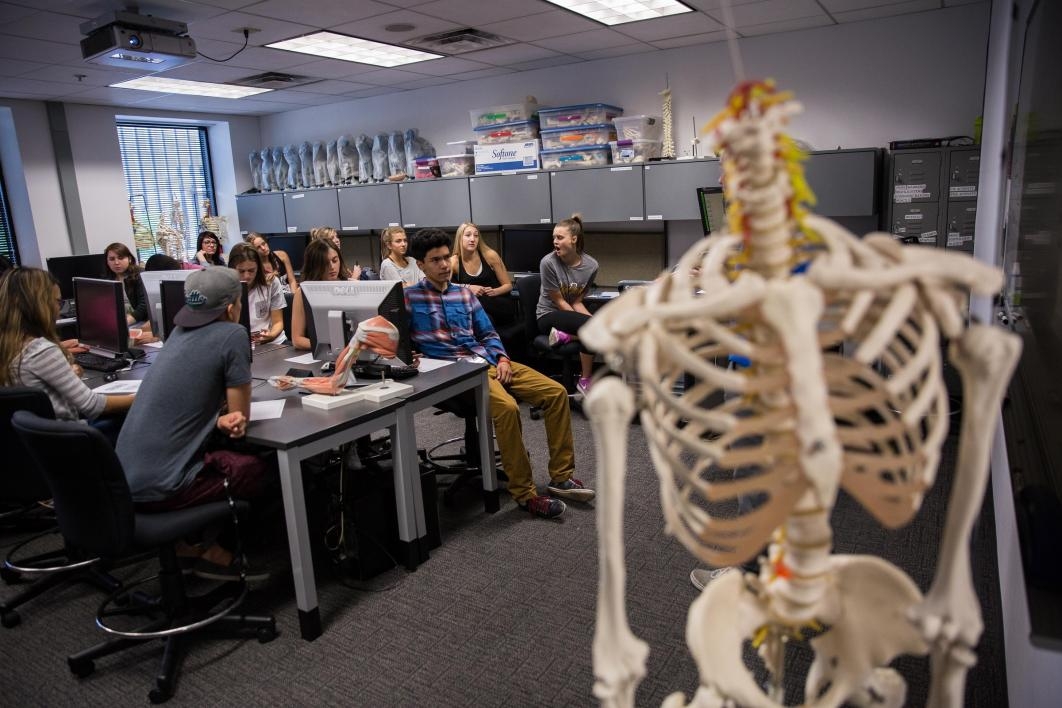 The day's topic: Cranial nerves. Kiesling and her class prepare to learn about the 12 pairs of nerves that emerge directly from the brain. 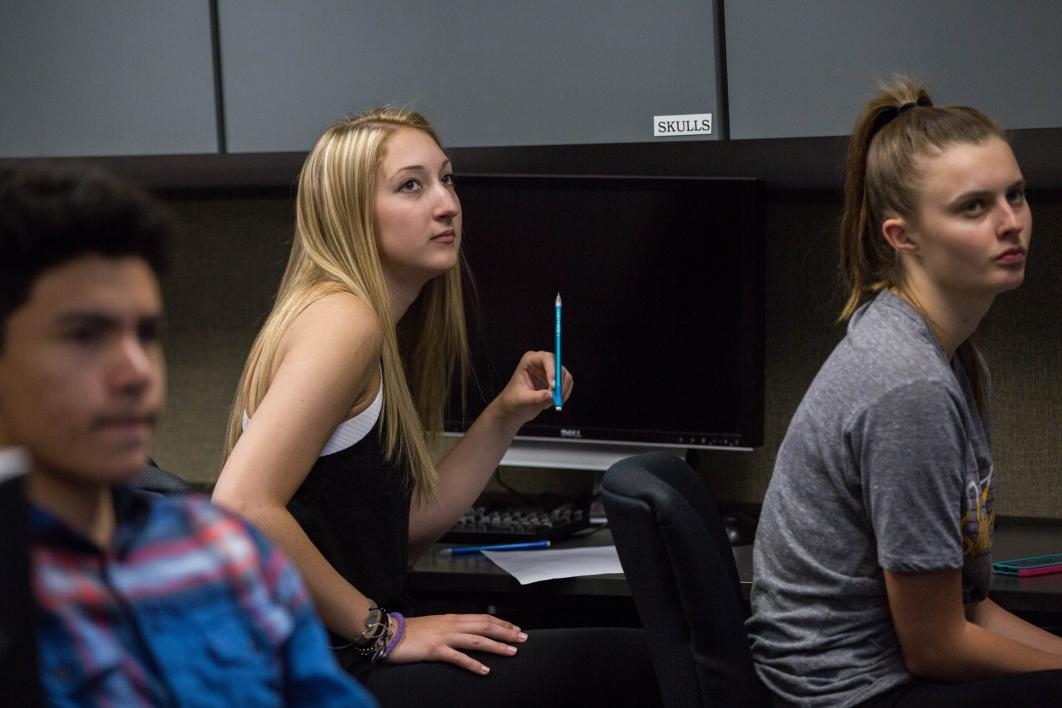 Kiesling listens to the lecture and takes notes on cranial nerves during her Biology 201 class. 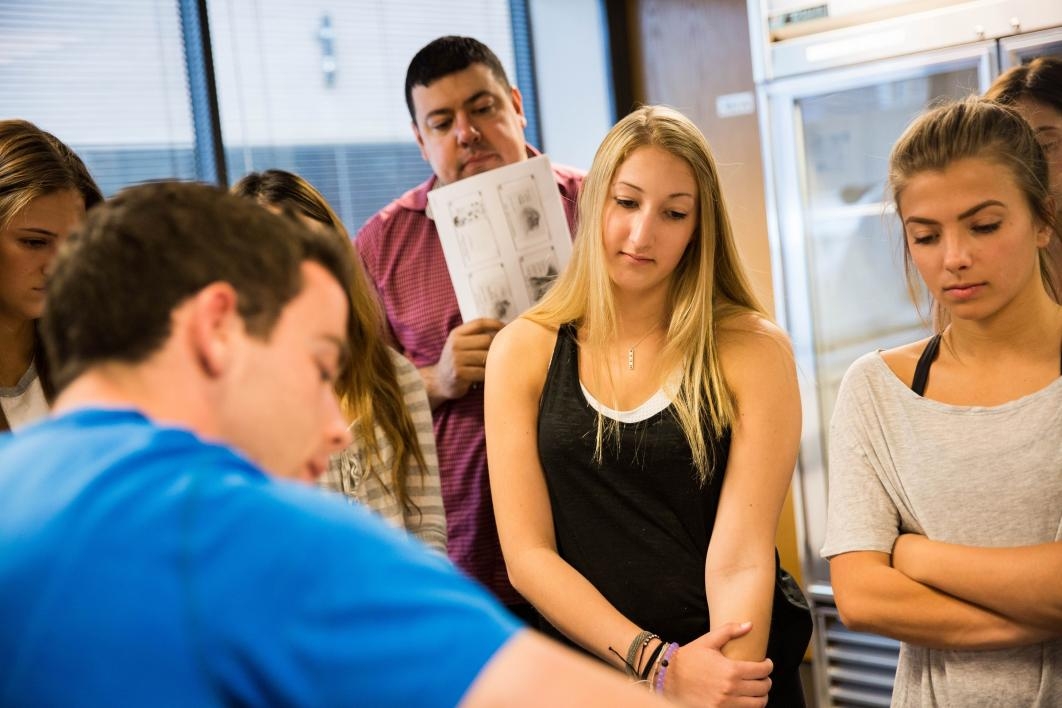 Instructor Matt Speer (left) leads a lab with a cadaver for Kiesling and her classmates, to better illustrate the muscles they are studying. 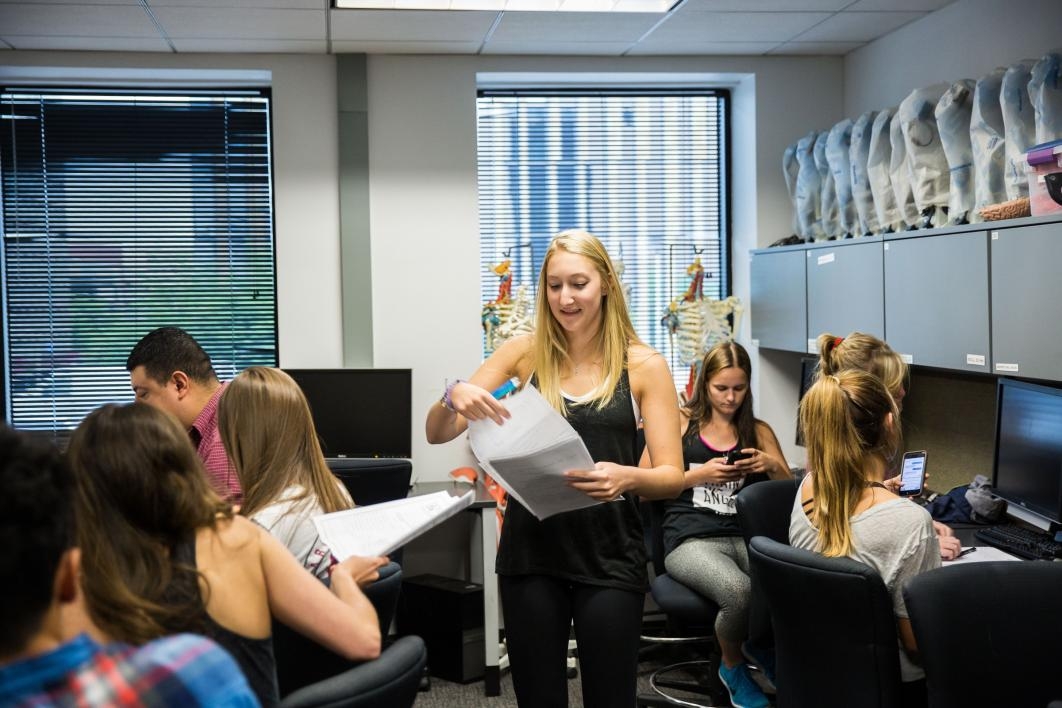 Kiesling collects her classmate's worksheets at the end of anatomy class. 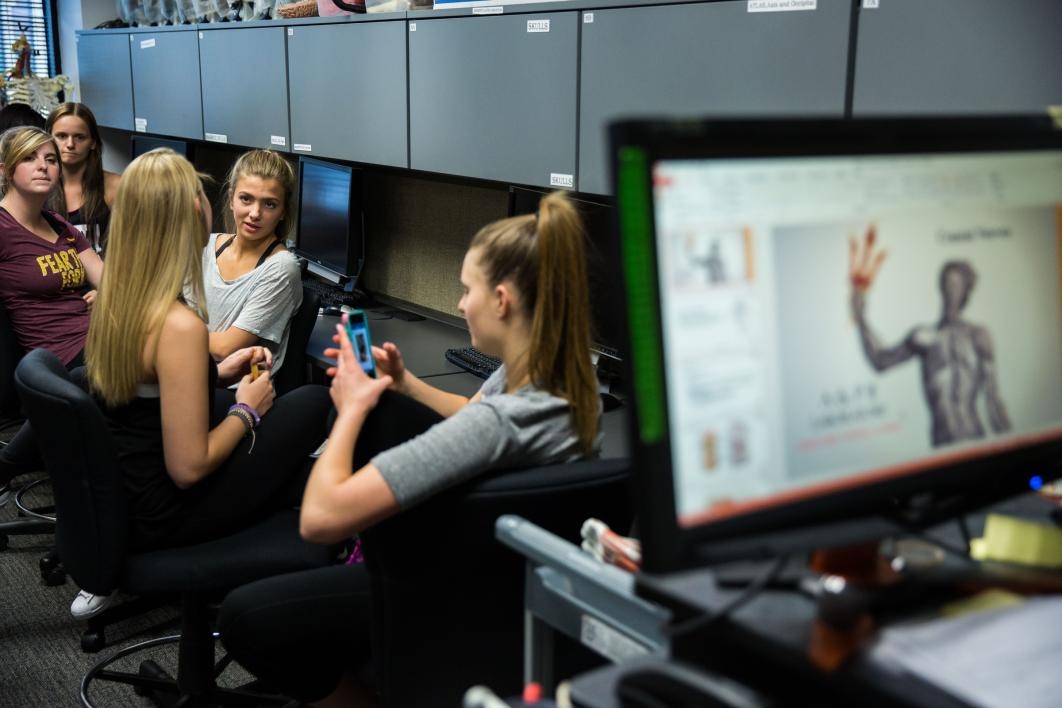 Kiesling chats with her neighbors as their anatomy class wraps up on March 28. Kiesling (right) looks over the agenda that senior nursing student Carly Cutshaw just handed her in a meeting with Felipe Gonzalez Castro. Kiesling is a research intern helping to study how the “Keepin It Real” program has been adapted at a local level with teachers in Pennsylvania and Ohio. 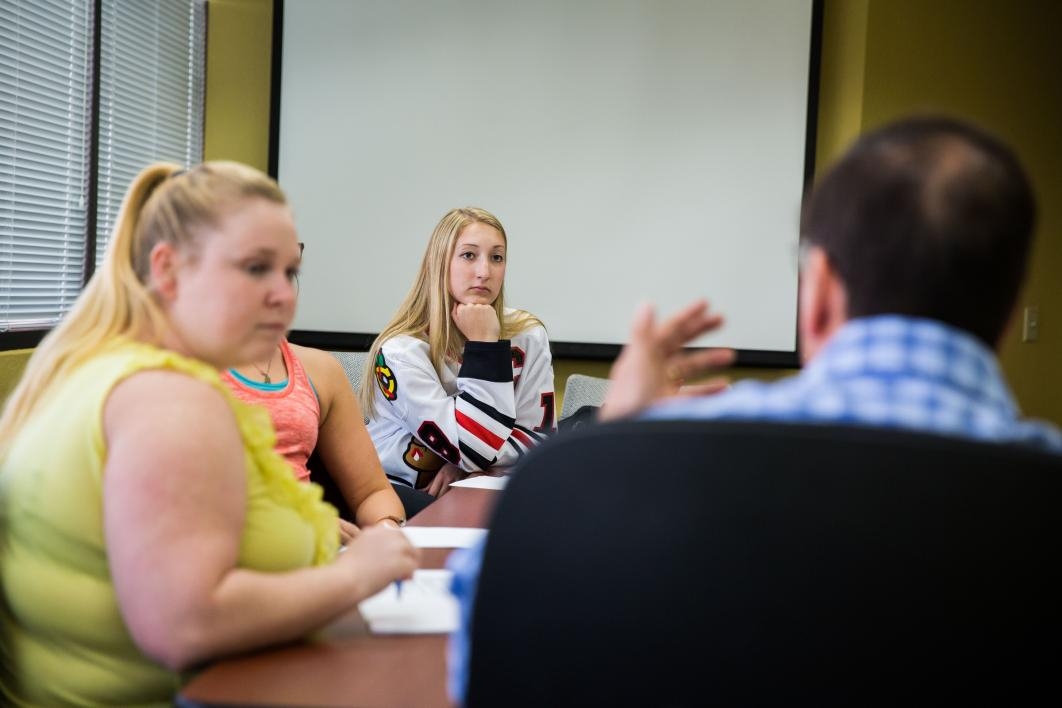 Kiesling (center) listens to Castro talk about interview skills for their research during a meeting at the College of Nursing and Health Solutions on the Downtown Phoenix campus. 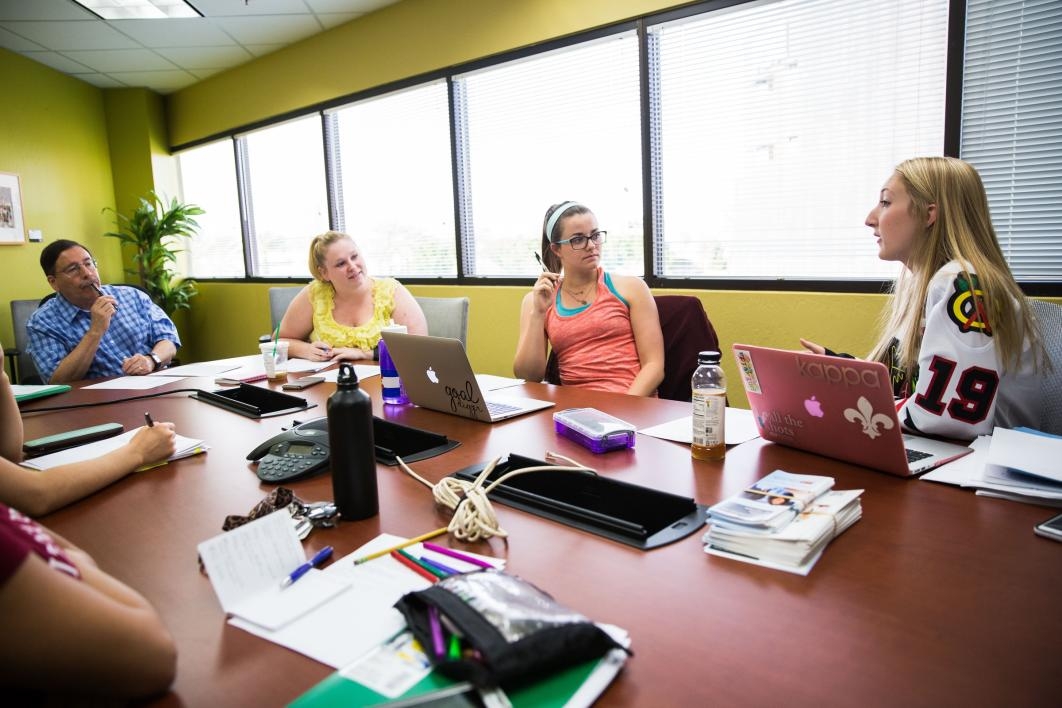 Kiesling talks about possible future conferences where their research poster can be displayed.

Bruce Merrill, a nationally known pollster and researcher who taught at Arizona State University for four decades, died Saturday from complications due to cancer. He was 78.Merrill joined ASU in 1970 and taught in the Department of Political Science, the Center for Public Affairs, the Department of Communication and the Walter Cronkite School of Journalism and Mass Communication before retiring in...

Bruce Merrill, a nationally known pollster and researcher who taught at Arizona State University for four decades, died Saturday from complications due to cancer. He was 78. 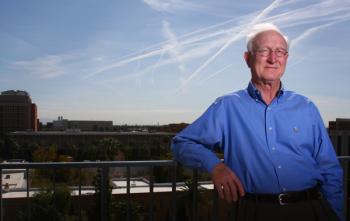 Bruce Merrill, who taught at ASU for four decades, died Saturday from complications due to cancer. Download Full Image

Merrill was a respected figure in regional and national politics, conducting polling for more than 100 campaigns, which included President Richard Nixon and U.S. Sen. Barry Goldwater, Gordon Allott, Pete Domenici, Peter Dominick and John Tower, among others. In 1972, he received a presidential appointment from Nixon to the Population Advisory Committee, which directs the work of the Census Bureau.

“Bruce brought a wonderful dimension to the Cronkite School when he joined our faculty,” said Cronkite professor Douglas Anderson, who served as the school’s director from 1987-1999 and helped bring Merrill to Cronkite. “He was, of course, best known for his polling work — and for the reach and quality of his work. He really knew his numbers — and he could convey them, with precision and comfort, to experts, as well as lay readers and listeners. He was also a very gifted teacher, working comfortably and effectively with undergraduate and graduate students.”

At ASU, Merrill was known for establishing the nonpartisan Cactus State Poll, later known as the Cronkite/Eight Poll, on Arizona PBS. The monthly poll has kept an accurate pulse of Arizona voters for more than 20 years. He joined the Cronkite School in 1988, using the poll as an educational tool that taught students how to design surveys and interpret data.

James Simon, a 1993 ASU alumnus who serves as dean of the New York Institute of Technology’s College of Arts and Sciences, studied under Merrill for his master’s degree and doctorate. Simon, who worked with Merrill on the Cactus State Poll, said his mentor had a gift for explaining important polling information.

“Bruce accomplished the impossible of making numbers interesting, even for people not good at math,” he said. “He was able to tell a story about a poll without getting bogged down by percentages. He could make it engaging and show why it mattered to the average person watching TV.”

Merrill was born on May 13, 1937, in the southeastern Arizona community of Pima. After World War II, his family moved to Grants Pass, Oregon, where he graduated from high school in 1955. He received a scholarship to play tennis at the University of Oregon, where he studied mathematics. He then went on to serve as an officer in the U.S. Navy.

Following his service, he earned a master’s degree in political science from Brigham Young University and a doctorate in political behavior from the University of Michigan, where he trained at the Institute for Social Research.

Ted Simons, host and managing editor of the Arizona PBS news program “Arizona Horizon,” regularly discussed the results of the polls with Merrill, noting he was genuinely curious about the public’s reaction to current events.

“He understood what people look for in polling data and was trusted to provide accurate, unbiased results,” Simons said. “That trust helped shape public policy in the state by reflecting public moods and sentiments on a variety of issues and candidates. By doing what he did well, he made a real difference in Arizona — a life well lived.”

Merrill is survived by his wife, Janis Sandler Merrill; daughter Kathryn Sorensen; son Christopher Merrill; his wife’s children, Laura Sonius, Brian Sandler and Heather Lautt; and a host of grandchildren from both sides of the family.