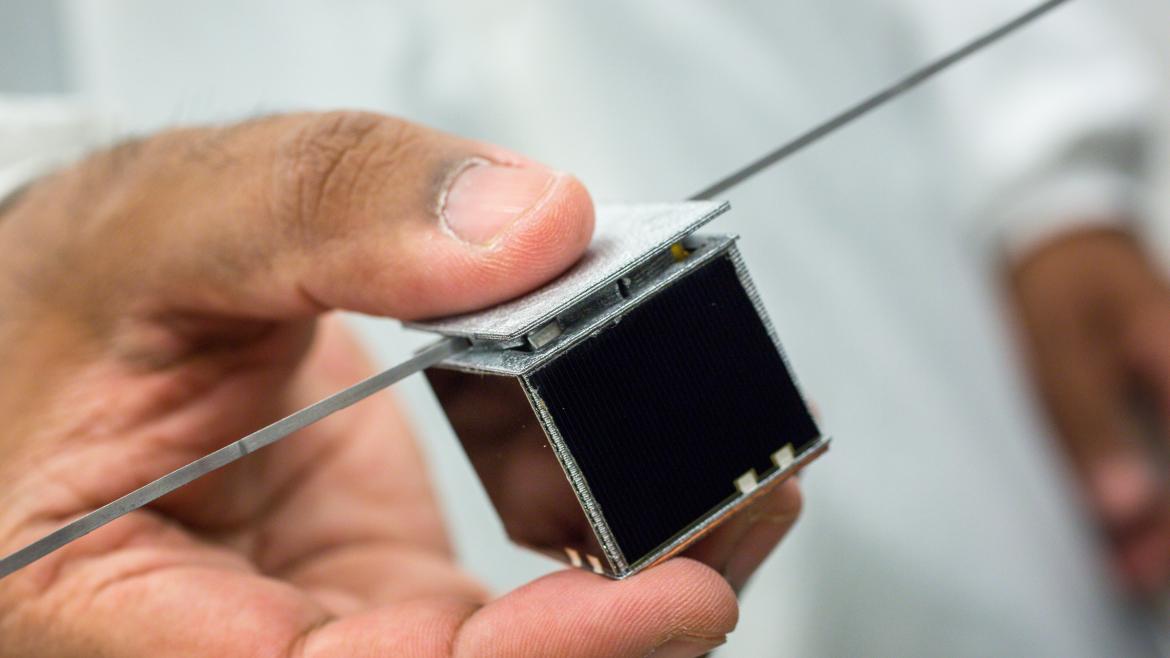 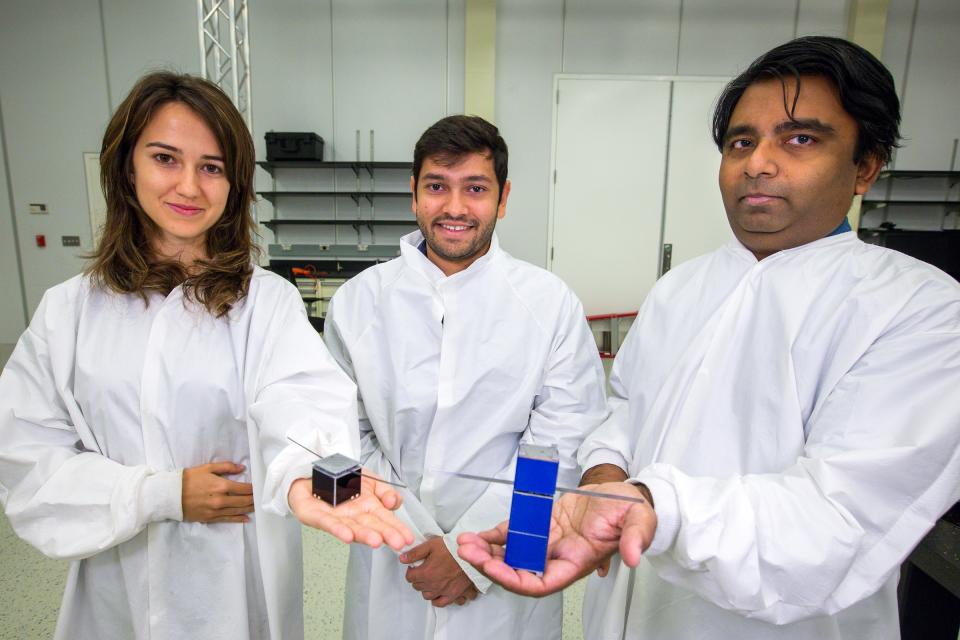 As artificial intelligence and robotic systems become more prevalent, it’s increasingly important that they work well with others — especially humans.Automated planning is a field of automated intelligence (AI) research that looks to generate a plan that takes into account a system’s environment and possible actions it can take to achieve a given goal. However, automated planning research th...

As artificial intelligence and robotic systems become more prevalent, it’s increasingly important that they work well with others — especially humans.

Automated planning is a field of automated intelligence (AI) research that looks to generate a plan that takes into account a system’s environment and possible actions it can take to achieve a given goal. However, automated planning research thus far hasn’t addressed problems that may arise when humans and autonomous systems interact, which is essential when the goal of AI is to have intelligent machines work alongside people and not replace them. 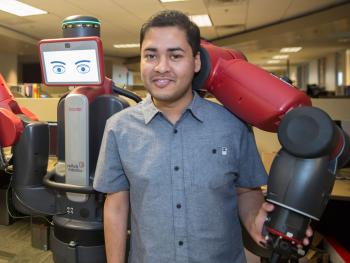 Computer science graduate student Tathagata Chakraborti is working to address the challenges of human-AI collaborative planning, or “human-in-the-loop planning.” Working together requires AI systems to be able to model human intentions and plan their actions with those intentions in mind. So Chakraborti is studying how planners model collaborative behavior and the role of planners as decision support.

“I have investigated how autonomous agents sharing the human workspace can modify their behavior and respect human intentions,” Chakraborti says. “I have also looked at planning challenges in guiding human decision-making with limited domain knowledge, such as in crowdsourced planning and disaster response.”

Chakraborti works in Professor Subbarao Kambhampati’s Yochan Lab where he and other computer science students test their planning algorithms (“Yochan” is the Sanskrit word for “plan”) for human-robot collaboration with several robots: “Kramer,” a one-armed, mobile industrial robot; “Newman,” a two-armed industrial robot with a programmable display “face”; “Sprinkles,” a mobile robot designed up help with office tasks through speech recognition that can also recognize faces; and the “Clone Troopers,” a fleet of small humanoid robots used for various projects. The robots were procured with the help of Defense University Research Instrumentation Program (DURIP) grants from the Office of Naval Research and the Army Research Office. 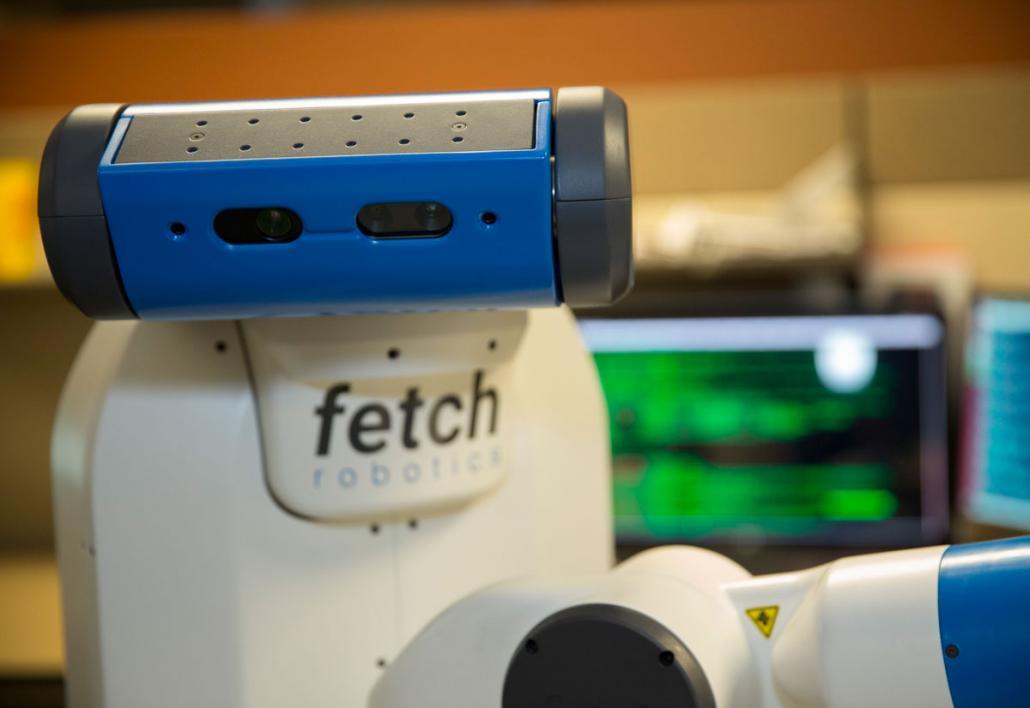 Industrial robot Kramer is designed for use in places like an Amazon warehouse. Photographer: Pete Zrioka/ASU 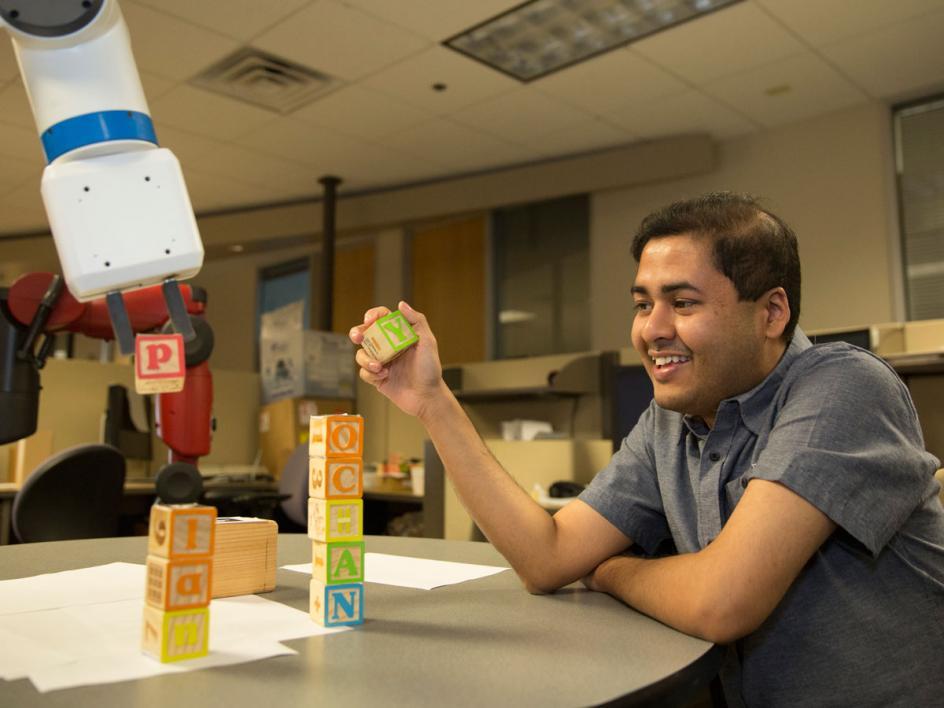 Kramer and Chakraborti work together to spell out "Yochan" and "plan" in building blocks. The Yochan lab's name comes from the Sanskrit word for "plan" — creating plans for robots to work with humans is the lab's main area of interest. Photographer: Pete Zrioka/ASU

An opportunity to continue his robotics research outside of ASU

“This is a great opportunity to work on my ideas with people who share the same vision of the future of AI — that AI and humans together can do better than the sum of individuals,” Chakraborti says.

Part of the Fellowship involves working with an IBM mentor. For Chakraborti this is Kartik Talamadupula, a research staff member at IBM who is also an alumnus of the Yochan Lab. Talamadupula’s research, conducted at IBM’s T.J. Watson Research Center, investigates the role of automated planning in guiding dialogue between intelligent machines and end users.

Chakraborti and Talamadupula have similar research interests and they’ve worked together before on co-authored conference and workshop papers, but it’ll be Chakraborti’s first time working with Talamadupula and IBM directly on-site.

IBM also encourages its PhD Fellows to participate in an internship, which Chakraborti plans to do starting in May at IBM’s Cognitive Algorithms Department, where he’ll join the AI and Optimization group and work on symbiotic human-AI systems.

“It’s always great to have some extra funds — it lets you be more creative with your ideas and more ambitious in trying them out,” Chakraborti says.

Overall, he sees the award as honoring his past work and providing opportunities for his future.

“It’s a great honor to be considered for this prestigious award,” Chakraborti says. “The award is a recognition of the quality of work done here at ASU and the effort I have put in for the last two and a half years, and it’s a huge motivation to work even harder and continue innovating for the coming years.”

Kambhampati nominated Chakraborti, whom he calls a “star” student and “good citizen” of the department, for the award. IBM PhD Fellows are selected based on their “overall potential for research excellence” as well as demonstrated progress through publications, criteria Chakraborti meets with ease.

“He came with an unusually impressive publication record right out of his undergraduate study and has continued to build on that,” Kambhampati says.

Since entering the computer science doctoral program in 2013, Chakraborti has already presented his work in several international forums, published papers as part of international conferences and peer-reviewed workshops, and collaborated with NASA and other research centers and universities.

He has also earned two University Graduate Fellowship Awards from the School of Computing, Informatics, and Decision Systems Engineering as recognition for his work.

“His dissertation will enable better symbiotic workspaces between humans and robots and provide pathways to augment human intelligence for effective synergy,” Kambhampati says.

“He is a great sounding board and I consider him more a post-doctoral colleague than a graduate student,” Kambhampati says.

Plans for the future

After their fellowship period, doctoral students have the opportunity to be nominated for another IBM PhD Fellowship award. Chakraborti is still getting ready to start his work with IBM, but he says he would be happy to do more with them later in his academic career at ASU.

The next stage in his research at ASU is to work on the human side of the AI-human team by validating theoretical results on biological data like electroencephalogram (EEG) tests to establish psychological or neuroscientific connections to how humans respond to robotic teammates.

“This is vital in order for AI algorithms to move from the drawing board to actual integration with human workflows,” Chakraborti says. “I believe that my research will contribute significantly to the progress of standalone automated planners toward addressing the requirements of the human component, and provide much needed guidance for principled and well-informed design of intelligent symbiotic systems of the future.

Chakraborti says he isn’t sure what he’ll do after he earns his PhD, which he expects to in 2018, but he says he does know he wants to pursue his love of research either in academia or industry, and maybe even at IBM.

“The work done at IBM research is extremely well aligned with my own research interests, so I wouldn’t be surprised if I end up there!”