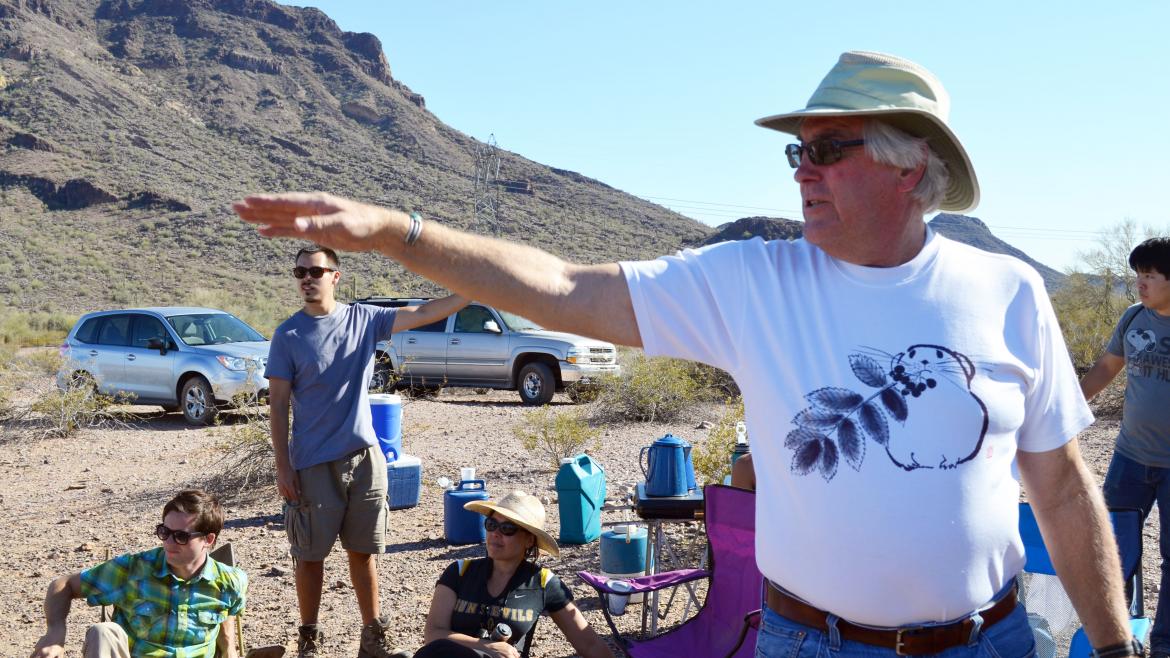 'Never take your eyes off the fox'

Before retiring, ASU professor Smith takes students on one last camping trip where he shares his love of fieldwork and animals

About 60 miles west of Phoenix in a rugged desert range north of Interstate 10, six vehicles disgorge 22 students, two faculty members, and a few others tagging along. In about 45 minutes, dome tents dot the desert hardpan, a heap of firewood has been assembled and a fire ring built.

This is Smith’s last trip taking students out in the field to learn how to trap and handle animals for study. After 40 years, he is retiring. A President’s Professor and Parents Association Professor in the School of Life SciencesThe School of Life Sciences is an academic unit of the College of Liberal Arts and Sciences. Smith is also a distinguished sustainability scientist in the Julie Ann Wrigley Global Institute of Sustainability. at Arizona State University, he specializes in lagomorphs — rabbits, hares and pikas — but knows about pretty much any critter you can name.

“Animals are really phenomenal,” he says.

BIO 410 — Techniques in Conservation Biology and Ecology — is one of the Smith’s most popular classes besides mammalogy. After all, you get to hold a fox and a kangaroo rat.

With camp set up, everyone takes a break and waits. Students toss around a football, munch potato chips and bask in the sun. No one is on a phone. Smith explains the need to wait before setting the rodent traps, so the animals aren’t in there too long. Every technique he discusses with the students is designed to be as considerate as possible to the animals.

Everyone is to mark his or her traplines with neon green flagging tape. When Smith worked in Tibet studying pikas, he spent half a day laying out a perfect grid with the tape. He returned only to find it all gone. The local Tibetan women were quite fond of weaving the colorful tape into their hair and the manes of their yaks. He ended up using yak dung as markers.

The students wander out into the desert and set their traps, baited with grain. In the morning they will hold a few pocket mice and some kangaroo rats. 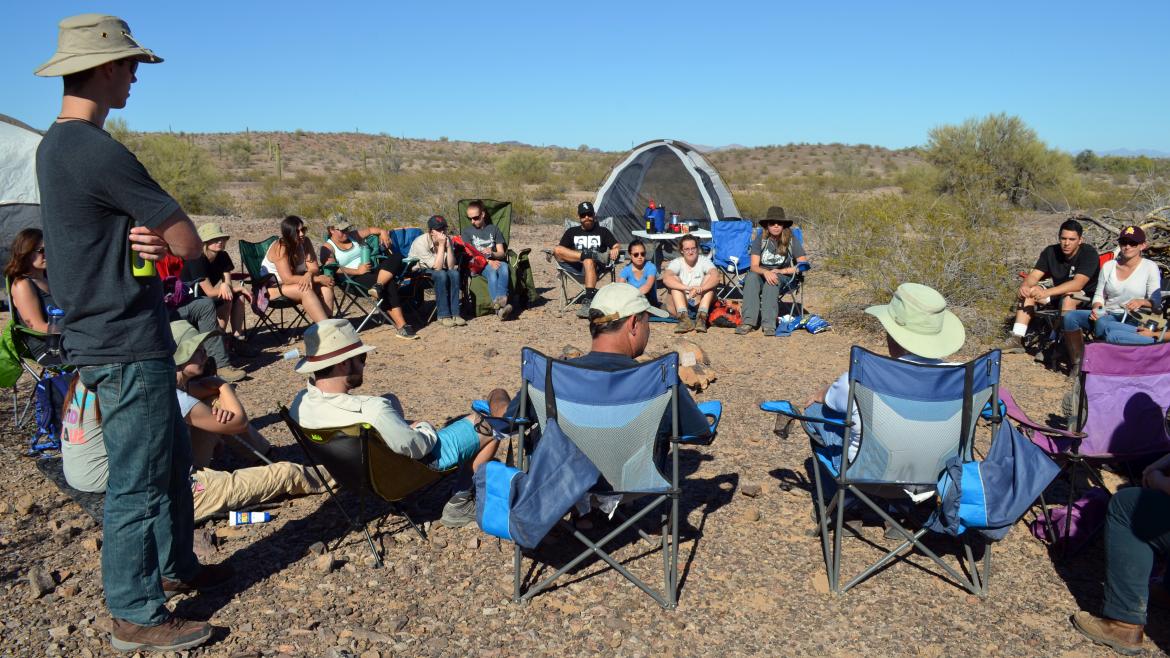 Photos and video by
Samantha Lloyd/ASU

Smith talks about ecological researchers who do computer modeling and never get out of the lab. Isn’t half the allure of the job getting out in the field?

Smith has been doing field trips “forever.” He began taking out students when he was a teaching assistant. “No one knew I was doing it,” he said. “I just did it. ...  I can’t count how many of these I’ve led.”

Smith still has the first backpack he got when he was 9. He grew up in Southern California.

“The beach was sex and drugs at the time,” he said. “So my parents — they were mountain people — let me go up to the mountains. I had them buffaloed.”

The group clambers into the vehicles and drives about a third of a mile out of camp. Out here they’ll set the carnivore traps. Smith gets five groups sorted out, each with three traps baited with bacon and sardines. “No, I want three traps for each group. Leave that trap there.”

“Kit foxes have a great sense of smell, and they can really motor,” he tells the students. They like wide open spaces where they can see predators like bobcats and coyotes a ways off, so he tells them to set a few traps in open areas.

The students file off in different directions, heading for washes and mountain slopes. “It’s a bit like herding cats,” he says, watching them go. 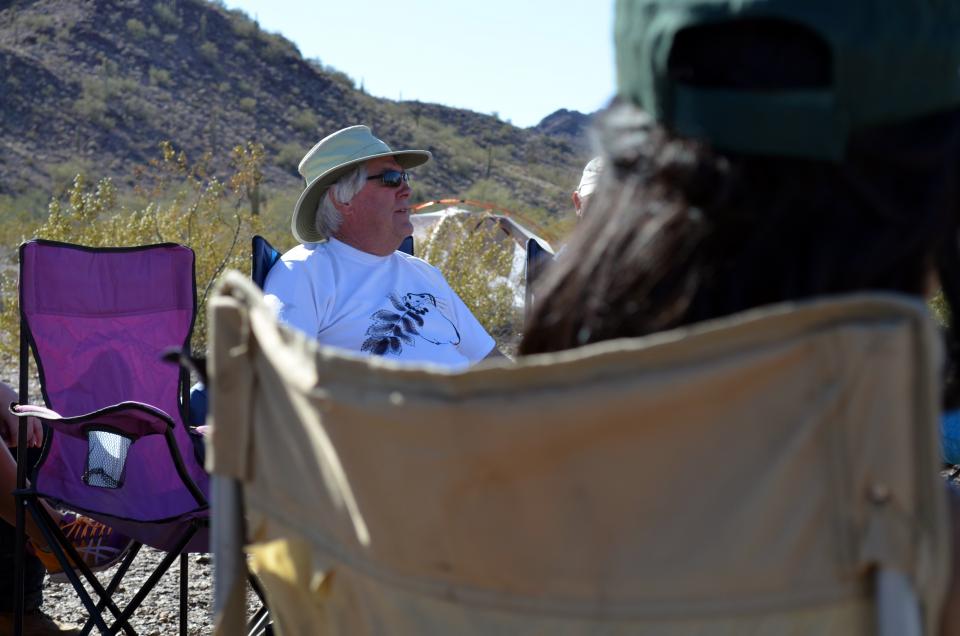 The weekend camping trip is Smith’s last time taking students out in the field to learn how to trap and handle animals for study. After 40 years, the professor who specializes in lagomorphs — rabbits, hares and pikas — but knows about pretty much any critter you can name is retiring.

It’s twilight and long shadows stripe the desert floor. The mountains begin to fade to purple.

His students have gone on to work at the Arizona Game & Fish Department, the Desert Botanical Garden, Saguaro National Park, the Phoenix Zoo and the Arizona-Sonora Desert Museum, among many other places. “Whatever we do is giving them experience to go on and do whatever they’re going to do,” he says.

“They go off in so many different directions now,” he says. “It used to be they all went to Game & Fish.”

Back in camp the fire is lit. As the group wolfs down hamburgers, hot dogs and carne asada, postdoctoral research associate Jesse Senko stands and discusses why Smith is such an inspiration to his students.

“He does it because he wants you out here,” Senko says. “Andrew cares about you guys. His whole purpose is to mentor you guys. I want to take this moment to recognize him for an incredible career. ... You want to know why you do what you do. That’s Andrew. We’re so lucky to have him. ... From pikas to sea turtles to sharks, we’re lucky to have him.”

Teaching assistant Charlie Rolsky takes a break from manning the grill. “It’s rare to find people like him,” Rolsky says. “Let’s toast him!”

In the morning, all the carnivore traps are empty except two, holding a kit fox and a gray fox. Smith shows how to remove them from the traps, and how to hold them. “Never take your eyes off the fox,” he tells the students.

The kit fox is a bit squirmy, so Smith decides to release it early. “Now I’m going to set it down, it’s going to run about 40 or 50 meters, then it’s going to stop and turn around and look at us,” he says.

“Because that’s what they do.”

Released, the kit fox performs as predicted. The gray fox being more docile, it enjoys more one-on-one time with the group before it too scurries off, having earned its bacon and sardine supper.

Stop what you’re doing and listen.What do you hear?Cellphones buzzing with incoming texts. The roar of a bus accelerating past your window. The frenzied tick-tacking of keyboards. Muffled water-cooler chatter. All of these sounds are man-made, and they make up most of what we hear every day.If we were able to mute them all at once, then what would we hear?“A bird call reflecting off of a mount... 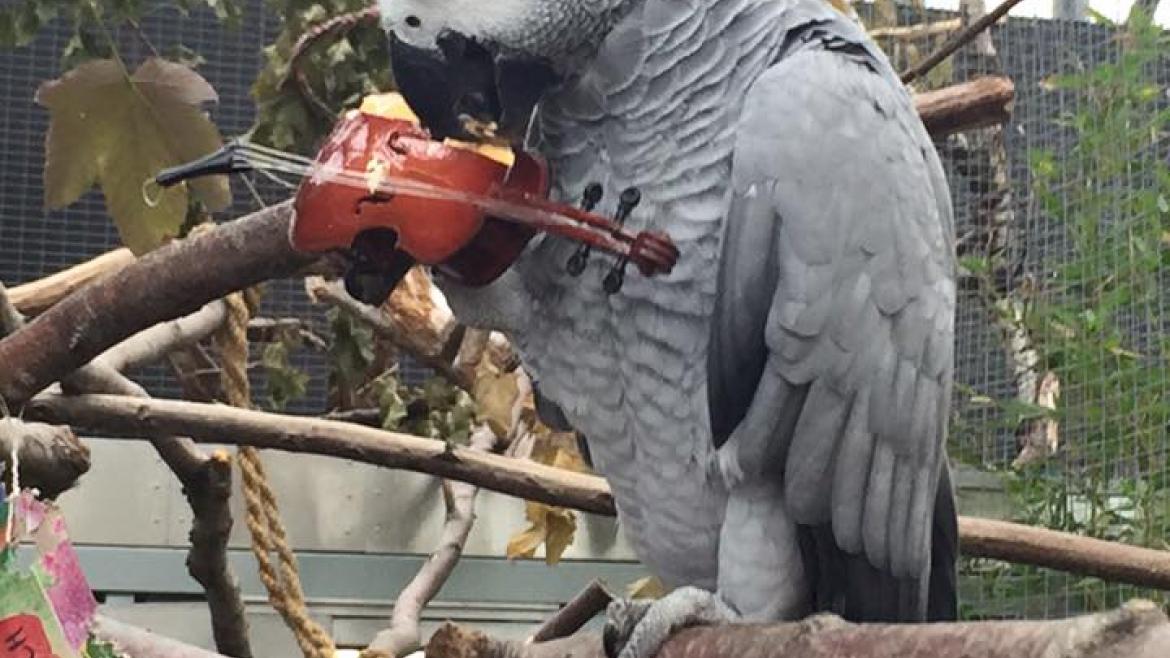 ASU prof writes on how sound can enhance, deepen humans’ experience of a space.
Parrot music project can teach us about our relationship with Earth, prof says.
April 4, 2016

Stop what you’re doing and listen.

What do you hear?

Cellphones buzzing with incoming texts. The roar of a bus accelerating past your window. The frenzied tick-tacking of keyboards. Muffled water-cooler chatter. All of these sounds are man-made, and they make up most of what we hear every day.

If we were able to mute them all at once, then what would we hear?

“A bird call reflecting off of a mountain side. Or the way wind sounds as it moves through a field of grass. Even something as small as a beetle burrowing in the sand,” mused Daniel Gilfillan.

The associate professorDaniel Gilfillan is an associate professor of German studies and information literacy in the School of International Letters and Cultures, as well as faculty affiliate in film and media studies, Jewish studies and English. The School of International Letters and Cultures is an academic unit of the College of Liberal Arts and Sciences. of German studies and information literacy at ASU has been thinking a lot lately about how sound can enhance and deepen humans’ experience of a space, especially a natural space. He’s even writing a book on it, titled “Sound in the Anthropocene: Sustainability and the Art of Sound,” and will be giving a talk on the subject, “Listening Before, Beyond, and Alongside the Human” at 2 p.m. Wednesday, April 6, for the Musicology Colloquium in the School of Music. It will be in the Music Library Seminar Room in the Music Building on the Tempe campus.

The Anthropocene is a fairly new term referring to the next geological period that we may or may not enter (it’s currently being debated by geologists), in which many geologically significant conditions and processes are profoundly altered by human activities.

What first got him really thinking about the subject was the work of a group of Austrian sound artists — Alien Productions — which played a role in his 2009 book, “Pieces of Sound: German Experimental Radio.” Since then, he has continued to follow the group’s work and took particular notice of one of their more recent projects, called Metamusic.

A unique undertaking, Metamusic is the group’s attempt to create and adapt musical instruments for 21 African grey parrots. The project recently received a three-year grant for 375,000 euros from the Austrian Science Foundation. Excited at the prospect of how the project seemed to integrate well with the context of his current book project, Gilfillan signed on to serve as a consultant.

“This Metamusic project was really intriguing to me because it engaged the relationship between sound as a sort of intermediary between humans and this group of parrots,” he explained.

Since 2012, Alien Productions — in close collaboration with zoologists, biologists and animal keepers — have been investigating how the parrots react to musical stimuli and exploring whether they are able to produce meaningful music by themselves.

As a humanities scholar, Gilfillan’s role as a consultant on the project is (as one might expect) to bring out its humanities aspects, such as “thinking about what the potential influence this three-year project might have on the human species’ ability to rethink its relationship with the other species that populate our planet.”

He recently spent some time with the parrots in Austria, observing them in their aviary space as they became more familiar with their modified instruments, such as gongs and tiny violins. Originally meant to serve as a means to alleviate boredom for animals in captivity, it became apparent that there was more to it than that.

One parrot’s story in particular spoke to Gilfillan. The parrot had been confined in a dark basement for roughly nine months before being rescued and brought to the shelter where the project was taking place. It took time and lots of positive human interaction, but he eventually began to regain confidence and the ability to engage with humans through the mechanisms of Metamusic.

That parrot’s story serves as the perfect example of how humans’ actions — or inactions — can have a profound effect on the natural environment. When we think only of other species as existing for our benefit, they often suffer as a result.

“That brings us back to the conversation about the Anthropocene,” said Gilfillan. “Do we have a chance to make the modifications we need to make in order for issues like climate change, like loss of species, [to be corrected]? Can we counteract that in some way by thinking about how art moves us into a mode of reflection or interactivity with, in this case parrots, that then teaches us something about our larger relationship with Earth?

“From my humanities perspective, not all humans are bad humans but as a species, we could create a list of pros and cons of things we’ve done throughout history that link us to bad things but also good things. We need to explore how we can continue doing more good in the world, and this is one way to continue doing that.”

Gilfillan was recently by a German radio station about the project. Click here to listen. (Another great reason to learn German, Gilfillan assures.)

Photo and video courtesy of Gilfillan and Alien Productions