ASU recognized for creating most engaging online content by Coursera

An online series of classes offered by Arizona State University has the highest combined learner rating and course completion rate for any class available on the Coursera platform. The “Teach English Now!” specialization, produced by ASU’s Global Launch, received Coursera’s inaugural Learners First award in recognition of the accomplishment.

The high ratings for the course highlight how ASU successfully made its educational offerings available to students across the globe. As a leader in online education, the university offers innovative programs for all learners.  Through programs such as ASU Online, the Global Freshman Academy and the Starbucks College Achievement Plan, ASU offers opportunities online for students to earn degrees online or develop new skills.

“ASU, as the most innovative university in the country, continues to make high-quality courses available to students around the world,” said Phil Regier, university dean for educational initiatives and CEO of EdPlus at ASU.

“Teach English Now!” is the first of two specializations that allow users to earn a TESOL certificate from ASU, enabling them to teach English to non-native speakers.  This specialization teaches students the theories associated with language learning. The second specialization provides instruction on the practice of teaching English.

“We wanted to create a space that is visually interesting and enriching for the student,” said Shane Dixon, a senior international educator at Global Launch. “With my colleague Dr. Justin Shewell, we put a lot of thought into how online instruction differs from an in-class experience to keep students engaged.”

The online TESOL certificate is part of the Global Launch’s efforts to provide students with important skills to succeed internationally. In addition to its offerings through Coursera, Global Launch brings teachers from around the world to provide them with the skills and knowledge to provide English instruction. The organization also offers programs that support international students at ASU.

“Language teachers are able to impact hundreds of students, and each student then has a broader and more complete perspective of the world,” said Julia Rosen, managing director of Global Launch. “ASU is helping prepare students to think and act globally.”

Coursera awarded ASU’s Global Launch Initiative with the inaugural Learners First award in recognition of the high-quality instruction provided to students through the “Teach English Now!” specialization. The award singles out the specialization as one of the most relevant courses to Coursera’s 18 million users out of 1,800 available classes on the platform.

Designed to free an awardee from university duties and enable undisturbed and concentrated work in Munich, this highly prestigious award will allow Page to also promote deeper ties to the scholarly community in Munich and in the foundation. 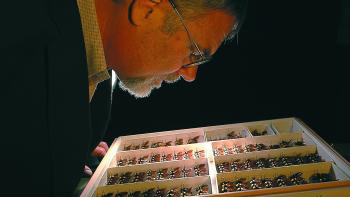 Regents Professor Robert E. Page Jr. is a world expert on honeybees and has made several landmark discoveries about their complex social interactions. Download Full Image

“Scholars are chosen from a list of those who gave outstanding talks and whose scholarly body of work and the fellowship promotes the composition or conclusion of significant work,” wrote Heinrich Meier, the director of the foundation and professor of philosophy at the University of Munich.

The foundation awarded the first fellowship in 1993. Page is only the second biologist to receive the award. The prior award winner in biology was Frans de Waal, a famous primatologist.

“Page is a world expert on honeybees and has made several landmark discoveries about their complex social interactions,” said Bertram Jacobs, director of the School of Life Sciences. “The fellowship creates an opportunity to expand the impact of his discoveries and communicate with a broader public audience.”

He has authored hundreds of articles and five books, including “The Spirit of the Hive: The Mechanisms of Social Evolution” based on his study of bee genomics and evolution and published in 2013. The “Spirit of the Hive” developed from an Ernst Mayr Lecture that Page gave to the Berlin-Brandenburg Academy of Sciences and Humanities in 2009.

Page sees the Siemens fellowship as an unparalleled opportunity to pursue a range of creative endeavors, including a second book on his favorite topic, social insects.

“I told Katharina Biegger, the scientific director at the Wissenschaftskolleg Zu Berlin, that I was writing ‘The Spirit of the Hive’ for her and the people who worked in the reception office; educated people with broad interests but without specific deep knowledge of biology,” said Page. “However, in the end, the ‘Spirit of the Hive” was too technical. It was for experts.

“I’d like to try this time to write a book for people who have a basic understanding of biology, to talk about the complexities of social evolution and simplify it. Since I’m not a naturalist, I want to go back to philosophers, such as John Locke and Jean-Jacques Rousseau, and look at the formation of political theory and basic social theory. I’d like to explore how the social contract laid out by these early political theorists — touching on loss of independent freedom, loss of reproductive ability, policing and enforcement — might also be applied to honeybees.”

Page’s research ties in Germany emerged from his longstanding personal ties in Europe. While in the Army, he was assigned to U.S. Army Europe Headquarters in Heidelberg, Germany. There, he met his future wife, Michele, married and had their first child. Their close relationship with the country and her people continued even after their return to the U.S., where he pursued his BS and PhD degrees, courtesy of the GI Bill.

Seven postdoctoral fellows from Germany have trained with him, including Jürgen Gadau, now a professor with the School of Life Sciences. Page has returned to Berlin every summer since 1996 to connect with colleagues who are also working in the fields of neuroscience and behavior. In addition, Page and Manfred Laubichler established ASU’s first “global classroom” in Europe in coordination with Leuphana University. Germany’s Mercator Foundation funded the project.

Page was the founding director of ASU’s School of Life Sciences and he established the Social Insect Research Group and ASU Honey Bee Research Facility. In addition to serving as university provost, he was vice provost and dean of the College of Liberal Arts and Sciences. In 2011, he also founded ASU Night of the Open Door, a series of public events at ASU that attracted more than 30,000 members of the community to ASU in 2016. Prior to coming to ASU, Page was with Ohio State University and University of California-Davis, where he chaired the Department of Entomology.

In the U.S., Page’s honors include being named a fellow of the American Academy of Arts and Sciences, and of the American Association for the Advancement of Science and Entomology Society of America. In Germany, he received the Alexander von Humboldt Senior Scientist Award (the Humboldt Prize), the highest honor given by the German government to foreign scientists. He’s also an elected fellow to Leopoldina — the German National Academy of Sciences and the longest continuing academy in the world, as well as to the Brazilian Academy of Sciences.

Along with an endowment, the Siemens fellowship offers an apartment and subsidy for living expenses and travel within Germany, in addition to travel to and from Germany from ASU.

The Siemens Foundation is housed in one of the villas of the Nymphenburg Palace, the equivalent of a “Bavarian Versailles” in Munich. The foundation supports knowledge creation in fields other than science, including humanities, public awareness of science, grants to libraries in Germany and other programs.

The School of Life Sciences is an academic unit in the College of Liberal Arts and Sciences.